Whether on top of a carbonara or mixed into a hearty pie, pepper and salt are two types of seasoning that go hand in hand – so it should come as no surprise as to why they’re a common fixture on dinner tables across the globe. But, what if you don’t have any white pepper at hand?

White pepper is ideal for dishes that require a peppery taste without the sight of black flecks. Dishes such as white sauces often call for white pepper. However, tastewise, white pepper has a different flavor from black pepper, as it’s often a bit milder with a flavor that’s less complex.

There are also a few health benefits from consuming white pepper, such as treating upset stomach, improving breathing, reducing pain, and reducing inflammation. The benefits are due to the presence of a chemical known as “piperine,” which also has improved cognitive function; however, scientists are not quite sure why. 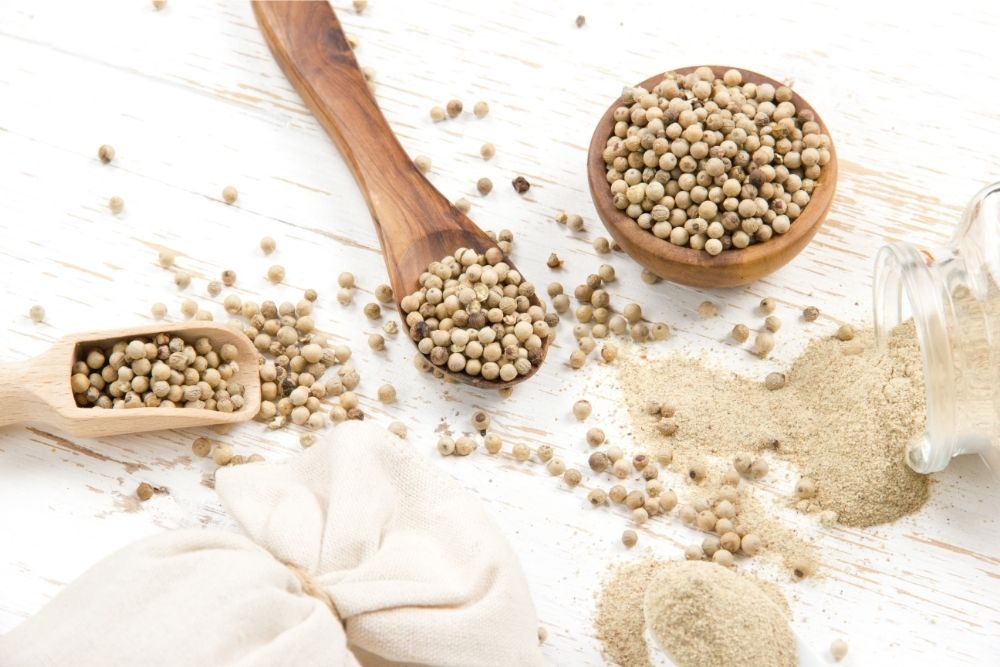 Similar to black pepper, white pepper can be used in a variety of different food recipes, although it is most commonly used as the final step as a type of garnish. Its subtly fiery flavor is the perfect way to add a little kick to your food dish without overpowering the other ingredients. So, if your recipe is calling for a sprinkling of white pepper and you either don’t have it laying around in your kitchen cupboard (or simply just don’t want to use it), then there are a variety of white pepper substitutes available for you to use, and we’ve listed the best alternatives below. Ready to discover them? Just read on!

What is White Pepper and How is it Used?

White pepper is, believe it or not, a type of spice that is created from the dried fruit of something known as the pepper plant. Unlike black pepper, white pepper tends to be a lot milder in flavor and less potent. White pepper is made from ripe pepper berries and undergoes a fermentation process that consists of soaking the berries in water for a duration of around 10 days or so.

After which, the skins of the ripe pepper berries are then removed in order to rid the berries of the hot piperine (otherwise it would be just as strong as black pepper).

This unique process then means that white pepper has a completely different flavor profile to that of black pepper, and is a lot more mellow, which makes it a popular choice for those that still want a kick to their food, but don’t want it to be so powerful that it overwhelms the other ingredients of the dish.

If you want to achieve the same earthy and slightly fiery flavor profile of white peppercorns without actually using them, then you’re going to need an alternative! Check out the best substitutes below: 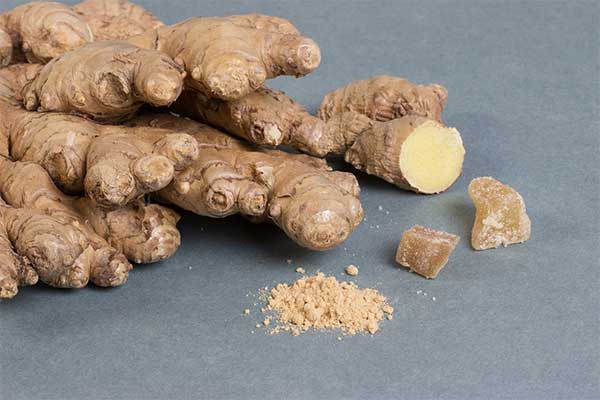 One of the most popular alternatives to white pepper is the use of ground ginger. Not only does ginger offer a similar flavor profile to that of white pepper, but it also has a pale, burnt orange appearance that won’t be noticeable when used in a dish.

This means that you could choose to use ground ginger both while cooking, as well as right before eating, as you can sprinkle it over the top of your food to give it a little extra kick without bringing the overall appearance of the meal down. Depending on your taste preference, you might find yourself reaching for ground ginger for a variety of different foods. However, if it’s your first time using it, then you’ll likely find that ground ginger works best with aromatic Thai and Asian cuisine, as the unique flavor of ginger complements the ingredients commonly found in these dishes. Regardless of that, though, ground ginger smells absolutely delicious and will be able to enhance any dish with a subtle spiciness that we’re positive will have your guests and family asking you what the secret ingredient is! 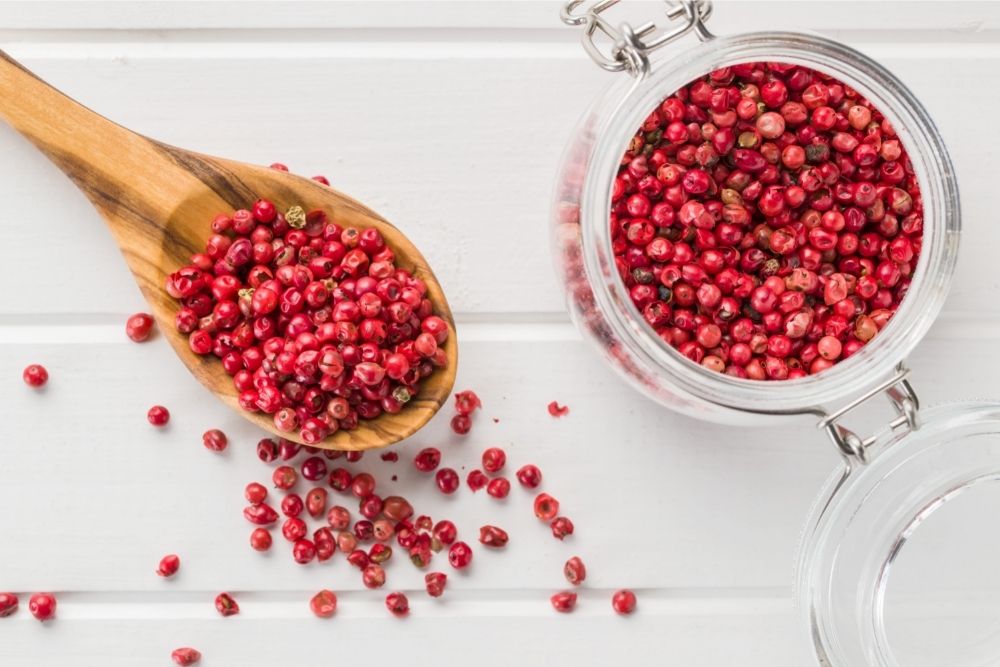 If you don’t want to use white pepper and don’t like the specks that come along with using black pepper in a dish, then an alternative you could consider that is still within the pepper family is pink peppercorns that have been grounded. Generally speaking, the flavor profile of pink peppercorns is very similar to that of white peppercorns, except that pink peppercorns are slightly milder than their peppercorn counterparts, and also have a less potent aroma.

Pink peppercorns undergo the same fermentation process that white peppercorns do, and they also have their oils distilled and hot piperine removed in order to allow for a subtle and less fiery flavor. They are also native to Peru and Chile. If you want to use pink pepper in place of white pepper, then you can use it in the exact same way you would usually use white pepper. Sprinkle it over the tops of your dishes or mix it into sauces for a mild yet slightly spicy edge to your food. 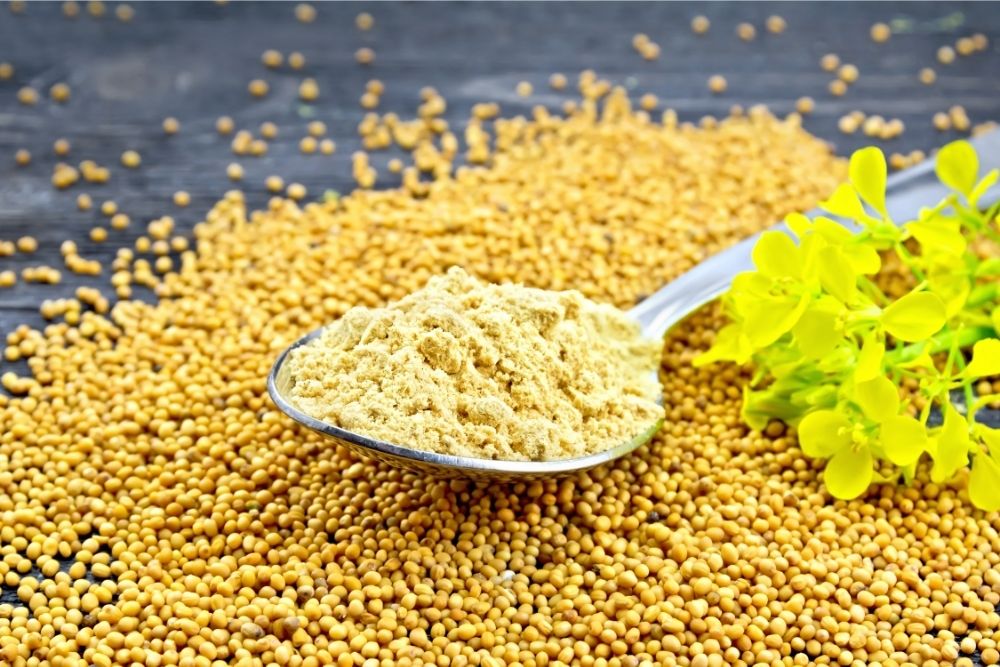 Mustard powder (or ground mustard) is another alternative that you could use instead of white pepper. It’s worth keeping in mind that though the flavor is somewhat similar to white pepper, the mustard powder will most likely leave a subtle mild yellow color across your food, especially if you sprinkle it on top right before serving.

Ground mustard powder has quite a fiery flavor, and can sometimes be slightly more powerful than white pepper, although this depends on the amount that you have used. It complements meat and cheese dishes the most, although you can use it in just about anything you like. If you are planning on using mustard powder in your food instead of white pepper, then we recommend starting off with a small amount and then taste testing. By doing this, you will be able to add more if need be, while also ensuring that you are not using too much and overpowering the rest of the ingredients. 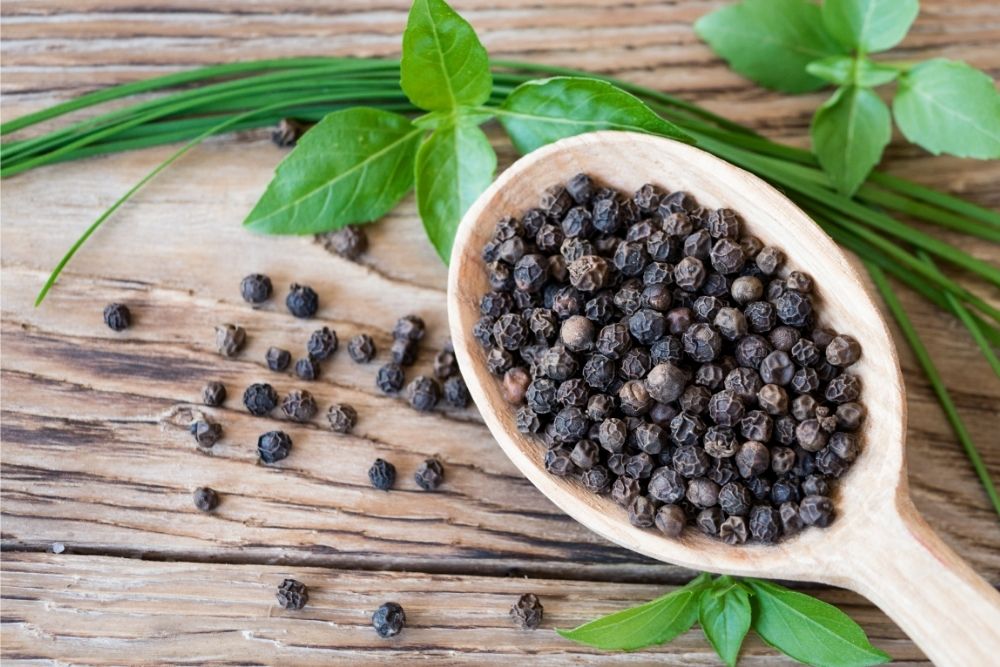 If you’re finding that white pepper isn’t strong enough for your liking, then we recommend swapping it out for black pepper powder or ground black peppercorns.

Black peppercorn is a lot stronger than white pepper, and this is due to the way that it is prepared. After fermentation, black peppercorns do not get their hot piperine or oils taken away, which allows for a full-bodied flavor and punchy aroma. For this reason, if you are looking for something with a little more kick than white pepper, then we strongly recommend using black pepper instead. Black pepper is one of the most common types of pepper (alongside white pepper) which means that it can be used across a variety of different dishes, including cheese, fish, meat, and more. If you plan on using it in your food, however, we do recommend making sure that you start off with just a small pinch of pepper and then add more if needed, as black pepper can quite easily overwhelm the dish. 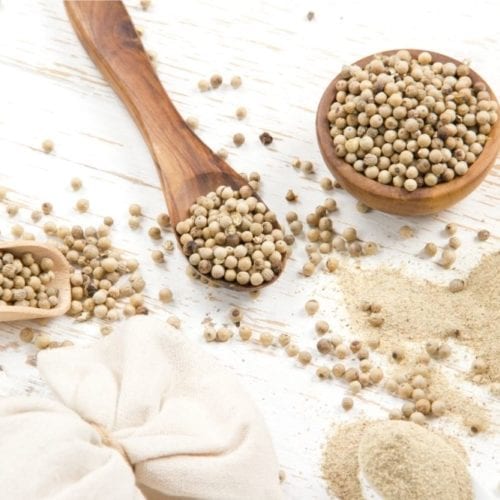 These options are sure to be a hit. So, gather your family and friends and enjoy. Let us know your thoughts!
4.86 from 7 votes
Print Recipe Pin Recipe
Total Time 9 mins
Course Substitute
Cuisine American
Servings 4
Calories 133 kcal

Calories: 133kcal
Keyword white pepper substitutes
Tried this recipe?Let us know how it was!