Homemade spaghetti sauce can be difficult to master. Though it is typically listed in the majority of cookbooks, there may be instances where your sauce turns out much more watery than you were anticipating.

Contents show
Use the boiled water from the pasta
Add Cornstarch to the sauce
Make a roux
Add some mashed potatoes
Change the ratio of solids and liquids
Increase the solids content of the sauce
Reduce the liquid content
Using Proteins
Add some cheese
How to prevent spaghetti sauce from going watery
Final Thoughts
Related Posts:

To create spaghetti sauce, tomatoes are combined with a few other staple ingredients to enhance the flavor.

Some people may opt for shop-bought varieties under the assumption that they have a better consistency, however, there are ways of saving a homemade spaghetti sauce, using a thickening ingredient. Homemade tomato sauce or tomato paste can be thickened. To thicken pasta sauce or thicken tomato sauce just follow the directions below. It may be as easy as corn starch to thicken sauce. Give it a try.

How to thicken pasta sauce? If your spaghetti sauce requires thickening, you will be pleased to know that there are several easy remedies that you are likely to have readily available in your kitchen cupboards.

These same techniques can be used to thicken any tomato sauce. 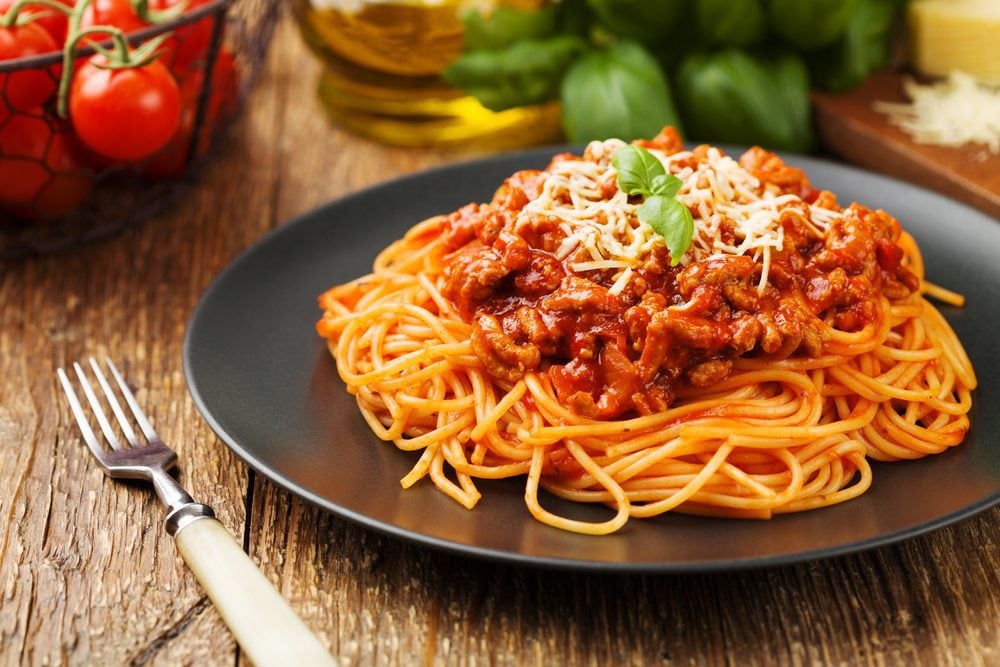 Use the boiled water from the pasta

Water is typically added to a sauce that is too thin, however, pasta water is an effective thickening agent.

This is because as it boils, it will release starch. Once your pasta has cooked or nearly cooked, you can take a few teaspoons and add them to the pan containing the sauce.

Initially, after adding the water you may notice that the sauce is a little watery, however, as you stir it you will notice that it thickens. Continue to stir it until you feel as though it has reached the desired consistency.

A great thing about this option is that it doesn't require the use of any additional resources. You will require a saucepan for the sauce, a pasta strainer, and a spoon.

Add Cornstarch to the sauce

Cornstarch is a common ingredient in many foods. It derives from corn grain and is often used as a thickening agent.

They do so through a process of gelatinization. When exposed to heat, the starch molecules swell and absorb any excess water in a liquid mixture or solution. As such, the liquid will eventually begin to thicken.

It doesn’t have an overpowering taste and it can easily be added directly to the sauce without needing to be mixed thoroughly beforehand.

You can either stir a small amount into the sauce before allowing it to cook for a couple of minutes, or you can create a slurry by mixing a 1:1 ratio of cornstarch and water.

Once it has developed a smooth consistency you can mix it into the sauce as it simmers. Allow the sauce to cook for a further 2 minutes until it has reached a thick consistency.

Though it works fairly quickly, do not be too hasty in adding more to the sauce. When you are satisfied, you can then remove the sauce from the heat.

Again, you don’t require a lot of additional tools for this method apart from the cornstarch, water, a bowl, and a fork to mix it with.

Roux is made from a mixture of flour and fat (typically butter) which are combined in equal parts and then cooked together. This is a slightly more advanced option that requires more effort on your behalf.

You will also need to cook it for some time until it loses its floury taste.

As the roux simmers, slowly mix in your spaghetti sauce and let it cook until the texture becomes visibly thicker. The sauce is likely to take around 30 minutes to cook. It is also worth noting that due to the flour, the taste of the sauce may be altered slightly.

To make the roux, you will require butter and flour. You will also need a large pan, and a whisk to stir the mixture.

Although this may seem a little peculiar, mashed potato is actually a powerful thickener. This is because potatoes contain a lot of starch so it will work in a similar way to the cornstarch method.

The potatoes will alter the taste of the sauce creating a rather unique flavor, therefore it isn’t recommended for those who dislike potatoes.

If you have any leftover potatoes available, you can mash these together. Alternatively, you may peel a potato and put it in the microwave until it feels soft. Gradually, add the potato to your sauce until the texture of the sauce thickens.

Some may wish to add some milk or butter to the mashed potato before adding it to the sauce.

Very few resources are required for this method. You will simply need a potato and a fork to mash it together.

Change the ratio of solids and liquids 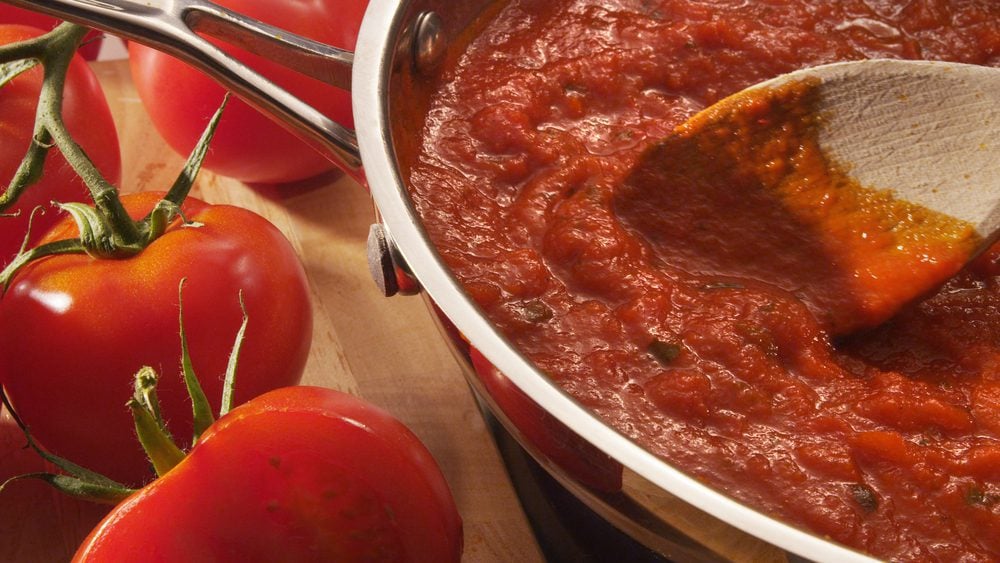 Spaghetti sauce is pretty versatile and because of this, you can add a variety of vegetables to it such as peppers, carrots, and onions, etc. Essentially, adding vegetables will increase the volume of sauce so that it outweighs the liquid.

To begin you will need to add your desired vegetable that has either been pureed or cut into fine pieces to the sauce as it simmers.

You will need to stir it and allow it to cook until the vegetables are soft. The amount of time that this method will take depends on the size of the vegetable that you opt for.

For this option, you will require the vegetable that you have chosen for your sauce and a blender if you have decided to puree it.

If your sauce is more watery than you would like, one of the easiest options is to reduce the amount of liquid that is in the saucepan. You can do this by boiling the sauce for a further 20 minutes.

Once this time has passed, the sauce is likely to contain less liquid and will therefore have a thicker texture.

To speed up the process, you can remove the lid from the pan whilst it boils. Should you do so you will need to keep a close eye on it to make sure that it doesn’t create a mess.

Aside from this, you will also need to stir it for the duration of time that it is cooking to prevent it from burning and sticking to the bottom of the pan.

Add the sauce to a blender

If you have a blender available, you may wish to try this option. By turning the sauce into a puree, it will become much thicker. This method is fairly self-explanatory.

Add your sauce to the container and then blend it until it reaches the desired texture. Stop the blender occasionally to check whether the sauce is ready.

Aside from starches, proteins can also be used to thicken a spaghetti sauce. Following exposure to heat, the protein will release hydrophilic moieties that will bind to the water.

Add egg yolk to the sauce

Egg yolks are an effective sauce thickener. Rather than adding the egg yolks directly into the mixture, first, you should mix a small amount of the egg with the sauce. Doing so will ensure that it doesn’t cook too quickly and turn into scrambled eggs.

Following this, you can gradually combine the rest of the sauce with the eggs.

You must make sure that the eggs are cooked gently and stirred frequently throughout the time that they are cooking. For this method, you simply require a maximum of 2 eggs and a whisk and bowl.

You can also use grated cheese to thicken your sauce. Using soft cheese is quicker because it will take less time to melt when cooking on a low heat.

The cheese that you use will be determined by your preference but it is important to note that adding too much cheese can leave the sauce with a salty taste.

First, you will need to grate your cheese if it isn’t already done, then you can add it directly into the sauce. Stir your sauce until it reaches the desired consistency.

How to prevent spaghetti sauce from going watery

First, you will need to identify the source of the problem so that you know what needs to be improved on. Many people forget to drain their canned tomatoes before adding them to the sauce.

Should you decide to use fresh tomatoes, be careful with your selection. Ideally, you should use those that aren’t going to release a lot of water.

Sometimes, the watery texture is not caused by the sauce but pasta that has been insufficiently drained.

As you can see many techniques are effective in thickening pasta sauce. It is likely that you will need to experiment with your chosen method to ensure that it creates a tasty sauce that has reached your desired consistency.