When you think of an octopus, you probably imagine a sea monster rising from the depths of the ocean. But did you know that, when it is cooked correctly, octopus can also make a delicious and mind-blowing dish?

Contents show
How Good Does Octopus Taste?
How To Choose The Best Octopus?
How To Spot “Fake” Octopus?
Raw Or Cooked?
How To Cook Octopus Correctly?
How To Enjoy Eating Octopus?
The Different Types Of Octopus
Related Posts:

We understand that some people may cringe at the idea of ordering a plate of tentacles to the table. So if you’ve ever wondered what octopus tastes like, but are too scared to try the actual dish, we’ve got you covered.

Down below we have compiled together some handy information all about preparing, cooking and eating octopus. So why not check it out and decide for yourself if this particular seafood is the right one for you! 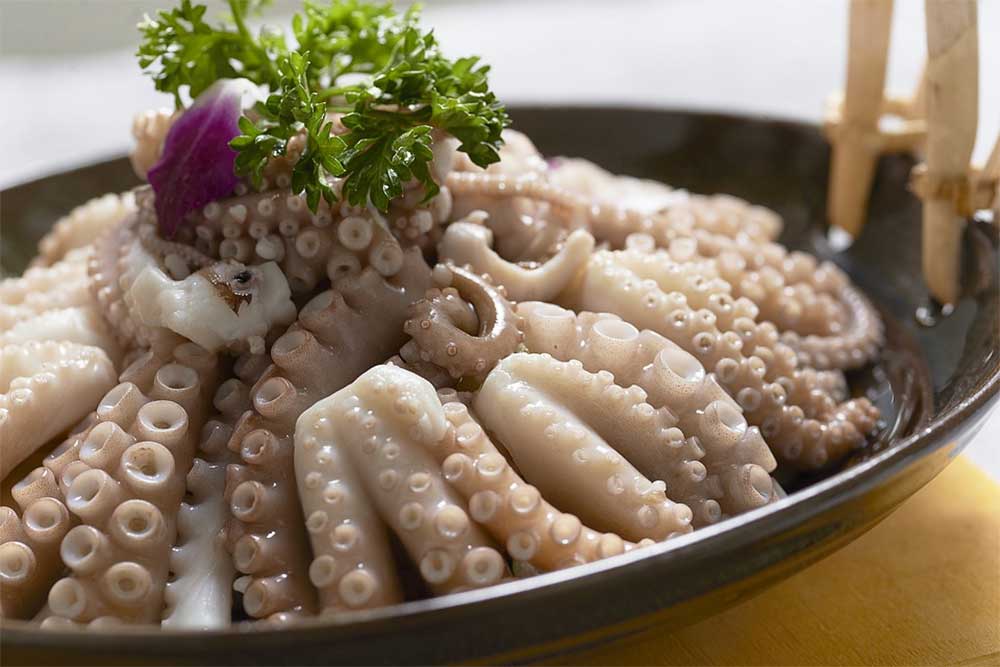 How Good Does Octopus Taste?

The answer to this question relies primarily on how the octopus has been prepared. For example, a well-cooked octopus has a very similar taste and consistency to lobster. When cooked properly, octopus has been known to take on the same smell and texture as the decadent shellfish. However, its flavor is not as powerful and often the meat of the octopus will be influenced by the ingredients used when cooking it.

Octopus is also seafood that can be enjoyed cold and raw, and we advise giving this a try if you are ever given the chance. When served raw, octopus takes on a tougher consistency than when it is cooked. And admittedly the octopus itself has very little flavor, that is why many restaurants will often serve the fish with sauce for some added zest.

How To Choose The Best Octopus?

So, after that, are you now interested in preparing your own octopus dish? If so, then you need to make sure that you find the best octopus for the job. Seafood markets are an ideal place to purchase octopus. However, they do come with their positives and negatives and they may not have the freshest stock available. To make sure that the octopus you're purchasing is fresh, there’s only one thing you can do - smell it!

Please remember that cooking fresh octopus will make the meat shrink, so you have to make sure you buy enough for yourself and your loved ones. Two to three pounds of octopus is usually enough to feed four people.

Personally I try to avoid octopus ink or squid ink though I know some find it a delicacy. I do enjoy grilled octopus and calamari.

How To Spot “Fake” Octopus?

When purchasing octopus, you have to make sure that you are not wasting your money on “fake” octopus instead. Unfortunately, some fishmongers have begun selling different fish by pretending that it is octopus, which can lead to confusion and stress. Giant squid tentacles are often sold under the pretense that they are octopus, even though they are much larger and do not taste the same.

We understand that it can be difficult knowing what you are buying, especially when the fishmongers themselves are trying to mislead you. That is why we always suggest reading the labels before adding anything to your basket. Otherwise, you could find yourself going home to prepare the wrong fish for dinner.

If you are still unsure if the tentacles or slices you are purchasing are octopus, then we suggest buying a whole octopus instead. This will help to lessen the confusion, as a whole octopus is more distinctive in its look and appearance.

If you intend to cook your octopus at home, then you may be thinking of purchasing a raw octopus. However, we do advise against this as raw octopus can be extremely difficult to prepare. You don’t want to end up with undercooked octopus, because it can be very rubbery and difficult to eat. If you want to make an octopus dish at home, we suggest buying the fish precooked.

When purchasing raw octopus from a seafood market, it will be sold in its casing, which can be unpleasant and complicated to remove. If you buy cooked or frozen octopus, then the fish will already have been gutted and cleaned. This will save you the effort of trying to clean the octopus yourself at home. Frozen octopus is especially good, for it has a longer shelf life and can be easier to work with.

How To Cook Octopus Correctly?

If you are working with a raw octopus you will first need to clean and gut it before starting cooking. Cleaning any fish is a meticulous process that can use up a lot of time and effort, that is why we suggest buying a pre-prepared frozen octopus when preparing a dish from home. However, if you insist on cleaning your octopus, then it should resemble a deflated balloon with tentacles once complete.

Octopus can be a very dense fish, and many methods can be used to soften the meat. However, the simplest method involves dipping the octopus in water before cooking it in a pan with some red wine. This method can take 30 minutes to 4 hours depending on the size and amount of octopus you wish to prepare. To check if the octopus is cooked, you can insert a knife or fork into the thickest part of the body. If the utensil goes in without resistance, then the octopus is ready to be served.

How To Enjoy Eating Octopus?

A common misconception surrounding octopus is that its natural flavor is strong enough to carry the entire dish. However, this is not true as octopus has a relatively weak and unremarkable flavor. This is why octopus is often served with a sauce or garnish so that the flavor can be elevated and heightened.

For example, in Japan octopus is often prepared with thin slices of ginger and cucumber before being cooked in vinegar and soy sauce. While a traditional Korean custom involves dipping the octopus in sesame oil before topping it with red pepper and crushed garlic.

It is important to remember that octopus on its own may not deliver the rich and fishy flavor that you were looking for. Always prepare your octopus with a range of flavorful ingredients and you will see some amazing results.

The Different Types Of Octopus

There are many species of octopus in the world, but only a small selection are completely edible. Down below we have made a list of some of the best types of octopus that can be used for cooking.