Sashimi and Sushi are two delicious Japanese delicacies, however, they’re often confused with each other.

Both of these dishes contain raw fish and are usually served with a soy dipping sauce. 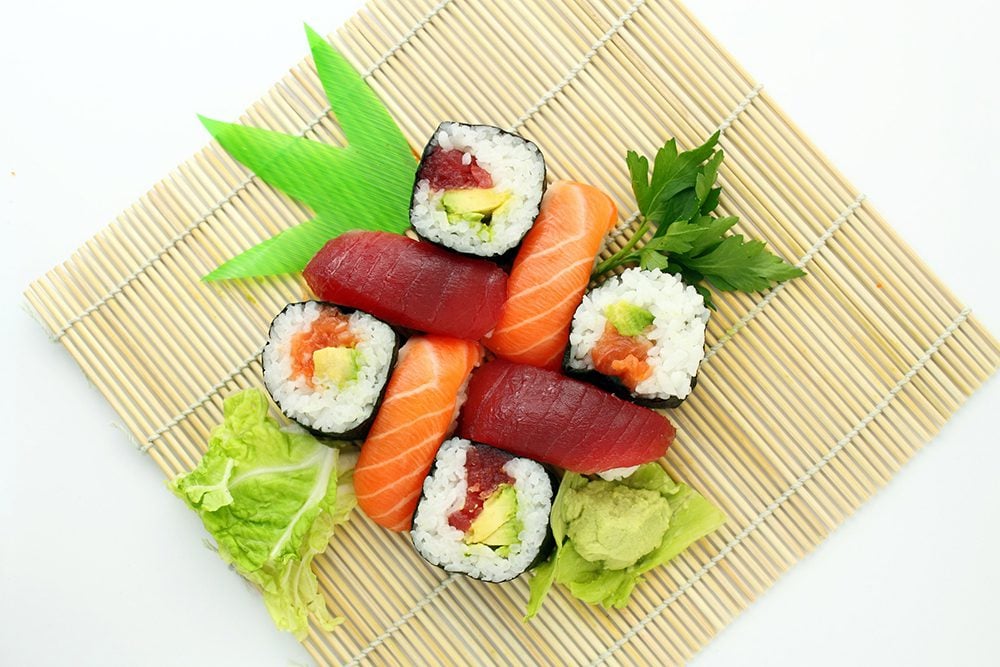 What Does Sushi and Sashimi Mean?

So ‘sushi’ roughly translates to ‘vinegared rice.’ ‘Sashi’ on the other hand, means to pierce or stick, while ‘mi’ refers to meat, so Sashimi translates to ‘pierced boy’, which was probably derived from the practice of serving fish meat alongside the fin and tail, in order to identify the meat being eaten.

Sushi can be made from raw or cooked fish, and some variations may feature different types of vegetables rather than seafood.

There are lots of variations in how the ingredients and the rice can be combined, however, ultimately, sushi needs to have rice in order to be classed as “sushi.”

Sashimi refers to how the food is served, and the dish primarily consists of fresh and raw fish sliced into thin pieces and served alongside a dipping soy sauce. Sashimi on the other hand doesn’t contain rice.

Sashimi is usually raw sliced seafood, although occasionally it can be made out of other meat, like slices of raw beef or horse.

Sometimes the seafood is cooked, as in the case of octopus sashimi, while others might be lightly seared, like katsuo.

How is Sushi and Sashimi Served?

Sushi is frequently eaten by itself, though it is often served alongside a Japanese soy sauce called ‘shoyu’, which the sushi is dipped in or drizzled with.

Sashimi, on the other hand, is only served with a dipping sauce. Sometimes the soy sauce is mixed with wasabi paste, which is not usually done with sushi.

You’ll often find that the sliced seafood is served atop a garnish, usually white radish, which is known as Daikon radish.

Don’t get us wrong - both Sushi and Sashimi are relatively healthy, as fish is a great source of protein. On average a piece of Sashimi will contain in the region of 20 to 60 calories depending on the type.

Sushi rolls can be far more calorific, ranging from 200 to 500 calories. A piece of Nigirizushi will usually contain between 40 to 60 calories.

It’s the rice that contains the most calories in sushi, as this is mixed with vinegar and salt, but also a good amount of sugar, which is what ramps up the calorie content.

However, Sashimi is the healthier of the two, as quite often sushi can contain fried ingredients or mayonnaise, which adds to the fat content, as well as the white rice and sugar.

Sashimi is simpler and is mostly just fresh, raw fish. You can ensure sushi is as healthy as possible by making it with brown rice and non-fried, fresh ingredients.

Both sushi and sashimi are most commonly made from seafood, and this is the defining ingredient of both dishes.

Both dishes make use of seafood such as salmon (sake), yellowtail (kanpachi / hamachi), scallop (hotate), or octopus (tako).

While you may easily find Akami sushi - which is of the lowest quality - you’ll rarely stumble upon Otoro sushi. However, all grades of tuna (Maguro) are commonly prepared as sashimi.

The most common variation in Sashimi is the type of seafood or meat used, but there are also variations in how the meat is cut.

How the meat is cut actually depends on what meat you order, as the cut will depend on the properties and texture of the meat.

The most common is the hira-zukuri cut. This involves cutting the meat into a rectangular slice that is roughly 2 inches by 1 inch and about 3/8 inches thick.

You’ll also see thinner cuts, for example, pufferfish is usually sliced so thin you can see through it, whereas other types of fish may be cut into small cubes.

There are far more variations of sushi, and here are a few of the main ones:

This is the type of sushi you probably picture as soon as you hear the word ‘sushi’ - it usually contains salmon or squid inside a ball of vinegared rice.

This is some sushi rice wrapped with seaweed in a cup shape, then filled with ingredients like roe.

Makizushi is when the rice and ingredients are wrapped up in seaweed (nori).

It’s sometimes shortened to “maki”, and this is the second most common sushi in the west, usually resembling a “sushi roll.”

There are several variations of Makizushi:

Uramaki – A relatively new version of makizushi, this is when the ingredients are wrapped in nori and then in rice.

Futomaki – These are thick rolls with seaweed on the outside and lots of ingredients stuffed inside.

Hosomaki – These are thinner rolls and are more like a mini sushi roll. They have seaweed on the outside, but few ingredients inside.

Temaki – This is when the sushi is rolled into a cone shape, resembling a miniature ice cream cone.

Inarizushi is sushi rice packed into a fried tofu pouch, which resembles a little bag with all the ingredients stuffed inside.

This is a dish best suited to those who can’t make up their mind. It’s a bowl of sushi rice topped with a selection of Sashimi, so you get the best of both worlds.

What is the difference between sushi and nigiri?

Nigiri is a variation of sushi. Sushi refers to rice prepared with vinegar, served with additional ingredients such as raw fish or vegetables. Sushi is a traditional Japanese cuisine, and it comes in a wide range.

Nigiri is a thin slice of raw fish, draped over the flavored vinegar rice. It’s a small item, able to be picked up easily with two fingers or chopsticks. Nigiri isn’t rolled, instead it’s laid flat and served chilled.

The flavor of the fish combines with the rice, to make a delicious bite sized dish. The best nigiri is traditionally made of firmer fish such as salmon, bluefin tuna, and halibut. Nigiri is often confused with sashimi, but they’re different.

Sashimi also uses raw fish, but without the important addition of rice. Where rice is a foundation of nigiri, it isn’t used at all in sashimi.

What is sushi vs sashimi vs maki?

Sushi, sashimi, and maki are all different terms, even if some use them interchangeably.

Importantly, maki is a type of sushi, where sashimi is not. Sushi is vinegared rice, served with raw fish or vegetables. There’s a lot of variety within sushi.

Maki is one of the most popular forms of sushi, and what many of us picture when we hear the word sushi. Maki is made of fish or vegetables, layered onto sushi rice, and rolled in sheets of seaweed nori.

It’s similar in ingredients to nigiri, but nigiri is served flat. Rice is an essential part of any form of sushi, and what sets sashimi apart is that it doesn’t contain rice.

Instead, sashimi is thin slices of raw fish or meat, generally served with soy sauce. All options are nutritious, and often low calorie. Not to mention they taste fantastic.

Is the salmon in sushi raw?

Yes, the salmon in sushi is normally raw (although some restaurants do serve sushi with cooked salmon). Thinly sliced raw salmon has a unique texture, which almost melts in the mouth.

Combined with the seasoned sushi rice, this makes a fantastic flavor profile. The salmon is safe to eat because of the way it’s cooked and frozen.

The salmon used is specifically labelled ‘sushi-grade’, to show that it’s safe to be eaten raw. Salmon used for sushi is caught and bled quickly, and gutted soon after. It’s then iced, and either flash frozen or frozen for a long period of time. This is done to kill parasites, so the fish can be eaten raw.

For those unsure about eating raw salmon, it’s similar in texture to smoked salmon. The thin slices are bite size, very different to the fillets you may be used to.

What is the difference between sashimi and raw salmon?

Raw salmon is used in sashimi, but that’s not all sashimi is. The salmon used for sashimi is ‘sushi grade’, meaning it’s been gutted and frozen in a way to eliminate parasites and make it safe to eat.

The salmon is then thinly sliced, and served as is with a dab of soy sauce as a flavor enhancer. Raw fillets of salmon that are commonly found in supermarkets don’t go through the same freezing process, needing to be cooked longer to kill the parasites.

Sashimi isn’t exclusively salmon, although salmon is a popular option. Sashimi refers to any type of thinly sliced and uncooked fish, and even meat.

The most common sashimi is salmon or tuna, but octopus, squid, and shrimp are also popular. There are meat varieties of sashimi, but these will often be boiled or braised to ensure safety.

We hope you’ve enjoyed learning about the differences between Sushi and Sashimi.

While both are much-loved Japanese delicacies, there are several differences between the two, and it can be helpful to know these before trying Japanese food or dining at your favorite sushi restaurant.

The main difference between Sushi and Sashimi is that while they both contain seafood as their main ingredient, Sushi contains vinegared rice, and without this, it cannot be classed as sushi.

Sashimi is usually served on a garnish and can feature higher quality ingredients than Sushi, which can mean it’s sometimes more expensive.

Sushi can also contain ingredients such as sugar or mayonnaise, which makes it a slightly unhealthier choice than Sashimi, even though it primarily contains fish.

Ultimately both of these dishes are delicious and we’d encourage you to try a selection of both Sashimi and Sushi next time you visit a Japanese restaurant.

We hope this article better prepares you for identifying the differences between Sushi and Sashimi next time you’re sat at a conveyor belt with a myriad of Japanese foods passing you by!