Boston Sushi Rolls are pretty similar to California rolls in the way that it’s a type of rolled sushi made of seasoned rice, green vegetables, but instead of containing crab, the Boston sushi roll contains poached shrimp.

Contents show
What is a Boston Sushi Roll made out of?
How to make Boston Roll Sushi
Preparing your veggies
Cook your rice
Poach your shrimp
Preparing your sushi roll
Can I use something else to substitute tobiko?
What nori sheets are best to use for this recipe?
What kind of shrimp is best to use for Boston Roll Sushi?
How do you know when an avocado is ripe enough for Boston Roll Sushi?
How to prevent your sushi roll from falling apart
What can I use instead of a bamboo mat?
Our BEST Boston Sushi Rolls
Equipment
Ingredients 1x2x3x
Optional Ingredients
Instructions
Nutrition
Related Posts:

The Chinese symbol for sushi is believed to have its origins in the translation of foods that are made with fish. Later, the symbol for sushi became one that indicated that the fish was pickled with salt and rice. Thanks to globalization, sushi became available and popular with people from all over the world.

However, in Japan, sushi was introduced somewhat differently. This early sushi was known as Narezushi. For Narezushi, raw fish is stuffed full of rice and then the fermentation process begins. This process can take up to two months before it's done. Now you know more about your beloved sushi!

It’s an inside-out sushi roll where the nori seaweed features on the side, but the rice is on the outside coating the filings. It’s traditionally topped with bright orange tobiko or the less expensive alternative masago.

If the idea of raw fish has put you off trying sushi before, then you may be more inclined to try a Boston sushi roll as it contains poached shrimp instead of raw fish.

Although sushi originates from Japan, the Boston sushi roll recipe is actually a U.S adaption from the East Coast which pays homage to the shrimp fishing in the Boston area.

This article will let you know how to make the most delicious Boston sushi roll in your own home - it’s surprisingly easier than you think! 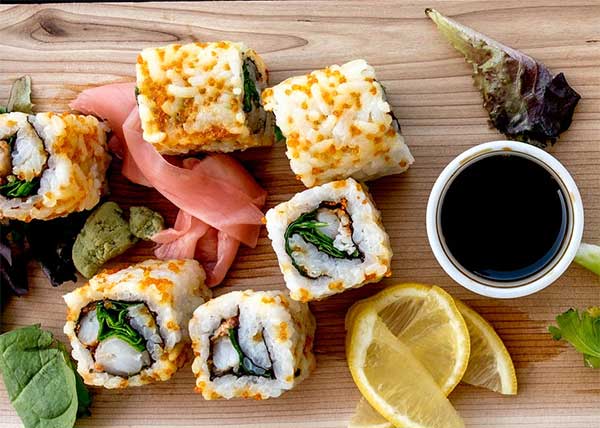 What is a Boston Sushi Roll made out of?

However, instead of the rice being tucked on the inside of the nori seaweed like in most common sushi rolls, it coats the outside and is then coated in tobiko which complements the soft rice with its smoky and salty flavor.

Some people substitute tempura shrimp if they’re willing to spend the extra time deep-frying the shrimp in batter, but we opt for the easier and healthier option of the poached shrimp - plus it’s just as delicious.

How to make Boston Roll Sushi

The way to make this recipe much simpler for yourself is to make sure your cucumber and avocado are sliced and prepared before you begin cooking.

You’ll want to cut them into matchstick pieces.

The key to a good sushi roll is getting the rice just right, that’s why you’ll need to know high-quality short-grain white rice with less water than you normally would for cooking regular rice.

You want the rice to stay nice and fluffy even when the sushi roll is rolled, so overcooking the rice will leave it turning to mush. The best ratio of water to rice to use is 1:1 (for this recipe it’ll be one cup rice and one cup water).

Once the rice is cooked (when it looks fluffy), take it off the heat and transfer it to a bowl where it can cool down slightly. When it’s warm, but not boiling hot, add sushi vinegar to the bowl and stir thoroughly until it's properly mixed in.

The next step and one of the easiest steps is poaching your shrimp. Place the shrimp in simmering salty water on the stove and then remove from the heat and let the shrimp cook for 3-5 minutes.

After that, immediately transfer the shrimp to a bowl of ice water to prevent the shrimps from cooking further.

Lay out your bamboo mat with plastic wrap or foil on top. Place half of the nori sheet on top of the bamboo mat and then evenly spread your cooked rice on top.

Then flip the nori sheet over and place your poached shrimp and veggies sparingly on top (don’t overfill).

Place your thumbs underneath the bamboo mat lifting the edge up and over the filling and then roll it away from you. Keep rolling and keep everything tight together until the ends meet.

Then add your tobiko onto the exterior of the rice and then tuck into your Boston sushi rolls.

Can I use something else to substitute tobiko?

Tobiko is a very distinct ingredient and there’s a reason why it’s so popularly used in the Boston Sushi Roll recipe. Its bright orangey color and strong smoky, salty taste is a welcomed addition to the roll.

People commonly substitute tobiko for masago as it is a lot cheaper, however, it doesn’t offer the same flavor or crunch as tobiko does.

If you’re going to spend the time making your Boston sushi rolls, then you may as well treat yourself to the tad more expensive ingredient of tobiko as it’ll bring your recipe altogether.

If you’re not a fan of fish eggs, then you can completely leave them out of the recipe. You could always use finely chopped black olives to cover your sushi rolls with

What nori sheets are best to use for this recipe?

The best kind of nori sheets to use for a Boston roll recipe, or indeed, any sushi roll recipe will be a very dark green, almost black color, and have the same thickness all over.

The best nori sheets have a naturally sweet flavor to them and are distinctively rich.

What kind of shrimp is best to use for Boston Roll Sushi?

You can use fresh or frozen shrimp for this recipe, we like to get ours fresh from the local fish market as they still have lots of flavor to them.

Before starting the recipe, you’ll want to peel the shell off and devein the shrimp. If you’ve never done this before then you can find some YouTube videos to show you what you should discard when using shrimp.

How do you know when an avocado is ripe enough for Boston Roll Sushi?

Picking an avocado that is ripe enough is key to achieving the right consistency for the Boston sushi roll. You’ll want to make sure that it’s right but still firm enough that it won’t turn into a mushy mess when you’re trying to cut and arrange it.

The best way to know if it’s ripe is to place the avocado in the palm of your hand and gently squeeze it, if it’s firm but still slightly squishy then it is perfect for this recipe.

However, if it doesn't have much give then it is not ripe enough. However, you can squish the avocado very easily then it’ll be too ripe for this recipe.

Ripe and ready avocados also have a slightly darker color. The easiest way to ripen your avocados is by leaving them at room temperature, keeping them in a cold environment will only slow down the ripening process.

How to prevent your sushi roll from falling apart 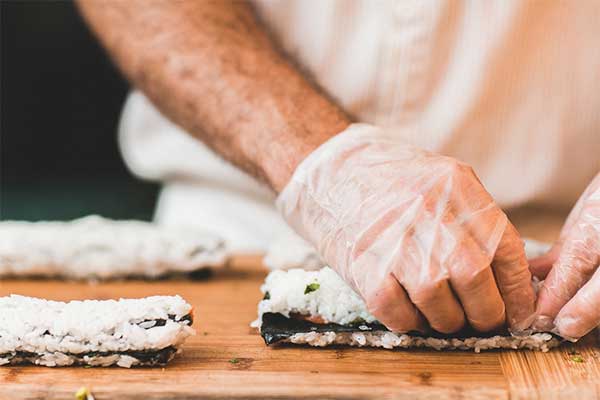 If your sushi roll won’t stay together, then you may have used the wrong type of rice. Sushi rolls will also fall apart if you have overstuffed them or if the nori sheets are too dry.

Make sure when you’re assembling your sushi rolls that you are squeezing the rolls tightly to keep them together.

What can I use instead of a bamboo mat?

If you don’t have a bamboo mat lying around your home, then you can always use a thick kitchen towel shape and roll the rice and filling of your sushi rolls.

Boston Sushi Rolls are a quick and simple way to integrate Japanese cuisine into your diet.

The recipe which is made up of tasty poached shrimp, creamy avocado, perfectly cooked rice, and cucumber will leave you feeling proud of your culinary ability.

If you’re not a fan of raw fish, then this recipe will be great for you. The recipe is also completely safe for pregnant women to enjoy.