When it comes to flavor, diversity, and tasteful adventure, nothing comes quite as close as sushi. Though sushi may make some people recoil, given that it is raw fish there is no grand surprise.

Contents show
Nigiri
Sashimi
Nigiri Vs. Sashimi
Frequently Asked Questions
Why is Sashimi more expensive than Nigiri?
Why is Nigiri so expensive?
How healthy is Nigiri?
Related Posts:

Many of the most adventurous foodies in the US may turn a cheek to sushi. Most people would associate the raw fish used in sushi with superstore fish counters or frozen fish.

Where the fish used in sushi is far from that. Sushi is made from the freshest, high-quality fish on the market, often salmon or tuna.

And it is totally safe to eat! 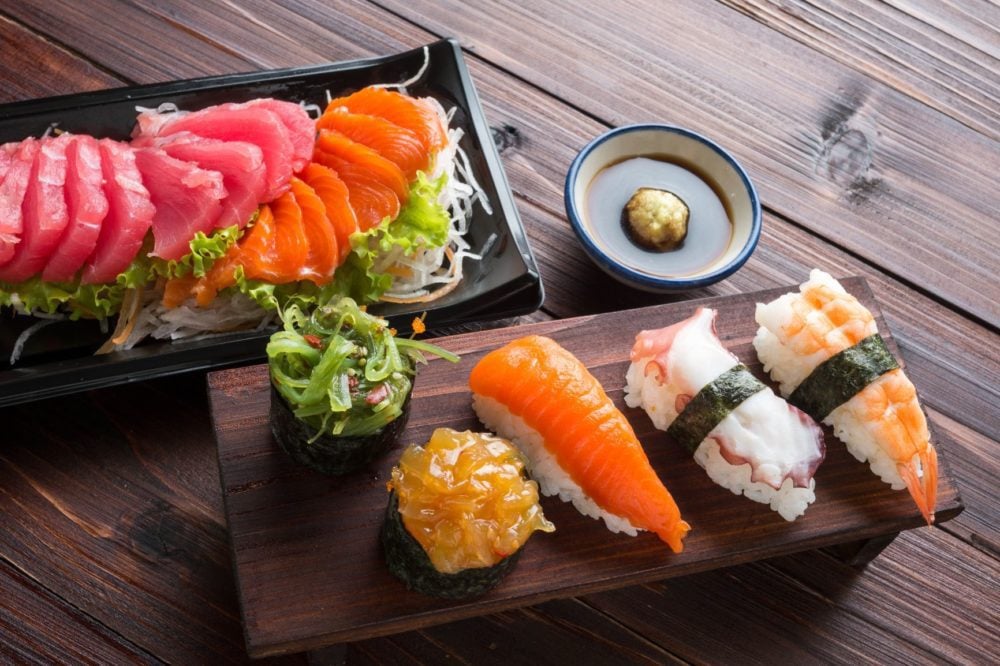 Some of the most taste-bud tingling dishes you can get on the market can be a nigiri or sashimi dish paired with a traditional Japanese sake.

Without delving fully into the menus at a sushi restaurant, you can be bewildered already as to what the actual difference is between Nigiri and Sashimi, which are indeed the most common of the sushi dishes. Not knowing the difference can put you off ordering it or even trying it out.

Sushi is seen as the dish that most proudly represents Japanese cuisine. It has gained so much popularity that it is recognized worldwide and enjoyed by millions. Sushi is often mistaken to be simply a fresh raw fish food.

However, to believe so would have you mistaken. Sushi is vinegared rice that is topped and paired with other ingredients, these can be vegetables, eggs, or seafood. You would come across many types of sushi if you were to visit a sushi restaurant, including nigiri and sashimi.

Nigiri is known to be a type of sushi, whereas sashimi is not, however you will usually find sashimi anywhere that serves sushi. These fishes are often paired with pickled ginger, soy sauce, and often wasabi as well.

Nigiri is a delicious treat that is made from thinly-sliced raw fish laid over a compacted sweet and salty vinegared rice. The roll is chilled and the taste of the fish combines with the tangy flavor of the rice.

It, like many other traditional sushis, can be eaten either with your hands or chopsticks. You could even use a fork if you wanted. 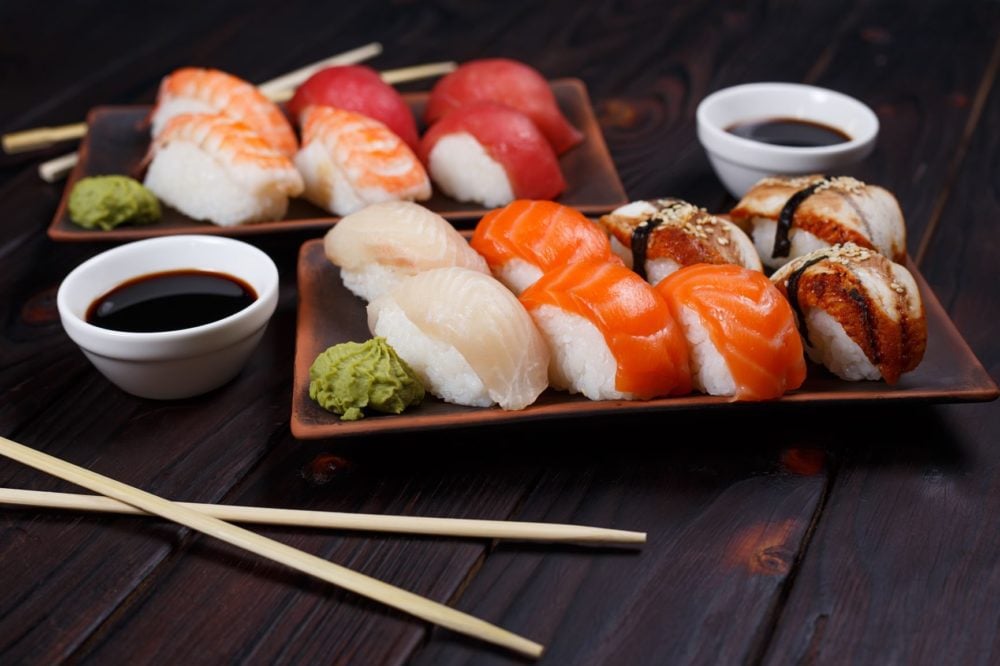 Unlike how you may traditionally picture Nigiri, it does not come in a tight sushi roll, often called Makizushi, but it is still sushi.

Neither of these sushis comes in a roll, though they are still sushi. Makizushi is the most popular type of sushi in the States but it is also the least traditional.

Nigiri is often made with bluefin tuna, salmon, and sometimes halibut. These fish are very firm and have a high-fat content that makes them melt in your mouth, a perfect contrast to the flavor of the rice and requires no endless chewing. It goes down easy.

Nigiri is made with sushi rice that is treated with vinegar. This rice is then balled and pressed with two fingers which forms the base of the nigiri, the fish is then placed on top of this rice base.

Nigiri literally means “two-fingers”. This comes from how the rice is specifically portioned and fits onto the chef’s “two-fingers” when pressing.

What makes Sashimi so different from Nigiri? Well, Sashimi is technically not a form of sushi at all. It is made from raw fish but does not include any rice, and rice is a key component in sushi.

Whereas Nigiri translates to “two-fingers”, Sashimi translates to “Pierced meat”. True to its name this dish is composed of only very thin, expertly sliced strips of raw meat. 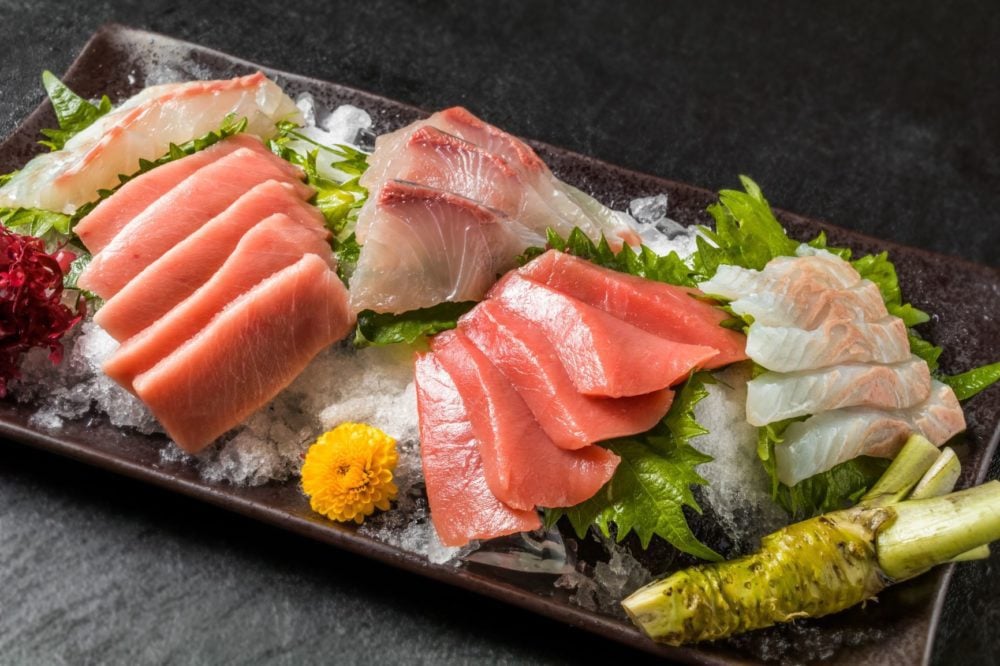 There is no rice to contrast its flavor and it stands alone on the plate. It is often paired with a small dish of soy sauce, this can be exquisite and a flavor you never knew existed.

Sashimi is most common in fish but it can also be made from other meats as well, unlike nigiri.

Sashimi can be made from; salmon, tuna, shrimp, squid, chicken, or even horse. Though chicken and meat options are harder to find in American restaurants.

Sashimi is fresh raw fish, or sometimes meat that is presented with several types of garnishes. The quality of this fish lies in the freshness of the fish, how it is sliced, presented, and garnished.

This dish is seen as an art form. Garnishes you may get with this dish are daikon radish, shiso leaves, or toasted seaweed.

The term sashimi may have originated from the culinary practice of sticking the fish’s head, tail, and fins to the slices of fish to identify the fish being eaten.

It could also have come from the method of harvesting, which is called “Sashimi-grade” fish, caught via an individual hand line. Once the fish has landed, it gets pierced with a spike and put into ice.

Sashimi chefs take a lot of pride in presenting their sashimi the right way. Although it may seem like a simplistic sort of food it can be appreciated at many levels with all senses.

Sashimi chefs consider it their virtue and signature in how they create their unique sashimi dishes, through cuts, presentation, sauce, garnish, and slice. For more great sushi ideas and fish recipes visit how long is sushi good for, Boston Roll sushi, differences between sashimi and sushi, dragon roll ingredients, and Nigiri vs Sashimi.

Let’s have a look at how the subtle differences weigh up in creating these vast differences that make these foods so different, unique, and loved by connoisseurs of the infamous Japanese cuisine.

N- Nigiri is mostly raw, but can sometimes be made with cooked or seared fish. Depending on the chef and the dish.

N- No, Nigiri is always fish or other kinds of seafood, such as shrimp, octopus, squid, tuna, salmon. But it is never meat.

S- Yes, Sashimi can be thin slices of meat, it can be beef, chicken, horse, sometimes frog, as well as fish and other kinds of seafood.

N- Nigiri can be eaten however you like, most people will use hands or chopsticks, but you won’t get scorned for using a fork either.

S- Sashimi is traditionally eaten with chopsticks and should only be eaten this way.

S- Sashimi often comes with a garnish, daikon radish, shiso leaves, seaweed, and often soy sauce and other options. The variety depends on the chef and how they want to present their dish.

I asked a sushi chef who obviously deals in fresh fish everyday at his Japanese restaurant. He prefers nigiri sushi as its the most authentic. No reason you can't pick your favorite. Enjoy!

Why is Sashimi more expensive than Nigiri?

The obvious answer to the expense of Sashimi is in the fish. While Nigiri has the filling rice content, Sashimi does not. You will need more Sashimi to feel full than Nigiri, however, Nigiri does not have as much fresh, high-quality fish content.

The fish used in Sashimi has to be high-quality fish as it is not only raw, but it is often served on its own with only a garnish to accompany it.

The fish served in sushi rolls, and Nigiri is generally smaller and thinner than you will get with Sashimi, this is because it needs to fit comfortably with a small, bite-size rice accompaniment.

On the other hand Sashimi is just fish, so it is often thicker and much larger, so you get much more fish. Basically with Sashimi you are paying for the amount and the quality of the fish you are getting.

Why is Nigiri so expensive?

Unlike many other forms of sushi, Nigiri shows the fish. When you look at sushi rolls, the fish is hidden on the inside, you are not looking at it, this is not to say that the fish is of a bad quality, but it does not need to look as aesthetically pleasing as the fish that is put on top of Nigiri.

Nigiri fish is on display and must look appetizing and flavorful, whereas the sushi inside rolls does not need to look as pretty. The fish often put on top of Nigiri tends to be prepared similarly to Sashimi, in the requirements of quality and care, although it is more often cooked for Nigiri.

You are also more likely to get more fish with Nigiri than other rolls, as the fish is on top of the rice rather than compactly packed into a rice roll.

How healthy is Nigiri?

Nigiri is no salad, that is obvious. However, it is a good source of the sought-after heart healthy omega-3 fatty acids thanks to the fish that it is made with. Sushi is also generally well known for being low in calories, as there is no added fat in a sushi dish.

The most common type of healthy sushi is actually Nigiri. Nigiri is actually very good for your health and just one piece of Nigiri sushi is only about 70 calories.

This means that it would take quite a few plates of Nigiri to even come equal to McDonald's fries, and by the time you reached that amount of calories, you would likely be full already.

Nigiri is generally considered to be a weight-loss friendly food option. Eating sushi every day may not necessarily be healthy but getting some sushi instead of eating fast food will certainly help in a weight-loss journey.