Fresh ginger, also known as root ginger, is the underground section of the Zingiber officinale.

Turmeric, galangal, and cardamom are also part of the same family, Zingiberaceae. Ginger originated in China but has now spread its roots across the globe thanks to the spice routes.

Ginger is a very commonly used spice, found in everything from ginger beer to gingerbread. It is also commonly used in savory dishes in Asian, Caribbean, African, and even European cuisines!

It is so versatile, it never hurts to keep some kind of ginger on hand. 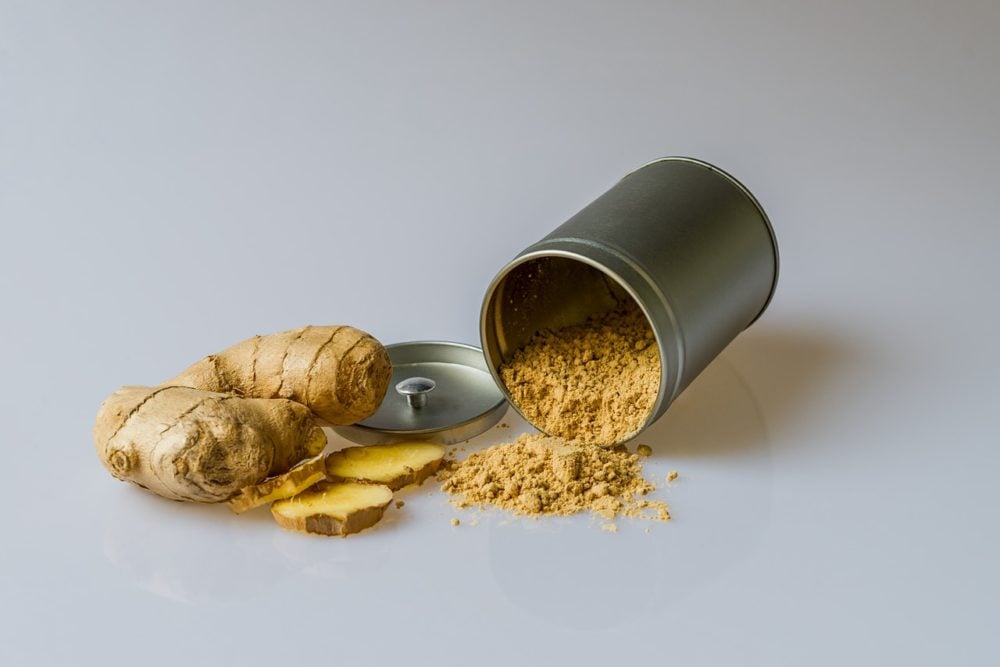 Ginger has antibacterial and anti-inflammatory properties that are revered the world over. It is commonly used as a holistic medicine across the globe.

There are oils known as gingerols contained within ginger root. This is the main bioactive component of ginger and is what gives it these properties.

It is also shown to reduce oxidative stress in the body by reducing the number of free radicals.

This compound has also been shown to help prevent cancer. There is preliminary evidence to suggest that ginger has protective effects on the body. This is very early days in terms of research, and there is no real guarantee that it works.

It has long been hailed as a natural way to alleviate nausea and related symptoms, such as motion sickness. It has been proven that just 1 to 1.5 grams of ginger a day can reduce the symptoms of nausea.

There have also been studies done into the impact of ginger on osteoarthritis. It was proven to reduce the pain levels and incapacitation experienced by trial participants. This works both as a topical application and when ingested.

A new area of research is into the anti-diabetic properties of ginger. It has been shown to reduce hemoglobin A1c markers (indicators of long-term blood sugar levels).

It was also shown to reduce ApoB/ApoA-I (Apolipoprotein B/ApolipoproteinA-I) ratios and MDA (malondialdehyde) levels. High levels of these are commonly seen as indicators of susceptibility to heart disease.

Ginger is also believed to help with treating chronic indigestion as ginger helps speed up the emptying of the stomach.

It can also help to reduce menstrual cramps and the associated pain (dysmenorrhea). A 2009 study of 150 women found that ginger powder had the same impact on pain as NSAIDs. NSAIDs are nonsteroidal anti-inflammatory drugs, such as ibuprofen and mefenamic acid.

There are suggestions that including ginger in your diet can help to protect against developing Alzheimer’s disease. This is due to the anti-inflammatory impacts that ginger has on the body.

It is believed to enhance brain function at all ages and can even help to prevent a decline in brain functionality as you age. This presents as an improvement in working memory and reaction time among test participants.

Ginger has also been shown to reduce the risk of infection, particularly gingivitis and periodontitis (diseases causing inflamed gums).

This is a dried version of the ginger root and is much less spicy and nuanced in flavor. The essential oils give fresh ginger its kick, and the removal of these is what causes ground ginger to have a milder flavor.

It has a much more concentrated flavor than fresh ginger, and so you will need to use less of it. Ground ginger is commonly used for baking purposes, such as gingerbread.

For every tablespoon of fresh ginger, you will need to substitute ¼ teaspoon of ground ginger.

We have detailed instructions on how to freeze ginger below. It is easy to peel and grate straight from the freezer.

As it is basically fresh ginger, it can be used in equal quantities as a substitute.

This is pureed ginger, usually blended to a smooth consistency with some added oil. It must be stored in the refrigerator once it has been opened. It can be kept for up to 5 days in an airtight container.

If you store it in the freezer, the ginger paste will keep for up to 5 months.

If your recipe calls for 1 inch of ginger, you should use 1 teaspoon of ginger paste. It can be used anywhere you would use fresh ginger.

This is ginger that has been finely chopped and will often have additions such as oil, sugar, and salt. It is often a more diluted version of fresh ginger and you are likely to need a little more for the same impact.

It is great for use in marinades or stir-fries. Like ginger paste, minced ginger can be substituted in a 1:1 ratio for fresh ginger, although you could add a little more if you want a bigger kick.

This is the juice extracted from the ginger root, like apple juice. It is not commonly used as a substitute for fresh ginger but could work in a pinch.

If you are baking or making something like a soup, ginger juice could work as a substitute for fresh ginger.

It is also commonly used in meat marinades and sauces. This is because the ginger contains enzymes that break down the protein structure and tenderizes the meat.

This is not an effective substitute for ginger root but could be used in a pinch.

Traditionally this is only served with sushi.

This is root ginger that has been cooked in a sugar syrup and then rolled in granulated sugar crystals.

This makes it much sweeter than regular ginger root, but in a pinch, it can be used as a substitute.

For every tablespoon of fresh ginger, you will need to substitute 3 tablespoons of minced crystallized ginger. 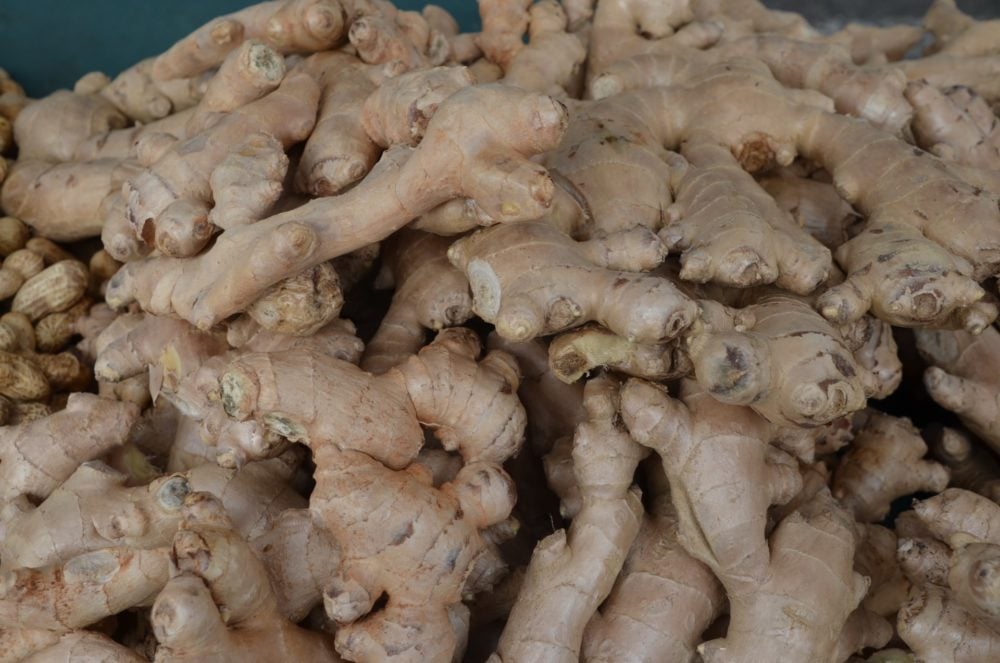 This is commonly used in Jamaican cuisine, so much so that it is actually referred to as Jamaica pepper.

It has a sweet and semi-spicy flavor evocative of ginger. It will not give your dish the same taste but will impart a similar flavor profile.

It is perfect for use in dishes containing meats such as beef and lamb such as stews. You do not tend to require more than ½ to 1 teaspoon of allspice per recipe.

In the United States, allspice is more commonly found in seasonal baked goods.

For every tablespoon of fresh ginger your recipe calls for substitute ¼ teaspoon of allspice.

Nutmeg has a sweet yet spicy flavor. It is found in the seeds of the Myristica fragrans, the nutmeg tree.

These seeds are either kept whole and freshly grated into dishes as you need them or ground to form a fine powder.

It is used similarly to allspice and cinnamon in both savory and sweet dishes. It works well with vegetables such as cabbage and broccoli; as well as sausages, pasta, and rice.

For every teaspoon of fresh ginger your recipe calls for, substitute 1 teaspoon of nutmeg.

The flavor of cinnamon is usually described as warming, similar to ginger. Cinnamon comes from the interior bark of a tree which is then dried and occasionally ground into a powder, or left as cinnamon sticks.

This is commonly found in savory dishes such as tagines, working well with chicken, lamb, and rice. It is also used in a lot of Asian curries to add to the flavor profile.

It is another seasonal spice across the Western world, commonly used at Christmas time.

It is loved in a multitude of desserts and sweet baked goods, such as cinnamon rolls. For every tablespoon of fresh ginger your recipe calls for, substitute ¼ teaspoon of cinnamon.

Mace has a warm and sweet, aromatic flavor. It comes from the same family as nutmeg - it is the red exterior coating of nutmeg seeds.

It is commonly used in baked goods like cakes and cookies. It can also be paired with savory foods like eggs, cheese, and sausage - making it a good breakfast spice.

For every tablespoon of fresh ginger your recipe calls for, substitute ¼ teaspoon of mace.

This tends to be made from a blend of nutmeg, ginger, cinnamon, and allspice. This means that it can easily be substituted for fresh ginger.

For every teaspoon of fresh ginger your recipe calls for, substitute 1 teaspoon of pumpkin pie spice blend.

These ingredients are closely linked to the ginger family. Turmeric is more bitter and earthy than ginger, whereas cardamom is more nutty with notes of citrus.

They will not give your dish the same flavor profile as ginger but will add a different flavor element to make your dish more interesting.

You should substitute ¼ teaspoon of each spice per tablespoon of fresh ginger your recipe calls for.

This is another root, commonly found in Southeast Asia. It is described as a combination of turmeric and ginger in terms of the flavor profile.

You are unlikely to find it in standard stores, and instead, you should look online or in specialist Asian food stores.

This can be used as a 1:1 substitute for fresh ginger, but you can use up to a 1:1.25 ratio as galangal is slightly less strong than ginger root.

If you're looking for a substitute for ginger, you can't beat this list.  A ginger substitute may be just the thing for that ginger ale recipe.  I love candied ginger. 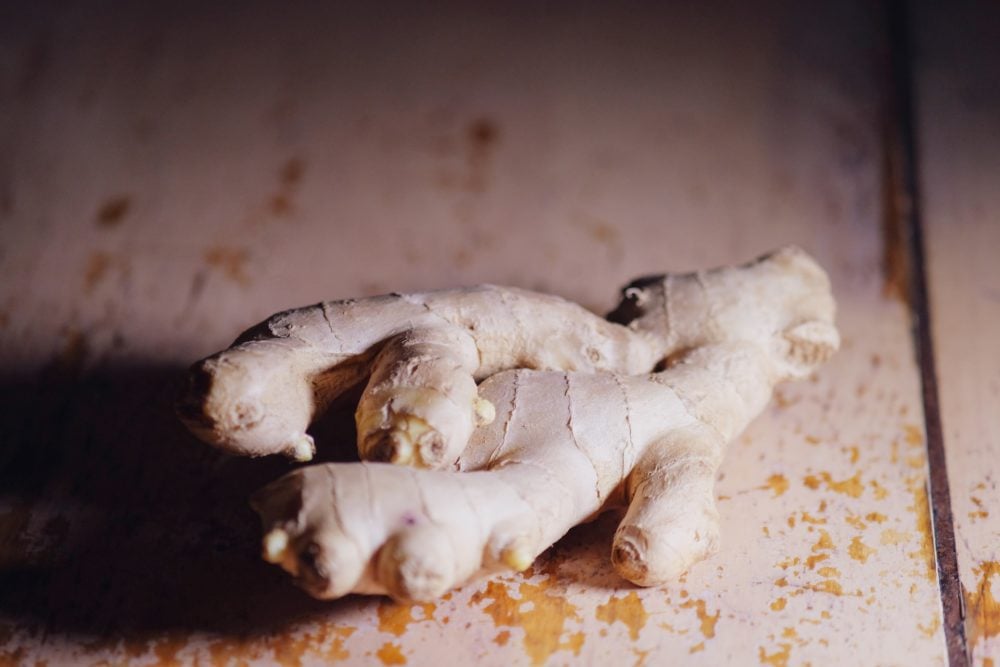 How to Choose Good Root Ginger

You should look for a ginger root with not too many knots and branches. The ginger should not be wrinkly or moldy. Instead, the skin should be taught and firm. It should feel heavy for its size.

The freshest and highest quality ginger is usually found in specialist Asian food stores rather than in a supermarket.

How to Refrigerate Ginger

We recommend keeping the ginger root in the vegetable crisper drawer of your fridge. Do not peel.

Seal it inside a plastic bag and press out as much air as possible. If you do not have a plastic bag, using a brown paper bag will do a similar job.

If you have cut the ginger, you will need to pat it dry with a piece of kitchen paper before storing it. This will not keep as long as an intact root, so try not to cut it up until you want to use it.

How to Freeze Ginger

The simplest way to do this is to pop the ginger root inside a ziplock freezer-safe bag. Press out the air and seal.

This will keep indefinitely in the freezer.

How to Preserve Ginger in Spirit

This works best for peeled ginger. Place it in a small glass jar and cover with a spirit. The best options are sherry and vodka.

This will keep for a few weeks. If the spirit begins to appear cloudy, this is an indication that bacteria and mold are growing.

How to Grow Ginger

In order to always have fresh ginger on hand, plant a small amount of the root inside a plant pot on your kitchen windowsill.

When you need a little ginger for cooking, lift the plant up and cut off a little of the root to use. Repot and continue to water - the plant will continue to grow.