What is Arborio rice? Arborio rice is a type of short grain rice that is named after the town of Arborio, in the Po Valley, which is situated in the main region of Piedmont in Italy. It’s also grown in Arkansas, California, and Missouri in the US.

This Italian short-grain rice is frequently used to make risotto - a northern Italian rice dish cooked with broth and slow-cooked to a creamy consistency.

Arborio rice is characterized by its rounded grains which have a firm, creamy, and slightly chewy texture compared to other varieties of rice.

This unique texture is due to Arborio rice’s higher amylopectin starch content. Due to this it has a starchy taste and blends well with other flavors, making it the rice of choice for rice pudding as well as creamy risotto. 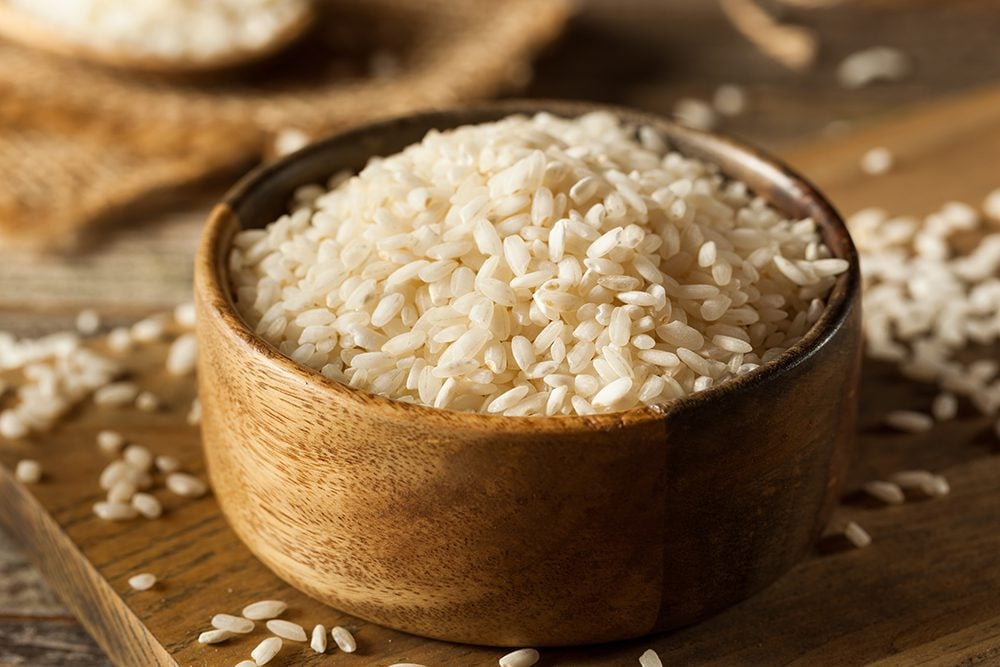 However, Arborio rice is not always readily available at your local store or supermarket.

It’s also pretty expensive compared to other rice varieties. In this case, it doesn’t mean you should miss out on that delicious recipe altogether.

There are various alternatives to Arborio rice, and, while these won’t be quite as starchy or creamy as the Italian rice, they’ll still do a pretty good job.

Pearl barley is a type of whole grain barley and makes the best Arborio rice substitute due to its high starch content.

The process pearl barley goes through removes its fibrous outer hull before polishing which removes some or all of the bran layer, meaning it cooks faster and doesn’t require soaking before cooking.

Pearl Barley is known for its high caloric, protein, vitamin, and mineral content, though some varieties are higher in lysine.

It is mainly used in soups, stews, and potages and is also the primary ingredient of the Italian dish orzotto.

Like Arborio rice, Carnaroli rice is cultivated in the Piedmont and Lombardy regions of northwest Italy.

This short-grain rice has a high amylopectin content and cooks to a creamy texture with a firm body that absorbs flavors well.

It’s used in risotto but differs from Arborio rice as it has a higher starch content and firmer texture, as well as a longer grain.

It is the most widely-used type of rice in Italian cuisine and is highly prized, often referred to as the “the caviar of rice”.

Brown rice is whole grain rice with the inedible outer hull removed during the milling process. White rice is the same grain but is eaten without the hull, the bran layer, and the cereal germ.

The bran layer in brown rice is what gives it its high fiber and rich nutritional content, which makes it nutritionally superior to white rice.

Therefore, it is the best choice for people who wish to stay away from simple carbohydrates, and it also has a thicker, grainier texture than white rice which makes it ideal for risotto.

However, it also takes longer to cook than white rice, but this shouldn’t matter much if you’re using it in Risotto, as the dish is slow-cooked anyway.

Basmati is a type of long-grain rice grown in India and Pakistan.

It’s known for its slender grains and aromatic flavor, and according to the Indian Government agency APEDA, a rice variety can be called 'Basmati' if it has a minimum average precooked milled rice length of 6.61 mm and breadth of up to 2 mm.

Basmati rice is naturally gluten-free, meaning it’s not the perfect choice for risotto. However, it has a low glycemic index which makes it a great healthy alternative to Arborio rice.

You can try adding pumpkin broth to your risotto to make basmati rice stickier and more suitable for the dish.

Farro is an ethnobotanical term for three species of hulled wheat: spelt, emmer, and einkorn. In Italian cuisine, the three species of wheat are sometimes referred to as farro grande, farro medio, and farro piccolo.

The ’emmer’ variety is commonly available in the US and can be conveniently cooked in about 25 minutes without soaking.

In Italy, Emmer is by far the most common variety of farro and is specifically grown in the mountainous regions of Tuscany and Abruzzo. Emmer is sometimes referred to as “true” farro as it is considered a higher quality of grain for cooking.

Sushi Rice is a short-grain rice from Japan. It is favored for making sushi as it acquires a slightly sticky texture when cooked.

Sushi rice is a great alternative to Arborio rice as it has a similar creaminess that suits risotto well. This means you won’t need to add cornstarch or cream to it.

Before cooking, sushi rice is usually soaked in water for around half an hour in summer, and two hours in winter. The soaking times also depend on the quality and freshness of the rice.

When it comes to cooking, the rice is then boiled using a ratio of about five parts of water to four parts of rice.

The ratio can go down 1-to-1 depending on how fresh the rice is. It is then steamed until the center of the rice becomes soft.

Israeli couscous is sometimes called 'pearl couscous.' It is made up of round granules that are made from semolina and wheat flour.

It’s not gluten-free, but it does have a slightly nutty flavor and chewy texture that absorbs flavor well.

When cooked in boiling water it takes about 10 minutes to cook, which makes it an easier alternative to Arborio rice for speedy Italian rice dishes.

It can be eaten hot or cold and works well in numerous dishes thanks to its flavor-absorbing properties.

Quinoa has become popular among health-conscious consumers in recent years as it contains more protein than any other grain, as well as all 8 essential amino acids.

Quinoa is cultivated by Incan tribes in the Andes Mountains of South America. It lacks the creaminess and starchiness of Arborio rice, however, it can still be used as a substitute as it is comparable in its high nutritional value.

For added creaminess, you can add cream or milk to your risotto recipe or put some hot broth in a cup and add it to the liquid. A pressure cooker or instant pot works great too.

Bulgur wheat is formed by par-boiling, drying, and then coarsely grinding wheat berries, and it’s commonly known as 'cracked wheat' in the United States.

Due to the process it goes through, it cooks in a short period of time when steamed or boiled.

Bulgur wheat, which is sometimes known as 'burghul wheat', has a high percentage of protein and minerals, and has a distinctive, slightly nutty taste.

It’s also high in fiber, low in fat, and has zero cholesterol, making this nutritious grain a healthy alternative to Arborio rice.

Arborio rice is pretty unique and is usually the choice of rice for risotto dishes, however, it also tends to be expensive and may be harder to find in certain locations in the US.

However, just because you don’t have Arborio rice to hand doesn’t mean you should miss out on that risotto or rice pudding recipe.

There are a whole host of rice alternatives out there, and we’ve included just 9 of these in this article, though there are probably countless more out there to discover.

While pearl barley or Carnaroli rice provide the closest texture and creaminess to Arborio rice, you can up your nutritional value by opting for brown rice instead, or better still, quinoa or bulgur wheat, which are lacking in starchiness but are high in nutritional value.

Don't forget, you can also add cream, milk, parmesan cheese and chicken broth to your risotto dish if you're using a type of rice or grain that is lacking in starch. This will allow you to achieve that creamy, indulgent texture that is associated with Arborio rice and risotto. 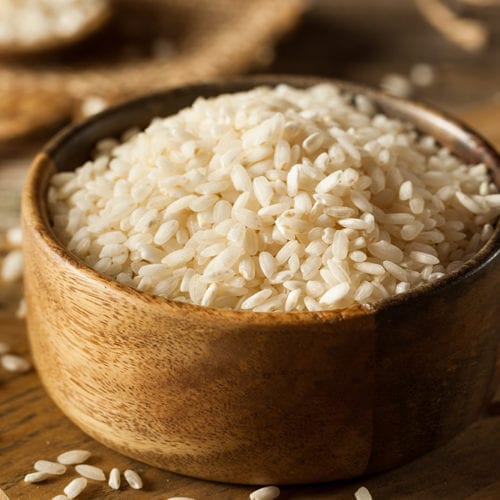 These options are sure to be a hit. So, gather your family and friends and enjoy. Let us know your thoughts!
5 from 6 votes
Print Recipe Pin Recipe
Total Time 14 mins
Course Substitute
Cuisine American
Servings 3
Calories 220 kcal

Calories: 220kcal
Keyword arborio rice substitute
Tried this recipe?Let us know how it was!