Russian desserts are some of the most unique and varied in the culinary world, with a range of pastries, confectionaries, and cakes all of which have a long tradition in Russian culture.

These dishes are incredibly diverse, some being incredibly sweet cakes while others being more savory and they hail from all over Russia and the former Soviet Union.

If you feel like tasting something a little different or surprising your guests at your next dinner party, preparing one of these delicious Russian desserts would be a great way to shake things up and test your skills as a baker and cook. 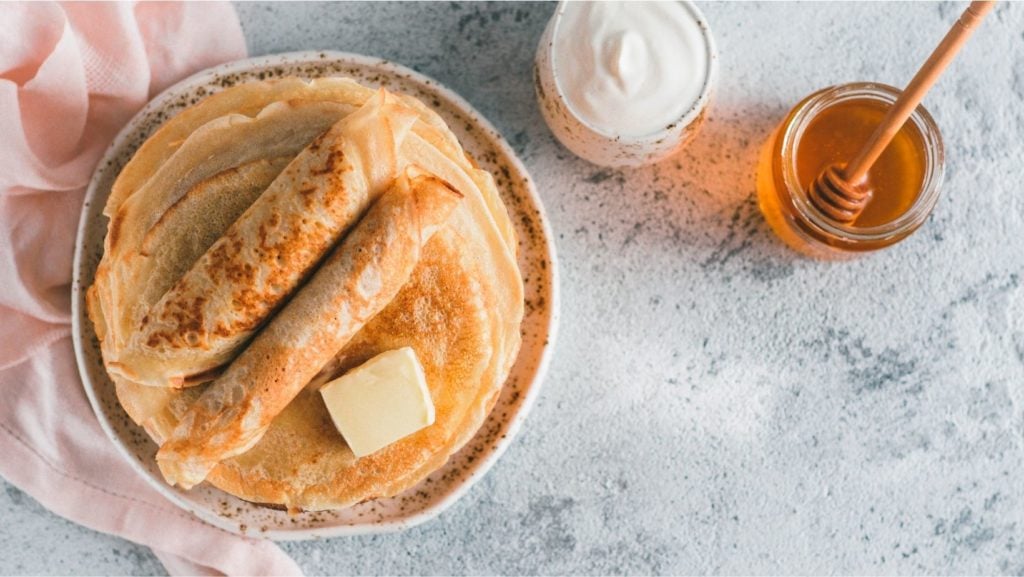 Russian Blini, sometimes known as blin or bliny is a traditional dessert consisting of a pancake made from wheat flour and served with traditional garnishes such as smetana, butter, caviar, or tvorog. This dessert is one of the most popular dishes in Russia and is a must-try for dessert lovers or pancake lovers who enjoy thin pancakes.

The batter for traditional blini is made with yeast, which is allowed to rise and then diluted with boiling water or milk. Unyeasted versions of this pancake are also popular in Russia and are often much thinner and lighter than standard yeasted blini.

They can be presented in various ways and work well with a range of garnishes making them versatile, great for breakfast, a lunchtime snack, or a dessert depending on what you decide to serve along with them.

Although this dish originated from the Jewish communities of Poland and remains popular among the Jewish diaspora and in Israel, this is also a popular dessert in Russia as it spread there from nearby Poland.

Traditional Rugelach is made by rolling a triangle of delicious dough around a particular filling, creating a crescent of interlinked dough and filling.

It looks very similar to a French Croissant but is somewhat darker and it is made from sour cream or cream cheese to make the dough. The types of fillings vary from raisins to walnuts, chocolate, marzipan, cinnamon, and fruit preserves or jams.

There are also savory versions that can be filled with other ingredients such as cheese. 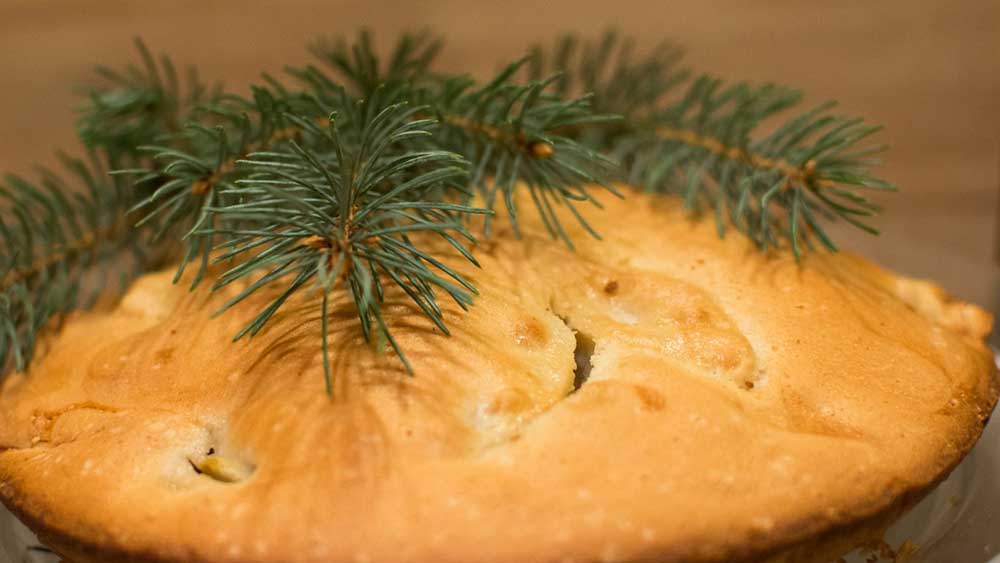 Charlotte cake is one of the most decadent and popular pastries and is sometimes known as an icebox cake in other parts of the world.

These cakes are made by using bread, sponge, or biscuits to line a cake mold which is then filled with custard or fruit puree.

The origin of this cake is unknown but is believed to have been in England or France during the 19th century and became popular in Russia where brown bread and applesauce were baked to create a delicious pudding.

Modern versions differ slightly from this however and tend to resemble chopped apples baked in a sweet batter.

This is an egg-based dessert that is sometimes found in eastern Europe as well as the Caucasus region, and it is made with egg yolks, sugar, and various flavorings from honey to cocoa, rum, or vanilla. In many ways, it is quite similar to eggnog however it is usually served chilled or at room temperature, but can be served warm as a home remedy for illnesses.

The name of the desert comes from the 17th Century Jews of Europe, but the dessert became most popular during a time of strife and struggle during the Communist era of the Soviet Union, where food shortages, particularly of sugar, meant that desserts needed to be improvised out of whatever was available.

To prepare this dish, egg yolks are beaten with sugar to form a creamy texture. Usually, a single portion uses two egg yolks and three teaspoons of sugar.

You can then add various flavorings such as honey, vanilla, vodka, rum, raisins, whipped cream, or chocolate depending on your preference, making this a great base for a simple and versatile desert with a very interesting history. 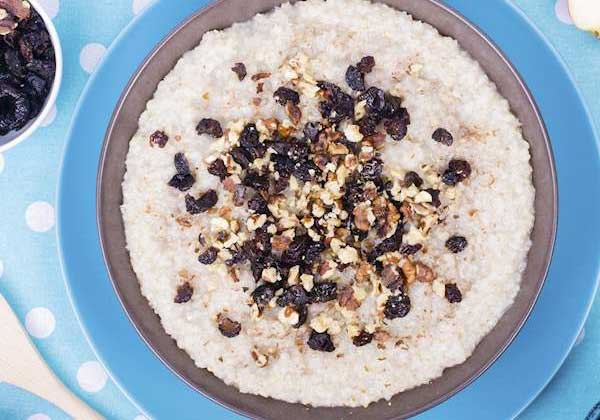 This sweet porridge is a favorite in Russia and is prepared using milk and semolina with candied nuts, honey, and dried fruits. Various nuts are used from walnuts to almonds and hazelnuts, but the key to making this dessert is in the baking of the milk or cream until a golden skin begins to form on the top.

This skin is used to separate the different layers of ingredients and the dish is finished with brown sugar which is typically browned before serving.

The name of the dish is believed to come from Dmitry Alexadrovich Guriev who was the minister of Finance of the Russian Empire at one point in time.

It is believed that the chef who invented this dish, Zakhar Kuzmin, was patronized by Guriev and was made the regular chef of his court and home.

Kulich is what Russian’s call Easter bread, which is a festive dessert that is tall and round with decorations and icing on its top.

The bread is very popular among Slavic peoples and is tied to the spread of Orthodox Christianity, which is believed to be the origin of the cylindrical shape of the cake.

After the Easter service, the Kulich will be blessed by the priest, and it is commonly delivered in a basket decorated elaborately with flowers.

The bread is baked in tall, round tins, and once it has finished baking and has cooled it is topped with white icing and decorative sprinkles.

It is a very similar bake to Italian Panettone but is a much heavier and dense pastry than its Italian counterpart. 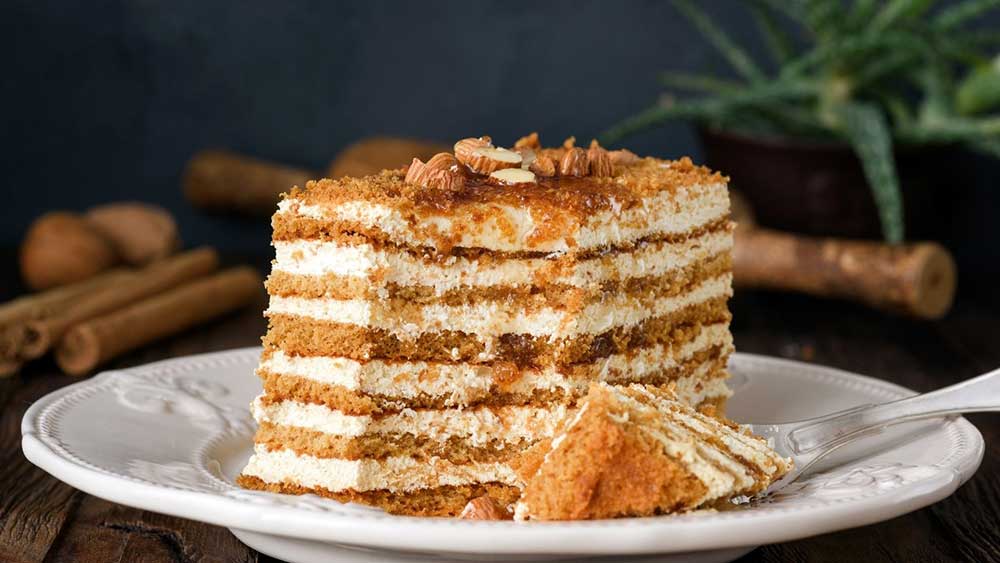 This cake is a sort of layer cake which was popular in various countries of the former soviet union. The main ingredients are smetana (sour cream), condensed milk, and honey. these are also known as Russian honey cake or Russian tea cakes.

The prep time for this cake is known to be substantial and consists of laying down sponge cake with cream fillings and covering it with nuts or crumbs from leftover cake. The thinner layers harden as they come out of the oven, but the central filling remains moist and soft, and this eventually spreads out to soften the hard-baked exterior.

The cake has many variants but the core ingredient is honey which is what gives this cake its enduring flavor and texture.

It is believed this cake was created during the 19th Century in the Russian Empire by a chef who was young and wished to distinguish himself before the Empress, Elizabeth Alexeievna, the wife of Alexander the first. Unfortunately for him, the Empress hated honey, and dishes which used it disgusted her.

It is said that the young new confectioner was unaware of the Empress’ distaste for honey, and baked this new cake with thick sour cream and honey.The Empress fell in love with the cake, initially being unaware it contained any honey. It remains a popular choice today and is alternatively served with buttercream, custard, or condensed milk.

A traditional Russian candy, Pastila is very similar to fruit pastilles, or small individual pieces of pressed fruit paste or juice with a lighter, more airy texture and delicate fruit flavors.During the Russian Empire, these were known as jellied sweetmeats, and were often served with tea and treated similarly to modern marshmallows.

The original versions of this candy were made with sour Russian apples and northern berries such as rowan or lingonberry, and sweetened with sugar, honey, and egg whites. This paste would be baked for a long time in a Russian oven and then placed in several layers to dry in the oven as it cooled.

Eventually, the popularity of this candy saw it become produced industrially, however, these versions are very much inferior to homemade Pastila made in traditional Russian ovens. Today it can be hard to find as it has been mostly replaced with Zefir, a similar more modern creation. 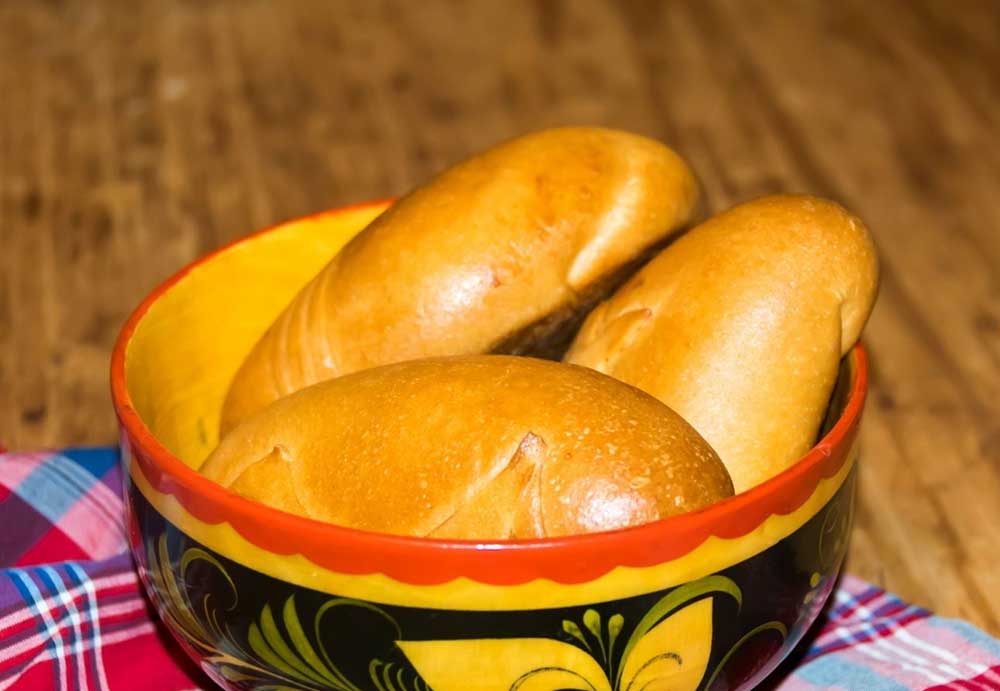 Pirog is a baked dough that can contain both sweet and savory fillings and is believed to be one of the most popular Russian and Eastern European dishes.

Its name is derived from the old Slavic word for banquet.

The pastry itself is usually made from yeasted dough and wheat flour, although it may have originally been made from rye flour.

The fillings vary and can include cottage cheese, various fruits, and berries, nuts, poppy seeds or honey. Savory versions may include meats, mushrooms, potatoes, or cabbage.

Pirozhki are actually very similar to pirog and essentially a smaller, handheld snack version of the larger traditional pastry.

Typically these smaller buns are crescent-shaped and come with various fillings which are totally enclosed within the pastry.

Again they can be sweet or savory and are often served with soups. 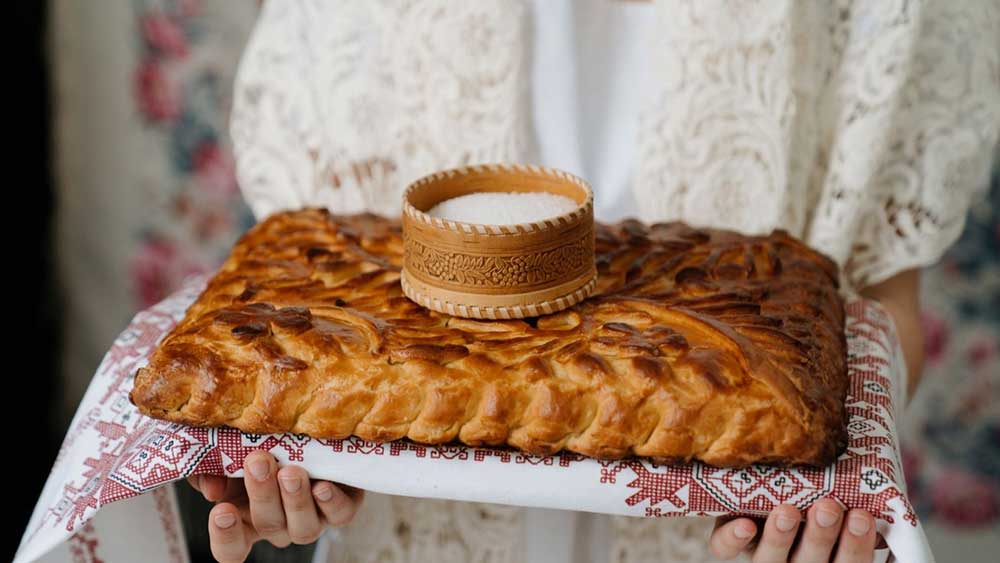 Traditionally Pryanik is made from flour and honey and is a common baked confectionary in Russia, Ukraine, and Belarus. In many ways, they are similar to gingerbread but don’t always contain ginger, instead of focusing on honey, a popular ingredient in Russian baking and confectionery.

Modern versions of this snack often substitute honey, however, particularly industrial production of this candy.

This popular chocolate-covered candy is also known as Ptasie Mleczko and Linnupiim, however, the various different names translate literally into ‘birds milk’ or crop milk.

It is one of the most popular candies in Eastern Europe and Russia and comes in various forms including bars and cakes.

The key feature is a light, fluffy soufflé topped or surrounded by chocolate, however, some cakes also use a sponge base.

The Russian version of this treat has one specific ingredient that sets it apart from various other versions, and this is the usage of agar-agar instead of gelatin to thicken the soufflé, as it can reach a higher temperature.

It’s a very tasty dessert with a wonderfully satisfying texture and a beautifully sweet flavor and is comparable to meringue or nougat. 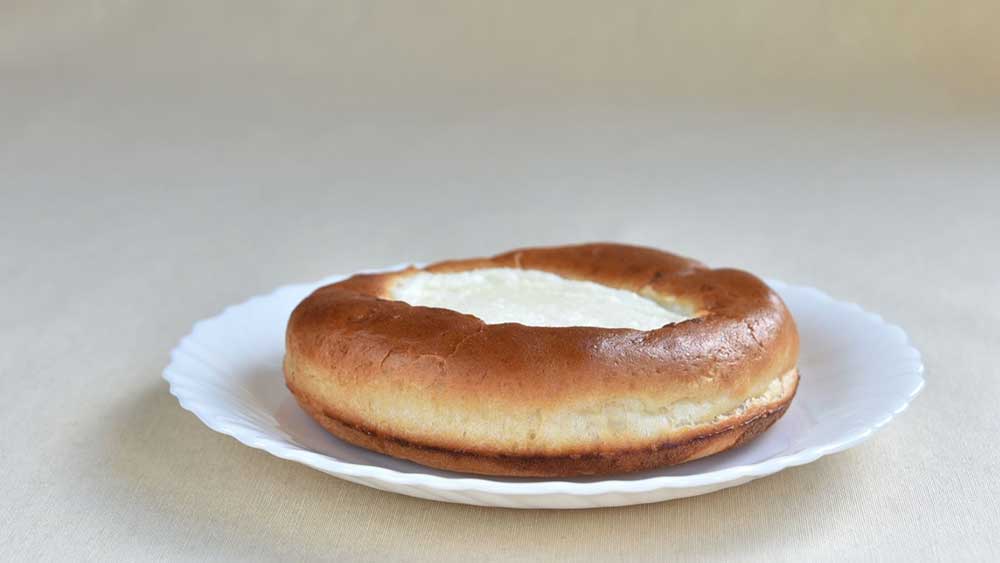 Vatrushka is a pastry with a ring-like shape that is filled with quark and often topped with fruit. They can be quite large, around the size of a doughnut or even bigger, and are baked with a dough of sweet yeast.

It’s popular in Eastern Europe and Russia and is very similar to Pirog.

Zefir is a confectionary that is very similar to traditional Pastila, however, it is made by whipping fruit puree, sugar, and egg white and thickened with modern gelling agents such as pectin, agar, or gelatin. It has an airy, light consistency and resembles meringue, but it is far softer and closer to nougat in consistency.

It comes in various flavors and is often white or pink. 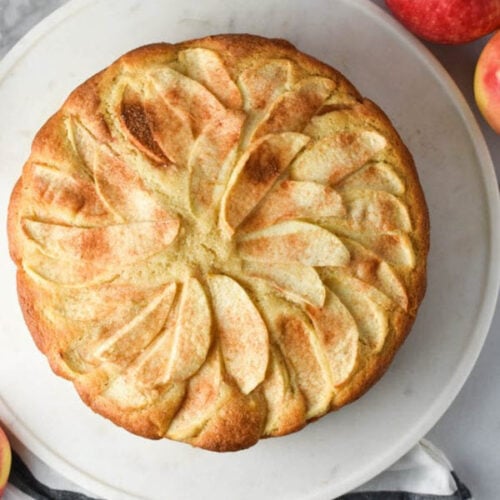 These recipes are sure to please. So, gather your family and friends and enjoy. Let us know your thoughts!
5 from 7 votes
Print Recipe Pin Recipe
Total Time 33 mins
Course Dessert
Cuisine Russian
Servings 3
Calories 274 kcal

Calories: 274kcal
Keyword guriyev porridge, russian desserts
Tried this recipe?Let us know how it was!