Whether you are vegan, curious at giving it a go or simply falling down a scrolling rabbit hole, one thing is clear: vegan is the buzzword of the year.

When transitioning to a vegan diet, we find ourselves often wondering, what can we eat?

As a vegan for over a year now, I remember panic searching for everything to see what I could eat when Veganuary began! 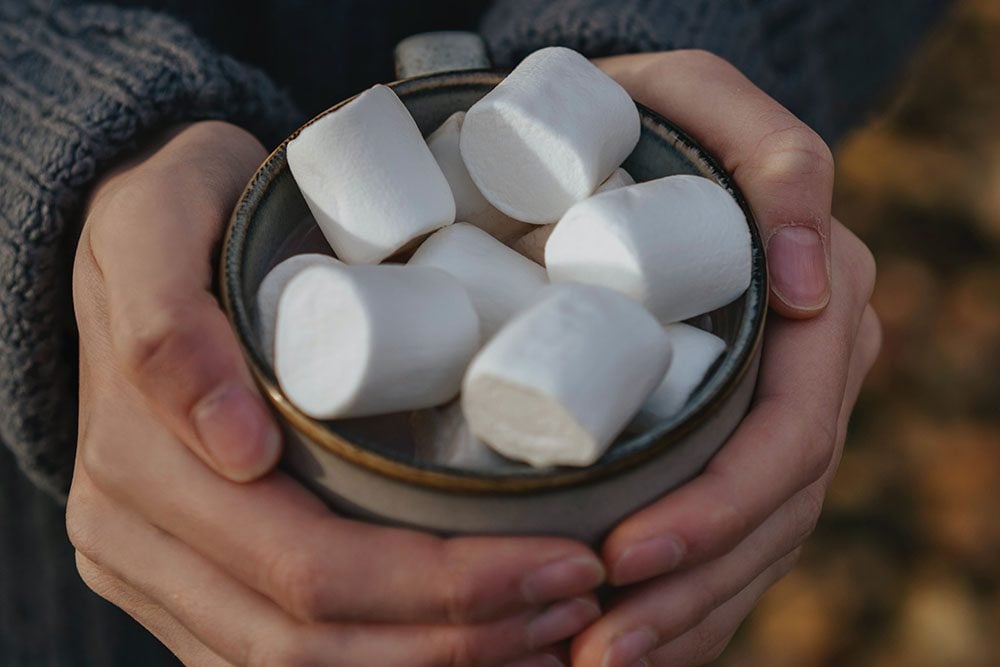 It can be an overwhelming time, but there are so many options available now, you’ll never look back.

Treats were something I struggled with at the start; we all want a sweet treat to round the day off on time!

Today, let’s look at one of those treats in particular: marshmallows. So stick around to find out, are marshmallows vegan?

So are marshmallows vegan or not?

Marshmallows are generally not vegan, sadly. They are made with gelatin, which is a protein that comes from animals, usually pigs.

This makes marshmallows unsuitable for vegans and vegetarians.

The ingredients are usually printed on the back of the packet with gelatin listed. Occasionally, it will say pork gelatin also.

The package should also indicate that it is not suitable for vegetarians or vegans to consume.

Some marshmallows are also made with egg whites, although this is more common in marshmallow fluff available in jars.

Be sure to check the ingredients list to ensure that egg whites are also not listed before purchasing your marshmallows.

However, all is not lost! You can get a vegan marshmallow, which are made without gelatin.

These can be bought online, at supermarkets, or health food stores. Let’s take a look at some of those options now for you.

As we mentioned earlier, there are vegan-friendly marshmallows.

These will use a gelatin alternative that does not harm animals but does not compromise on the squishy and gooey consistency of marshmallows that we love so much!

Dandies are perhaps the most popular vegan marshmallows you can purchase; these are available online, with excellent bundle deals available, or at a local grocery store.

The marshmallows are available in mini or standard form, so you are sure to find the perfect size for dipping or adding to your hot cocoa!

The vanilla flavor on the marshmallows is not overpowering either, so that you can enjoy your delicious treat as usual.

Trader Joe’s Gluten-Free marshmallows are also vegan! These are another popular option you can buy online or at a local store.

These are another popular option for vegans after mini marshmallows.

They feature the same ingredients as Dandies marshmallow, its a vegetarian marshmallow so you should notice little to no taste and texture differences. They use corn syrup in their vegan marshmallow recipe.

Both brands use carrageenan as their gelatin alternative. It comes from dried red seaweed and is sometimes referred to as Irish Moss.

But don’t let the words seaweed and moss put you off; the marshmallow taste is still fantastic! 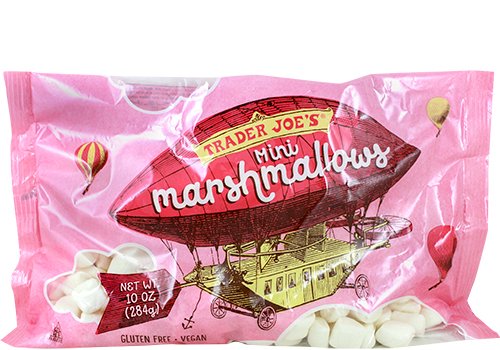 You can also make homemade vegan marshmallows if you fancy challenging yourself! There are many recipes available online to give it a go, and we have one here for you today!

To begin, line your baking pan with parchment paper and dust with powdered sugar. Using a large bowl, combine the aquafaba and cream of tartar.

Mix the two for roughly five minutes, or until the mixture is fluffy and white. It should form stiff peaks.

Next, add vanilla extract and whisk for another 4 minutes until blended. You can set the bowl aside once done.

Take a small pot and place over medium heat. Combine water and agar agar powder, bringing to a light boil.

Be sure to mix it frequently, so the agar agar does not stick to the pan’s bottom. Cook the mixture over heat for 3 minutes, or until the mixture is thick.

Next, add the sugar and continuously stir for three minutes on a light boil. Be careful not to burn the sugar; it will require your attention here.

Once the sugar has dissolved, you can add the mixture to the aquafaba mixture. Be sure to do this slowly and beat on a low setting.

Mix this mixture for 30 seconds until it is thick and combined.

Pour the mixture into the baking pan you lined earlier. Spread the mixture evenly, using a spoon if needed to ensure it is smooth.

Sprinkle the top with powdered sugar. Cover tightly with foil and chill for at least 3 hours in your refrigerator.

It is good to dust the knife with powdered sugar to avoid the marshmallows sticking and maintain their fluffiness.

Slice your marshmallows into squares and remove each square and place them in the dish. Coat each side with powdered sugar and eat immediately.

They are best served straight away, so only cut the squares when you are ready to eat them.

If you want to use this recipe to make s’mores, place a marshmallow between two crackers with a piece of dairy-free chocolate.

Most dark chocolates are naturally vegan and widely available at grocery stores.

You can microwave these in 30-second increments until warm. These homemade marshmallows will not melt but will have the s’more taste we all love.

Store the marshmallows in your refrigerator, keeping them covered, for a maximum of 5 days.

Freezing the mixture is not advised as it will change the structure, leaving you with soggy marshmallows, yuck!

Dandies and Trader Joe’s marshmallows are probably the most accessible, although your local health store may stock other brands too.

You can also make naturally vegan marshmallows at home if you are up to a baking challenge! No longer are marshmallows off the menu for vegans!