Oreos are one of the most popular cookies in the world, and one of the main questions and queries surrounding Oreos is: are they vegan? To put it simply, technically they are vegan - but it’s a little bit more complicated than that.

It’s not all about what type of milk you choose to dunk the cookie in, full fat cow milk or oat milk, because the recipe itself doesn’t contain any dairy or egg products. Technically. If you are already a vegan, or considering transitioning to a vegan diet, you need to know what snacks you can and can’t eat - including Oreos. 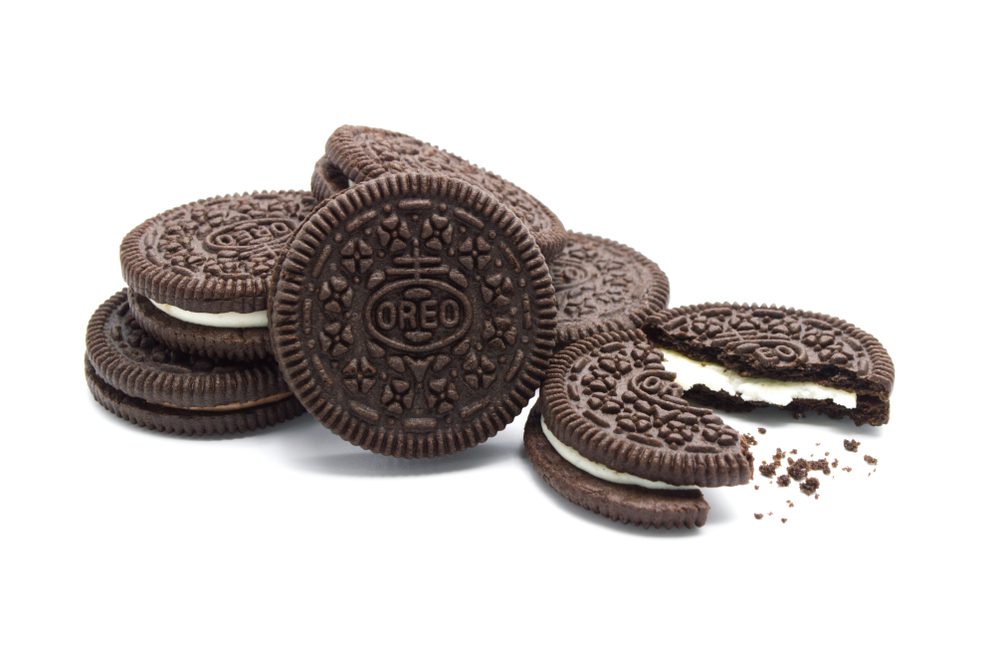 We’ll start by answering the main question: technically, Oreos are vegan because the recipe does not include dairy or egg products. This might come as a shock to some people who assume either the cookie, or at least the cream, would involve dairy - especially as Oreos are marketed to be dunked in milk. The ingredients in an Oreo include:

Despite this, Oreos cannot always be trusted as 100% vegan products. This is because Oreos are made in the same facilities as those who use milk - so there is a risk of cross contact.

Cross contact means that there is always a possibility that Oreos-in-the-making could come into contact with milk, meaning that whilst the recipe is technically vegan, there is no way of confirming or denying that an ingredient has touched milk. This might seem like false advertising, but the official Oreos website has been vocal about this.

Whilst Oreos are technically vegan now, they weren’t always dairy-free. Oreos used to be made with lard - pig fat - but the recipe was forced to change in the 1990s due to health concerns.

They then replaced the lard with hydrogenated vegetable oil, which was also then changed a decade later due to more health concerns from the public, who then convinced Oreos to change to non-hydrogenated oils.

Even still, the recipe was still non-vegan as it included whey protein which is filled with milk proteins. Eventually the recipe became completely free of animal products in 2013 for the UK and 2014 for the USA. Oreos are proof that companies can make their food vegan-friendly from public pressure.

There is always the assumption that vegan food is healthy. A vegan diet promotes the consumption of plant-based goods such as fruit and vegetables, with some awesome recipes that can replicate non-vegan food. Most vegan food is proof that all you need is good seasoning.

This diet is also incredibly beneficial and healthy to the environment for a multitude of reasons - for example, the meat industry is one of the main consumers of water, so a non-meat diet does not contribute to this.

However, vegan food can still be unhealthy. Regardless of diet, people will want to have snacks that soothe their cravings. Oreos are a perfect example of an unhealthy vegan snack, because whilst they do not (technically) include dairy products, the ingredients they do include are far from wholesome. It’s all processed and “fake”.

This is not to say that Oreos should not be eaten, but if you are looking to maintain a healthy vegan diet with healthy vegan snacks, the consumption of Oreos should be minimal. They are a great treat and perfect for satisfying sweet cravings from vegans and non-vegans alike.

So, we have established that Oreos are technically vegan. Whether they are ethically vegan is another debate. Oreos often contain palm oil - a vegetable oil that is vegan and, on the surface, is not made with the abuse or suffering of animals. However, this is far from the truth.

Some vegans only focus their veganism on a plant-based diet, but the majority are also ethical vegans - meaning that every consumption (edible or materialistic) and action has to actively benefit the planet.

The debate with palm oil is complicated and involves both human and animal rights. The palm oil industry is notorious for underpaying, or not paying, their workers. These basic labor rights, amongst others, are abused and highly unethical.

In regards to animal rights, palm oil is a huge contender for deforestation, wiping out vast areas of rainforest which is not only an essential biodiversity for the planet, but renders the land inhabitable for its residents.

So, whilst palm oil doesn’t involve the abuse of animals, forests are burned and destroyed which can subsequently add to the critical endangerment of animals such as orangutans or tigers.

It’s a really complicated debate. It may seem obvious to pressure big companies to use other oils such as coconut or corn, however this will also involve wiping out land and animal habitats. This means that the consumption of palm oil comes down to individual preference, almost in the same way that honey is a vegan debate.

Technically, yes - Oreos are vegan. As milk is a cross contact ingredient in the Oreo making process, this could be an issue for devout vegans or those with extreme dairy allergies, however the recipe itself tries to avoid this.

There is also the ethical debate surrounding palm oil and whether it is morally vegan to consume and contribute to the palm oil industry, but this also comes down to personal preference.

PETA released a statement about products that may contain traces of animal products and, whilst they do not speak for the entire vegan community, they have said it is not a huge problem for vegans to consume foods like Oreos.

Food with traces of animal products does not need to be avoided in the same way as a beef burger. Vegans already contribute enough to the promotion of plant-based diets and preventing the suffering of animals.

So, yes, Oreos are vegan and can be enjoyed by vegans as a nice snack in the same way non-vegans enjoy Oreos. A true vegan Oreo doesn't really exist, though the Oreo biscuit can be considered fully vegan.

I would love to see more vegan Oreo disclosure of Oreo flavors and see Nabisco use more cocoa powder and vegan butter in their products. Maybe even a little powdered sugar would help. They need to watch the dairy product, refined sugar, and artificial flavor.

I for one would welcome maple syrup or coconut milk in their products; maybe a sandwich cookie with natural flavor.