Shining a Light on the Deceptive and Unassuming Fig

Contents show
So, Are Figs Vegan or Not?
Where Do They Come From?
Why Are Figs Not Vegan
Have You Been Eating Wasps?
Do All Figs Contain Dead Wasps?
Why it’s a Darn Shame We Can’t Have Them
Now, Don’t Bring Us Some Figgy Pudding
Related Posts:

There’s something exceedingly rich and extravagant about figs, and it’s not entirely due to their deep, sweet flavor. It’s a decadence compounded by their ubiquity in high culture. While not technically a fruit, rather an inflorescence within syconia, they match apples as one of the most poeticized tree grown foods.

Not only are archaic verses teeming with figgy allusions as in D.H. Lawrence’s, Figs, in which he declares, ‘every fruit has a secret’, and, ‘The fig is a very secretive fruit’, they’re equally, if not more so, sprinkled throughout scripture.

In the creation story, Adam and Eve thread fig leaves together to cover their genitalia, and in Deuteronomy 8, God himself equates them with, ‘pomegranates, olive oil, and honey’. At various junctures, they symbolize sexuality - female in particular - wealth or reward, good fortune, and safety.

From its multitudinous evocations in the Bible, the humble fig plant found its way into religious masterpiece paintings of the Renaissance, most notably, Michelangelo's Sistine Chapel ceiling fresco.

Truthfully, there has never been such a cultural fuss about any other sort of food, besides perhaps the bread of life, but D.H. Lawrence was correct. Figs do indeed hold a secret...but who could have possibly guessed it would be so dark? 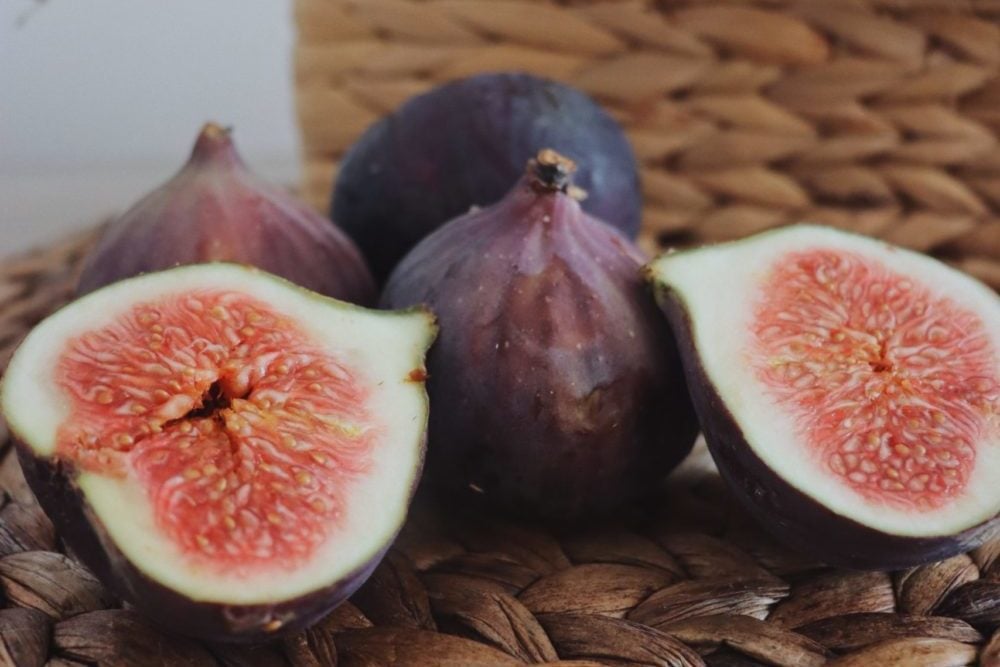 So, Are Figs Vegan or Not?

Without further prattling about figgy histories and symbolism, let’s answer this question concisely as possible...no! Figs are not strictly a vegan food (cue shock and horror). So, if a vegan in your vicinity is raising a fig to their mouth, slap it from their hand immediately! This includes the fresh fig and dried fig.

I know you’re all thinking the same thing that I thought when I find out…But how? It doesn’t make much sense at first, or really any at all. It’s one of the many non-vegan foods you learn about once you’ve already been vegan for a year plus, after having probably eaten a fair few along the way.

Where Do They Come From?

There are roughly 850 species of Ficus tree, collectively referred to of course as fig trees. We eat the syconium of only one, F. Carica. Their sweet and floral flavor, mixed with a wonderfully juicy and crunchy texture make for a delectable treat, and unlike most fruiting plants, fig trees produce year-round.

Why Are Figs Not Vegan

The reason you can’t technically refer to figs as vegan is because of wasps. I know, right...you’d never guess in a million years. The aptly named fig wasp has an age-old pullulation pact with the renowned fig.

Most plants are monoecious, but figs actually have a male/female dichotomy and rely on these unique wasps for pollination. In turn, the female wasp has a safe place to lay her eggs. It’s a mutually beneficial understanding in their genetic code.

Even if this little tidbit has succeeded in giving you a case of the vapours, it doesn’t fully elucidate why they’re not vegan. They’re not the only produce that interacts on some level with insect life, far from it. It would be weirder if they had no business with insects at all.

The full story goes like this. The pregnant wasp discovers a male fig, but to infiltrate it and reach the soft secure center perfect for her wasplings, she must nose through an incredibly small, almost sealed hole.

It’s such a tight squeeze that her antennae are torn off, her wings are ripped from her thorax, and she is doomed to a figgy internment, but to her, it’s worth it. Now she can fulfill her biological imperative by laying her eggs in the fig flowers and die happy, bringing her part of the tragic and triumphant symbiosis to an end.

More tragic still is when a female wasp accidentally enters a female fig. Female figs don’t contain any flowers for her to lay her eggs in. If she doesn’t find a way to escape, she dies inside along with her young. It’s incredibly lugubrious and utterly Shakespearean in tone.

Inside each fig flower is a protective hollow known as a gall. The male eggs eventually hatch into larvae and wriggle their way out of their gall, then search for female eggs in neighboring galls.

They do this in order to impregnate females before they’re even hatched. Some will be the progeny of other wasp parents, but almost certainly, some will be their own siblings.

Once the incest is quite finished, they have one more job: gnaw pathways through the walls of the fig. After that, they too meet their maker in what is now a veritable wasp sarcophagus.

The impregnated females then hatch and wriggle their way through the tunnels to waspdom, exiting the fig and flying off to begin their own lives all whilst carrying oodles of fig pollen with them. The circle of life is complete and tied off with a bow.

There is another kind of wasp known as fig-parasitic. These sinister creatures use ovipositors to penetrate the fig and lay their eggs from the outside. Their young then eat the fig flowers and other wasps, never contributing to the pollination process.

Have You Been Eating Wasps?

Yes and no. First of all, we only eat female figs, so you shouldn’t worry about the hundreds of dead male wasps or incest, phew, right?

Although I’m sure wasps do have a rather distinctive crunch under tooth, that’s actually just the fig seeds; however, as some female wasps do end up mistaking the female fig for a male, there is a chance a wasp has died in your fig.

Don’t bother cutting them all open looking for martyred matriarchs, though. You won’t find them. A special enzyme that the female fig produces breaks the wasp down physically into nothing, but chemically speaking, in some form, it’s still present.

Do All Figs Contain Dead Wasps?

No, not all of them. Figs have been aggressively domesticated by humans during the course of our 11,000-year relationship. Some common figs don’t even require pollination and are completely seedless.

Why it’s a Darn Shame We Can’t Have Them

There’s a couple of reasons why it’s a devastating blow that we vegans can’t eat figs. One is that they’re delicious. The other is that they’re amazingly healthy. They’re not just chock-full of yummy natural sugars and brilliant soluble fiber, they’re rich in numerous minerals including calcium, magnesium, potassium, iron, and copper.

A diet rich with figs and other fruits and veg can obliterate high cholesterol, improve intestinal health, not just with their fiber content, but their natural prebiotic qualities too, and enhance bone density.

There you have it, vegan friends. Some figs may have never known a wasp’s touch, but as there’s no way to be sure, they’re not strictly a vegan product. You thought the only way wasps could hurt you was with their stinger, but they found a way.