Pop Tarts. Even just the mention of them takes us back to our childhood of watching our favorite after-school cartoons with a plate of those delicious, sweet treats.

Contents show
The main ingredients
Are there any vegan-friendly flavors?
What about palm oil?
Frequently Asked Questions
Are Pop-Tarts made dairy-free?
Is there any gelatin included in Pop-Tarts?
Final word
Related Posts:

This childhood staple is still very popular today, and the variety of flavors available is huge - from the well-loved Smores, Strawberry, and Cookie Dough, to the more weird and wonderful concoctions of Jolly Rancher Watermelon and Froot Loops.

For those of you who may not know, Pop Tarts are a delicious toaster pastry, made from a gorgeous short crust puff pastry (similar to pie crust) that encases a variety of gooey, jammy, creamy fillings. A good friend made a homemade pop tart using almond flour, coconut oil, maple syrup, and tapioca starch. It was surprisingly good. I'll share the homemade vegan pop tart recipe shortly.

They are often frosted on top with icing, but there are also unfrosted versions available. Some of them even have added extras such as chocolate chips in them. 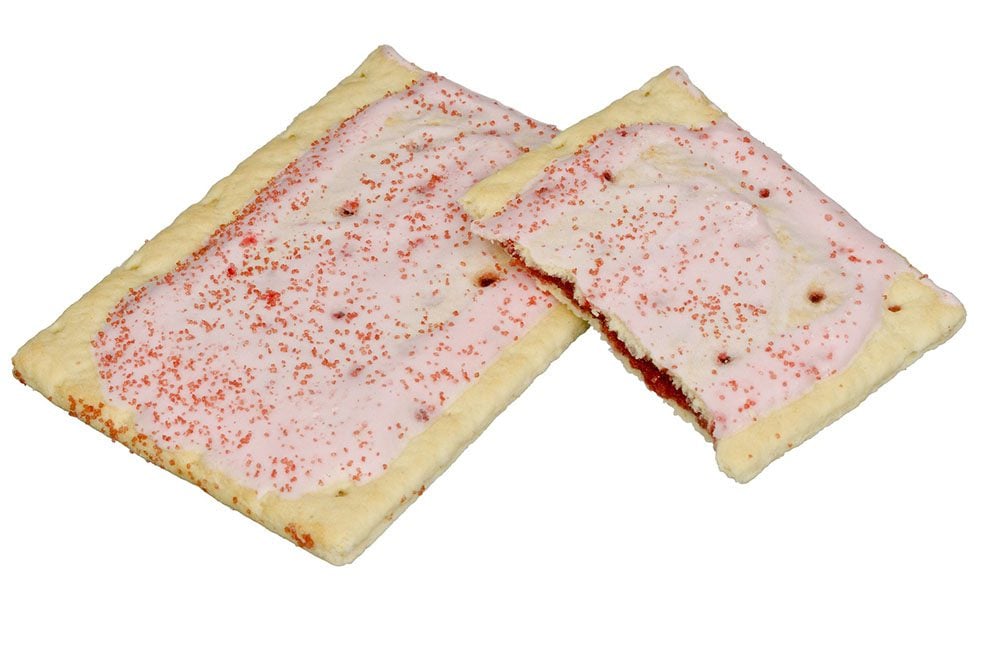 However, whilst Pop Tarts are still rising in popularity, so are the vegan diet and lifestyle.

More and more people are adopting a vegan approach to their eating each year, with challenges such as ‘Veganuary’ (eating vegan for the whole of January) inspiring people to eat animal-free foods.

One of the questions that are commonly asked in regards to Pop Tarts is how they fare in a vegan diet.

We are going to be exploring this in this article, looking at the ingredients in Pop Tarts, making a distinction between different flavors, and then seeing which (if any) are vegan friendly.

Before we start on this, we want to make it super clear that there are many different flavors of Pop Tarts, all of which will have slightly different ingredients.

However, there are some ingredients that remain the same regardless of the flavors.

One of these ingredients is flour. There is an enriched flour used in Pop Tarts containing different vitamins. They also often used high fructose corn syrup in all of their Pop Tarts.

This sets us off in good stead already. That being said, it is upon looking at some of the ingredients that are lower down in the list that we find some issues.

One ingredient that is featured on the ingredient list of a number of Pop Tart flavors is that of gelatin.

Gelatin, for those that may not know, is a jelly like protein that is made by boiling down the fat, skin, and bones of animals. It is a by-product of the meat industry and most often comes from pigs.

It is also common to find ingredients such as milk and egg whites listed on the ingredients list of certain Pop Tart flavors.

This is especially true of any frosted varieties and any that are flavored with chocolate.

Another thing that is worth mentioning is palm oil/. Whilst palm oil does not come directly from animals, many vegans take issue with it because of how unsustainable it is.

Palm oil has featured heavily on news reports over the years because the high demand for it and processes to get it have led to entire rainforests being destroyed, killing off many of the wildlife who inhabit those rainforests such as orangutans.

For this reason, many vegans may try to avoid palm oil in any of their food products. From our research, we have found that all Pop Tarts contain palm oil.

Are there any vegan-friendly flavors?

It is very important to make it absolutely clear that there is no flavor of Pop Tart that has vegan certification.

That being said, there are three flavors that are made without any non-vegan products. These flavors are unfrosted brown sugar cinnamon, unfrosted strawberry, and unfrosted blueberry.

In fact, Kellog’s Pop Tarts social media accounts always recommend these to people who write to them to ask about vegan flavors, such as in this Tweet: 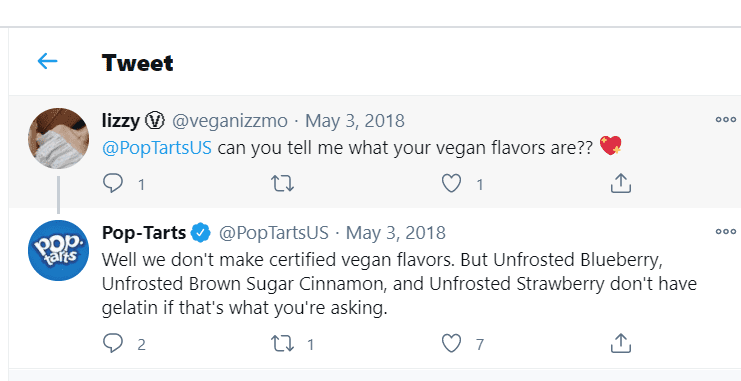 It seems that any frosted Pop Tarts tend to contain milk and gelatin, both of which are products from animals, rendering them not vegan-friendly.

The unfrosted ones listed above, on the other hand, do not contain any animal products, leading us to assume that it is just the frosting that makes them unsuitable.

What about palm oil?

One thing that you should take into consideration though, is that even these unfrosted versions may be unsuitable for you.

It depends on your feelings about palm oil. Even the unfrosted versions of Pop Tarts contain palm oil (in fact, there are countless products containing palm oil out there that would otherwise be totally vegan friendly!).

Remember we mentioned the problems that are associated with palm oil? Well, because of the direct effect palm oil production has on animals, many vegans choose to avoid it at all costs.

This would mean that they would not be comfortable purchasing and eating even the unfrosted versions of Pop Tarts.

Whilst it is not technically considered an animal product, many vegans may take issue with the fact that Pop Tart as a company is recommending palm oil-containing produce for vegans.

Of course, this fully depends on your own personal preferences. Since it technically does not contain any animal products, many vegans who are desperate for the familiar and nostalgic taste of Pop Tarts will happily purchase the unfrosted versions every once in a while.

Are Pop-Tarts made dairy-free?

Pop-Tarts are such a nostalgic snack. They take us back right to our childhood. However, if you have recently discovered that you have a dairy intolerance, you may be left wondering whether you can eat them or not.

Currently, there are a few flavors that are safe to eat if you are lactose intolerant. The flavors include:

In some stores, you can get a multipack that includes all of the frosted fruit flavors that are dairy-free. This is perfect if you have kids that have this dietary requirement as it usually works out a little more affordable too.

As always, make sure that you double-check the ingredients list at the back of your Pop-Tarts. If ingredients get changed then they may add dairy without you being made aware. However, as of right now, these four flavors are safe for people with dairy intolerances.

Is there any gelatin included in Pop-Tarts?

There is gelatin included in the Frosted Pop-Tarts. The gelatin found in these Pop-Tarts is made from beef. This gelatin helps to keep the much-loved texture of Pop-Tarts in order.

If you cannot have gelatin in your diet but are partial to a Pop-Tart - who isn’t! Do not worry as the Plain Pop-Tarts do not include gelatin.

This means that you could eat any of the following Unfrosted Pop-Tarts if you cannot have gelatin in your diet, or even if you follow a vegan lifestyle:

So, if you are vegan make sure to stay away from any of the Frosted Pop-Tarts as they most definitely contain beef-derived gelatin. Instead, keep a lookout for the Unfrosted or Plain versions. These are free from gelatin and still as delicious!

To conclude, we are happy to report that it is not all doom and gloom. Just because you follow a vegan lifestyle it does not mean that Pop Tarts are off the menu.

It does, of course, depend on your feelings surrounding palm oil, but since palm oil is not technically an animal product, many vegans are happy to eat the three unfrosted versions: unfrosted brown sugar cinnamon, unfrosted strawberry, and unfrosted blueberry.

It is good to take note of the fact that often recipes for things can change without warning and without any announcement from the companies, so we always recommend checking the nutrition label and ingredient list first.

This will ensure that you do not accidentally eat a non-vegan Pop Tart. As a rule of thumb, all of the frosted versions are not vegan friendly, and the three we have listed are!