In the strange and wonderful world of candy consumption, only a few select brands are universally recognized and appreciated. From Nerds to Skittles, there are certain candies that everyone just seems to know and love.

And what is more iconic than the Jolly Rancher? These American hard candies were first introduced in 1949 and have remained a popular product of The Hershey Company. But what makes these particular candies so special?

Could it be their vibrant colors? Or is it their iconic packaging? Well, we think it has something to do with the variety of different flavors these candies have to offer. And with so many flavors to choose from, you will always find a Jolly Rancher candy that will meet your tastes. 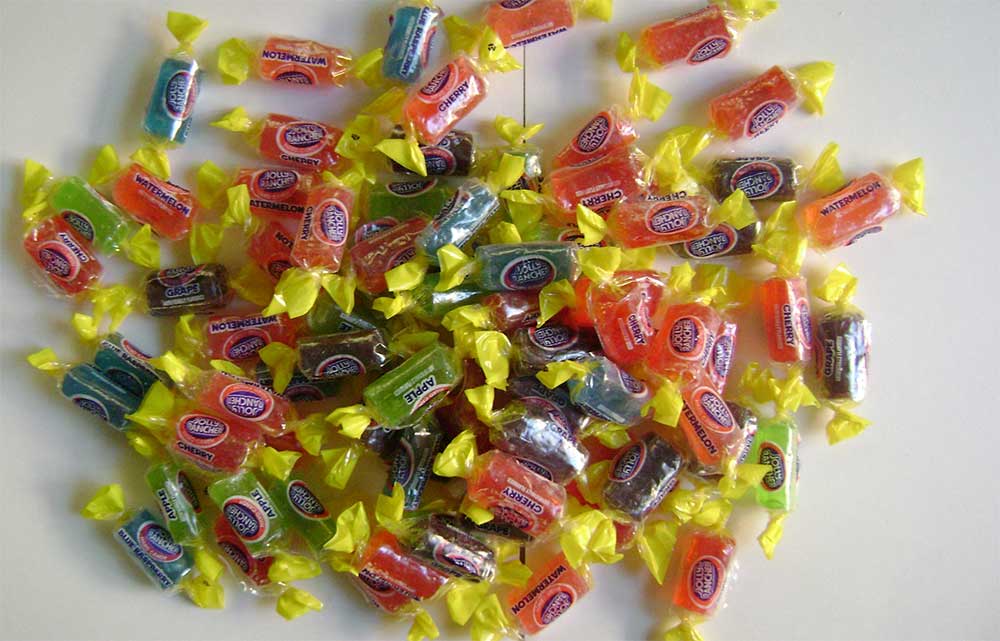 But what are the best flavors of this iconic candy? After all, they have made a lot of them and some are stranger than others. To help you decide, we have created a list of the 13 best Jolly Rancher flavors that everyone loves to eat.

So without further ado, let’s begin!

If there is one iconic candy flavor that truly captures the essence of childhood - it’s blue raspberry.

Not only does this flavor remind you of school days and slumber parties, but it also makes no sense and looks positively radioactive - so what’s not to love?

Blue raspberry is still considered a popular Jolly Rancher flavor to this day and can still be found among the original lineup of flavors.

Although the flavor may not be for everyone, blue food is rare and when you're a kid the Blue Raspberry Jolly Rancher looks like magic.

Once upon a time, cherry-flavored Jolly Ranchers were considered to be the most popular ones - and it seems that still hasn’t changed.

Not only are these iconic red candies smooth and sweet, but they are also known to pack a powerful and sour punch.

Although some people may say they taste like cough medicine, this hasn’t held them back from becoming the most beloved Jolly Rancher flavor in the world.

This might be considered a controversial choice, but we think grape Jolly Ranchers deserve some much-needed praise.

These candies can still be found in the classic line-up and are known for their pungent flavor and purple hue.

Now we understand that grape is not everyone’s cup of tea, but it remains one of the world’s most recognizable Jolly Rancher flavors.

Also, it makes your tongue purple - what more do you want people?

It is a well-known fact that lemon-flavored candy is mainly produced to burn away your taste buds.

However, it seems The Hershey Company took a very different approach when it came to making their delicious lemon Jolly Ranchers.

These bright yellow candies are known for their refreshing citrus taste, which is sweeter and moreish than it is sour and overpowering.

If you have ever tasted this particular flavor, then you’ve probably wondered what a mountain berry even is?

Well, we don’t know and after hours of research, it seems that this is yet another fruit that has been created for the candy market.

And thank goodness it was! For mountain berry Jolly Ranchers arguably taste more like actual fruit than any other flavor of this iconic candy.

Pineapple is often considered an overlooked flavor in the Jolly Rancher world - which is a shame because this tropical candy is incredibly moreish when eaten.

Distinguished by their pale and unattractive appearance, pineapple Jolly Ranchers do not exactly excite the eye.

However, this does not rob them of their delicious flavor, which is sweet, refreshing and tangy.

If you enjoy drinking tropical cocktails or eating Hawaiian pizza - then this is the Jolly Rancher flavor for you.

When Jolly Rancher announced their selection of tropical flavors, we all got a little excited - and for good reason!

Not only does the tropical selection feature the previously mentioned pineapple flavor, but it also contains the superior fruit punch.

Describing the flavor of fruit punch Jolly Ranchers can be a difficult task, especially when you realize that they have no discernible taste.

Fruit punch Jolly Ranchers taste like fruit - and that’s all you’re gonna get. But this still doesn’t mean that these red candies aren’t sweet and delicious in their own right.

Jolly Ranchers are amazing candy, however, they can also be a little overpowering.

If you are the kind of person who tends to avoid sour candies, then they may not be the confection for you.

That is why The Hershey Company decided to release a creamy alternative in the form of Jolly Rancher Bold Fruit Smoothie Flavor.

Although this delicate selection gave us a variety of new flavors to sample (such as mixed berry and orange) we think the peach flavor reigns supreme. We love the peach jolly rancher.

Known for their lush and juicy flavor, peach Jolly Ranchers taste like a freshly-baked peach cobbler and will remind you of summer evenings spent in the park with friends.

Now we go from the sweetest flavor to the sourest. Our next entry is a flavor that is known for its strong and eye-watering taste.

Found only in bags of Jolly Rancher Sour Surge, wild strawberry is a flavor that only hardcore sour lovers can truly enjoy.

But don’t worry, they’re not that sour - we promise.

Cinnamon is a classic flavor that has found its way into a lot of American dishes and confections - it seems we just can’t get enough of this versatile spice.

You have to have a tongue made of steel to enjoy these peppery candies, as they have been known to pack a lot of fire into a single suck.

Although pain is not something you want to associate with a delicious piece of candy, with cinnamon Jolly Ranchers it comes hand in hand.

But it’s good pain and can satisfy even the hottest of palates.

For our next entry, we have decided to go for yet another classic flavor.

There’s probably nothing better to eat than a good old watermelon Jolly Rancher. Not only can the flavor be found among the original line-up, but it also perfectly captures the essence of the long summer months.

The flavor of this particular candy is sweet and tangy, and yet it does not feature the medicinal undertones that are often associated with the brand.

Watermelon Jolly Ranchers taste nothing like actual watermelon, and yet they will still leave you craving a slice of the delicious fruit. The watermelon flavor is my favorite.

If you prefer your candy to have a bright and almost floral flavor, then there’s nothing better to eat than orange-flavored Jolly Ranchers. The orange Jolly Rancher is a perennial favorite.

These vibrant and neon-colored candies are known to be fresh and vibrant in their taste. However, you may notice that they taste more like orange soda than they do the actual fruit itself.

Unfortunately, orange Jolly Ranchers are very hard to come by and you may not be able to purchase a bag anytime soon.

But if you see these amber beauties in your local grocery store, then you should sweep them up as quickly as you possibly can.

And we end with yet another iconic Jolly Rancher flavor.

Green apple is the definition of a crowd-pleaser, not only is it sour and pungent, but it also gives way to a rich sweetness the more that you suck on it.

With a taste that is reminiscent of a Granny Smith apple, this particular Jolly Rancher flavor is still part of the original line-up for a reason.