It’s notoriously difficult to explain exactly what different types of fish taste like. Whilst the taste of some of the most popular fish like cod or tuna is reasonably easy to recognize, it’s far from easy to provide comprehensive detail on some of the lesser known varieties of fish.

This guide will focus on salmon - a very popular and well-admired fish across the world, but an incredibly difficult one to define.

Salmon is a large fish that can measure more than a meter and a half in length, as well as up to 30 kilos in weight. Its skin is typically thick, gray with silver on its belly, and dark spots on the head and back.

In terms of its exact taste and texture, it all depends on factors such as species, farming method, cooking approach and time of the year. Generally, salmon has a high content of omega-3 fatty acids, so provides an aromatic, rich, oily taste. 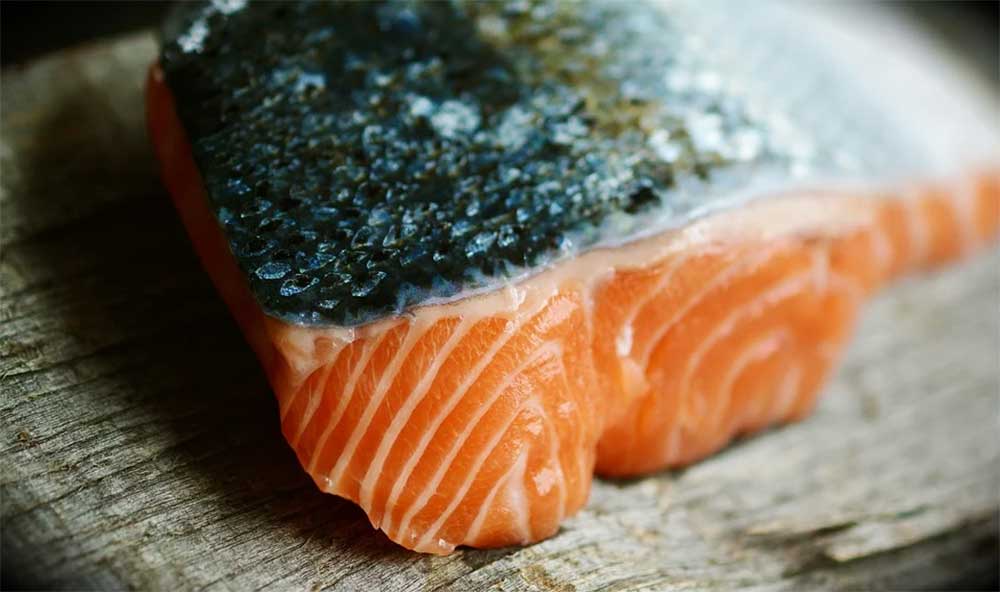 While salmon was widely consumed by the Greeks and Romans, it was the people of Northern Europe who valued the oily fish in the highest esteem.

Until the 18th century, salmon was plentiful in all rivers. However, the construction of dams, as well as higher levels of pollution, have made it almost disappear. Now, salmon farming makes it possible for the delicious fish to reach local markets at an affordable price.

The type of salmon most commonly consumed is the Atlantic salmon. Some of the less common types include North Pacific Pink salmon, Keta and Alaska Red salmon.

Salmon is a full-flavored oily fish with a high percentage of good saturated fats. In terms of its color, it can range from pale white to dark red.

If you aren’t particularly well-versed when it comes to salmon, and are unsure about which type is best suited to your taste, the color is a useful guiding factor. This is because it’s possible to know a fish’s flavor by the color of its uncooked meat.

As a general rule, the whiter or lighter the color, the milder it tastes. Therefore, if you’re not too sure about the taste of fish and want to ease yourself into eating it, it’s recommended to try the white meat variety first.

Salmon changes color to its more recognizable orange or pink color due to a krill-heavy diet. However, for farmed salmon, the color and taste of the fillet can change depending on the feed they receive.

Types and Tastes of Different Salmon 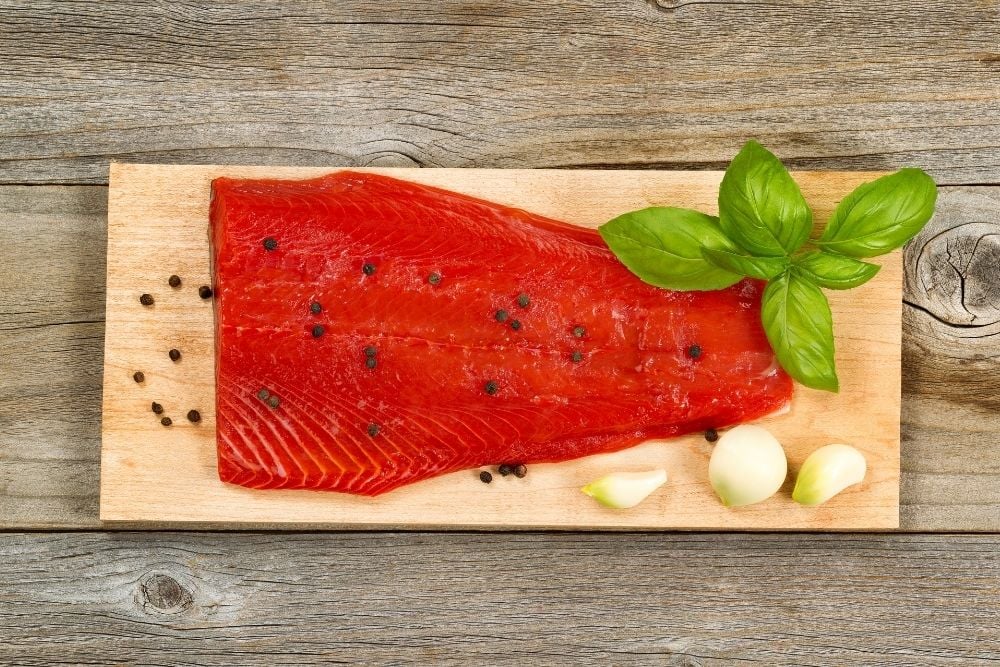 As mentioned above, the taste of salmon can vary. This is usually dictated by how it’s prepared and what’s added to it. It’s worth noting that pre-packaged salmon tastes a lot different to fresh salmon. Fresh salmon ranges from subtle to mild in taste, and differs based on the type of salmon used.

Cold water contributes to increased fat content, which subsequently results in an oilier texture and a more powerful taste. To put it simply, the higher the fat content of the fish, the richer the taste. A diet consisting of smaller, saltier fish is another factor which enhances the full-bodied flavor of salmon.

This is the biggest type of salmon in the world. It’s also the best tasting according to a number of people. If you’re lucky enough to eat an ocean-caught King salmon, you’ll be guaranteed the full experience when it comes to flavor. As I’ll address a little further down, the taste of a King salmon is less intense than that of Red salmon.

This type of salmon is named after its particularly silver skin. In terms of flavor, it’s very similar to King salmon, and is instantly recognizable due to its bright red flesh.

Red salmon, as the name suggests, has vivid, dark red flesh. It’s also highly flavorful and richly textured. If you enjoy the taste of salmon, this is a great choice for you because of its pure and strong taste.

This is the most common type of salmon found in the Pacific. They typically have a lower fat percentage and lighter colored flesh than most other salmon. They are also often referred to as “Humpback salmon” due to the distinctive hump they have on their back during their spawning process.

The Chum or Dog salmon is an ideal choice for those who don’t like the intense fish taste. In comparison to other types of salmon such as the Chinook and Sockeye, this type has a lower fat content and a much milder, more delicate taste. It’s therefore suited for recipes which retain moisture like curries and soups. 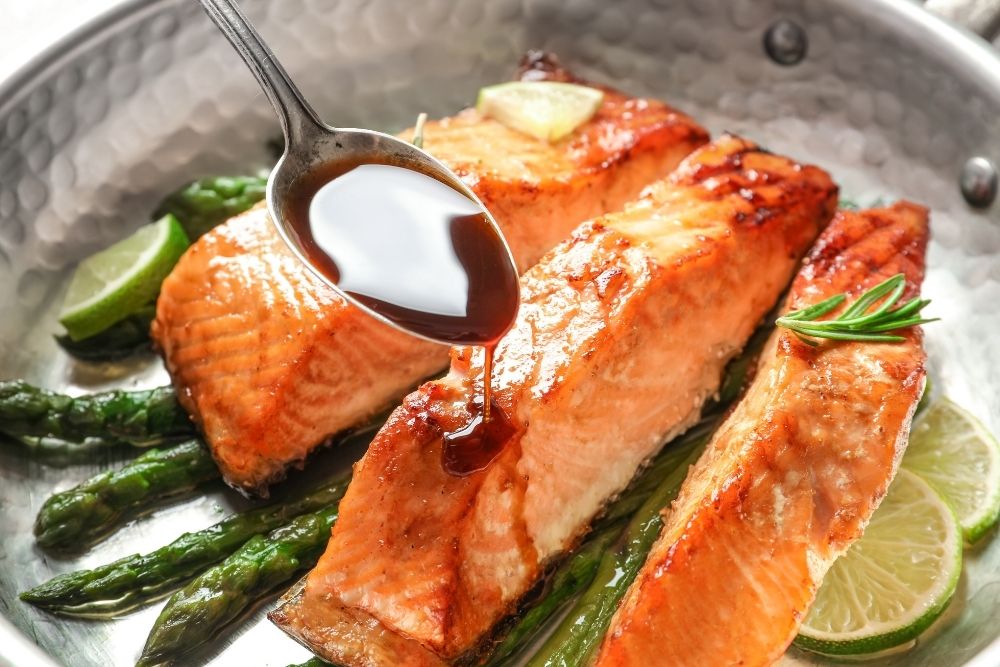 There are a number of different ways to effectively cook delicious-tasting salmon. It all depends on the type of salmon that you’re dealing with. If you have Pink salmon, you’ll be rewarded with the best results if you fry or roast it. Red salmon is better suited for sushi and sashimi, whilst Atlantic salmon, the most versatile of the lot, is great for oven-baking, searing, pan-frying, grilling, and much, much more.

Whilst salmon may be one of the more expensive types of fish on the menu when you go out to a restaurant, if prepared correctly, it can compete with any slab of high-quality meat. It’s one of the healthiest fish to eat, in particular wild-caught salmon. I’ll now run you through a few of the most popular methods of cooking salmon from home.

This is a method well-suited for cooking salmon fillets. It’s also a good method for those who aren’t the most adventurous in the kitchen as it’s quick and easy to do.

To start, you’ll need to season your salmon with salt and pepper, maybe a little bit of olive oil (highly recommended), and some butter. It’s then fried in a hot skillet over a medium-high heat.

Begin skin-side up and leave it for around five minutes. Then, flip the fillet and cook it skin-side down for a further three minutes. This is essential for crunchy, crispy skin. Finally, squeeze a small amount of lemon juice over the top of the salmon and enjoy.

Grilling is another simple way to cook salmon. It’s also great for cleaning up quickly afterwards.

Start with hot coals and put your salmon skin-side down on the grate. To turn it, use a spatula or a similar instrument and put it beneath the fish. If the flesh of the salmon is still sticking to the grate, leave it for another couple of minutes. Once flipped, cook the salmon for another five or so minutes.

If you prefer not to fiddle around too much with your food whilst you cook, oven-roasting your salmon may be a good option. It’s fast, no-nonsense, and great if you’re cooking for a few people. This is because it’s relatively easy to fit a few fillets in a baking dish at a time.

The basic method of roasting salmon is to first season it with salt and pepper, then place it skin-side down in a lightly greased baking sheet pan. It’s worth noting here that you can just as effectively use a dish. Then, bake it in the oven for 12 to 15 minutes at a temperature of 400℉. Unlike the previous two methods, there’s no need to flip the fish. 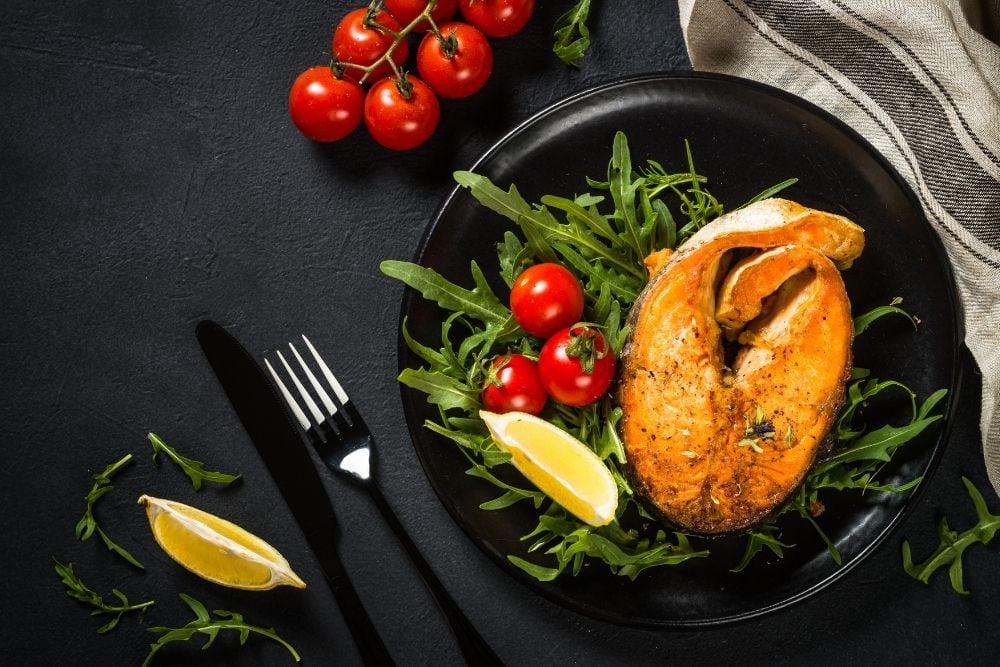 Although salmon has a less fishy taste than a lot of other fish, some people still find the flavor too strong. Luckily, there are a couple of tips and tricks to help reduce this fishy taste.

One method is to soak your salmon in milk for 20 minutes prior to cooking it. This is because milk has a protein that binds with the fishy odors, thus extracting them from the salmon fillets. What’s left behind is a cleaner-tasting, sweeter salmon.

Another way of effectively masking the taste is to squeeze fresh lemon juice over your cooked salmon. If however, lemon isn’t your thing, there are a number of sauces you can prepare to pour over the finished dish.

A popular one is greek yoghurt mixed with fresh dill, along with some lemon juice and garlic powder. This can be poured over your salmon to eliminate some of the fishy taste. Sweet honey and brown sugar can also be used to improve the flavor and make the fish easier to eat.

The freshness of salmon is essential, with the quality of fish meat liable to deteriorate much quicker than that of other species. Therefore it’s important to ensure your fish is as fresh as possible, and recognize some of the telling signs that suggest it’s past its best.

The first consideration to take into account is how it’s been kept. Every leftover fish which hasn’t been refrigerated properly should be discarded. The same applies to fish that are older than three days.

Another good indicator of a fish’s freshness is the cloudiness of their eyes. The eyes of a fresh fish should be clear, so if they aren’t it probably means that the salmon was caught more than five days ago and has already started to deteriorate.

Perhaps the easiest way of telling whether your salmon is okay to eat or not is the smell. Always smell your raw salmon to see if anything is off - your senses are a vital tool so use them. If the meat of the fish has a strong ammonia odor, then it isn’t suitable for consumption. Fresh salmon won’t smell particularly strong.

Also look for a whitish sheen on the top of your salmon. If this is present and the top of the meat looks slimy, it’s probably your safest option to throw the fish away.