The world has gone crazy for mochi.

Contents show
What Is Mochi?
What Is Mochi Made Of?
What Does Mochi Taste Like?
How to Make Mochi
Ingredients 1x2x3x
Instructions
Notes
Nutrition
Best Mochi Recipes
Mochi Ice Cream
Sakura Mochi
Mochi Donuts
Frequently Asked Questions
Is mochi healthy?
What is mochi ice cream?
Is mochi vegan?
Related Posts:

This inconspicuous Japanese dessert has been the talk of the town for quite some time now. But if you’re still unfamiliar with mochi, you may be a bit confused about what is happening.

What is in mochi that has made the entire culinary world lose its mind over it?

Well, where should we even begin?

For starters, let’s explain what mochi is. Then, we’ll tell you more about how it tastes, and if you’re curious enough, you’ll also learn how to make it and where to add it.

Buckle up, then. We’re flying to Japan.

It is made of mochigome (short-grain rice) or sweet glutinous rice flour and has a firm rooting in Japanese culture, where it’s considered a “food of the Gods” and a symbol of good fortune.

Traditionally, mochi is made in the pounding ceremony of mochitsuki and is a customary food for the Japanese New Year. It is eaten all year round, though, being one of the most popular types of wagashi – Japanese sweets.

What Is Mochi Made Of?

Mochi consists of mochi dough filled with a sweet filling.

The primary ingredient of traditional mochi is mochigome – short-grain japonica glutinous rice. The rice is pounded into a paste and molded to the desired shape during the pounding ritual called mochitsuki.

Mochi can also be made with glutinous rice flour, as well as the addition of sugar, water, and cornstarch. It is also often tinted with matcha and other food colorings.

If prepared correctly, words can’t do mochi justice. It’s tender and chewy, with a slight rice flavor. The filling is creamy and sweet. It’s as close to perfection as you can get. 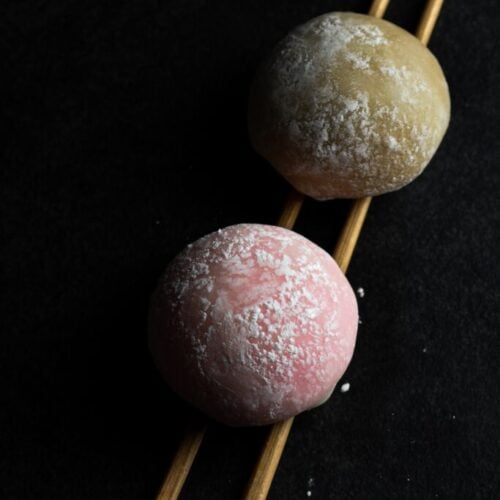 How to Make Mochi

Although you can find mochi in every cafe or pastry store, we strongly recommend sparing a moment and making it yourself at home. It's easy to prepare and provides a lot of fun.And most of all, nothing can beat the taste of your homemade dessert, be it mochi, chocolate cookies, or a cheesecake.
5 from 6 votes
Print Recipe Pin Recipe
Total Time 15 mins
Course Appetizer, Dessert, Drinks
Cuisine Asian
Servings 4
Calories 143 kcal

Calories: 143kcal
Keyword How to make mochi
Tried this recipe?Let us know how it was!

Now that you know how to make delicious mochi dough, here are some mouth-watering recipes for you to try out.

Mochi ice cream is by far the most popular variation of this traditional Japanese snack. To make mochi ice cream balls, use our recipe above but use a scoop of ice cream as filling and freeze them before eating.

Sakura mochi is extremely popular in Japan. This form of mochi is traditionally eaten on Japanese Girl’s Day, also known as Hinamatsuri. They are made of sweet glutinous sticky rice filled with sweet red paste and wrapped in a young pickled sakura leaf.

Fried, chewy, and comforting. Mochi donuts will stay in your kitchen repertoire for years. Trust us on this. The recipe here is very similar to the one provided above, although it will also require salt, hot water, and baking powder in addition to typical mochi ingredients. You also fry the donuts instead of baking them.

Well, since mochi is a dessert in the full sense of the word, it’s not exactly the healthiest food option out there. It’s high in sugar and calories, but it can be a nice addition to your well-balanced diet if you use healthy fillings.

What is mochi ice cream?

Mochi ice cream is nothing else than a traditional mochi with an ice cream filling instead of red bean paste.

It was invented by Frances Hashimoto – a Japanese-American businesswoman and community activist. Introduced in the early 1990s, mochi ice cream became an instant hit across the US. It has recently experienced a resurgence following a viral TikTok trend.

Yes, traditional Japanese mochi is 100% vegan as it only consists of glutinous rice and red bean paste. As for other variations of the snack, it depends on the filling, which can use dairy products (e.g., mochi ice cream).

In most cases, however, mochi is vegan-friendly and gluten-free, despite using glutinous rice.