Dessert is a staple part of a family meal for us on a special occasion or at the weekends. We all get together and bring a dish to serve up.

For many dessert fans, cheesecake is almost a sacred word, which can be a bit intimidating for novice and even experienced cooks when preparing this dish. A perfectly made cheesecake can make you cry out to the heavens in bliss-filled exaltation.

However, one that's undercooked, overcooked, or badly prepared can send you crashing down to earth real fast. But worry not, because you're about to learn the secret to making incredible cheesecake certain to make even the staunchest critics your biggest fans after just one bite. Best of all, this recipe does something a bit different from others you'll find

Whoever gets to make the dessert is always the winner and the most loved person at the dinner table. If you don’t class yourself as a star baker, then a cheesecake is always a great option.

Cheesecake is simple to make and in some recipes, you don’t even have to bake them. Doesn’t that seem like a dream? Serving up a cheesecake with some single cream drizzled over the top is simple and delicious.

Also, infusing different flavors into your cheesecake can be super effective and turn out to be a winner for your family. For example, peanut butter or lemon flavors are so tasty!

In today’s post, we’re going to share with you all some alternatives to sour cream that you can use in your recipe.

A great thing about our substitutes is that they don’t hinder the flavors or textures too much. So, you can still enjoy one of the best dessert dishes in the baking game! 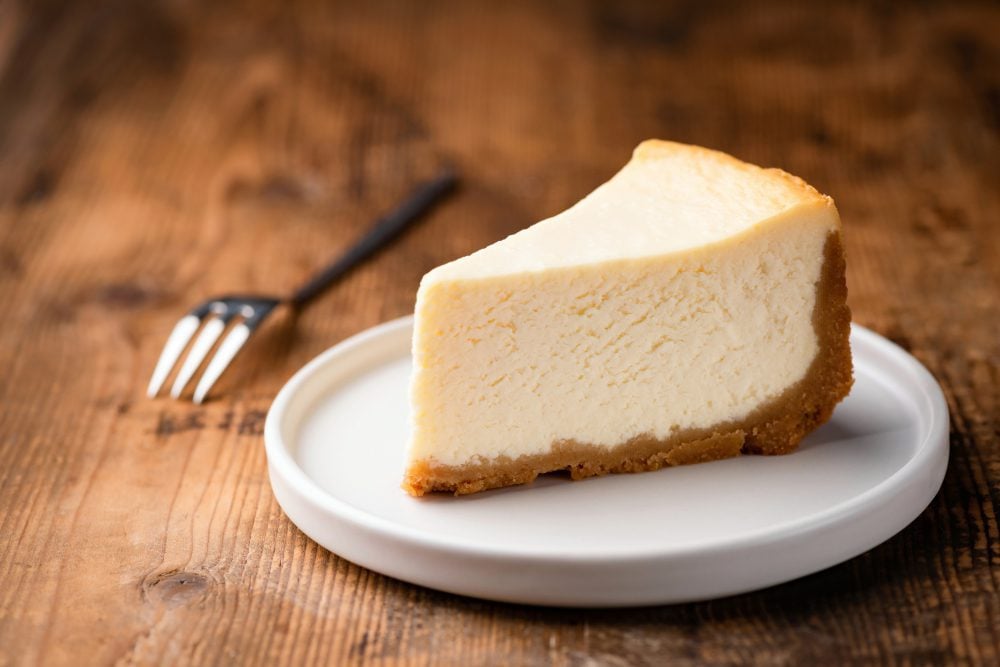 Why does cheesecake contain sour cream?

When you search online, you will find sour cream in a lot of the recipes. Of course, sour cream is there for a reason but is it an essential ingredient?

We’re going to be honest with you, sour cream is good in cheesecake. The only problem is that it is quite difficult to get hold of. Many stores don’t even sell it!

This is why we want to share with you some alternative ingredients which will give you similar results to your cheesecake. But first, we need to take a deep dive into why sour cream is included in cheesecake, to begin with?

Many French cheesecake recipes include sour cream. We all know how well the French does desserts! There are three main reasons why sour cream is added to a cheesecake.

The reasons are to create a creamy consistency, to stop it from drying out so quickly, and to create a tartness to the flavor.

If you take a bite into a cheesecake and it is quite solid, then you know that the person who has made it hasn’t added enough of the dairy ingredients.

This is where the sour cream or substitute ingredients would come into play. These ingredients add a creamier texture to the topping making it an absolute delight to eat.

As cheesecake is usually made in large batches, you pretty much always have leftovers. That is, unless you have a huge family gathering or if you have a big sweet tooth!

Cheesecake will last for three to four days if stored in the fridge. It is great to snack on throughout the week if you’re feeling the need for something sweet.

If the recipe isn’t up to scratch then you do risk your cheesecake from drying out too quickly. You can tell if your cheesecake is dried out by the look and texture of your topping. It may seem rubbery or slightly discolored.

Lastly, by adding sour cream you will get a slight tartness in the flavor. This is usually a welcomed trait of a cheesecake as the rest of the ingredients can be very sweet.

Our alternative ingredients will also provide this flavor as it is a signature part of a good cheesecake.

Sour cream seems like a good thing to add to your cheesecake, doesn’t it?

The thing is, not everyone loves the taste of sour cream, and sometimes it is a nightmare to try to find at the store.

If you are in a rush, we have two recommendations which act as alternatives to sour cream.

These ingredients are much easier to find at the store and still provide the good qualities that sour cream brings to the table.

The first substitute that we are going to discuss is Crème Fraiche. This is probably the closest alternative to sour cream that you will find. It is easier to get in stores than sour cream so it is a great option if you’re struggling.

The taste that Crème Fraiche adds to your cheesecake recipe is so similar to sour cream. It is still a dairy product that adds a slight tang to your cheesecake topping. It completely balances the sweetness of the rest of the cheesecake with a little punch of sour.

Crème Fraiche will also give a comparable texture to your cheesecake. It is a similar consistency to sour cream so your cheesecake will be creamy when you take a bite into it.

There may be some stores that do not sell Crème Fraiche but it is very rare. If you can’t find it, you can use our second substitute which you can find with ease and you probably have some in your refrigerator right now.

You didn’t see this one coming, did you? That’s right, you can use Greek yogurt in your cheesecake recipes.

One thing to take into account is that it must be full-fat. If you search for healthy cheesecake recipes, they usually include this ingredient. It is popular to add this into your cheesecake topping instead of sour cream.

Greek yogurt does have a different consistency to sour cream so you have to get the full-fat version to get the best results. This is because the high-fat content in sour cream helps to create the perfect texture for your cheesecake.

We like to bake our Greek yogurt cheesecakes to set the filling. However, you can also add in some thickening agents to get a similar effect.

The taste will be similar to that of sour cream. Greek yogurt does have a slight tangy taste to it which works well with all of the sweet ingredients added into the mixture.

Greek yogurt is sold in most grocery stores so you can make a delicious cheesecake without the difficulty of hunting down a carton of sour cream.

How to make cheesecake without sour cream

From the two above options, we believe that Greek yogurt will be much more accessible.

Greek yogurt produces a delicious result and doesn’t compromise the taste or texture.

If you would like to know how to make a cheesecake without sour cream, keep reading for our recipe!

Our favorite recipe serves 10 people and does require baking. It is so good! You will not be disappointed.

We hope that you enjoy your cheesecake made without sour cream.

Today you have learned that sour cream is not essential in a cheesecake recipe and that there are some equally as good substitutes out there!

Now, sit back, relax, and enjoy a slice of your delicious cheesecake! 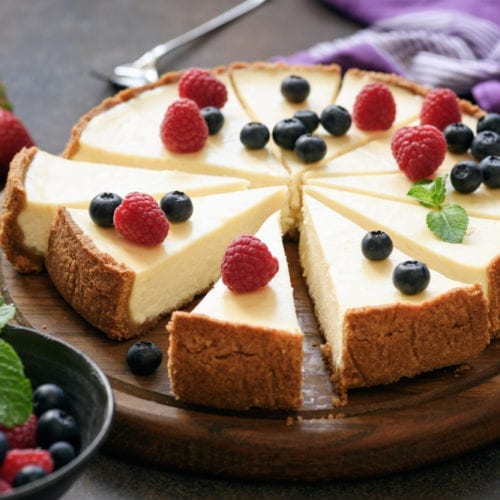 For the cheesecake topping:

Calories: 258kcal
Keyword Cheesecake, Cheesecake Without Sour Cream
Tried this recipe?Let us know how it was!