Cream cheese is a soft, mild cheese that is made from a combination of milk and cream. As a versatile ingredient, it can be enjoyed in both sweet and savory dishes.

First, how is cream cheese made? Here’s something that may surprise you. You can actually make cream cheese at home, but you probably won’t have it ready in time for tonight’s cheesecake because it’s a timely process. For making cream cheese, lactic acid is added to cream and pasteurized milk.

The lactic acid lowers the pH of the mixture, and it starts to form curds. Once the cheese curds are heated, it’s time to add stabilizers, and that’s when this unique mixture becomes cream cheese. The best thing is that cream cheese doesn’t require aging as other cheeses do, so it’s ready to go.

From sauces to cheesecakes or a topping on your breakfast bagel, it’s something that many of us love and others dislike.

Are you looking for a substitute for occasions where you reach for the cream cheese only to find that it has run out, or perhaps you’re looking for a healthier option that doesn’t have such a high-fat content but shares a similar taste and consistency?

If this is the case, we have created a guide below filled with all of our recommendations for tasty cream cheese substitutes. 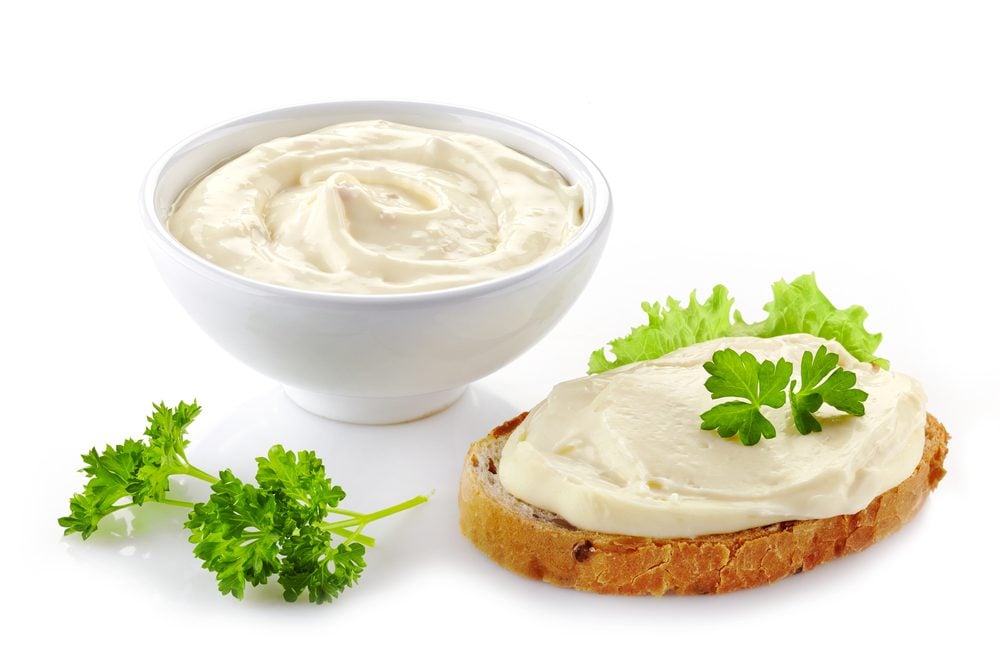 What is cream cheese?

First, you must know exactly what it is that you are substituting. Cream cheese is a variation of fresh cheese that contains at least 33% fat and 55% or less moisture.

It has a soft and smooth texture that is very similar to that of mascarpone cheese. Although it is identified as a mild cheese, it also has a slight tang to it.

While cream cheese is low in lactose and a good source of Vitamin A, it doesn’t contain a lot of protein and is high in fat.

Because of this, it should be used in moderation, or you can also look for healthier alternatives that provide the same great taste with a similar texture.

The first and perhaps most commonly used substitute for cream cheese is Neufchatel. It differs from cream cheese in the sense that it only contains 23% of milk fat.

Although it is a semi-soft cheese, it has a slightly firmer texture than cream cheese but it can still be spread onto your toast or bagel or used to compliment any baking recipes that require low fat cream cheese.

While it may not be as flavorsome as actual cream cheese, it is higher in calcium making it a healthier option.

Mascarpone is an Italian soft cheese that very much resembles the appearance of cream cheese. While it can be applied in a similar way to cream cheese, it has a looser, velvet-like texture.

Although mascarpone is rich in calcium and low in sodium, it is high in fat content and so it may not be the healthiest alternative.

Mascarpone is often used as an ingredient in sweet dishes, but the rich texture makes it a great option for savory dishes too.

Cottage cheese is another fresh cheese product that has a mild flavor and is rich in potassium, calcium, B vitamins, and folic acid, thus making it a healthy alternative to cream cheese.

Although this cheese is wet, it has a chunkier texture when compared to that of cream cheese. The fat content of the cheese is going to depend on the fat of the milk that has been used to make it.

Even though the texture of cottage cheese is lumpy rather than smooth, it still has a spreadable consistency that can be applied to your toast or bagel.

As cottage cheese isn’t as sweet as cream cheese it works best with desserts.

Ricotta Cheese is a soft Italian cheese that is often used interchangeably with cream cheese.

Containing around 10% fat and less salt than cream cheese, it is a healthier alternative with a milder flavor that can be used in either savory or sweet dishes.

It is a firmer cheese that has a lumpier consistency too. Because of the flavor and texture of ricotta cheese, you may feel that it works best when added to your baking recipes.

Sour cream is another product that can be used as a substitute for cream cheese.

This product is made from fermenting cream and has a tangy taste which makes it a great alternative as it restores the delicious taste of cream cheese.

Although it is a great choice for dips and many other recipes, the lactic acid may not make it a worthy choice for frostings.

There are some light variations of this cream that contain around 10.5% of milkfat. Because of the thicker consistency and texture, this product works well as a substitute, however, you will likely notice a difference in the taste as it is a little tangier than cream cheese.

This issue is likely to be eradicated by making some adjustments to your recipe to balance out this difference in taste.

There are many brands that are now venturing out and creating vegan cream cheese as an alternative to an ordinary option.

As expected, these products do not contain the dairy that is typically used. Cheeses of this kind have many health benefits as they tend to be less fatty and they don’t affect cholesterol.

Hummus is also an excellent option for those looking for a dairy-free substitute.

Not only is hummus low in fat, but it also contains many great nutrients such as vitamin B and iron and it is also packed with a lot of fiber and protein.

Hummus is made from pinto beans and has a light and fluffy texture that can be used as a replacement in dips and also to top savory food items like bagels.

It can even be used in desserts like cheesecakes.

Cream cheese isn’t an ingredient that comes up all that often in recipes. But when it does, it is difficult to replace. Cream cheese doesn’t usually have much flavor. And it is a creamy flavor that can be easily replicated.

It is the consistency of cream cheese that needs the most consideration. Especially when making something like a cheesecake. As the name suggests, the cream cheese element is pretty essential. But, there are still some options you can choose from.

Can I use milk instead of cream cheese?

This depends on the purpose of the cream cheese in the original recipe. If it is just to add in some creaminess, for example, into a pasta sauce. Then milk can work sometimes. However, it will be much thinner than cream cheese.

So the level of creaminess and the thickness of the dish will completely change. Milk will add in some creaminess and lighten the color of the dish. But it will not thicken it. If you heat the milk, it will become slightly thicker. But nowhere near enough to mimic the consistency of cream cheese.

Overall, milk isn’t a great substitute for cream cheese. It can mimic the flavor. But the thin consistency of milk means that it will just not be the same.

Can I replace cream cheese with sour cream?

This is a great replacement for cream cheese. But only in some recipes. Sour cream can be used to add creaminess to a dish. Such as a sauce. It will still be thinner than cream cheese. But the difference in consistency will be nowhere near as great as with milk.

Sour cream will also taste different from cream cheese. Sour cream itself isn’t really that sour in flavor. It has a tangy and tart flavor. But it isn’t sour in the same way as a lemon.

Overall, sour cream is one of the best substitutes for cream cheese. It isn’t perfect. But, if you have no other option. Then it’s definitely worth a try.

Can I use Greek yogurt instead of cream cheese?

The main issue comes from the flavor. Greek yogurt can sometimes have a very specific flavor, like most other yogurt. This can usually be disguised if you’re using other ingredients. So yogurt can be great in something like a dal.

But perhaps not in a cheesecake or pasta sauce. Yogurt is always a great (and often healthier) choice for sweet dishes. But should be used sparingly in savory dishes.

Can I substitute butter for cream cheese?

This depends on the recipe. But the answer is “not really”. Butter has a very different consistency to cream cheese. It has a lot of fat and is much thinner when melted. So if you’re heating the butter, then it will melt down.

If you’re icing a cake, you can swap out cream cheese for butter in the frosting. It will have a slightly different consistency. And, depending on the type of butter you use, it can also affect the color. Butter is the best swap for cream cheese in frosting. But not in many other dishes.

There are many cream cheese substitutes available. Whether you’re looking for a different option due to health and dietary reasons or personal preference, there is a selection to choose from.

Cream cheese has a higher fat content which can be off-putting to some people, however, our list has identified that there are many healthier alternatives available.

There are also options that are great for those following a vegan or dairy-free diet, hummus being one example and specific vegan cream cheeses being another.

Regardless of your reason for opting for a cream cheese substitute you are bound to find one option from our list that caters to your preferences.

When looking for cream cheese substitutes there are many options depending on your recipe. Neufchatel cheese, goat cheese, crème fraiche, coconut milk, plain yogurt, strained yogurt, heavy cream, whipped cream, heavy whipping cream, and evaporated milk can all be used as a cream cheese replacement depending on the cheesecake recipe or other recipe. The cream cheese alternative is everywhere. You can even try homemade cream cheese or dairy free cream cheese for your substitute cream cheese. The possibilities are endless. 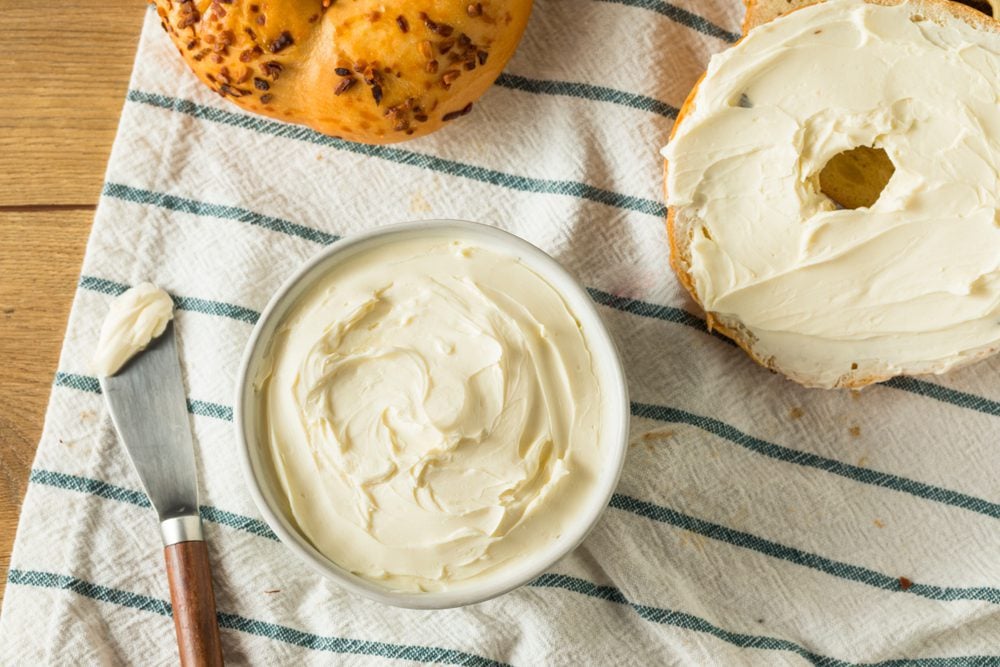 These options are sure to be a hit. So, gather your family and friends and enjoy. Let us know your thoughts!
4.86 from 7 votes
Print Recipe Pin Recipe
Total Time 4 mins
Course Substitute
Cuisine American
Servings 4
Calories 123 kcal

Calories: 123kcal
Keyword cream cheese substitutes
Tried this recipe?Let us know how it was!