Sour cream is a great, versatile dairy product that can add the finishing touch to copious recipes, especially when it comes to making homemade nachos, chili or the base for French onion dip!

You might think of sour cream as a staple in Mexican cooking, yet it can be used for so much more! 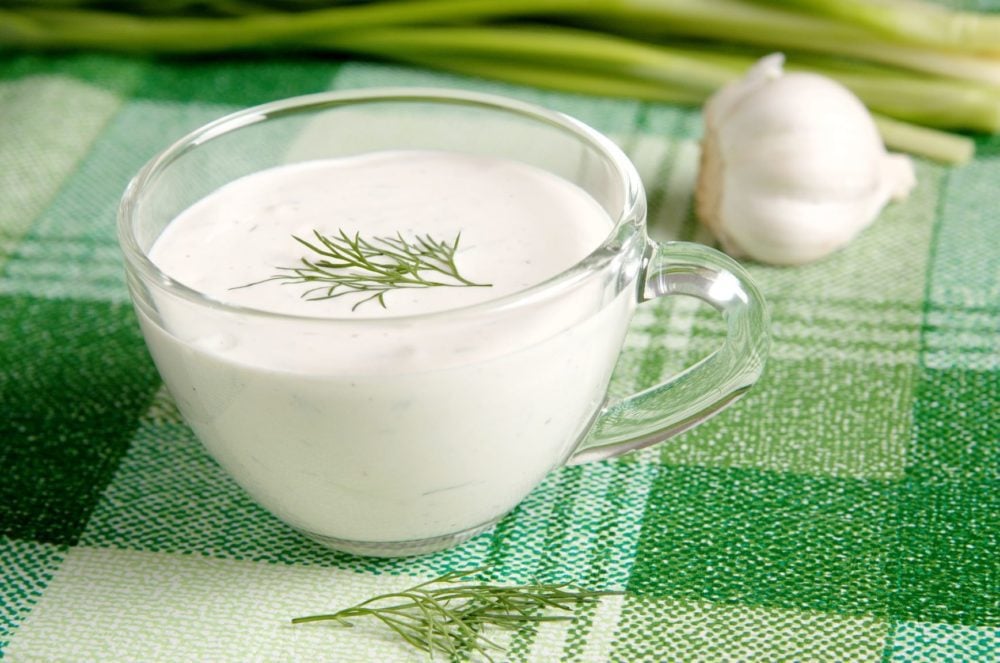 Sour cream is not only great for burritos and tacos, but it is also a fantastic ingredient when you’re baking sweet recipes such as cookies, cakes, scones, and biscuits.

However, what do you when a recipe requires sour cream, and you don’t have any to hand? Relax, we’ve got you covered.

Although sour cream is readily available at the store, there are many substitutes that may prove handy if you run out of this dairy product.

In this article, we explore the best substitutes for sour cream, so next time you find yourself without it you don’t have to scrap the recipe, but instead can alter it accordingly!

Check out our substitutes for sour cream below.

Cream is a great substitute for sour cream and is such a common ingredient that you’re bound to have some in the fridge.

Simply mix a tablespoon of lemon juice with a cup of heavy whipping cream, and your sour cream substitute is good to go!

Depending on your personal preference, you can also try blending:

What you’re left with is a silky substitute for sour cream that is perfect for your recipe!

Yogurt is a common household ingredient and has an excellent substitute for sour cream.

Yogurt is also packed full of protein, which is essential for a healthy, balanced diet and for maintaining muscle and bone development.

Plain or Greek yogurt can be used to substitute sour cream, in a ratio of 1:1. Simply place a cup of yogurt in a bowl and mix it with a tablespoon of vinegar or lemon juice to make it sour.

Buttermilk is an excellent alternative for sour cream, however, you may find that the consistency is thinner than sour cream. To rectify this, you can try also adding ⅓ of a cup of butter.

If you don’t have any buttermilk to hand, you can always make your own by adding lemon juice to regular whole milk.

For every cup of regular milk that you use, add around a tablespoon of something acidic, such as lemon juice or vinegar.

If you’re looking for an easy substitute for sour cream, milk or milk powder is a convenient alternative that couldn’t be easier to make!

Simply mix one cup of whole milk with a tablespoon of lemon juice, and you’ve got yourself an excellent replacement for sour cream.

If you don’t have milk, you can also use evaporated milk and it will work just as well.  To substitute a cup of sour cream, simply mix ⅔ cup milk powder in ¾ cup of water with a teaspoon of lemon juice or vinegar and blend!

Cottage cheese, also known as curds and whey, is another great substitute for sour cream. As a high protein, low-calorie food packed full of nutrients, cottage cheese can be used for a variety of recipes.

Its popularity has grown in the last few decades, and it is often recommended as part of a healthy diet.

Simply blend 1 cup of cottage cheese with ¼ cup of low-fat yogurt and a teaspoon of lemon juice, and you’re left with a delicious alternative to sour cream that is lower in calories!

If you’re on a diet or are just looking for a low-fat alternative to sour cream, this low-fat substitute is a great option to make and doesn’t sacrifice flavor.

For a low-fat alternative, you will need:

In a pan, combine the milk and buttermilk powder together. Place the gelatin in the pan and cook over a low heat until it dissolves.

Remove from the heat and add in the yogurt and stir. Spoon the mixture into a bowl and place in the refrigerator for up to an hour before you serve.

You can store this sour cream alternative in the refrigerator for up to 5 days. This is the perfect alternative to sour cream for health conscious individuals, as with this recipe you don’t have to be worried about the fat content!

Even if it’s not something you’d usually make, it’s a good recipe to have in your back pocket when you’re on a health kick!

If you’re lactose intolerant or simply require a vegan alternative to sour cream, an excellent substitute can be made out of cashews.

For cashew vegan sour cream, you will require:

If you have already soaked your cashews for the recommended time, simply drain and rinse them until the water runs clear.

Combine the cashews, water, lemon juice, vinegar, salt, and mustard in a blender. Blend until the mixture is smooth and creamy. If the consistency of the mixture is too thick, you can always continue adding more water as you go.

Just be sure that you add the water bit by bit until you are satisfied with the consistency, as you don’t want it to become too thin.

Season to taste and serve! Spoon the mixture into an airtight container and it will keep for up to 5 days in the refrigerator.

If you simply don’t like cashews or have a nut allergy, pureed tofu is a protein-rich food that can replace sour cream.

You can also use a similar recipe to achieve the same result that is packed full of protein!

For a tofu substitute for sour cream you will need:

Simply add all of the ingredients to a blender and blend until smooth.

Season to taste and add more lemon juice if it is required. Serve immediately, or prepare earlier and refrigerate in an airtight container until you’re ready to serve.

If you’ve recently switched to a plant-based diet, you might not know that plain soy yogurt is another great yogurt substitute for sour cream.

Studies show that soy products can lower cholesterol and decrease blood sugar levels, especially in people that struggle with health conditions such as diabetes.

Simply place a cup of yogurt in a bowl and mix it with a tablespoon of vinegar or lemon juice in order to make it sour.

If you’re without sour cream and a recipe you’re using calls for it, you can easily whip up a batch using heaving whipping cream.

All you will need for this recipe is:

Mix the cream and lemon juice together, then stir in the milk. Pour the mixture into a jar and screw a lid on tightly before shaking well.

Remove the lid and cover the jar with a clean piece of kitchen towel and secure it with a rubber band.

Leave the mixture overnight (up to 24 hours) for it to set up.

After 24 hours the mixture should be relatively firm. Give the mixture a stir and cover it with a jar lid. Keep it refrigerated, it can last for up to 2 weeks.

What is a healthy alternative to sour cream?

A healthy alternative to sour cream is plain or greek yogurt. Yogurt is known to have multiple health benefits associated with it, such as improving your bone health, boosting your metabolism, and improving gut health.

Alongside this, the combination of protein and texture of Greek yogurt can make you feel fuller for longer in comparison to other snacks, making it a great alternative for people trying to watch their weight or control their portion sizes.

Plain or greek yogurt can be used to substitute sour cream, in a ratio of 1:1.

All you will need for this recipe is:

Simply place a cup of yogurt in a bowl and mix it with a tablespoon of vinegar or lemon juice to make it sour. Voila - a healthy alternative to sour cream!

Can you substitute cream cheese for sour cream?

Sour cream is a popular and versatile product. It’s made from coagulating cream, meaning that you can absolutely substitute cream cheese for sour cream, especially for dips or other savory recipes.

However, that being said, the main difference is that cream cheese is thicker and the flavor of sour cream isn’t necessarily the best choice when it comes to making sweet desserts that call for cream cheese. This is because of its acidic taste, meaning that sour cream can not be used as a substitute for cream cheese frosting.

Yes, you can substitute cream cheese for sour cream. However, this will only achieve a similar result in savory recipes. When it comes to sweet recipes, such as cheesecakes and cream cheese frosting for cakes, it might be worth sticking to what the original recipe calls for.

What can I substitute for sour cream in muffins?

This can easily be altered if you’re following a plant-based diet. If you’ve recently switched to a plant-based or vegan diet, you might not know that plain soy yogurt is another great yogurt substitute that can be made to resemble sour cream.

Simply place a cup of yogurt in a bowl and mix it with a tablespoon of vinegar or lemon juice in order to make it sour.

Add it to your muffin recipe as you would sour cream and you’ll hardly be able to tell the difference. You’ll wonder why you haven’t tried yogurt in baking sooner!

There are multiple substitutes for sour cream!

Other options include coconut milk, plain yogurt, coconut cream, or dairy free sour cream. You may even want to take a whack at homemade sour cream. It will taste great on a baked potato and some people even use it in place of salad dressing.

Experiment and find your favorite! What have you got to lose?