Cream of chicken soup is convenient and easy to make within minutes. Simply crack open the can, heat it on the hob for a few minutes, and you’re ready to go.

But does it really taste that nice? For the added calories and fat you’re adding into your body, you’d think that it should taste amazing. 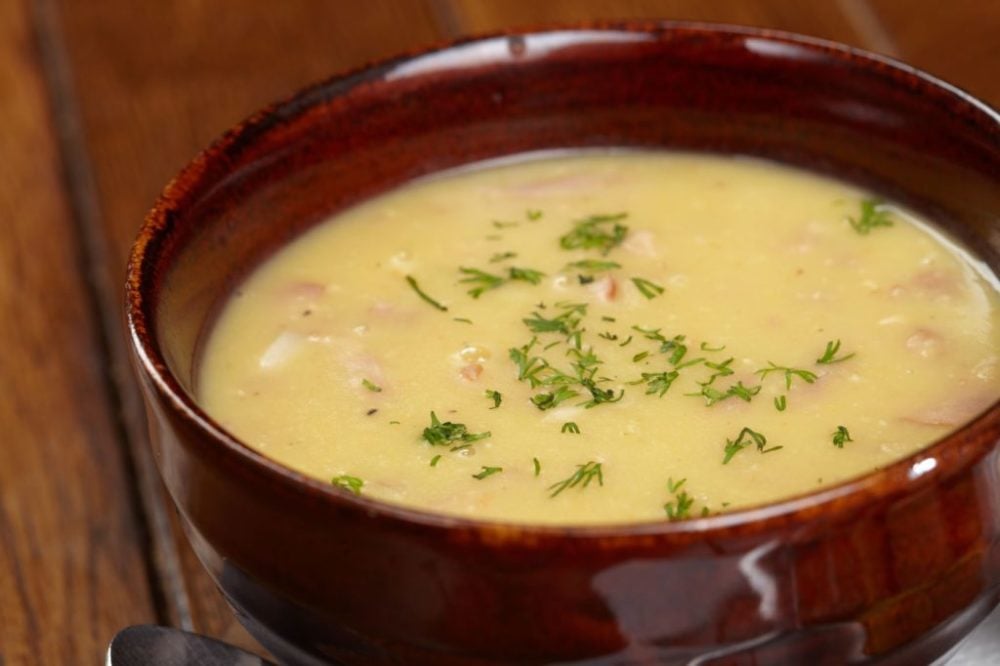 We’re going to find out below.

When debating whether to purchase a can of cream of chicken soup at the store or find a substitute, knowing that a homemade substitute is much healthier could sway your opinion.

For example, a can of Heinz cream of chicken soup has 208 calories, 20% of your daily value fat, 12% of which is saturated fat.

Similarly, each Campbell’s cream of chicken soup can have 325 calories, 30% of your daily value total fat, and 25% of your daily recommended saturated fat.

In terms of sodium, there is 2175 mg in each can which equates to around 96.25% of your recommended daily sodium intake.

With homemade soups, you can be the decider of what ingredients go into your body, rather than eating a processed food that has been loaded with fat and salt.

Below we have three substitutes for cream of chicken soup that you can use for a healthier substitute. Your body, mind, and waistband will thank you for it, trust us!

What’s more, you’ll likely have the majority of these ingredients somewhere in your pantry.

This method will make you the equivalent of one can of cream of chicken soup. You can split this into as many servings as you desire.

Melt the butter in a large sauce pan over a low heat to avoid burning. Once the butter is all melted, mix in the flour until it becomes smooth. The mixture should be lightly bubbling by now.

Carefully whisk in the chicken broth. Once all combined, slowing to introduce the milk to the pan. Bring the soup to a gentle simmer and wait for it to thicken to your desired consistency.

Remove the soup from the heat and serve immediately. Use salt and pepper to taste and enjoy!

How simple was that recipe? You can make your own homemade cream of chicken soup within no time at all with ingredients already found in your kitchen.

While there is more fat in this soup than the canned soups that we looked at above, the sodium amount is much lower.

In fact, if you were to consume the entire batch of soup you just made, you would only be consuming 34% of your daily average sodium intake. This is much less than over 100%!

Use this recipe anywhere when you need one 10.5 ounce can of cream of chicken soup.

Add any additional ingredients to spice up your soup to make it more nutritious with the help of vegetables or meat.

Melt the butter over a medium-high heat in a saucepan large enough to contain the soup.

Once bubbling and all melted, turn the heat down to medium and stir in the flour. Continuously stir until the flour is all mixed in and the base is thick.

Whisk the milk and chicken broth into the flour mixture, ensuring that it is all smooth and that there are no lumps of flour left.

Add the celery salt and onion powder and bring to the boil.

Cook for a further five minutes so that the soup can get nice and thick. Don’t worry if it’s not getting as thick as you’d like, as it will further thicken as it cools down.

Serve immediately or store in the refrigerator once cooled for a later meal.

We couldn’t find any nutritional information for this cream of chicken substitute, perhaps because you can alter how much fat and calories are in each serving.

By using low fat milk, you will have a thinner soup with considerably fewer calories and fat.

However, if you want a thick and creamy soup you’ll need to use a milk with a higher fat content. This will also increase the calorie count.

Either way you choose to make your soup, the sodium content is nowhere near as high as in a processed can of soup from the store.

Melt the butter in a saucepan over a medium heat and add the flour to create a paste.

Mix the milk and chicken broth together and slowly introduce to the paste.

Make sure all of the flour lumps are dissolved to create a smooth mixture.

Add the garlic and onion powder. Keep stirring until the soup gets thicker during the cooking process.

Remove from the heat and serve or use in another recipe.

You should use 1 ⅓ cup of this recipe to replace a 10.5 ounce can of cream of chicken soup. This recipe makes around two cans worth of soup, so you can store the other half away for a later date.

You can see from the nutritional information of this recipe that it is much healthier than canned cream of chicken soup. The calories are decreased as well as the total sodium.

What’s more, the amount of fat in the soup is much less than our other substitutes as well.

Don’t have these ingredients?

We’ve been talking about these substitutes as though you have all of these ingredients in your kitchen, but what if you don’t have a vital component?

If you don’t have cream of chicken soup already for your casserole or other recipe, you’re not going to want to go to the store for ingredients to make a substitute.

Alternatively, you might simply not want to make your own soup to put into your recipe. We’re all about an easier life, right?

Making your own soup increases the cleanup time, as well as the time taken to make the dish overall. This doesn’t appeal to everyone.

So, can you substitute cream of chicken soup for single ingredients that you might already have in your pantry? Or is it essential that you obtain a soup, either from the store or by making one?

Below are a number of single ingredients that you might have in your pantry, along with our advice whether you can use them for a cream of chicken soup substitute or not.

Unfortunately, your dish won’t have the same chicken flavor. However, you can add some chicken broth to the sour cream to mimic this if you desired.

Using chicken broth as a substitute could make your dish more watery than you want and ruin its consistency.

This might not be a dealbreaker to you, but if it is, you can quickly whip up one of the cream of chicken substitutes that we have mentioned above.

What can you use substituted cream of chicken soup for?

Cream of chicken soup can be used for many dishes, such as casseroles. A soup will make the casserole creamer and give it a lovely chicken taste that amplifies all of the other ingredients within.

Adding one of our substitutes to a chicken casserole can make it even more delicious and meaty than if you were to skip it. The creaminess would surely be missed in a casserole dish.

Alternatively, you could use a cream of chicken soup substitute to make a sauce for a chicken dish. Adding some more ingredients to this base such as mushroom, lemon, or herbs can transform it into a sauce to cook over your chicken.

Cream of chicken soup can also be used as a base for other soups. While making one of our substitutes, simply add in any other ingredient that you would like to enjoy and cook together.

Good examples are potatoes, mushrooms, or shredded pieces of chicken. You can use the substitutes as a base for any chicken dishes to give it a creamy consistency and a heightened chicken flavor.

What can I use instead of cream in soup?

There are a number of great ingredients that can be used instead of cream in soup if you’re all out or want a lower calorie alternative.

One of the best options is sour cream. This ingredient has pretty much the same consistency as cream and will work well with other ingredients.

Depending on what soup you’re cooking you can add other flavorings to effectively replicate the flavor. For example, if you’re making cream of chicken soup, try adding some chicken broth to the sour cream to mimic the flavor.

Make sure you don’t use too much broth though, otherwise the thickness will be off. You’ll need to find the right ratio of both sour cream and chicken broth to create the right consistency.

How do you make cream of chicken soup from scratch?

There are many tried and tested ways of making cream of chicken soup. Here’s a basic version that can be easily altered to suit you:

This is just a basic recipe, if you want to add more flavors and textures add in some cooked chicken pieces and vegetables such as leeks, carrots or celery and season with parsley.

Is cream of chicken and chicken broth the same?

What is cream of chicken soup made of?

Depending on the recipe, cream of chicken soup can be a super simple dish to make using only a few staple ingredients. At its most basic level, cream of chicken soup is generally made of milk, flour, butter, chicken stock and seasoned with salt and pepper to taste. Lots of people like to add in cooked chicken pieces for added flavor and texture as well as vegetables such as carrots, leeks, celery and parsley for a chunkier, more filling dish.It’s best to cook from scratch, although it is available canned. However, this version contains high levels of sodium and preservatives making it pretty unhealthy and not as tasty.

We hope that you’ve learned something valuable from our article about substitutions for cream of chicken soup.

Any method that you decide upon is going to be much healthier than using a can of store bought cream of chicken soup, with more than your entire daily allowance of sodium!

Remember that you are in control of what you put in your body with a homemade substitution. Want a lower calorie option? Use fat free milk! The possibilities are endless, so enjoy! 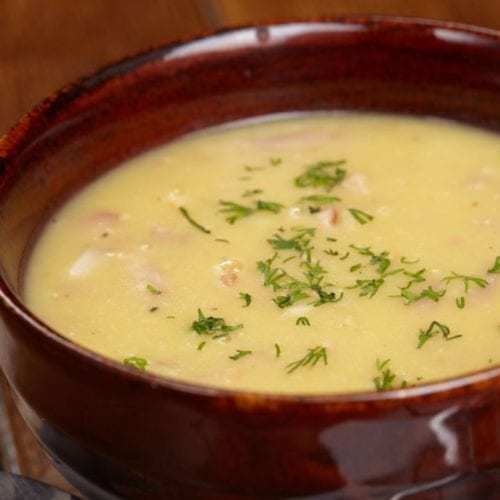 Our Best Substitute For Cream Of Chicken Soup

These options are sure to be a hit. So, gather your family and friends and enjoy. Let us know your thoughts!
5 from 6 votes
Print Recipe Pin Recipe
Total Time 4 mins
Course Seasoning, Soup, Substitute
Cuisine American
Servings 4
Calories 176 kcal

Calories: 176kcal
Keyword substitute for cream of chicken soup
Tried this recipe?Let us know how it was!