I don’t know about you but I’m hungry just writing this article! Neufchatel and cream cheese are both soft white cheeses but are quite different overall.

You have most likely seen cream cheese in countless recipes and most grocery stores. Neufchatel cheese may not be as well known but it is often found in similar packaging to cream cheese and in the same food section.

Over the years, many chefs and advertisements have put these two kinds of cheese in the same category, mainly because they are thought of as the same. Is this really the case though?

Cream cheese is perfect for cheesecakes (even hungrier now!) and frostings. It's very mild cheese taste is popular with many people with a slightly thicker consistency of butter. This texture can either make or break its popularity with many as it can be too dense and thick for some.

However, if you like mild cheeses or those with creamy textures, you’ll probably love cream cheese. Neufchatel cheese looks the same but the main difference between the two is their origins.

Although both are made from milk, one of them combines cream to create its unique texture and taste. To find out which one, keep reading!

We are going to look at these differences in more detail for you to finally tell these cheeses apart!

Neufchatel was first produced in Neufchâtel-en-Bray in Normandy around the 6th century. It is believed to be one of the oldest kinds of cheese in France.

You may have one man to thank for the modern-day Neufchatel cheese. In 1872, a New York dairyman by the name of William Lawrence produced the first American cream cheese. He did this by adding cream to the original recipe of Neufchatel.

This is the recipe that is still used in the commercial production of Neufchatel cheese today. Interestingly, Lawrence had to send his cheese products to Philadelphia to get packaged, with the brand becoming known as “Philadelphia Cream Cheese.”

It is unclear where cream cheese actually originated. Many believe William Lawrence invented it by adding cream to the Neufchatel recipe but there is evidence that cream cheese has been used in England since the mid-1500s. 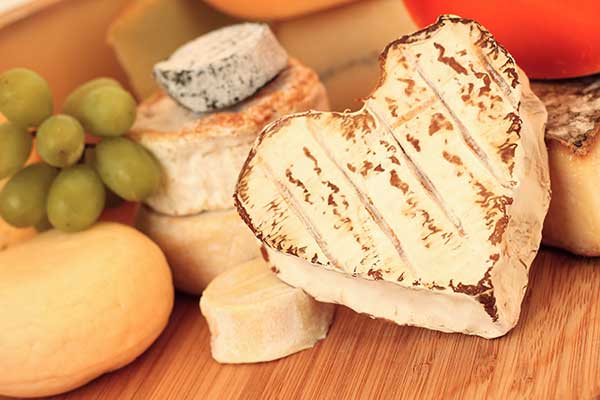 Originating in France during the sixth century, Neufchatel cheese is made from raw cow’s milk. It is wrapped in a dry edible rind with a spreadable, soft, white center.

After around 6 to 10 weeks of maturing, Neufchatel becomes rather salty. Its texture turns dry and firmer as it ripens more.

If you’re wondering what Neufchatel looks like, it is mostly found in the shape of hearts as well as log-shaped or in bars.

Although the original Neufchatel was made in France, modern production is based on its American version with pasteurized cow’s milk.

The American version is milder and softer in texture to the original but has much lower fat and calorie content. This is why it has become a popular healthy choice in various recipes.

It is also popular to use Neufchatel for dips, sauces, or as a bread spread to its soft, smooth texture. 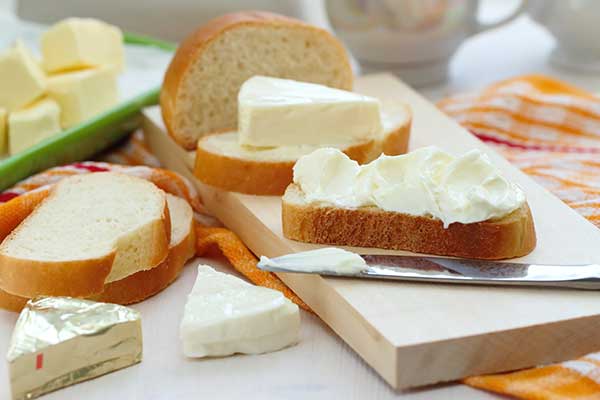 Cream cheese is another soft option for spreads. As with American Neufchatel, cream cheese is made from pasteurized milk but combined with cream.

The ingredients can vary with some homemade recipes including salt and vinegar or the use of stabilizing components such as Carrageenan used by some cream cheese manufacturers.

Cream cheese has a shorter shelf life due to not maturing naturally. It has to be eaten fresh otherwise it can go off and be inedible. You will find this cheese wrapped in foil in just about every grocery store.

Unlike Neufchatel, cream cheese is a little fattier containing around 33% of milk fat. Therefore, it should be consumed in moderation.

Nonetheless, it is still a highly popular ingredient for cheesecakes, dips, and toppings. It is perfect for making sauces thicker and its mild taste is ideal for cake frosting.

Neufchatel is much milder and softer than cream cheese. Many like to use Neufchatel as a substitute for cream cheese and this is perfectly fine in some cases.

However, American Neufchatel is not the best choice for cheesecakes as it is too soft and may not work so well.

Real Neufchatel is made from raw cow’s milk giving it a much more intense flavor than its American version. The level of mildness in cream cheese and American Neufchatel is similar as they are both made from pasteurized milk.

Although both mild, the tastes of these cheeses are pretty unique. Many believe Neufchatel has the taste and aroma of mushrooms with a nutty, yeasty flavor, similar to Camembert cheese.

If it is matured for more than ten weeks, Neufchatel’s taste can become much smoother yet stronger as time goes on.

Cream cheese has more of a sweet taste. It is typically flavored with certain herbs, garlic, different fruits, and black pepper.

Cream cheese is a fantastic option for sweet as well as savory dishes. Even at room temperature, it is pleasingly easy to spread over bread or cakes.

Whichever cheese you choose, both will be creamy and tasty. They will spread like soft butter on a piece of bread and go well with most cheese-related baking recipes. It's hard to go wrong with either cheese!

On the face of it, cream cheese has more fat content. That isn’t to say Neufchatel is fat-free though. If you’re looking for the main difference between the to, it would be their fat content.

As we touched upon, cream cheese contains at least 33% milkfat. We say “at least” because this is set out by the law as a minimum.

It must also contain no more than 55% moisture. Modern, American Neufchatel cheese has around 23% milk fat so is a healthier option. It also contains a little higher moisture content.

The main reason cream cheese has a larger fat content is down to its ingredients. It combines milk and cream creating its unique texture and a mild taste.

As Neufchatel is only made from milk, its fat content is far lower. Its lesser-fat content means Neufchatel is usually sold as a reduced-fat cheese option and is highly popular with those who wish to lose some weight.

Traditional Neufchatel cheese is normally heart-shaped and a perfect gift for Valentine’s Day if your partner loves cheese!

Even though these are seen as traditional shapes, they didn’t appear until hundreds of years after Neufchatelw was first made. Legend has it that farm girls shaped these cheeses for their lover during the 100 Year War against the English.

You may find it in the form of cylinders, or in brick and square shapes. To those who know French, unlike us, these shapes are called bond, Coeur, care, and briquettes.

It is far more likely to crumble than cream cheese, especially after maturing after 10 weeks. It is grainy but close textured with a smooth, velvet-like rind.

Cream cheese is firmed with lactic acid. To enhance its firmness, some producers add stabilizers such as guar gum. Without this, the cheese can often become crumbly and ruined.

You will find both kinds of cheese could pass as siblings but underneath their white, soft surface is an entirely different genetic makeup.

But despite the fact that they are not exactly the same, Neufchatel and cream cheese taste very similar to one another which is why they can often be substituted for one another.

How is Neufchatel different from cream cheese?

So while these cheeses are very similar to one another, they do have one major difference, and that is the fact that cream cheese has a higher fat content.

Can I replace cream cheese with Neufchatel cheese?

Both cream cheese and Neufchatel cheese taste pretty much the same as one another, so in terms of taste using both as a substitute will not impact the recipe. They also smell pretty much the same too, so the scent of both cheeses will not impact the recipe. But the best thing about both of these cheeses is that they have the same consistency as one another which is why they make the perfect substitute.

So, yes you can replace cream cheese with Neufchatel cheese. In fact, they make the perfect substitute for one another.

So there you go! Some cheesy knowledge to bring up if you ever lucky enough to find yourself at a wine and cheese tasting event.

If you are used to using cream cheese, why not give Neufchatel a try for a change and see if you can tell the difference.

As we said, both are great for most cheese recipes but if you really want to know the difference for yourself, head to the store, buy both kinds of cheese and eat away!