Cheese goes so well in so many dishes!

I for one love a grilled-cheese. Plus I love it in Italian pasta dishes like spaghetti bolognese and lasagna. Then there’s cauliflower cheese - great for getting one of your 5 veggies a day.

And the list goes on, there’s quiches, enchiladas, and of course, mac ‘n cheese.

But you usually need the cheese to be grated, and that requires having the proper equipment. And a chef’s knife just won’t cut it (pun intended)! 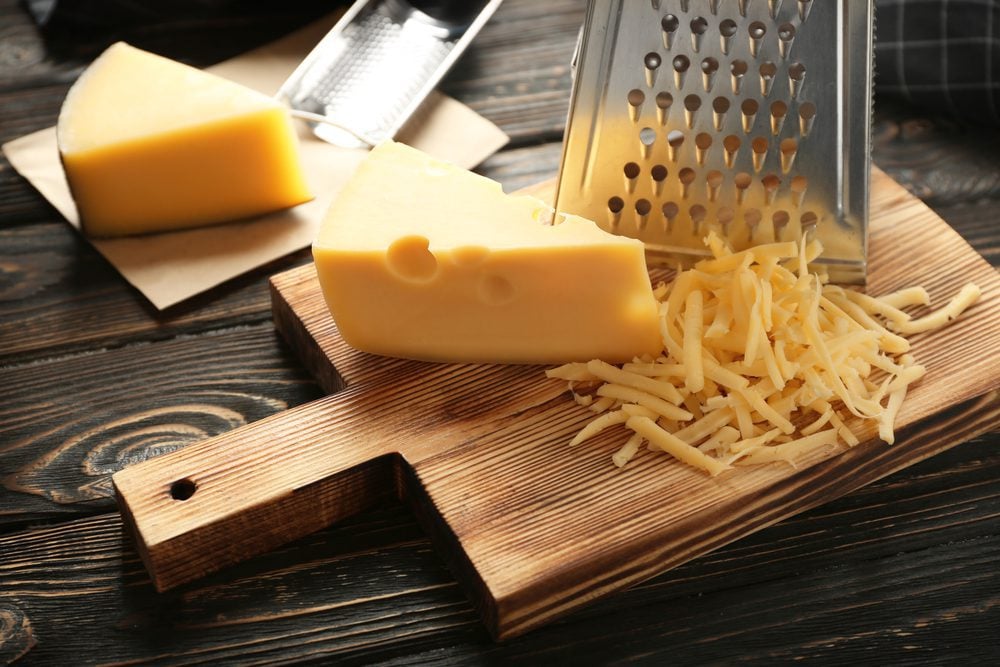 A cheese grater is a very affordable little device and is something that you’ll use again and again.

In this article, we’re going to show you our 5 favorite handheld cheese graters out on the market today. But we’ll be first to admit, it took a lot of deliberation to make our shortlist.

There are several different types of cheese graters out there. But we prefer traditional handheld cheese graters because they take up less space in the cutlery drawer than box graters or rotary graters.

Our reviews on these are coming up very shortly. Then we’re going to provide you with a handy buying guide, before topping that off a section where we tackle some of your most frequently asked questions on the subject.

So, without further ado... 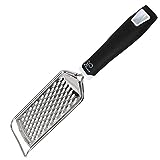 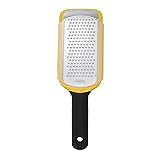 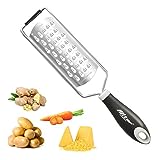 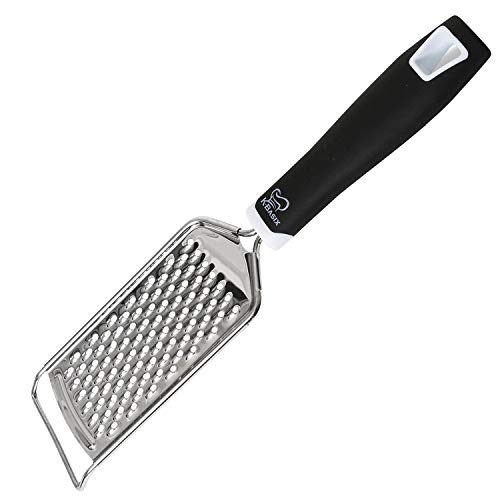 This particular cheese grater has been flying off the shelves, attracting well over 1000 customer ratings on sites like Amazon. And customer feedback has been very positive, it earned 4 and a half stars out of 5.

It’s a heavy-duty piece of kit and features sturdy, durable, and rust-proof real stainless steel, along with razor-sharp blades. It makes your cheese grating completely effortless. Even if you’re using hard cheese.

Of course, you can use it for much more than just cheese, and you can work your way through the gamut of fresh vegetables. Or maybe a little lime and coconut - whatever tickles your taste buds.

The exact size of the holes is 2mm, which we would argue is quite fine, and not quite medium size.

It has a very ergonomic design, with a smart rubber grip handle that features a handle hole, so you can hang the gadget up if you’re struggling for room in your cutlery drawer. And it won’t bend at all during use.

It’s super easy to clean by hand, but better yet it’s also dishwasher safe too. So handy.

We also love that the price includes a free eBook full of delicious Italian recipes.

And it comes backed up by a 100% money-back guarantee - very reassuring. You have nothing to lose, and a great cheese grater to gain.

This review is for the regular version of this cheese grater, but on the same Amazon product page, you will also find a hand grater for coarse cheese, which is available at a very similar and affordable price. Why not get one of each? 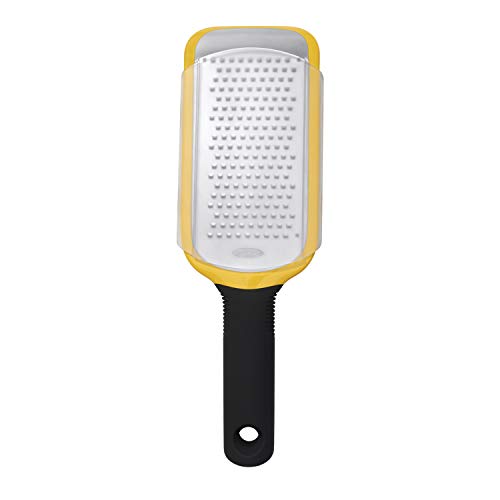 The customer feedback on this beauty blew our minds. It’s not very often that a product of any sort gets a 5-star rating on Amazon - especially after so many individual ratings. No wonder it's such a bestseller with the retailers.

This is an etched grater rather than a stamped one, which is something we discuss in more detail in our buying guide later on. The paddle is made of rust-proof stainless steel.

It has what it describes as medium holes, but we would describe them as fairly fine. It’s great for shredding hard cheeses, root vegetables, chocolate, and coconut, or for zesting your favorite fruits.

It has a non-slip foot and a comfortable non-slip handle. Plus it’s also easy to clean, and better yet, is also entirely dishwasher safe.

Please note this review is for Oxo’s medium grater, and not for the other 5 graters on the Amazon product page. 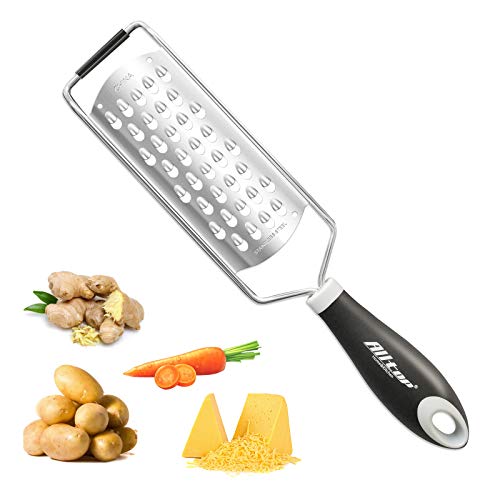 This is our favorite extra coarse cheese grater. And it’s not just us who are impressed with it. It’s a best seller with online retailers, and three-quarters of the people who bought it through Amazon rated it at 5 stars out of 5.

This grater is made with premium quality stainless steel and is built to handle both hard and soft cheeses. And with its large holes, you can make your way through a large block of cheddar cheese in no time at all.

The stand-out feature of this particular cheese grater is its slightly arched grating surface, which really helps those 36 razor-sharp cutting blades get stuck into the cheese, or whatever else you want to great. You know you can even grate onions with this beauty - very handy.

The grating surface is held in place with a very durable frame and has a non-slip silicone foot and a comfortable rubber handle. The handle features a little hole, should you want to hang the grater up out of the way. And there’s a protective cover included in the box too.

Cleaning it is a doddle, all you have to do is drop it into the dishwasher before it goes on. For the product dimensions, please refer to the product page.

Please note this review is for the extra coarse grater and not the fine grater which is on the same Amazon product page.

2 in 1 Zester Grater from Allwin-Houseware 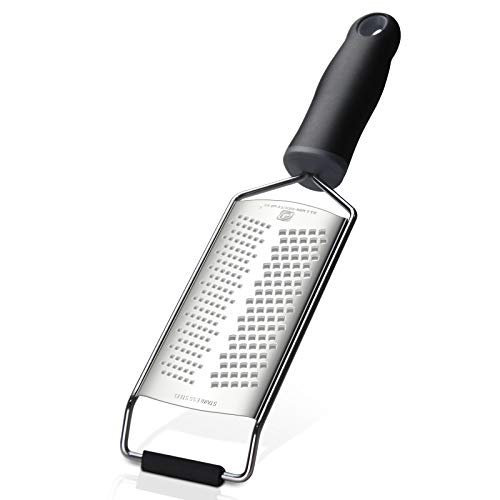 Here’s another best-selling cheese grater, and one with good feedback too, earning an Amazon rating of 4 and a half stars by customers.

What we love about this grater is that you’re basically getting the functionality of 2 different graters for the price of just one. This is because the grating surface has large holes on one side, and has finer holes on the other side. So much more versatile and handy than a regular cheese grater.

The grating surface is made of top-quality rust and corrosion-resistant stainless steel. And the blades are razor-sharp, making light work of all your cheese grating. And it can of course also grate a great many other foods too.

It also features a non-slip, ergonomic handle that’s very comfortable to hold. And there’s a hole in the handle, so you can hang the grater up out of the way when not in use.

And there’s also a non-slip foot opposite the handle, so you don’t need to worry about the grater slipping out of position as you grate, and it will instead remain perfectly steady.

You can either hand wash it, or if you have one, you can put it in the dishwasher for an even better clean. Then when clean and dry you can pack the grater away in the included protective cover. 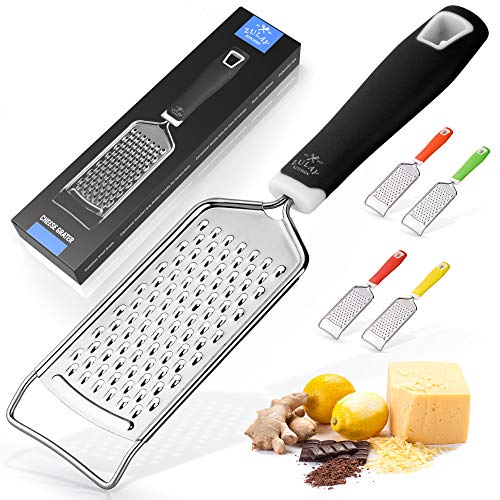 This cheese grater comes highly recommended with a 4 and a half star rating on Amazon, even after hundreds of individual customer ratings. And it made their bestseller list too.

It’s made with durable rust-proof premium-grade stainless steel. The blades are razor-sharp and make easy, effortless work of your cheese grating.

And you can use it for a range of different cheeses, including cheddar, Monterrey Jack, and mozzarella, and even parmesan.

The grating surface is nice and wide and is positioned on a durable long-lasting frame, inclusive of a sturdy support foot and built-in hanging hole. All very convenient.

The holes are a little small in size, which means that it may take some time to shred through a big block of cheddar, but on the other hand, this means you can also use it for foods that require finer grating. Perhaps for making desiccated coconut for example.

It has an ergonomic design with a soft thermoplastic rubber handle that offers a secure and non-slip grip. Customers scored it at 4.6 out of 5 on being easy to hold and use.

And it’s easy to clean too, whether you wash by hand, or whether you have the luxury of a dishwasher.

It’s available in two different color options, including classic black, or a bright orange, that you won’t fail to spot in your cutlery drawer.

We were also impressed to learn that it comes with a lifetime guarantee, no less.

As promised, here’s your buying guide!

This refers to the production process of your cheese grater. With a stamped grater, the blades are simply stamped into position. With etched graters, on the other hand, these are made via a chemical process.

Some people prefer etched graters because the food grated is generally thinner. However, etched blades are more likely to cause injury if you catch your finger.

Size of the Holes

The size of the grater’s holes determines what food items can be shredded, and how finely they are grated.

Pinholes are rough and raspy, designed to create a powder-like finish. They’re great for sprinkling nutmeg or chocolate into your deserts. Or for adding grated citrus zest or ginger to a dish.

Small holes are great for shredding parmesan, or other hard cheeses

Medium holes as the name suggests, lie somewhere between large and small holes, and as such create smaller shavings than what you get with large holes. The sort of size shavings that would go well for preparing hash browns.

Large holes are great for quickly shredding hard and soft cheeses alike. And they can also be used to shred vegetables too, like zucchinis and carrots for instance.

Should I get a handheld cheese grater?

Hand-held cheese graters couldn’t be easier or more intuitive to use. They’re a great way of getting your kids involved in preparing family meals, teaching them important life skills, without them having to handle any sharp knives.

And they require no maintenance, and super easy to look after. All the cheese graters in our shortlist of top 5 picks are entirely dishwasher safe.

What is the best way to shred cheese?

The best way to shred cheese depends entirely on what cheese you are using and what effect you wish to achieve.

For example, if you want a thick layer of cheddar cheese baked on a large family meal, then using a grater with large holes is best.

If however, you want less cheese on your dish, perhaps because you are using a very strong tasting cheese, then a cheese grater with smaller, finer holes, might better suit your needs.