Here at The Kitchen Community, we think every cheese is worthy of its own in-depth guide. Asiago cheese is no different. That delicious, versatile yellow block is wonderful when it’s fresh in a sub or sandwiches.

It's our favorite Italian cheese along with Romano cheese (pecorino Romano being my husband's favorite) and parmesan cheese.

The hardened, mature cheese is the perfect accompaniment to soups, salads, and bread. We all know how tasty it is, but how much else do you know about this delicious cheese? 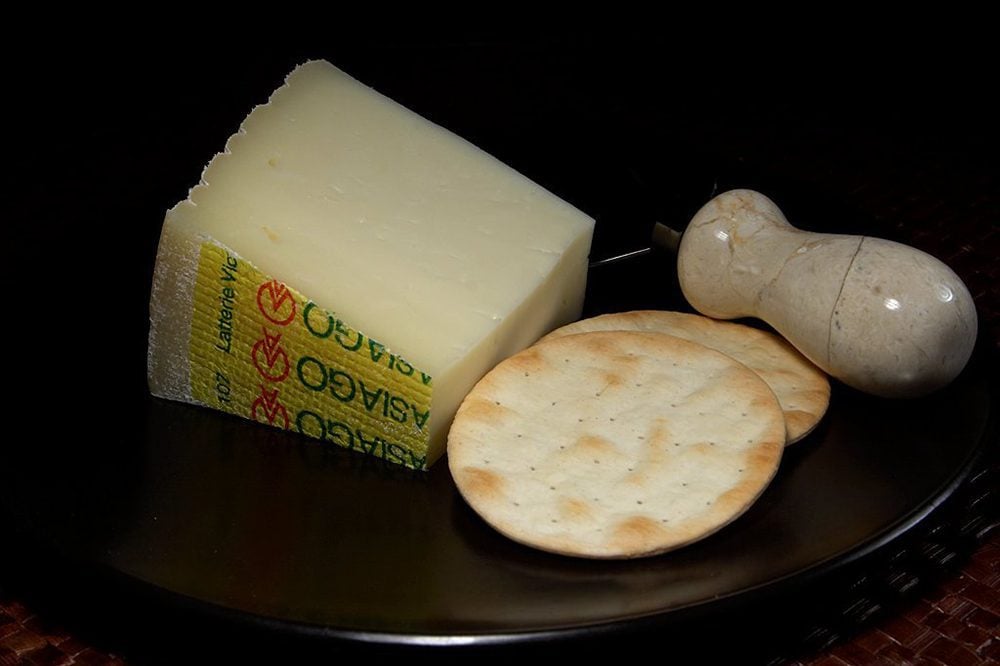 We are going to be exploring Asiago cheese in this article, telling you all of the important information you need to know about it.

We dare you to get to the end of this article without ordering a cheese pizza….

What is Asiago cheese?

The delicious cheese known as Asiago is an Italian hard cheese. It is made from whole cow’s milk. The process of making it involves cooking the cheese curds to give it a much denser texture.

It can be eaten fresh after it is made or it can be left to mature in an aging process. It has the title of Italian DOP which stands for Denominazione di Origine Protetta.

What this means is that Asiago is only considered to be a genuine Asiago if it is made in its area of origin, in this case in the Asiago Plateau in the regions of Veneto and Trentino.

The texture of this cheese can range from medium to hard, depending on how long it has been matured. The taste of the cheese also differs depending on the aging process. The older the cheese the more strong and bitter it becomes.

When it is fresh, Asiago cheese is either white or pale yellow with a thin rind. It looks similar to brie, although not as soft. The texture is more comparable to a sponge cake.

The flavor of fresh Asiago is sweet and buttery, with a sour note. Asiago that has been left to age is much more yellow in color, ranging from pale to amber yellow.

The texture is much harder when it has aged, resulting in a more firm and compact cheese. The flavor, as we have said, is more bitter with undertones of nut and yeast.

There are different types of Asiago cheese, and we will be taking a closer look at these later. First, we should explore a little more about the history of the cheese.

Asiago cheese is a direct relative of the very first cheese products from the Asiago plateau in the 10th to the 15th century. Here there was a lot of agricultural activity, including the raising of sheep to make savory cheeses.

These cheeses were known originally as Pegorin. The reason the Asiago area was so prominent in the sheep singing was because of its pastures. This meant that they also produced a lot of the wool needed for textile works in the nearby valleys.

Eventually, sheep raising was becoming less popular as farmers and other agricultural workers were focusing more on cattle, like cows, instead.

When the 19th century began, cows were more popular than sheep in this region, and the modernization of breeding techniques made it more accessible to get milk from cows rather than sheep.

This meant that the 19th-century saw a complete replacement in the milk available, with bovine milk becoming widespread. Something that coincided with this was the modernization of cheese making techniques.

Whilst it still remained traditional in the farms in the Asiago plateau, cheesemaking spread to other parts of Italy, especially the surrounding areas of the plateau.

The neighboring communities, including some lowland areas and the region of Trentino, began to make cheese from cow’s milk, too.

When the wars began, both the Napoleonic wars and the two World Wars, Italians from this region would trade their cheeses with the Austrian Empire, as this is the country they bordered.

This led to the cheeses becoming known beyond Italy, and they have remained popular ever since. Of course, it is only in more recent years that Italian cheeses have spread all around the world.

It is likely that following World War Two, the wealth that many countries found themselves in possession of led to the widespread transportation of foods from other countries.

What we do know is that today, Italian cheeses make up some of the most well-loved cheeses on offer here in the States, and in Britain, too.

Soon after the cheeses started gaining more popularity, the Italian communities where Asiago originated decided that they should form an association.

The Consorzio Tutela Formaggio Asiago was formed in 1979. They are based in Vicenza and they create guidelines that must be followed in order to create a true, guaranteed quality Asiago cheese.

They have put in place seals and markings to be used on their Asiago cheese to ensure that people know when they are buying the genuine thing.

This also prohibits other cheesemakers from elsewhere in the world from claiming that their cheese is an original Asiago.

The association represents around forty different cheesemakers, and each of these cheesemakers must follow the guidelines exactly in order for their cheese to gain the stamp of approval and be allowed to use the Denominazione di Origine Protetta title.

The different types of Asiago Cheese

As we mentioned at the beginning of the article, there are different types of Asiago cheeses.

Depending on whether they are fresh, and for how long they have matured, you can get some very different tasting Asiago cheese.

In this section, we are going to explore the aging process of the cheese in a little more detail and tell you about the three main types of Asiago cheese that vary slightly depending on their classification.

To elaborate a little more on what we discussed earlier, the aging process of cheese varies depending on what outcome you want from it.

When it comes to Asiago cheese, the aging process varies from ‘fresh’ to a few months old. At each stage, it is likely to look and taste different.

We wrote a little about fresh cheese earlier on in the article, stating that it typically looks white. In terms of flavor, it is relatively mild and quite sweet tasting. The texture is smoother than aged cheese, and often it can have some holes in the rind.

When the Asiago cheese is aged, it is usually done for a maximum of 6 to 9 months. At 6 months old the cheese looks very different from when it was fresh. It is more crumbly and becomes a light yellow color.

The flavor is tangy and pungent. If the Asiago cheese is aged for 9 months then you can expect the texture to be very firm. It is at this age that it is more comparable to hard cheeses like Parmesan.

The flavor is a wonderful blend of spicy, sharp, and fruity. It can also taste yeast-like. The cheese can also be matured for even longer, but we will be coming to this soon!

These different stages of aging can be classified into different types of Asiago cheese. There are two main types: Pressed Asiago (this is also known as Asiago Pressato in Italian). The second type is Asiago d’Allevo. This latter type can be classified again depending on its maturity. Read about each of them below.

This type of Asiago is a fresh one. It is prepared from cow’s milk. To make it the cow’s milk is heated and then rennet is added to it for it to form a curd.

Rennet is the name given to curdled milk taken from the stomach of an unweaned calf.

This curd is then handled very delicately and pressed into a cheesecloth. It is left to be aged for around 40 days. This does not sound ‘fresh’, we know, but compared to the 18 month aging process of some cheeses, this cheese is just a newborn!

After the 40 days are up the cheese ‘dough’ can then be given its final form as a soft white colored cheese with a smooth, elastic crust.

The second type of asiago cheese is the Asiago d’Allevo. This cheese is made from a blend of both skimmed and whole cow’s milk.

The texture is far more crumbly because it is left for a much longer period of time. It can be left from anywhere between 3 and 18 months. Because of this, there are different classifications of this type of Asiago.

As you can see, this delicious cheese has a very colorful history. We absolutely adore this calcium-rich cheese and eat it with a variety of things.

We love it with bread, grated over a salad, and even crumbled into a soup.

How do you eat yours?