Bun bo Hue is a traditional Vietnamese dish and a type of noodle soup known for its spicy broth and complex flavors. The first time I tried it, it was like tasting heaven, and I immediately wanted more. The dish originated in Hue, a city in Central Vietnam, also the former capital of Vietnam.

Like pho, bun bo Hue takes the traditional flavor game a step further. However, it is less popular than pho among Americans. Bun bo Hue is known for its many distinctive components, the first of which is the use of pork bones and blood, and the second of which is the use of herbs. However, if you can’t find this dish served anywhere nearby, what options do you have? Knowing that I couldn’t eat out every night, I set out to find a way to replicate this delicious food in my own kitchen.

To that end, I did a lot of reading and experimentation to come up with a solid bun bo Hue recipe, and now you can prepare this hearty noodle soup at home with our guidance.

What is Bun Bo Hue?

Bun bo Hue is a spicy Vietnamese beef and pork noodle soup from the village of Hue. It consists of thick noodles in a spicy hot broth, topped with beef slices, pork, and herbs. Traditional bun bo Hue broth is very spicy; this is its signature taste profile.

You can make the bun bo Hue broth with a combination of many types of bones. I’ve tried pork feet, oxtail, pork knuckles, beef shank, pork knuckles, and a bunch of lemon grass, all of which were incredible. Slowly simmer all these ingredients in a pot to get the signature broth.

Bun bo Hue originates from the city of Hue in Vietnam. The name translates literally to “beef noodle soup from Hue.” Hue is famous for churning out other Vietnam favorites like banh ham and banh bot loc, both of which I strongly recommend.

The former Vietnam capital is also known for its fiery dishes with enhanced flavors. Even though bun bo Hue is traditionally eaten for breakfast in Hue, I find that I can eat it at any time of the day and still like it. Additionally, when you travel north and south, bun bo Hue takes on a variety of forms, but the original version stands out and cannot be mistaken for anything.

The sides are an assortment of fresh vegetables like Vietnamese basil, fish mint, banana blossoms, and lettuce. It may also come with  a dipping sauce containing a bowl of fish sauce with fresh chili slices for a distinctive kick.

Authentic bun bo Hue has a characteristic saltiness from the shrimp paste and sweetness from baby shrimps.

Although pho is better known in the United States, bun bo Hue is quickly gaining momentum. Both dishes are similar, but they also bear some striking differences.

When compared to pho, the spice level of bun bo Hue is much higher. In addition, chicken and beef are the most popular meats used in making pho, and are typically served with complementary cuts of the same animal. However, pork and beef are both staples in traditional bun bo Hue, and both are cooked in the same broth. Another distinction is in the broth, which in pho is flavored with star anise, burnt onion, and ginger, among other things. Bun Bo Hue is flavored with aromatics including shallots, sate chiles, annatto seeds, and lemongrass.

Preparing the bun bo Hue broth is a detailed and time-consuming process that is rewarding. In my recipe, beef bone and lemongrass form the base of the broth, while annatto seed oil imparts color and sate chili oil adds spice.

The broth-making process is a sophisticated one involving stewing the beef and pork bones. My broth is incomplete without the use of lemongrass, chile oil, and fermented shrimp paste.

To keep the broth clear, you must occasionally skim the bubbles from the boil. This process maintains the broth clarity and helps retain a sweet but spicy taste. Fish sauce, which has a distinct umami flavor, is another of my go-to additions to the broth.

This spicy noodle dish has a chili paste that pairs perfectly with it. The chili oil or sate is the star of bun bo Hue. It is characteristically spicy, garlicky, and filled with lemongrass flavor.

I make my sate using dried Thai chile, chili powder/flakes, lemongrass, garlic, shallots, and a bit of sugar. The sugar and shallots balance out the heat from the chili. In order to make a rich and savory paste, you need to rehydrate the chili in water, shred the other flavorings, and put everything in a skillet over medium heat till it becomes thick.

I also add some fish sauce to the mix to heighten the flavors. Instead of fish oil, you can use shrimp paste. Shrimp paste locally made in Hue has a bright pink color and strong umami flavors.

After the broth has been prepared, serve with a spoonful or two, depending on taste. To give diners more control over the spiciness, I typically serve the paste in a small bowl.

The Toppings and Add-Ons

Congealed pork blood: Authentic bun bo Hue does not skip the congealed pork blood. It has a texture like silk tofu; it is chewy and does not fall apart when bitten. You can thicken the blood by leaving it to sit in a container. Afterward, boil it with salt to solidify. You can find ready-made ones at your local Asian supermarket. All you have to do is heat it up.

Banana blossoms: Banana flowers are another common addition I make to bun bo Hue. Banana flowers can be quite difficult to find and prepare, so skip them if you cannot find banana blossoms. Many restaurants typically substitute banana flowers with thinly sliced red cabbage. However, to prepare, I remove the little fronds and petals and soak them in lemon water to prevent browning.

Fresh vegetables: What is a Vietnamese dish without herbs? I use Thai basil, fish mint, red onions, bean sprouts, and lime wedges for our recipe.

Cha lua: Cha lua is a Vietnamese ham you can use as a topping for bun bo Hue. It is a steamed pork sausage that you can slice thinly to garnish your dish. Alternatively, beef tenderloin and sliced beef shank are also excellent garnishes.

Bun bo Hue is a dish best known for its spicy, salty, and sweet combination. The plate is also packed with lemongrass, giving it a unique taste. The various components of the dish offer these characteristic flavors.

Bun bo Hue is similar to pho, but their flavor profiles differ. The former is well-known for being spicy, while the latter isn’t. Also, the predominant flavor of bun bo Hue is lemongrass, which is absent from pho.

Typically, you can eat bun bo Hue with chopsticks and a soup broth spoon. Bun bo Hue may come with a serving of side vegetables. Scoop the vegetables and dunk them in the broth. Firstly, this cools down the broth.

Secondly, it helps to cut through the chili of the broth. Add your chili paste here and an optional dash of fresh lemon juice.

Bun bo Hue originates from the city of Hue in Central Vietnam. Hue was the capital of Vietnam during the Nguyen dynasty. It is the home of vermicelli noodles, and Hue is famous for its spicy noodle dishes. 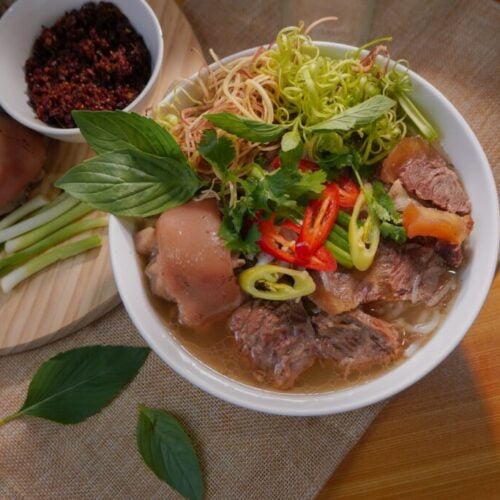 Bun bo Hue is a beloved dish from Hue in Central Vietnam. Many people love and consume this spicy Vietnamese noodle soup. Although it is less popular than pho, it is making its way up the top. And with our simple guide, you can now enjoy this delicacy at home.

Nowadays, however, many prepare the dish using simpler alternatives they can easily find in their local stores. Banana blossoms are expensive and require expertise, so many substitute them with red cabbage.

Bun bo Hue has a distinct taste of saltiness, sweetness, and spiciness. The flavor profile of this Vietnamese dish is deep and well-rounded. It’s no wonder bun bo Hue has started gaining popularity in America.