Bun rieu is a Vietnamese noodle soup that’s like no other. This soup is prepared with shrimp, tomatoes, meat broth, tofu, vegetables, and many other herbs and spices. Its major component is tofu, but what makes it truly unique are the rieu, which are meatballs made of pork, shrimp, prawns, or crab.

With all these rich flavors in a bowl, bun rieu is definitely something you’ll crave daily. Most especially on colder evenings!

Just like you, at some point, I got tired of ordering bun rieu from random restaurants and getting disappointed. Hence, we went and did the research ourselves and found an easy yet delicious bun rieu recipe that hits just the right spot!

Here’s what to expect while making bun rieu with us.

There are a few different ways to prepare bun rieu. Some of these are straightforward, while others need more effort. However, as someone with only a moderate amount of experience in the kitchen, I’d say that making bun rieu is easy and simple. That is, provided that you are aware of the ingredients you need.

If you go to Vietnamese restaurants as often as I do, you’ve definitely noticed that this dish is almost always on the menu. It’s literally that easy to put together! As a result, it is safe to say that whoever developed the Vietnamese crab noodle soup known as bun rieu created it for convenience. As if someone wanted to prepare soup with the ingredients they had and, in the process, made a masterpiece in the kitchen.

If, on the other hand, you are interested in trying something a little bit different, you can look at a slightly altered version of the recipe that we have provided below.

Rieu was created with freshly pounded small crabs, but in this recipe, we’ll be making this with other ingredients. After all, in this day and age, only some enjoy such a resource. Not to mention that pounding crab is extremely time-consuming, laborious, and requires the expertise of a trained professional!

As a result, in this recipe, we will replace it with a can of chopped prawns or crabs and fresh crab meat – an alternative that is less expensive, easier to find, and with flavor that’s just as good.

The broth is a standout component of the Bun Rieu Vietnamese crab noodle soup. Depending on the flavor you’re going for, you can add canned chicken or pork broth. It doesn’t really make a difference which broth you use because they both pack tons of meaty goodness!

You should have no trouble finding canned broths at any of your neighborhood grocery stores. However, if you have the time, you can prepare your own broth by boiling pork bones. To say that homemade broth tastes better than canned pork or chicken broth would be too bold of a statement for me to make. Either way, you are in for a fun time no matter what path you pick.

In my perspective, Bun Rieu already has a lot of flavor because of all its ingredients combined. So, I prefer it with less amount of meat in the broth. However, meat fans can feel free to put as much shredded meat as they like in the broth. To each their own!

You’ll love the fermented shrimp paste addition if you have a knack for funky flavor. Its strong flavor and aroma add a kick to your Bun Rieu, which I absolutely love. Many people shy away from its strength but don’t worry. We can always tone down the aroma later on!

Shrimp paste is one of the ingredients that you save for later in the process. This way, you can opt in or out of adding more, depending on your preference. In other words, if your bun rieu lacks intense flavor, you can add shrimp paste. If not, then you can keep it as it is.

Pro Tip: Mix in shrimp paste into the entire broth instead of your bowl as you eat. This minimizes the intense aroma of the paste but adds more richness!

We also use a lot of other sauces and pastes in the bun rieu recipe, like fish sauce, crab paste, and so on!

This might not make sense initially, but trust me when I say it works like MAGIC. I like to believe that putting ketchup on your bun rieu is a cheat code or something like that. I mean, it’s not only a simple way to add spice to your soup, but it also gives you that nice, vibrant red color you are looking for.

In addition, you won’t have to go out and buy a whole bottle of vinegar and tomato paste when all you need is a tablespoon or two of each of those.

But if it still tastes a bit too odd, you can try doing it the other way. Squeeze in a few lime wedges to your bowl, together with some tomato paste and annatto seeds, for some color.

This bowl of Vietnamese noodle soup, like any other Vietnamese dish, is incomplete without a variety of greens.

There are two herbs that are absolutely necessary for the preparation of your soup. The first is Vietnamese balm, also known as Kinh Gioi. The second is Tia to, also known as perilla or shiso. The latter is, however, optional!

As for the vegetables, water spinach is going to be the main ingredient. In most cases, you have to add it raw. You also need to cut the water spinach stems with a Dao Che Rau Muong in order to make the leaves softer and chewable. In English, this device is called a water spinach splitter.

This vegetable is only available at certain times of the year. As a result, there may be times when it is either extremely costly or entirely unavailable.

The bun rieu crab noodle soup has a broth that is acidic, somewhat sweet, and a little sour all at the same time. It gets its intense flavor from shrimp paste, fish sauce, crab paste, and fresh herbs, among other things.

‘Bún’ means ‘noodles’ while ‘Riêu’ refers to the soup’s crab cakes made of pounded mini crabs (alternatively, crab paste) and eggs. It kind of resembles sea foam when added to the soup!

Yes! Bun rieu is gluten-free, and so is this recipe we prepared for you. 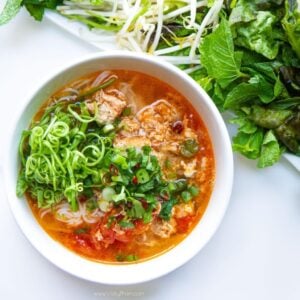 At this point, it's time to learn how to cook bun rieu! You can follow through while reading or print the recipe out for next time.
5 from 8 votes
Print Recipe Pin Recipe
Prep Time 30 mins
Cook Time 1 hr 30 mins
Total Time 2 hrs
Course Main Course
Cuisine Vietnamese
Servings 5 bowls
Calories 880 kcal

For the Rieu or Crab Cakes

Calories: 880kcalCarbohydrates: 119g
Keyword bun rieu, vietnamese crab pork and tomato soup
Tried this recipe?Let us know how it was!

Enjoying classic bun rieu no longer requires finding a good restaurant, and you can easily have it at home. Even if you don’t have fresh crab or the expertise to prepare it, you can still prepare a bowl of delicious bun rieu using canned alternatives. Canned crab paste, prawn, or crab mixture is generally available at grocery stores at affordable prices.

For more assistance or suggestions, you can comment below!