Have you ever been in a position where you’re trying to get your fried chicken on but you haven’t got the time or calorie balance to afford it? We definitely have.

While some people love the flavor and juiciness of chicken thighs, the chicken breast holds a special place in our hearts for lots of good reasons. The chicken breast is the most popular part of the chicken largely because it’s one of the healthiest chicken parts. It’s low in fat and calories, and absolutely delicious.

Another thing people love about chicken breasts is that they cook very quickly. Dark chicken meat takes longer to cook, so if you’re looking for a meat that’s quick and easy to cook, go with the chicken breast. This versatile cut can be cooked whole or chopped.

Pan-searing chicken is a great way to cook your chicken quickly and healthily without giving up too much of the oft-omitted moisture. We’ll show you how to get perfect chicken every time.

My family is a big fan of pan seared chicken breasts. It’s in their favorite chicken breast recipe. Juicy chicken cooked in a cast iron skillet makes the whole house smell great, particularly when I start making the pan sauce.

How to easily make a Pan Seared Chicken Breast

A lot of the flavor of pan-seared chicken comes from the crust that forms when the chicken meets a hot pan; the sear. You’re essentially trying to compact as much flavor into the surface of your chicken as possible.

You won’t have enough time to get the breast to absorb any seasoning so using a thinner breast or flattening your skinless breasts is imperative.

Reducing the thickness of your chicken breast also increases the overall surface area which increases the amount of flour you can dredge it in to create the beautiful crust you’re attempting to achieve. In almost any seared dish a thinner cut will cook faster and therefore lose less of that quintessential moisture.

Chicken breasts in general are extremely easy to come across. With over 80% of chicken consumed in the US every year being white breast meat, it is widely the most accessible source of meat available.

For a dredge, we’re going to be using an all purpose unbleached flour that is also widely available and we’d be shocked if you didn’t have some in your pantry already.

You can use any other flour that you’d like especially if you have a restrictive diet but plain flour is great at absorbing juices and creating a pseudo roux-based crust. Coconut flour is a great alternative for all you gluten free chicken lovers out there.

You can use cornflour if you want to achieve a more crispy and light coating but you’ll need to use a bit more oil and the sear won’t be so deep or crunchy.

How to prepare your chicken breast for searing

If you purchased pre-flattened breasts then skip this step but if you’ve got thicker or organic breasts then you’ll need to pound them down.

To do so we aren’t just going ham with a meat tenderizer, what you’ll want to do is grab some saran wrap and sandwich the breast between 2 layers. Then grab a heavy flat bottomed frying pan and lightly but evenly start to flatten the breast down to about an inch at its thickest.

Next, pat the breasts down with some kitchen towel to remove any excess water on the surface. Using your fingers or a pair of tongs dredge the breast in the flour mixture by either coating it in the flour and patting it into the breast or put both components into a plastic bag and jostle around ensuring total coverage.

Once completely coated, set it aside and it’s time to head to the stove.

As we’ve said this method of searing chicken relies on putting a crust on the chicken breast instead of actually searing or blackening the surface of the chicken. We’ve done it this way to retain as much moisture as possible without sacrificing that beautiful seared flavor.

The coating is light and seasoned well enough that you will still be able to taste the chicken, that’s the major difference between a dredge/coating and a breading.

Breading utilizes a wet and dry combo to make the coating its own component of the dish, we’re just trying to accentuate the taste of the chicken.

Searing should take a very short amount of time as we’re cooking with high direct heat. This is why you’ll need to pay close attention to the chicken during the whole cooking process, this isn’t a dish that you can put on the stove and leave to cook.

Which Pan should you use?

As we said a heavy bottomed flat frying pan will work perfectly but for the best sear, you’ll want a stainless steel skillet. A cast iron skillet can also be used but it takes much longer to heat up evenly.

Breast meat also doesn’t hold enough fat or moisture to not become dry from the high heat of a cast iron skillet.

Anything that holds heat well will work perfectly for this dish so even if you only have a heavy bottomed crockpot, don’t worry it’ll work, you may just have to increase the initial heating time. 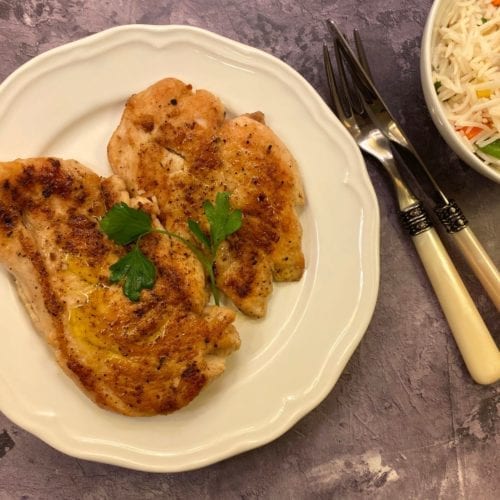 Pro tip: don’t discard the juices that accumulate at the bottom of the skillet, the added butter mixed with any flour creates a pseudo roux which tastes amazing with rice or pasta.