Parsley and Cilantro are both popular herbs used for flavoring and garnishing a wide range of cuisines.

They also come from the same family: the Apiaceae or Umbelliferae family, which consists mostly of aromatic flowering plants.

This plant family is named after the type genus Apium and is commonly known as the celery, carrot, or parsley family, or 'umbellifers'. This group is the 16th-largest family of flowering plants, containing more than 3,700 species in 434 general.

However, while these herbs may look similar, their tastes are quite different.

In this article, we’ll be exploring the little things that set these two herbs apart, including their flavor, uses, health benefits, and the dishes they’re most suited to. 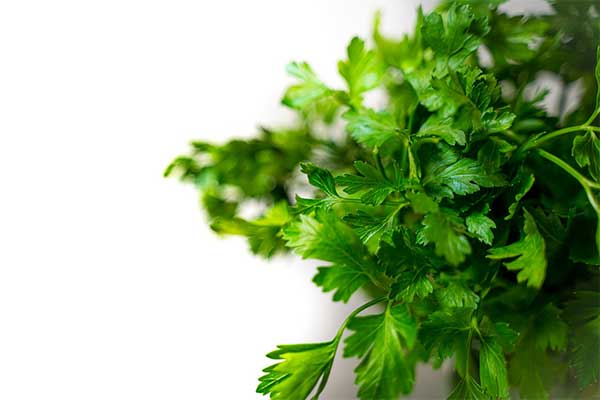 Parsley or garden parsley is known formally as Petroselinum crispum and is native to the central and eastern Mediterranean region.

It is thought to originally come from Sardinia and was cultivated around the 3rd century BC.

However, since this time it has naturalized elsewhere in Europe and is today widely cultivated as both a herb and a vegetable. It is widely used in European, Middle Eastern, and American cuisine.

There are different types of parsley; curly leaf parsley is often used as a garnish - freshly chopped and sprinkled on top of dishes across Europe as well as Western Asia.

Flat-leaf parsley is used similarly, plus it’s easier to cultivate and has a slightly stronger flavor.

Root parsley is commonly used as a vegetable in many soups, stews, and casseroles and features in southern European cuisines. 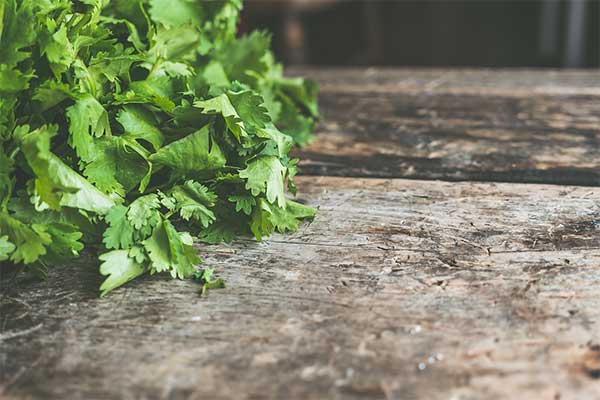 Cilantro is also known as coriander, which is the name that is used in countries such as the UK, and it is also sometimes known as Chinese Parsley - another reason why it's easy to confuse these two herbs!

Cilantro refers to the vegetative stage of the plant, whereas the dried seeds are derived from later stages of the plant, known as Coriandrum Sativum, which is where the term 'coriander' comes from.

Cilantro has a bright, lemony taste to it which is quite strong, and for some people, it can be pretty controversial.

For around a quarter of those surveyed, cilantro tastes like dish soap, and this perceived taste comes from a gene that detects specific aldehydes - and these are also used in many soaps and detergents, explaining why some experience a slightly chemical, soapy taste when eating Cilantro!

Parsley is characterized by its thicker, curlier leaves which are small and pointed. However, this is curly leaf parsley, and it differs from the flat-leaved variety, which looks very similar to cilantro due to its flat leaves.

However, parsley does differ slightly from cilantro in its brighter, green-yellow color and more pointed serrations of the leaves.

Cilantro is a flat-leaf herb with a three-lobed structure in its leaves. The tips of the leaves have a saw-toothed appearance which are not quite as pointed as flat-leaved parsley and tend to be more rounded. It is also a deeper green color than parsley, often described as 'emerald green.'

This is the easiest way to tell these two herbs apart, as their tastes are quite distinctive even though they are often used to garnish similar dishes.

Parsley has a fresh, grassy smell, and the flat-leaved version is supposedly stronger, with a pepper-like taste. Curly parsley is used more for decorative purposes and has a milder, relatively bland taste.

Cilantro is known for its “love it or hate it” taste. It has a more pungent, stronger taste than parsley and that slightly soapy smell from its aldehyde chemicals.

Like we said, not everyone is a fan of cilantro, and parsley is generally more palatable, though cilantro can add a zesty finish to a meal.

Curly Parsley is popular as a garnish as it has a distinctive, ruffled texture and appearance, whereas flat-leaved parsley is stronger and is used for specific recipes.

Flat-leaf parsley is also known as 'Italian parsley' and heavily features in pasta recipes, as it is known to mitigate the creaminess of the sauces. However, it’s not just an Italian thing: flat-leafed parsley is used in a myriad of cuisines and dishes.

It’s found all over Europe, the Middle East, and North America, and is regularly used in sauces, soups, stews, salads, and egg recipes.

Cilantro features heavily in Mexican, Indian, and Middle Eastern recipes, and is usually favored for its strong flavor and aromatic smell which makes it perfect for guacamole, salsa, and chutneys, as well as pho (Vietnamese noodle soup), soups, curries, and more.

It has a distinctively fresh, emerald-green color which also makes it a popular choice for garnishing as well as flavoring meals.

These herbs do more than just make your food look pretty.

Parsley is enriched with beta carotene and vitamin C which can help protect us against harmful free radicals in the water-soluble areas of our body, and they also keep our immune system working in optimal condition.

It’s rich in B vitamins which can help prevent cardiovascular diseases, and also contains myristicin (a volatile oil) which reduces the formation of cancer-causing tumors.

For this reason, parsley is often used as a ‘chemoprotective’ food, as it protects the healthy tissues of the body from anti-cancer drugs.

It can also reduce the risk of kidney and gall-bladder related issues, as it contains a high percentage of oxalates which help protect against these.

It has analgesic, antiseptic properties, and can be used as a natural stimulant and digestive aid.

It’s also rich in minerals such as calcium, which is essential for maintaining strong bones and teeth, as well as potassium which keeps blood pressure and heart rate steady.

Cilantro also has a strong metal detoxifier that helps free our body from heavy metals associated with problems such as heart problems, lung disease, stress-related illnesses, and cancer.

You might also be glad to know that cilantro contains very few calories and no cholesterol, so you needn’t hold back when it comes to sprinkling this flavorsome herb on your meals.

Differences between parsley and cilantro

Similarities between parsley and cilantro

Can you substitute cilantro for parsley?

Cilantro and parsley are two herbs that are used all over the world to flavor and garnish dishes, from the Middle East to India to cultures across Europe.

These two herbs come from the same family - the Apiaceae or Umbelliferae family - named after the type genus Apium and commonly known as the celery, carrot, or parsley family, or 'umbellifers'.

However, while they look similar, cilantro and parsley have quite different tastes, so you may wonder whether you can substitute one with the other.

Cilantro is characterized by its strong flavor and bright, lemony taste. It’s a controversial herb, as to around a quarter of people, cilantro tastes like dish soap due to a gene that detects specific aldehydes in Cilantro - which are also used in many soaps and detergents, explaining why some experience a slightly chemical, soapy taste when eating it!

Parsley on the other hand has a fresh, grassy smell. It comes in several varieties, and the flat-leaved version is supposedly stronger, with a pepper-like taste. Curly parsley is blander and is used more for decorative purposes.

You can certainly substitute cilantro for parsley, in fact, while these two herbs do differ in their flavor, they are great replacements for one another as they come from the same family, so they’re not worlds apart in taste. They also look extremely similar, which is great if you’re using cilantro or parsley simply for garnishing purposes.

Which is better parsley or cilantro?

Parsley and cilantro each have their own unique benefits and so which one comes out on top is more a matter of taste. Given that a certain proportion of the population has an aversion to cilantro, parsley has a less divisive taste.

Fresh cilantro is higher in calcium and dietary fiber than parsley is, and it is also moderately rich in Vitamin C and folate (folic acid), so both of these herbs offer significant nutritious value as well as add flavor to your dish.

Is Cilantro a coriander or parsley?

Cilantro is the same as coriander, which is why the herb is generally referred to as ‘coriander’ in countries such as the UK, and ‘cilantro’ in the U.S. and others. ‘Cilantro’ refers to the vegetative stage of the plant, whereas the dried seeds - Coriandrum Sativum - are derived from later stages of the plant, which is where the term ‘coriander’ stems from.

Parsley is a separate herb, but it’s part of the same family as cilantro - the Apiaceae or Umbelliferae family - which is why the two herbs are pretty similar in their appearance. Flat-leaf parsley looks especially similar to cilantro as both have flat, green leaves.

Do parsley and coriander taste the same?

While these two herbs look similar, they definitely taste different.

Cilantro has a bright, citrusy taste which can taste soapy to some people, whereas parsley has a slightly grassy, peppery taste.

The strong, zesty flavor of cilantro and the aromatic smell makes it perfect for guacamole, salsa, and chutneys, as well as the Vietnamese dish pho, and various soups, curries, and more.

Parsley and Cilantro stem from the same plant family and are suspiciously similar in their appearance. However, don’t be fooled: these herbs offer quite different tastes, and each has a distinctive flavor.

Cilantro certainly has a stronger taste though, which is why it can be pretty divisive among the population.

While flat-leaved parsley is used across Europe and features heavily in pasta recipes, the curly variety is used mainly as a garnish, and root parsley is a common ingredient in soups, stews, and other dishes.

Cilantro features heavily in Latin American, Indian, and Middle Eastern cuisine, where it is used both as a garnish and an ingredient.

Both of these herbs offer a myriad of health benefits - so they not only make your food look and taste better, but they make you feel good, too.

We hope that this article has helped distinguish the differences between parsley and cilantro, as the little things can make a big difference. Cilantro vs parsley is an interesting debate if you're looking for a fresh herb. I love to use coriander seed and cilantro leaves as well. Flat leaf parsley and coriander leaf are also interesting choices. I do need to cook more with dried parsley and dried cilantro.