Green chili peppers are an ideal way to add a kick to any meal and can be used in a variety of cuisines to give certain recipes a new lease of life.

Green chilies can also help with weight loss by burning unnecessary body fat. And it can naturally boost a body’s iron levels, especially useful for those suffering from low hemoglobin. The spice element of green chilies contains vitamin C, which is vital in introducing iron into the body.

However, green chili peppers are not only tasty but also have a handful of health benefits that makes them extra desirable to eat (in our eyes anyway).

Green peppers have a medium to hot spice level and are one of the most common ingredients found in Indian cuisine due to their smoky flavor.

However, if you’re not a fan of the spice of green peppers, or maybe you don’t have any in your home or your local grocery store, what do you use instead? 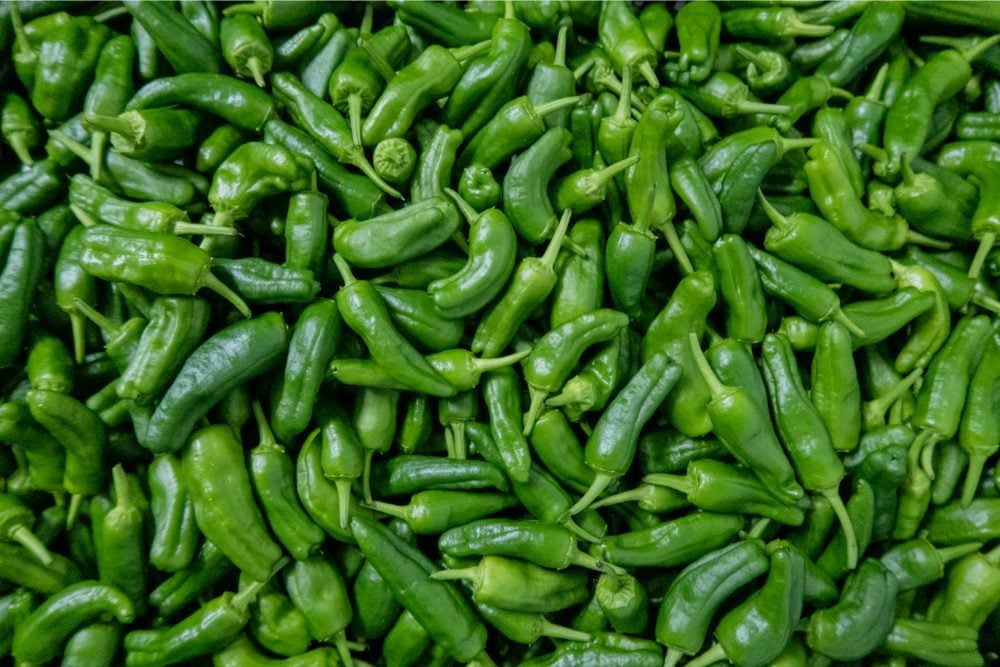 Luckily, there are a solid handful of substitutes you could use in place of green chilis, some of which are hotter whilst some of milder, so depending on what type of flavoring or spice you’re trying to achieve then you’ll be able to find something that will recreate the same sort of taste as green chilis.

We’ll be taking you through the 10 best substitutes for green chilies so you’ll always be able to make a recipe regardless if you don’t have that ingredient in your home. 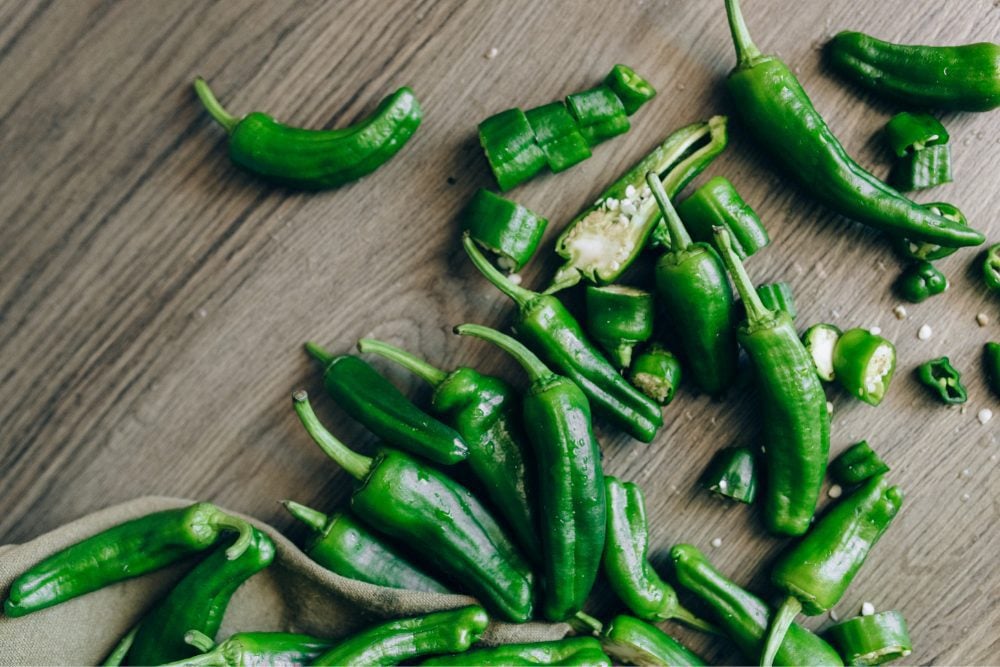 If the spiciness of green chilis just doesn’t cut it for you in a recipe, then you can always use jalapeno peppers as a substitute instead, measuring around 5 out of 10 on the heat scale.

Jalapeno peppers are often used as a spicy seasoning added to a recipe rather than being one of the main ingredients due to its heat level which can easily alter the flavoring.

Green chilis are normally roasted or fried off before cooking whilst jalapeno peppers normally best when they’re used fresh in uncooked recipes but they’re still delicious when cooked.

Jalapeno peppers are easily found at most grocery stores and can be kept fresh in the refrigerator for up to 2 weeks. 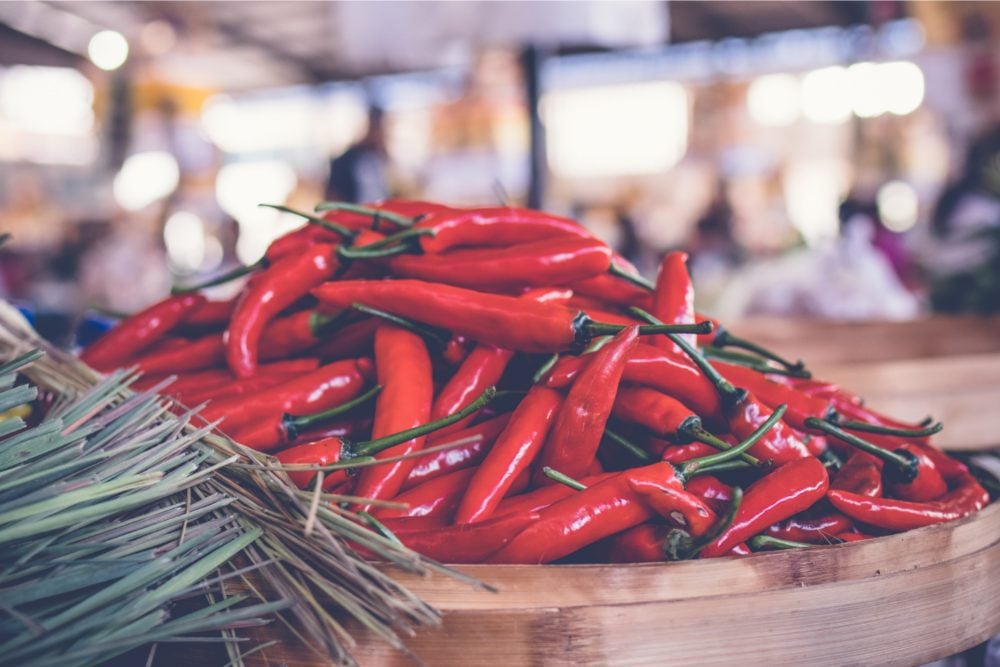 If you love spicy food and you’re after something that will blow your dinner guest’s socks off then you’ll want to add in a few diced cayenne peppers to any recipe you’ll be cooking. They work great as a spicier alternative to green chilies.

If you’re trying to replicate the same sort of spice level and flavoring of green chilies but by using cayenne peppers, then we’d recommend using only a small amount in your recipes as a little goes a long way but you’ll still get a good spicy kick.

These peppers are normally used dried or in powder form but you can still use them fresh in recipes as well.

As cayenne peppers are so spicy, they raise your body temperature and will make you burn more calories and boost your metabolism slightly, so if you’re looking for an excuse to add some real spice to your meals then this is it. 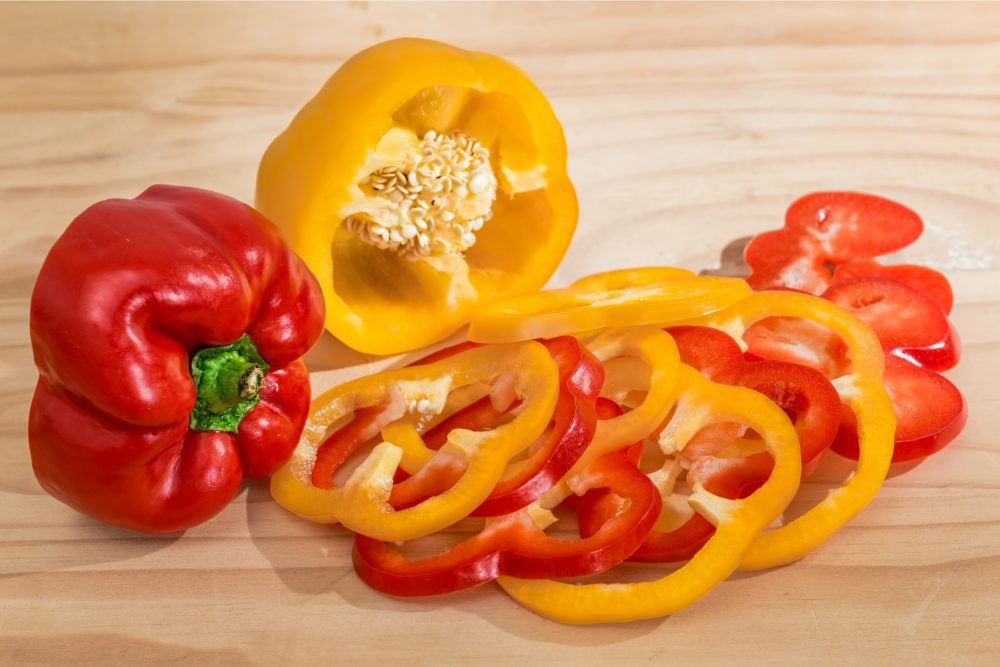 If you’re on the complete other end of the spice spectrum and you’re sensitive to any sort of spice, then you can try using some sweet bell peppers in your recipe. They won’t bring any sort of heat to the dish but they’ll have the same texture as green chilies.

Bell peppers are great to use in a recipe to add color as once they’ve matured you can get them in green, orange, yellow, and red forms.

If you’re going to use bell peppers but you’re worried that the flavoring will be too bland then you can add some ground black pepper to the recipe to replicate some of the spice of green chili. 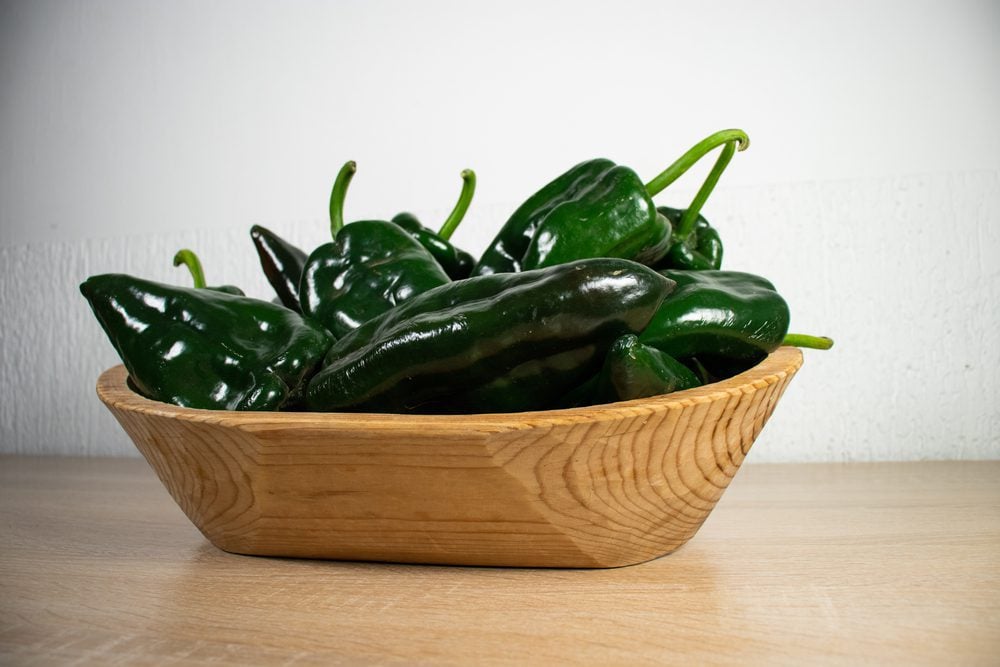 If you’re looking to achieve the same smokey flavoring as green chilis but with an extra bit of heat, then poblano peppers will be a good alternative for you to use instead.

They’re ideal for adding in small amounts to bring heat to a dish but they can also be used as the main ingredient for recipes like stuffed chili con carne peppers.

Poblano peppers are very popular in Mexican cuisine and they’re mostly picked when they’re green for cooking purposes but when these peppers have matured turn dark red and even black.

Many people choose to roast and peel poblano peppers to remove the waxy texture. 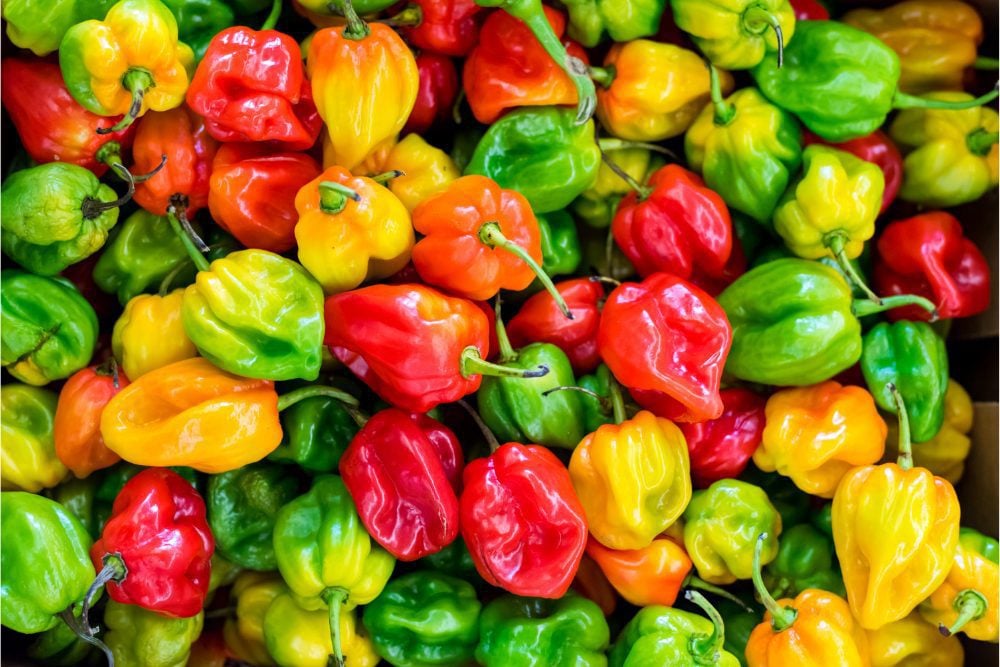 For spice lovers, green chilis are just not a common ingredient you’d keep around in your cupboards for cooking as they don’t reach the heat levels that other peppers do.

If you happen to have habanero peppers around, then you can use these as an extremely spicy substitute for green chilies.

These peppers are often used as an ingredient to make spicy sauces to put on the side of food or even in sauces to cook food in for those who are a little braver.

They bring a great heat and floral aroma to recipes and will only need to be added in small amounts to even achieve just a little kick of heat. 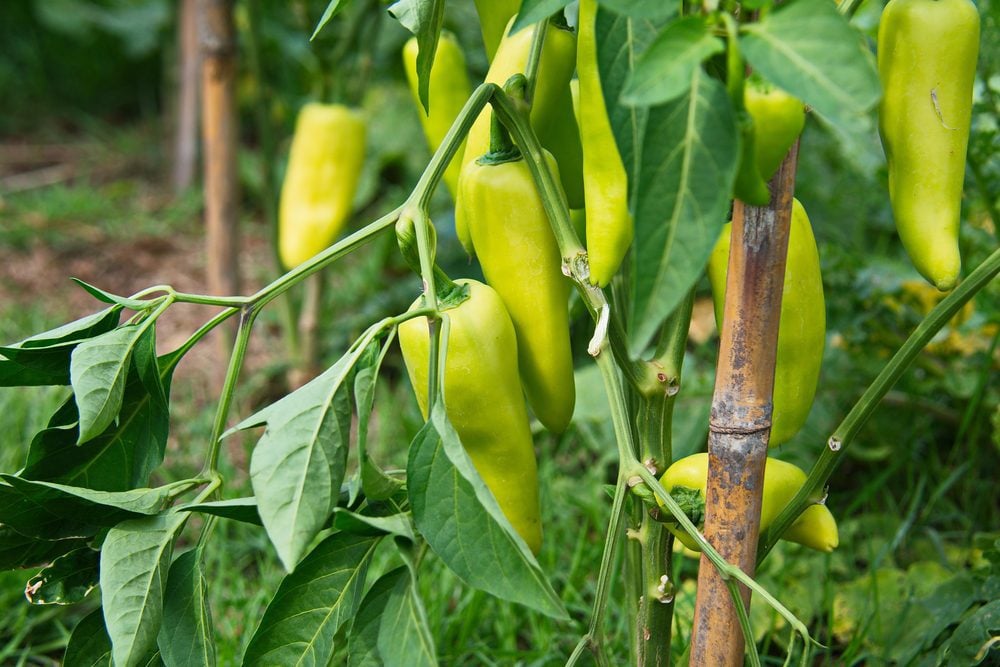 Banana peppers are one of the best substitutes for green chilis even though they are slightly sweeter and offer less spicy than green chilis do.

If you’re someone who doesn’t appreciate the hotness of green chilis, then you’ll prefer the milder spice that is subtle yet still recognizable in dishes whether that be salsa or even some enchiladas.

Banana peppers normally have a yellow color to them but they are known for turning red or orange as they begin to ripen. They’re often used alongside hotter pepper alternatives to bring sweetness to a recipe without being too overpowering.

A very popular way to use or cook with banana peppers is to pickle them with garlic and white vinegar in a jar to be used in salads.

Due to the mild sweet taste, people often stuffed banana peppers with other ingredients as a healthier alternative to a taco. 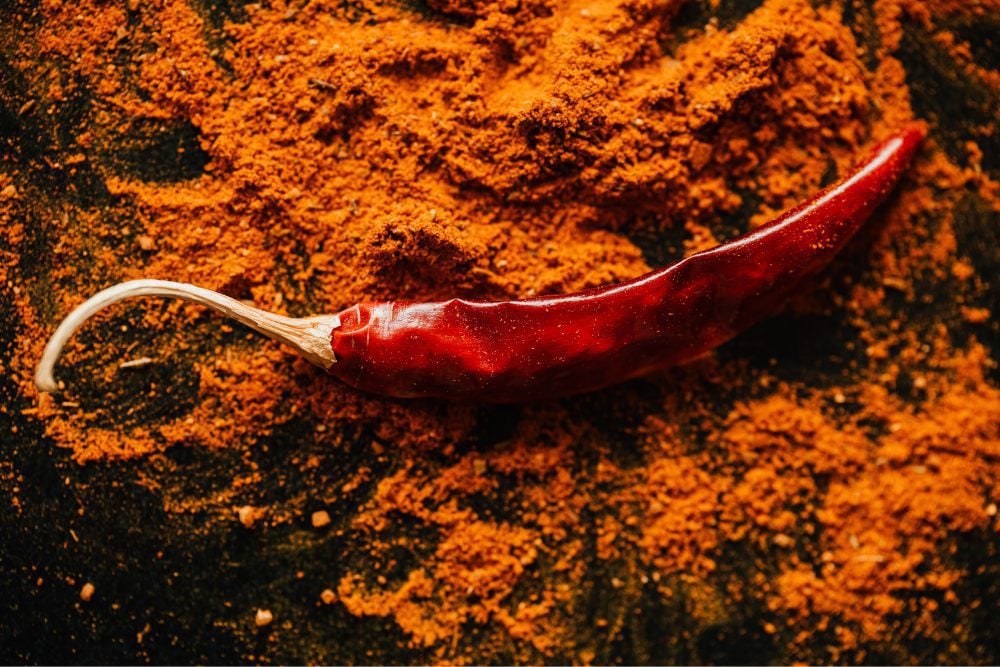 We know what it’s like at the end of the week when your refrigerator is looking bare and you’re struggling to find the ingredients to make up a recipe.

If you don’t happen to have fresh peppers at home, then you can always go to your pantry and grab some chili powder or dried chili flakes as an alternative to fresh green chilis.

These should be staple condiments that you keep in your home as they’ll last up to 2 years once they’ve been opened so they can be used again and again.

Chili powder and chili flakes can bring a lot of heat to a recipe, so you’ll want to measure how much you use depending on your ability to handle the spiciness.

These condiments can be easily found in the seasoning section of the grocery store and are some of our go-to ingredients to add heat to a recipe without using fresh ingredients. 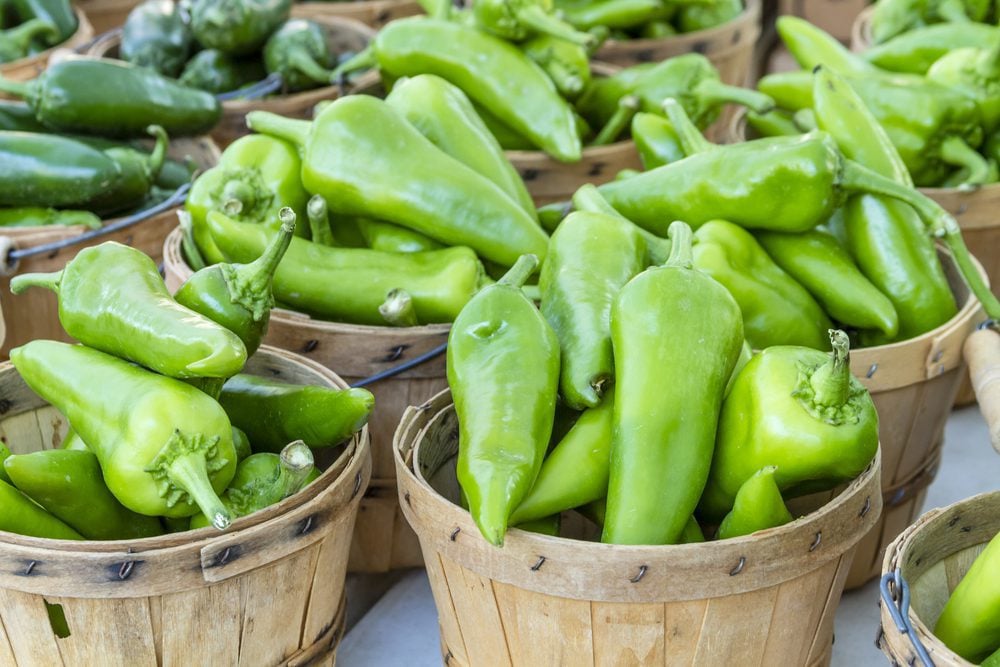 Looking for a substitute that’s still mild in flavor and still around the low to medium heat range? Then Anaheim peppers would be an ideal substitute.

You may know Anaheim peppers by other names such as California peppers, New Mexico peppers, or even Magdalena. They have a similar appearance to green chilis and can be used in fresh recipes or cooked dishes.

These peppers are mild enough to be eaten as a main ingredient or can be used to add a slight hint of spice to a recipe for those who are more sensitive to heat. 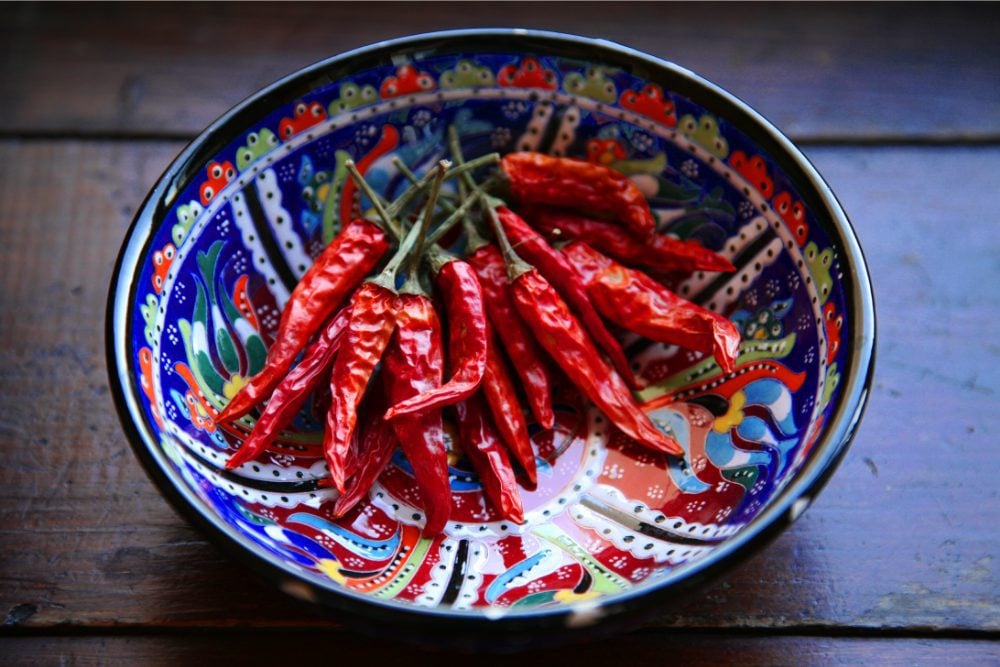 Red chilis are actually ripened and unharvested green chilis, so if you happen to have some lying around your refrigerator then you can use this instead.

Green chilis are often used fresh or roasted, whereas red chilis are more commonly used dried or in powder form.

Red chili peppers are perfect for using in Mexican dishes like chili con carne or for adding a kick to creamy pasta dishes. 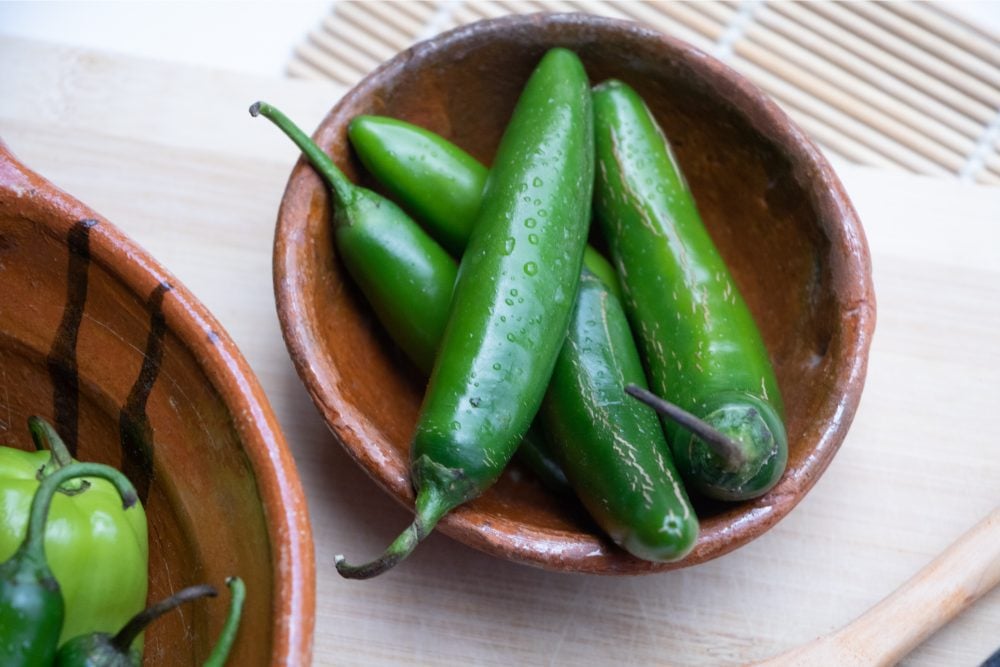 Serrano peppers are quite similar to jalapeno peppers, however, they offer nearly 5 times the heat levels that jalas do. Serrano peppers are one of the best sorts of peppers to use in guacamole as it adds something extra to the creamy cool avocado mixture.

As they are spicier than regular green chilis, you’ll need to add a smaller amount to your recipe to achieve a similar heat level.

I have become quite partial to Thai Chili in my Salsa Verde. I also enjoy fresh pepper (green pepper) in my green enchilada sauce. My son is a hot sauce, Indian Green Chili and Hungarian wax pepper aficionado. I just can’t get used to that taste. To each his own. 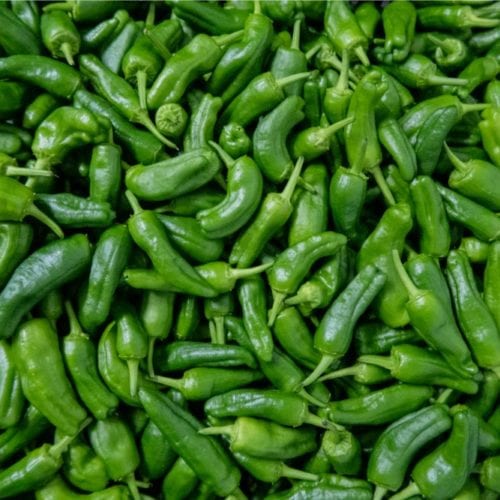 These options are sure to be a hit. So, gather your family and friends and enjoy. Let us know your thoughts!
4.88 from 8 votes
Print Recipe Pin Recipe
Total Time 8 mins
Course Substitute
Cuisine American
Servings 4
Calories 125 kcal

Calories: 125kcal
Keyword green chili substitute
Tried this recipe?Let us know how it was!