You don’t have to be Italian to find the need to put parmesan cheese on top of almost every meal that you have, whether it’s pasta, chicken or even soup, we just can’t get enough of the stuff sometimes, which does mean we tend to run out quite quickly.

Parmesan cheese is known as Parmigiano Reggiano in Italian. It’s made with cow’s milk and aged for at least a year. Parmesan is beloved for its intricate yet unrelenting taste. It strikes your taste buds with notes of brown butter and roasted almonds with a salty and sharp aftertaste.

The taste of shredded or grated parmesan is popular on pasta dishes and pizza. And the name “Parmigiano Reggiano” is legally protected by the Italian government, which also controls the sale and production of the cheese brand “Consorzio, a product created via government decree in 1955. Italians take their food very seriously. 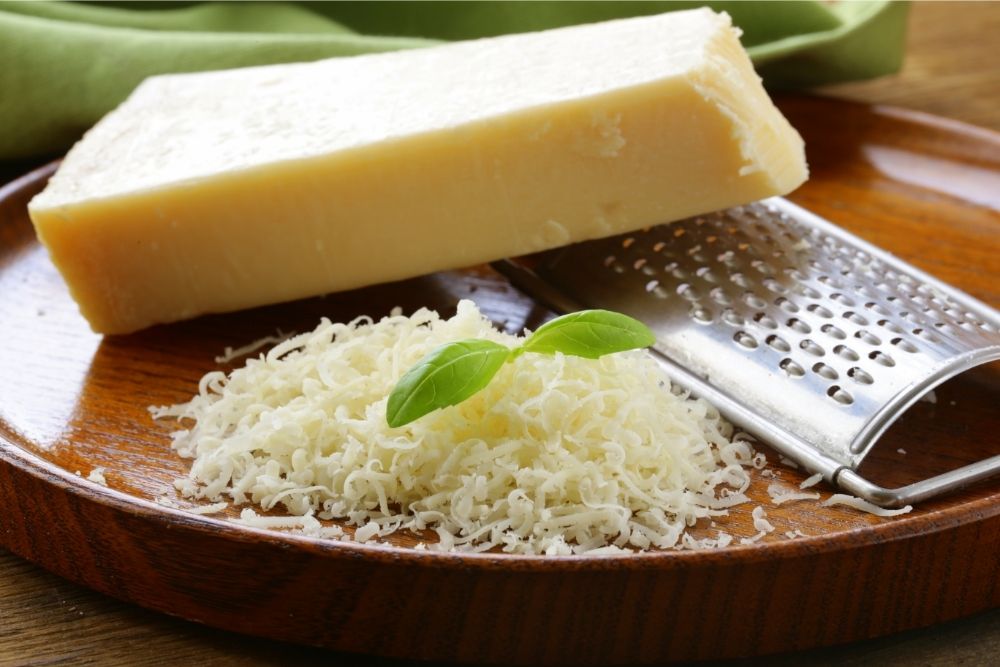 If you love parmesan as much as us but you can’t find any in the grocery store or maybe you’re looking to switch up what kind of cheese you use with your meals, then we’ll be guiding you through the best substitutes for parmesan cheese including dairy and non-dairy options. 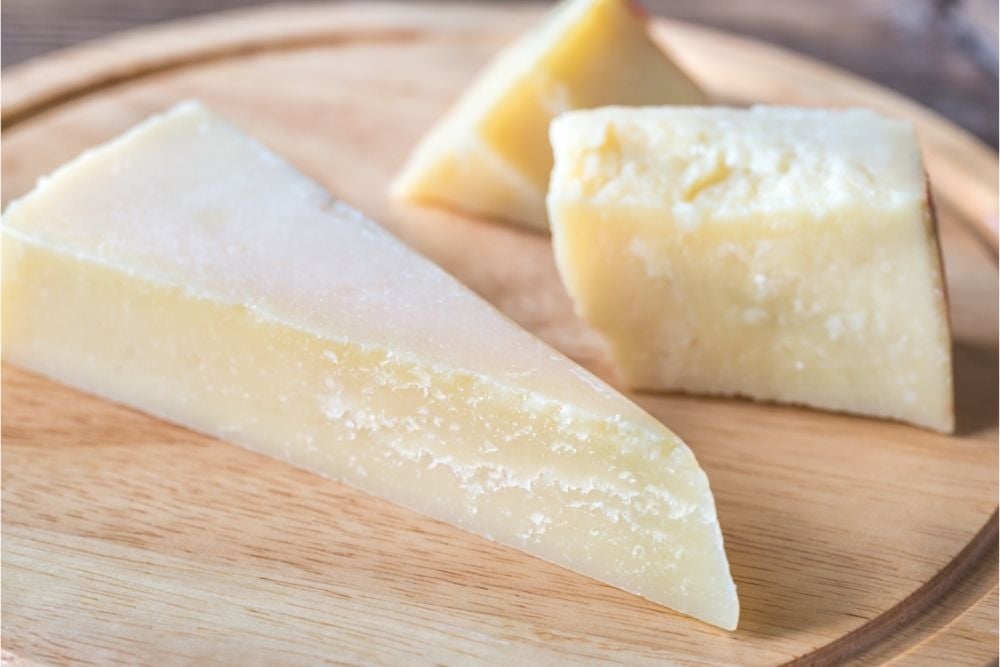 Granada Padano is an Italian cheese that is made in Italy and replicates the nutty strong flavor of parmesan very well.

The consistency is a bit softer than parmesan cheese, which makes it easier to melt into sauces if you want to add a bit of creaminess to a recipe, however, this cheese still works well on top of salads, pasta, and even as an additional topping on pizza.Granada Padano is a very unique cheese as it needs to be made in the region it comes from to retain the traditions of the territory and because there are fewer governing restrictions to produce it making it easier to export to other countries and making it more affordable for those who want to buy it. 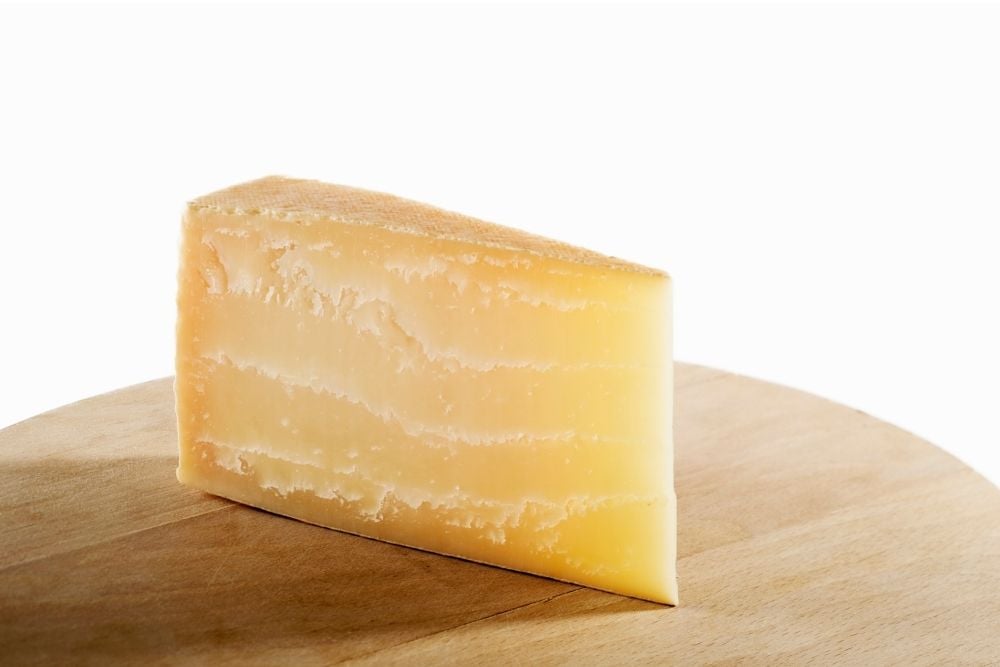 Piave is another cheese made from cow’s milk like parmesan is and is probably one of the closest dairy substitutes that you’ll find to the flavor and consistency of parmesan. One of the differences between Piave and parmesan is that Piave is only matured for 12 months which is nearly a third of the time that parmesan is matured for. However, Piave is still deliciously as nutty as parmesan, however, the taste is noticeably less rich and does have a more subtle sweetness to it. However, once mixed in with a bowl of rich tomato sauce on your pasta, you can barely notice the difference. 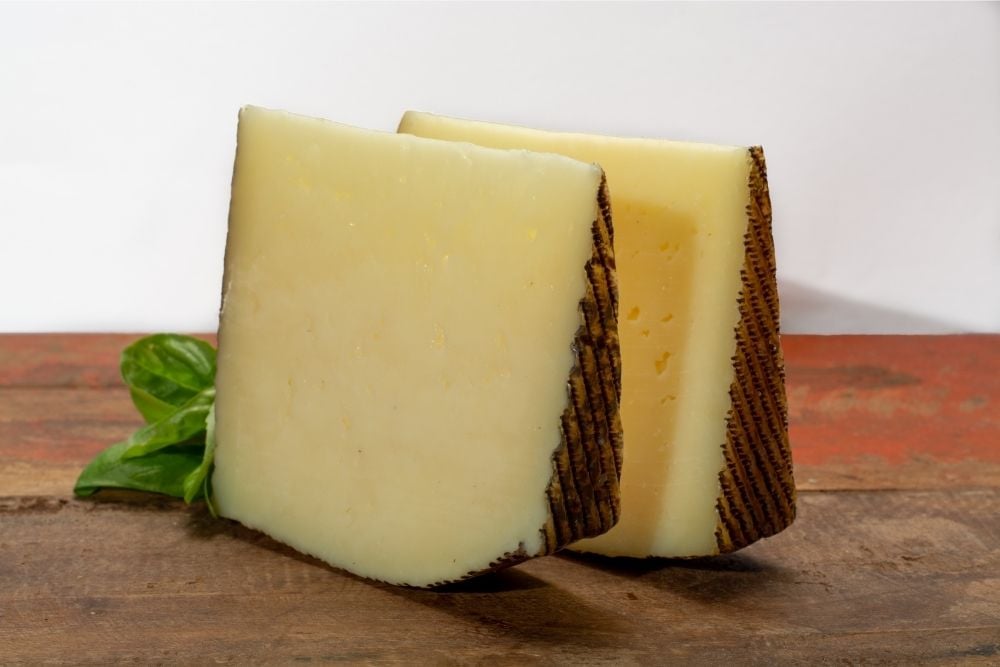 Manchego is another good substitute for parmesan cheese and it just so happens to be the only Spanish cheese on our list of recommendations.

Manchego is paler in color compared to parmesan and has more of an intense, zesty, and slightly salty flavor to it, making it more aromatic than parmesan is. So if you like parmesan but you feel like it’s sometimes lacking in a bit of punch then Manchego may be a better option for you to use. Manchego cheese is paired beautifully with sundried tomatoes, olives, and crusty bread and a deep glass of red wine, however, it still works well with all the traditional dishes that parmesan does. 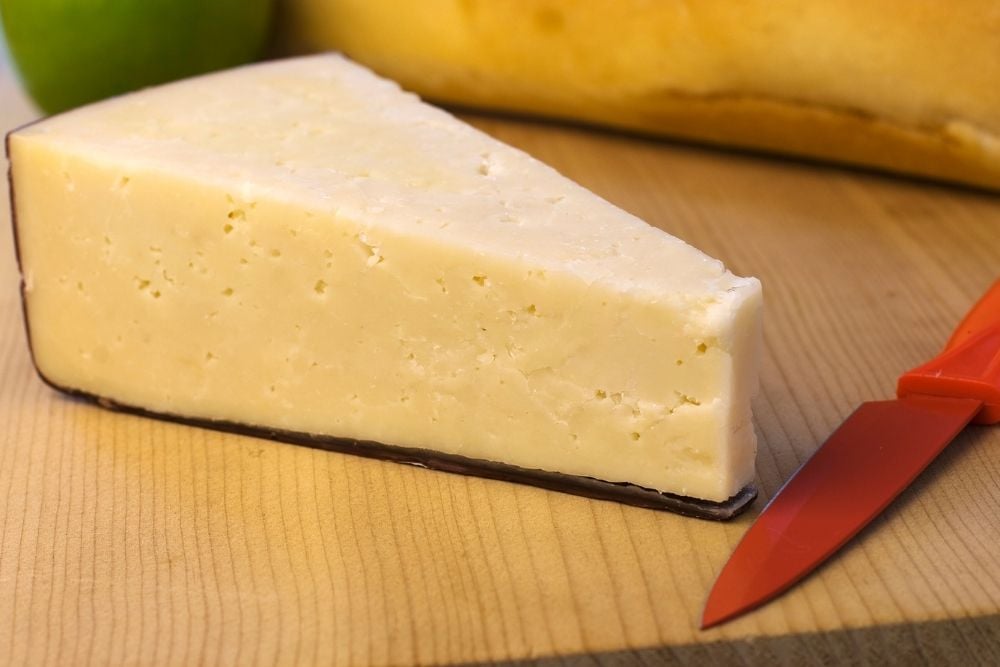 If you’re looking for another cow’s milk that closely replicates parmesan, then look no further than Asiago cheese, it has the same nutty flavoring but is slightly creamier in consistency. Asiago originates from Veneto and Trentino in Italy and is considered an alpine cheese. As Asiago matures more, it develops a sharper flavor making it one of the most versatile cheeses on this list. You can use it for practically everything with aged grated Asiago working well on pasta, pizzas, and salads with fresh and less mature Asiago being used to add richness to sandwiches. 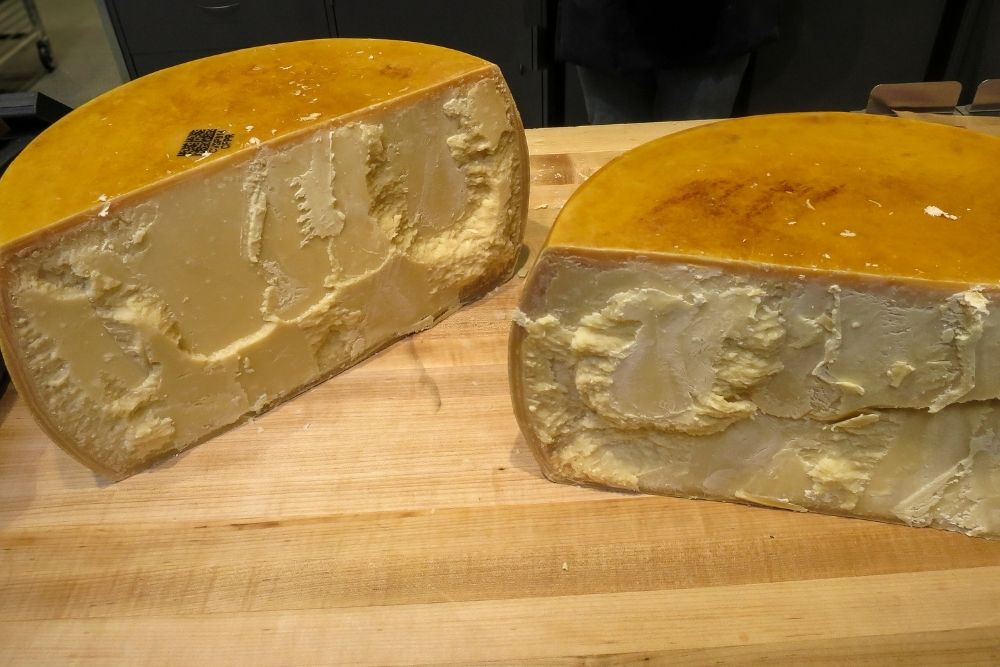 Romano cheese offers a more sharp and salty taste to a dish than parmesan cheese does however it still holds that distinct nutty flavor.

Romano cheese is the term used to describe this sort of cheese in the U.S and Canada and is derived from the Italian cheese Pecorino Romano, however, it is not to be confused with this cheese as that is an Italian cheese protected by EU laws. You can use Pecorino Romano instead of Romano if you can get hold of some as it replicates the flavor of parmesan more distinctly than the American variant does.

Pecorino Romano is made from sheep’s milk and contains a lot more fat than parmesan cheese does, so if you’re trying to keep your fat intake lower then you’ll want to be less generous when applying it to your meals. If you’ve already added lots of salt to your dish or maybe the ingredients you’ve used already have a natural saltiness to them, then be less frugal with adding pecorino as it can easily alter the taste of the dish with the salt flavoring.

If you’re a vegan or follow a dairy-free diet but couldn’t imagine using anything but parmesan cheese to sprinkle over your classic tomato sauce with spaghetti, then soy parmesan will be one of the best substitutes for you as you’ll still get a similar consistency and the nutty taste will be closely replicated as well.As veganism is becoming increasingly popular as time goes on, cheese substitutes, especially ones for parmesan are more readily available, especially in more health-focused grocery stores.

One of the best vegan parmesan cheese around is the VioLife non-dairy cheese wedge which contains soy and nuts and closely resembles that mild yet nutty parmesan flavor. Soy parmesan is cholesterol-free and is a much healthier alternative to dairy parmesan, so if you’re trying to follow a healthier diet then soy parmesan would be an ideal option as you’ll still have that cheesy texture and taste but without some of the bad ingredients.

Remember, even though soy or vegan cheese may be healthier than real cheese, they still may not be considered ‘healthy’ to eat all the time. 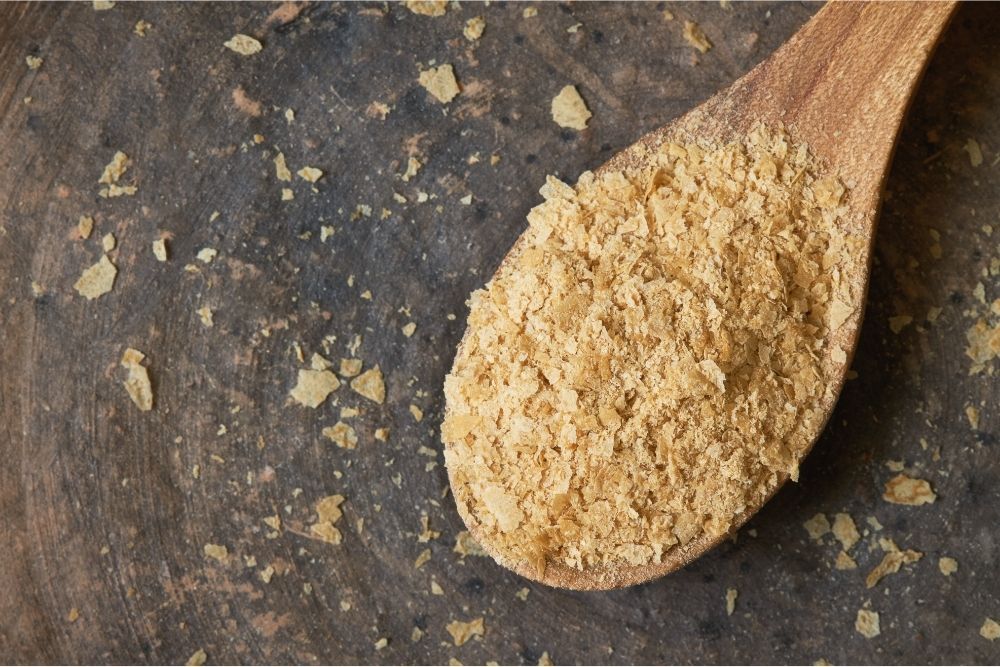 Nutritional yeast is a dairy-free savory food seasoning that is commonly used by vegans or dairy-free to help replicate the cheesy flavor in their dishes without using ‘fake’ cheese. Nutritional yeast also has a hint of that nutty flavor that parmesan also has, so it works as one of the best dairy-free replacements for parmesan. One of the best things about nutritional yeast is that it is already ground powder so you don’t have to grate it when using it with your food. You can stir it into your food whilst it’s cooking, or sprinkle it on top of pasta, meat or veggies before eating for a subtle yet hint of cheesy flavoring. Whilst parmesan may contain good levels of calcium, nutritional yeast is considered more nutritionally beneficial as it contains high levels of minerals, vitamins, and essential amino acids that help lower cholesterol and also prevent muscle loss.It’s high in vitamin B-12 which is something that vegan people commonly lack in their diet as it’s naturally found in red meat and shellfish.However, nutritional yeast won’t create that creamy consistency like dairy parmesan cheese does on your food so if you’re looking for that sort of replication then it’s probably best to use vegan parmesan cheese.

We all know that parmesan is the perfect companion to pair with a rich tomato-based bolognese spaghetti, but what else can you pair the popular cheese and its substitutes with? Below is a recommendation of our favorite parmesan and parmesan substitute recipe that we love to cook all the time. Our parmesan crusted chicken is one of our go-to weeknight recipes as it only takes 25 minutes but never fails to bring compliments to our ears.

The main ingredients you’ll need are:

Preparing this recipe can get a little messy so it’s best to have a good selection of bowls on hand to make sure you reduce the amount of fall out of the ingredients as you’re coating the chicken breasts. One other great way to use parmesan cheese or any of the substitutes above is by sprinkling it over or cooking it with fresh vegetables.

Eating plain roasted or boiled vegetables can grow boring after a while, so adding something like parmesan, vegan parmesan or even nutritional yeast on top makes it a lot more interesting and enjoyable to eat. This is a very helpful tip if you’ve got young children who avoid eating their veggies on their plates at all costs. 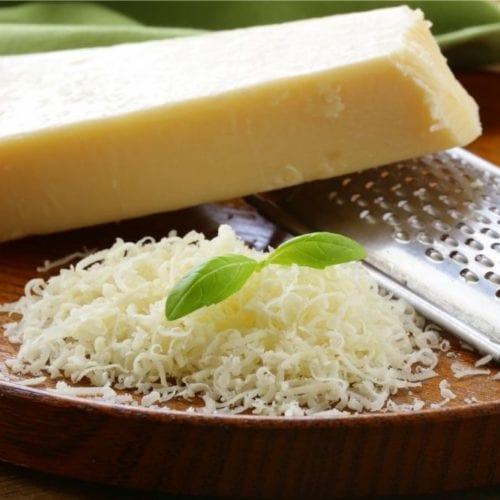 These options are sure to be a hit. So, gather your family and friends and enjoy. Let us know your thoughts!
4.84 from 6 votes
Print Recipe Pin Recipe
Total Time 9 mins
Course Substitute
Cuisine American
Servings 3
Calories 144 kcal

Calories: 144kcal
Keyword parmesan cheese substitute
Tried this recipe?Let us know how it was!