Fennel is a strange vegetable with a very powerful taste. When you first bite into fennel, you might be surprised by just how strongly the taste resembles licorice.

Fennel is in the same family of herbs as caraway, anise, cumin, and dill. This herb has a long history; at times, fennel has been used for several purposes, including medicinal usage, cooking, and magical purposes. We know that the Ancient Egyptians used fennel, and in Ancient China, this pungent herb was used to heal a snake bite. People hung fennel in doorways to scare away evil spirits in the Middle Ages. Also, fennel is associated with Ancient Greek because one of the first marathon runners ran to Sparta with a sprig of fennel. It’s amazing how much history some herbs have.

Interestingly, fennel doesn’t have any association with licorice or the aniseed which gives it its flavor.

This licorice-like taste can be very dividing. Licorice is definitely a flavor that people will either completely love or completely avoid. 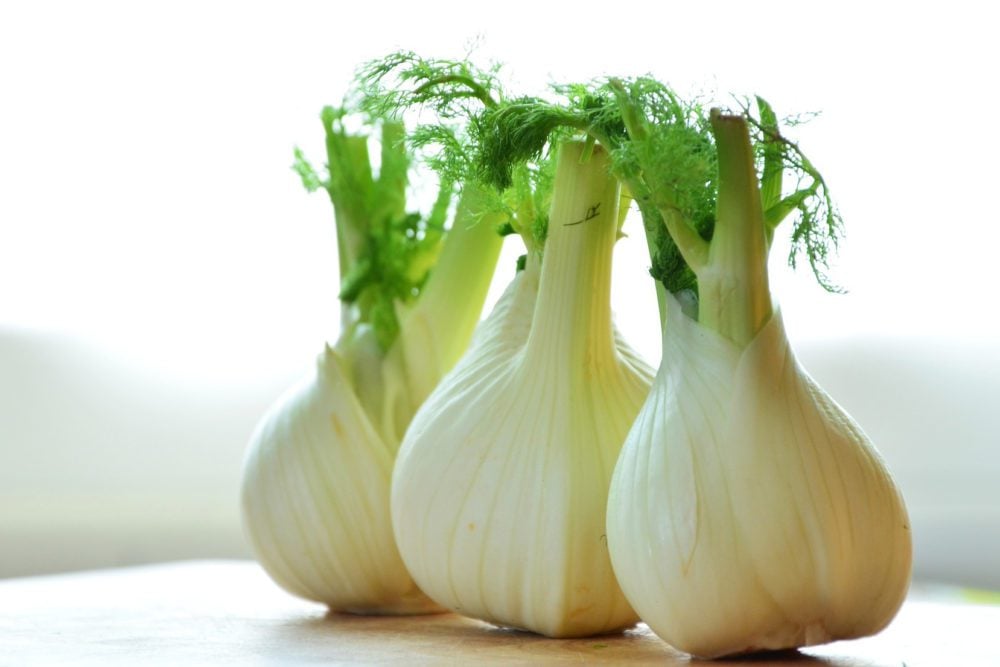 But, even those who enjoy a licorice rope might not enjoy the same flavor in a savory vegetable dish.

So, what can you do to replace fennel? Luckily, there are plenty of delicious ways to swap out fennel.

As fennel is edible from seed to stem, we will provide you with the best substitutes for every single piece of the fennel plant.

Let’s start with the most recognizable part of the fennel. Fennel bulbs are the large, bulbous section at the base of the plant.

This is the part that has the strongest flavor and is most commonly used in vegetable dishes. Here are the best substitutes for the fennel bulb:

Bok choy is a hugely underrated ingredient. It is sometimes used in salads but deserves to be much more popular. Bok choy can be eaten raw or it can be fried or roasted.

Bok choy might look like just another type of flavorless lettuce. But it has a much stronger flavor than you would expect. It has a bold peppery taste that will be powerful in any dish.

It doesn’t have a licorice-like flavor like fennel. But it will have a similar effect on dishes and definitely pack a punch. It has a similar taste to mustard seeds.

Bok choy doesn’t have quite the same texture as the fennel bulb. Bok choy is much softer than fennel. And becomes even softer when cooked.

Whereas fennel will still retain some of its crunchiness. But this won’t have much of a difference. Depending on how long you cook the bok choy, it can still retain some crunch. But the leaves will become soft and wilt like spinach.

Leek is another great alternative to fennel. The taste of leek is very different from that of the fennel plant. But it has a relatively similar texture.

Leeks become quite soft when cooked. But it will still retain its shape and can be roasted, fried, or boiled.

The taste of leek is much milder than bok choy or fennel. It is closer to onion in its flavor. Like fennel, you can eat leek raw but it won’t be particularly nice.

Bok choy is the best substitute for fennel if you want to use something raw in a salad.

Although the leaves of a leek are edible, they don’t taste particularly nice. They are very tough and bitter.

Unlike fennel, which can be consumed entirely, the best part of a leek is the white and pale green stalk. This part of a leek cooks very quickly and can take on a lot of flavor and seasoning.

This might be a bit of a surprising one. Celery gets a bad rap for being a “health food”. Although it is lacking in calories, it definitely isn’t lacking in taste.

Celery is most often eaten raw. But it can also be cooked or fried.

Celery, as you likely know, is very crunchy when raw. Although it is usually used as a vehicle for dips, celery has its own powerful taste.

It has an almost peppery flavor that does well to mimic the effect of fennel, without the overpowering licorice taste.

Although you might not see very many recipes for it, celery can be easily cooked. It is best when roasted and seasoned with garlic and herbs.

When roasted, celery will become slightly soft but still retain its crunchy texture. This is very similar to the texture of a roasted fennel bulb.

Fennel isn’t always sold with its leaves. This is because most people prefer to only eat the bulb.

But the leaves are also edible and can be used in the same way as many fresh herbs. Here are the best herbs that can be used to substitute fennel leaves:

In terms of texture, dill is by far the closest to the leaves of a fennel plant. For flavor, dill is quite different.

The leaves of a fennel plant have the aniseed taste that runs through the entirety of the plant. But they have a fresher taste. This is more similar to lettuce.

Both dill and fennel leaves are fragrant. But fennel has a more intense and more bitter taste. Whereas dill is lighter and usually used in light dishes, usually alongside fish and white wine sauces.

Cilantro is another ingredient that people either love or hate. Some people enjoy the bitterness. Whereas the other most common opinion is that it tastes like soap.

But, if you enjoy the taste of cilantro then it can provide a similar bitterness and freshness to that of fennel leaves.

If you want something to replace the fresh grassiness of the fennel leaves, then dill is the best option.

But, if you want something strong and bitter (but just not something that tastes like licorice) then cilantro is definitely a good choice.

Fennel seeds also have a licorice/aniseed flavor. Star anise, as you might have guessed from the name, also has a similar taste to aniseed. But, don’t worry, it isn’t nearly as strong a flavor as fennel.

Star anise is commonly used in recipes that also call for cinnamon and nutmeg. Aniseed would be much too jarring a flavor to include alongside these spices.

Star anise only has a slight aniseed flavor, it also has a mild spicy flavor that is similar to cinnamon.

Star anise can be used in a wide variety of dishes. From bakes to mulled wine to curries. It’s a good idea to always have a pot of star anise on your spice rack.

You might be more familiar with cumin as a spice. But cumin seeds are also edible. Cumin seeds have a slightly different flavor than fennel seeds.

Whereas fennel seeds have a sharp flavor, cumin seeds are more aromatic.

They do still have a very strong flavor, however, so make sure to only add in the same number of seeds as the recipe asks for.

Fennel is a very unique food in both shape and flavor. But there are a lot of different foods that can be used to replace it.

What can I use if I don’t have fennel?

Fennel bulbs are a versatile ingredient, with a strong aniseed taste that can be eaten cooked or raw. When substituting, there are different parts you may be looking to replace.

If substituting the bulb, the best thing to use is bok choy. Bok choy has a more peppery flavor than fennel, but it’s similar in texture. This is particularly good for replacing fennel in salads. However, it becomes softer when heated.

Another good option is celery. Celery can be eaten raw or cooked, and stays crunchy when cooked. If replacing fennel leaves, then dill or cilantro are the best choices. Dill has a similar freshness, where cilantro is closer to the bitterness of fennel leaves.

To substitute the seeds, try either star anise or cumin seeds. Fennel seeds have a similar aniseed taste to the bulb, which the star anise mimics.

What spice can you substitute for fennel?

The closest spice substitute for fennel seeds is star anise or anise seeds. Fennel seeds have a licorice taste, which can be quite strong. Star anise is a milder spice, and is often used in sweet as well as savory dishes.

If you want to avoid the strong aniseed flavor, these are the better choice. Anise seeds are potent, and will impart a strong flavor, close to that of fennel. Alternatively, try cumin seeds. Cumin is aromatic, with an earthier flavor than fennel. However, it can work as a direct substitute.

Other options include dill seeds and caraway seeds. These are both milder than fennel seeds. Before using whole seeds, they need to be toasted to release the flavor. To do so, heat up the seeds in a dry pan. Cook for about 5 minutes, until the seeds are lightly browned and aromatic.

Are fennel and cumin the same?

Fennel and cumin are not the same. Both seeds belong to the Apiaceae family, but are harvested from different plants. There is a distinct flavor difference between the two. Cumin has an aromatic earthy taste, which can be bitter.

Fennel seeds taste similar to licorice. Both seeds can be used for cooking, adding strong flavor to a dish. However, they aren’t interchangeable. Cumin can be a substitute for fennel, but the better option is star anise or anise seeds.

To substitute cumin, the best options are caraway seeds or ground coriander. Fennel is also used to refer to the fennel bulb. This is a vegetable that’s popular for use in salads, but can also be cooked.

Similar to fennel seeds, it has a strong licorice taste. You can substitute fennel bulb with the seeds, but this will greatly alter the texture of the dish.

Is star anise the same as fennel?

Star anise is not the same as fennel, although they have a similar licorice flavor. Star anise is milder in flavor than fennel seeds. It also has a slight spice to it, similar to that of cinnamon.

Due to the milder flavor, star anise is popular in sweet and savory cuisine. It’s used in wine mulling, and is often associated with Christmas. The lighter flavor works well alongside cinnamon and nutmeg where aniseed would over power.

It also features in many curry recipes, often in the pods. Star anise comes in either large star shaped pods (hence the name), or it can be ground into a powder.

The flavoring of fennel seeds is much more powerful, which is why some prefer to replace it with star anise. Fennel seeds can be used in sweet dishes, but they’re more commonly added to savory foods. 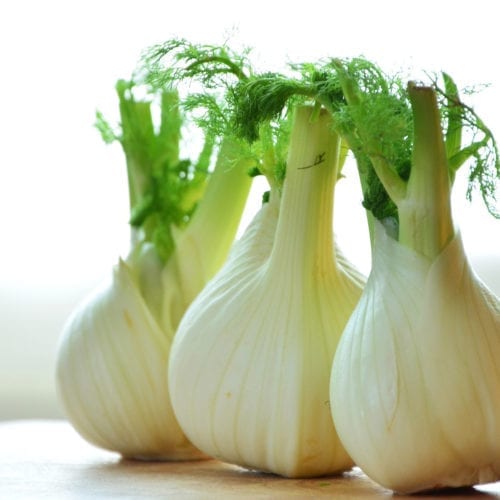 These options are sure to be a hit. So, gather your family and friends and enjoy. Let us know your thoughts!
5 from 7 votes
Print Recipe Pin Recipe
Total Time 10 mins
Course Seasoning, Substitute
Cuisine American
Servings 4
Calories 123 kcal

Calories: 123kcal
Keyword fennel substitutes
Tried this recipe?Let us know how it was!