Originating from many centuries ago, the flour tortilla is a traditional Mexican food that has sustained its popularity all over the world. Coming from the Spanish word “torta” which translates as cake, tortillas are actually a thin flat bread usually made from ground maize.

I've always been a big fan of homemade tortillas. I like cassava flour for my tortilla wrap though a spinach tortilla is a wonderful gluten free tortilla.

Used as the base for many traditional Mexican dishes such as enchiladas and burritos, tortillas are simple to prepare which makes them a hugely convenient necessity for busy households who may not want to waste lots of time making meals. There is a reason why tortillas are so popular.

Not only do they taste amazing but they can be incorporated into many different dishes making them extremely versatile and cost effective for those who like to budget their weekly shopping.

With veganism also on the rise, many brands have started to ensure that their products are vegan to accommodate the demographic, especially because this can also make the food healthier in the long run.

As people try to live healthier lifestyles and prepare their food from scratch, it’s important to make sure that the basic ingredients and foods you have can be consumed by the majority of people.

So are tortillas vegan? And what can you use them for? That’s why you’re here and we’ve got the answers for you!

We’ve researched everything you need to know about vegan tortillas so you don’t have to look any further. In this article, we answer whether tortillas are vegan or not, what is the most traditional tortilla, what brands of tortillas are vegan and what kinds of vegan dishes tortillas can be used for.

By the end of this mini guide, you’ll have an idea of why tortillas are such an essential and accessible food to have in your regular shop as well as their benefits. 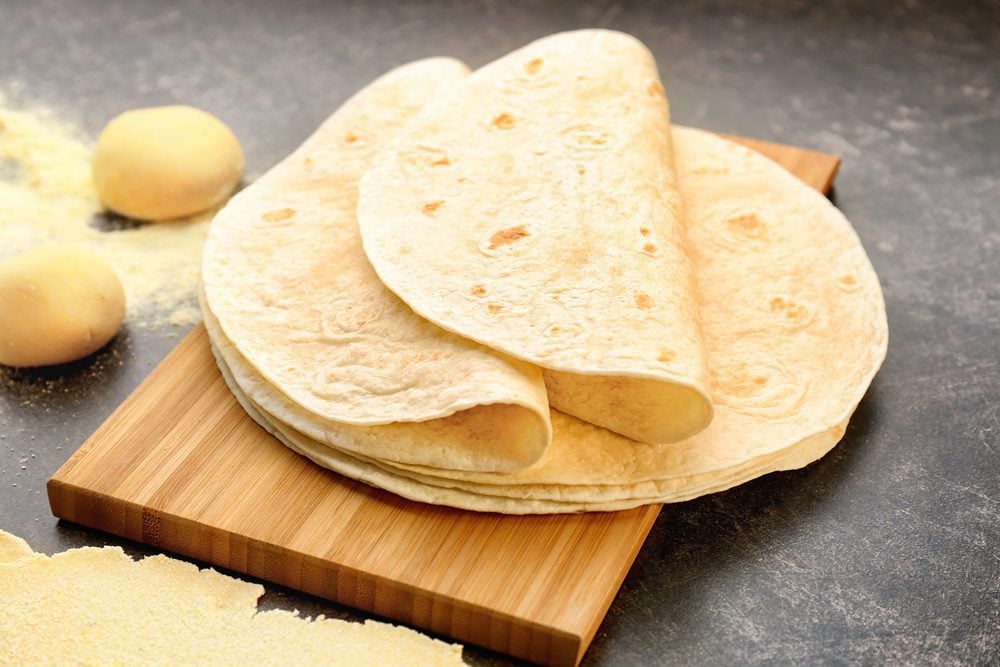 Tortillas are generally vegan as they are made from ground maize and flour. The simple ingredients and preparation means that they can be prepared away from any meats or animal byproducts.

Always bear in mind, however, that some brands may use oil which is then fried in lard which is not vegan as it is a cheaper way to mass produce tortillas.

When choosing which tortilla to purchase, always check the ingredients list to make sure that it is vegan. Nowadays products will usually say that it is suitable for vegetarians and vegans on the front of the packaging for extra convenience.

What tortilla is the most traditional?

Corn flour tortillas are the most traditional and popular kind of tortilla which is ideal because they are always vegan as they require no oil. Simply made with corn flour and water, tortillas have become an essential item in many kitchens around the world thanks to their simplicity and versatility for many dishes.

Wheat flour tortillas have been viewed as a healthier alternative even though they have additional oil added to the ingredients. Corn flour tortillas are actually lower in fat and full of natural fibers and whole grains making it an ideal pick for people who are watching their carb intake.

What brand of tortillas are vegan?

The best brand of tortillas that vegans should go for is Guerrero. Not only are all of their tortillas vegan but their corn flour tortillas are also gluten-free for those with extra dietary requirements.

There are plenty of vegan tortilla brands on the market because tortillas are traditionally made without any animal byproducts making it highly accessible for vegans.

If you are in doubt even after viewing the ingredient list, always research online to see if they use oils and lard for frying the tortilla. As most brands provide corn flour tortillas, you are almost always guaranteed to have a choice that is suitable for.

What vegan dishes can be made with tortillas?

As mentioned previously, there are many vegan dishes that can be made with tortillas. The most popular options are burritos and enchiladas which are both traditional Mexican dishes.

When it comes to the fillings, you can easily avoid using cheese and opt for a dairy-free option or shun cheese altogether and opt for something completely different.

When it comes to vegan Mexican dishes, guacamole is one of the best fillings as it helps to compliment spicier fillings whilst also being completely natural and delicious and easy to make yourself.

In conclusion, it’s always advisable to check the ingredients list when looking at a new brand of tortillas, however, the majority of tortillas on the market are vegan and shouldn’t be a problem to purchase.

Tortillas are packed full of fiber and because of their thin structure, they aren’t overwhelming like bread. They have longer shelf life than bread and can be used for small and larger meals which is particularly great for family gatherings or buffets where people can fill up the food with what they like.

Whether you are new to trying tortillas or are an aficionado at Mexican cooking, it’s clear that there are plenty of options available for vegans. With a variety of different flavors and different types of flour, herbs and spices, there is so much you can do with tortillas to bring something new and exciting to your meals.

The best part is is that they are super easy to make by hand as well for those who prefer to prepare their meals from scratch as the basic tortilla only needs two ingredients and not a lot of time at all.

More often than not, flour tortillas are vegan because they are made from a few simple ingredients; flour and ground maize.

It is worth noting that on some occasions, these tortillas may be cooked in lard or butter, or they may be made using preservatives that aren’t vegan friendly.

Despite this, many brands use vegetable oil to make tortillas and corn flour tortillas don’t contain any oil so they tend to be suitable for both vegans and vegetarians.

If you have any hesitations regarding the ingredients that have been used to make the flour tortillas, you should always check the listed ingredients beforehand.

The packaging of the tortillas will state their suitability for those with different dietary requirements.

What brand of tortillas are vegan?

There are now many brands that produced vegan tortillas due to the growing concerns regarding the use of unhealthy fats, however, this doesn’t apply to all brands as some will still use ingredients that aren’t vegan friendly.

Guerrero tortillas are vegan-friendly because they do not use any types of cholesterol, fats, lards, or other ingredients that come from an animal source.

Mission tortillas are also vegan and vegetarian friendly as they are not made using any ingredients that derive from an animal. Instead, 100% corn masa flour is used. They also do not contain any dairy and are gluten-free too.

La Tortilla Factory also offers tortillas that are vegan-friendly as well as gluten-free.

If you are uncertain of the exact ingredients that brands use to make their tortillas we would advise you to take a close look at their ingredient list.

Some will claim to be vegan friendly but closer inspection of their ingredients suggests otherwise.

However, there are now many brands that make vegan-friendly tortillas so there are options available to accommodate your dietary needs.

Do tortillas have eggs or milk?

Generally, traditionally made tortillas do not contain any products such as eggs or milk. Whilst eggs aren't vegan-friendly, milk isn't suitable for those who are lactose intolerant.

It is worth looking at the ingredients in detail beforehand to confirm that they do not contain both or either of these ingredients. Some will use preservatives that contain other dairy products.

Most are made using flour, salt, and ground maize and in some instances depending on the brand, they will be made using lard, though you may come across some that add products such as milk and butter to their recipes.

Some brands use dairy ingredients to make their tortilla wraps. As mentioned, for guaranteed assurance that the tortillas do not contain eggs or milk you will need to read the ingredients listed on the packaging.

Whilst it is easy to identify the listing of eggs or milk, other ingredients are not so easy to pinpoint.