Salami is a cured sausage made from fermented and/or air-dried meat. There are an array of different varieties of salami available. Traditionally it was only ever made from pork.

Although nowadays, it is made with all sorts of meat including; beef, lamb, duck, venison, even horse or donkey – or a mixture of any of the above. 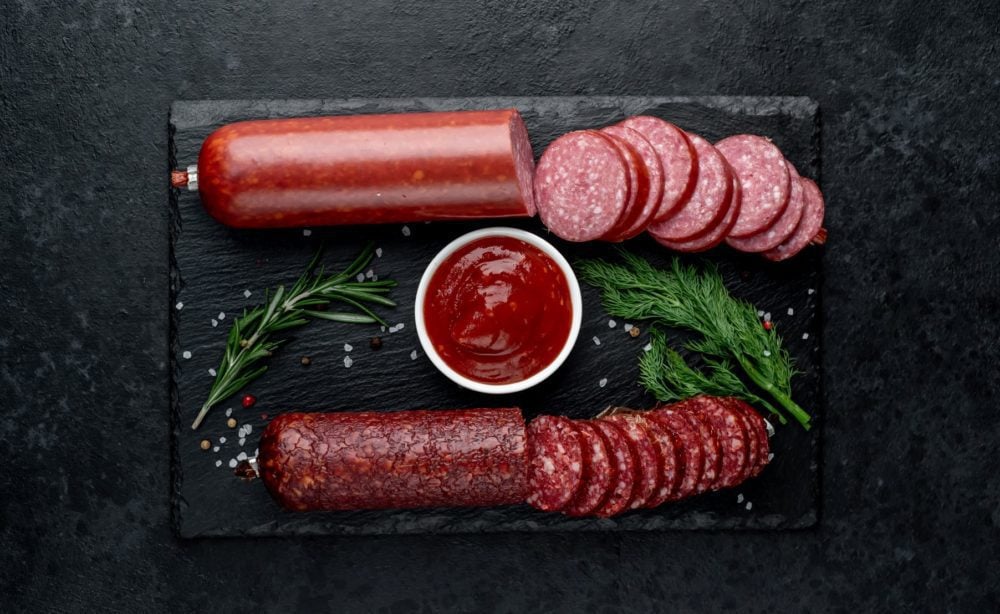 The distribution of fat throughout the meat usually depends on how the meat has been packaged.

When it is packed by hand, the fat often blobs into visible chunks. However, if the salami has been machine packaged, the fat is typically more equally distributed throughout the meat.

Some of the most common salami varieties you’ll find at your local deli counter or supermarket include hard salami and genoa salami. But what’s the difference between the two?

In this article, we’ll outline the key differences between the two varieties and consider how they compare. To do this, we’ll take a look at a few different factors, such as ingredients, flavor, and texture.

Is salami pork? Genoa salami is usually made from pork. However, it is common to see it made from veal and beef, too. Beef salami is a favorite in my house as well as Italian salami.

Hard salami is pretty much always made from pork. But it is sometimes made with a pork and beef blend. Pork meat and pork fat are problems for some dietary conditions. Pork salami cannot be kosher salami. Traditional salami is not kosher.

Due to the amount of meat used to make hard salami, the color is often darker than the color of genoa salami.

Both of these salami varieties are flavored with red wine and lots of garlic. This helps to create a smoky, fermented taste.

Hard salami usually harnesses more of a smooth flavor, though. This is because it is smoked after it is cured.

Genoa salami has quite a bright and acidic flavor which isn’t as mild as hard salami. Genoa salami also contains a lot more spices than its hard counterpart, contributing further to its great flavor.

The origins of Genoa salami are pretty self-explanatory. This variety was born in Genoa, in Northern Italy. Hence the name and authentic Italian taste.

The origin of hard salami is a little more tricky to pinpoint. However, it is believed that this variety first sprung up in Europe.

More specifically, it was probably either Poland, Germany, or what is now the Czech Republic.

Fortunately, both hard and Genoa varieties of salami are widely available across the United States. Check your local deli counter.

Both hard salami and Genoa salami are categorized as “dry sausage.” This just means that the meat is dried, air-cured, and seasoned.

Genoa salami has a soft texture compared to other dry sausages. This is because the fat content in this variety is rather high, therefore it secretes more grease.

As the name suggests, hard salami is pretty hard. Some people compare the texture of hard salami to being firm, dry, and almost rubbery.

One of the benefits of including salami in your diet is its mix of B vitamins. This family of vitamins can help your body process food to make energy, among other functions.

Genoa salami is especially rich in thiamine (B-1), pyridoxine (B-6), and B-12, supplying between 15 and 21 percent of the DV for these nutrients.

Among older adults, deficiency in vitamin B-12 has become common and contributes to a higher risk of dementia and stroke.

Both Genoa salami and hard salami can be enjoyed as part of a healthy diet and incorporated into plenty of nutritious dishes.

Each salami has its own unique properties.

If you want a rich and flavorful taste experience without any toughness, consider getting some genoa salami. On the other hand, if you prefer drier meats with milder flavors, we recommend giving hard salami a go.  Just look at the actual product packaging or deli meat container. Select cuts from your butcher with the spice and ingredient your prefer.  I enjoy both on pizza with a little black pepper, olives, mozzarella cheese, and olive oil.  Other salami types include cured meat, prosciutto, prosciutto crudo, Italian cured meats, pepperoni, charcuterie, Milano salami, and other Italian meat.