Mayonnaise is a special sauce that has become popular due to its versatility. Often, we slather it on a sandwich, potato, salad, hamburger, bread, or whatever for added flavor and moistness.

For Japan, the change became more pronounced following the 1923 Great Kanto earthquake when cultures were fast-influenced by the West. As a result, it became pertinent that the company adjusts itself to the ongoing changes. By 1925, Shokuhin Kogyo had launched its new line of business—Kewpie Mayonnaise.

Kewpie Mayonnaise is the brainchild of Toichiro Nakashima. During a brief stint in the US Ministry of Agriculture and Commerce, he discovered mayonnaise for the first time. He returned home with the condiment and set out to create what became an instant success and is today’s best-selling Japanese mayonnaise.

The base ingredient of Kewpie mayonnaise is egg yolk. This ensures its superior custard-like texture compared to regular mayonnaise. The egginess in this Japanese mayonnaise is far more pronounced than America’s Duke’s, Hellmann’s, Sir Kensington’s, etc.

It also contains vinegar and MSG to deliver tanginess and umami. While its popularity hit a few stones in the West due to its MSG content, there was no denying that Kewpie mayonnaise unleashes a dash of deliciousness on anything it touches.

That’s pretty much everything to expect from Kewpie mayo. Moreover, it contains no sugar, so do not anticipate any “sweetness,” so to speak. However, it has a salty side to it, and as you please, you may add some pepper, curry, etc., to enhance the taste.

The main stand-out features of Japanese mayonnaise (Kewpie) stem from its color, taste, and texture. This is due to the slight differences in ingredients compared to American (traditional) mayonnaise. As for color, the former tends to be far more yellowish than the latter. The reason is that Japanese mayonnaise is made with yolks, not whole eggs. The regular ones are usually off-white.

In terms of taste, the Japanese mayonnaise delivers a burst of eggy, umami, savory flavor, which regular mayo lacks. This is due to Kewpie’s insistence on including MSG in their product, which is usually the deal-breaker for the American and European markets.

Many still hold the erroneous notion of the 1900s that the substance makes people feel sick. On the flip side, the FDA says it is safe to consume. Therefore, all those claims about MSG being unhealthy or posing health risks to the body do not hold water. While cases of allergies are justified, the rest is mainly due to widespread misinformation.

Still speaking of taste, Kewpie has zero sugar content which is very much unlike the regular ones. American mayonnaise is usually sweet due to its sizable sugar content. Thirdly, where Kewpie uses apple cider or rice vinegar for tangy, natural sweetness, American brands tend to go for distilled vinegar.

Finally, Japanese mayonnaise is usually thicker and creamier than regular ones. The reason is not far-fetched; it is because it is made with only egg yolks. Therefore, besides its bold eggy taste, it holds a silky, fluffy mouthfeel. Thanks to the company’s proprietary emulsification process that delivers pleasingly-rich textural consistency.

Overall, the Japanese version wins in all categories—flavor, texture, taste, etc. However, feel free to explore and decide which works for you.

Due to a widespread rejection of MSG in the West, Kewpie now has a separate product for the American market. You guessed right; it does not contain MSG. To make things more interesting, American Kewpie is made in America for Americans. Make no mistakes; this was merely a marketing decision to suit the demands of a market and does not stem from a place of favoritism. For example, the Kewpie mayo sold in China is sweeter than those in Japan because the Chinese enjoy using mayonnaise to marinate fruits. In the same vein, the Malaysian version contains chili and other spices because the local population mostly loves spicy foods.

The MSG content in Kewpie mayo has been the product’s selling point for the longest. So, what happened to the signature umami smack? The company intuitively substitutes MSG for yeast extract. While this gives off similar savoriness, lovers of the Japanese variant say it is not there in terms of taste. Also, unlike the Japanese Kewpie mayo, the US variant contains sugar and mustard flour.

In terms of packaging, both come in a similar star-shaped-nozzle squeeze bottle. However, the American variant is somewhat tougher (not as easily squeezable) than the Japanese. The latter comes in a kewpie doll-design transparent wrapper that is easily detachable, while the bottle is plain (no lettering). That said, when you see a Kewpie mayo with a mayonnaise-dressed sandwich in grocery stores, you know it is the American version.

The American one also tastes great, but enthusiasts like myself unequivocally favor the one produced in Japan for its second-to-none umami note. It is distinctively creamier and more delicious. It easily enhances your dipping sauce, egg salad, burger, etc., without having to slather as much cream.

Having discussed the differences between Japanese and American-style Kewpie, let’s dive in a little more. As previously mentioned, the inherent differences stem from the ingredients, not the production process.

For the most part, both condiment variants feature the same lineup of constituents, except that the company substitutes monosodium glutamate (MSG) for yeast extract. Also, the latter adds a few extra elements for a distinct perspective. Be that as it may, egg yolks remain the backbone of Kewpie mayo as opposed to regular mayo, which contains whole eggs. This makes for the product’s deeper yellow color and thicker texture.

Japanese Recipes You Can Try With Kewpie Mayonnaise

Kewpie mayo goes with almost any meal and adds a quick dash of flavorful enhancement. As a versatile sauce, you may enhance your salad dressing, grilled cheese, soy sauce, and other dipping sauces. Mayo serves as an everyday condiment for Japanese people. In fact, they eat it with vegetables.

Below are the top picks of iconic Japanese dishes to try Kewpie mayonnaise with.

Where to Buy Kewpie Mayo

Kewpie mayonnaise is today by far the best-selling mayo out of Japan, grossing billions of dollars every year. Due to the ever-increasing demand for Japanese mayonnaise, it has become widely available in grocery and e-commerce stores. You can walk into Whole Foods Market, Walmart, Target, Kroger, or Albertson and be sure to find a bottle of the Kewpie brand.

Alternatively, you can order online at the company’s official website, Amazon, and other platforms. Moreover, look out for sales and vouchers. You may get free shipping and discounts on your order.

For physical store-bought mayonnaise, ensure you read the ingredients lists if you cannot tell the difference. The Japanese version has a transparent wrapper with a Kewpie doll printed on it, while the other has a sandwich design on the bottle (not easily detachable). You will find either in a squeeze bottle with a red cap. Better still, ask one of the attendants to direct you.

Can I Substitute Japanese Mayonnaise With Regular Mayo?

Kewpie mayo isn’t widely available yet. You may find it in the grocery store’s foreign goods section or in an Asian supermarket. But what if you can’t get your hands on it? Don’t worry; you can make your own Kewpie mayo from scratch.

While mayonnaise contains egg yolks, it doesn’t mean it’s healthier for you. Egg yolks are rich in vitamins, omega-3 fats, folate, etc., which are beneficial to the body. Regardless, consuming ten yolks every day is certainly not a smart decision.

Also, where regular mayo contains 5–10 grams of fat, Kewpie mayo houses a whopping quantity of 20 grams. On the flip side, Kewpie mayo does not contain sugar, whereas regular ones usually have some sugar.

Bear in mind that both have saturated fat, which is generally unhealthy and may pose significant health risks when consumed excessively. Hence, it is best to consume your preferred option sparingly.

Though Kenko is a relatively new brand, it has grown to be one of the biggest mayonnaise brands in Japan, just behind Ajinomoto and Kewpie. Both are similar in terms of packaging and ingredient lineup, but with some notable differences.

First off, in terms of ingredients, not all Kenko mayo contain egg yolks; some are made with whole eggs. Secondly, the brand generally contains no MSG, one of Kewpie’s most significant selling points. Therefore, that extra-rich eggy flavor and umami punch that makes Kewpie a cult favorite is missing in the former. Thirdly, Kenko mayo has a noticeable lighter and fluffier mouthfeel than the latter. Lastly, though both come in a similar squeeze bottle and print design, Kenko mayo is cheaper. 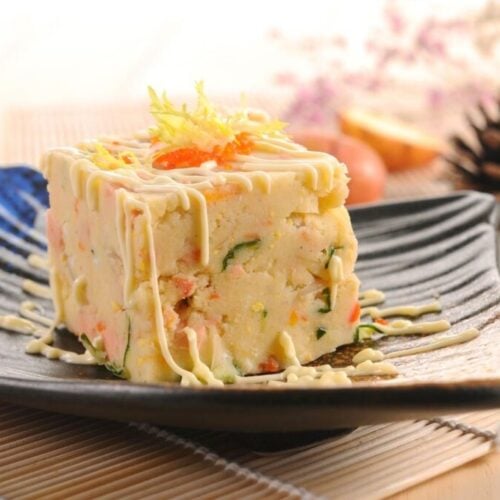 For some reason, if you don't have Japanese mayonnaise within your reach, you can follow these steps to make it yourself. (This follows the 70/30 blending ratio as seen on the company website).
5 from 8 votes
Print Recipe Pin Recipe
Prep Time 5 mins
Total Time 5 mins
Course Seasoning, Substitute
Cuisine Japanese
Servings 1 cup
Calories 1917 kcal

Moreover, you can use an air-tight container and store it in the fridge. With proper storage, it should last up to one week.

Once you taste Kewpie mayonnaise, the chances are that you want to stick to it over the regular. Now is a good time to get a bottle if you have never tasted it.

If you can’t buy it, make it yourself. Follow the instructions above. You’ll be able to enjoy your homemade mayo in no time. Don’t forget to share it with family and friends.