When it comes to breakfast foods in France, you would be forgiven for thinking that they are sustained only by flaky pastries and coffee. However, there is so much more to French cuisine than croissants and pain au chocolat.

Of course, pastries are delicious, and so we will be exploring these in more detail, but we also want to pay homage to some of the most delicious French breakfast food items that are perhaps lesser known!

So, if you are heading to France and are wondering what breakfast food will be on offer, or if you are interested in creating an authentic typical French breakfast buffet at home, this is the post for you! 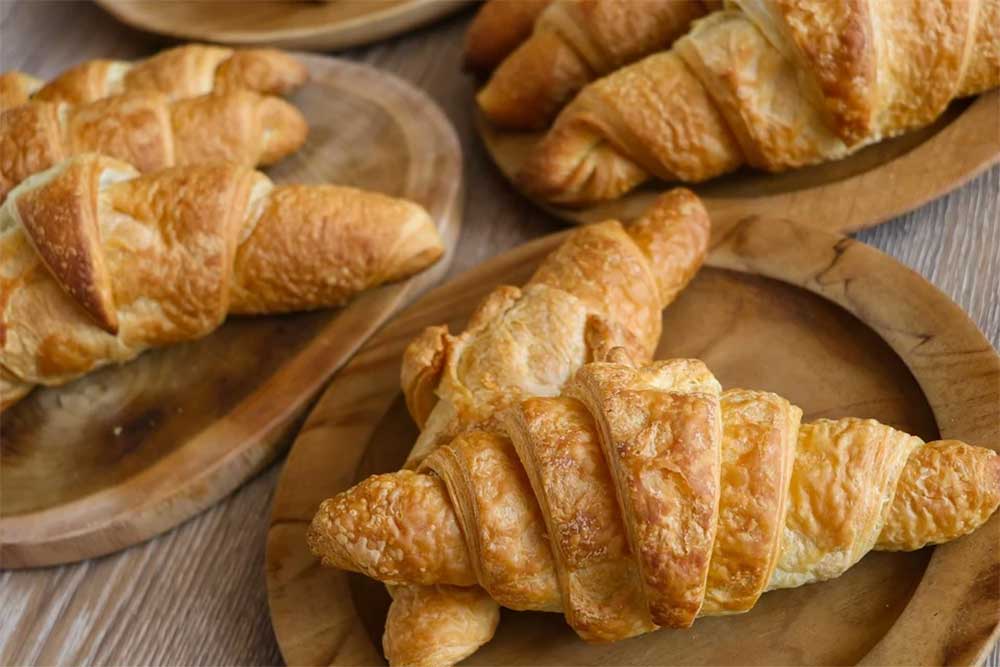 As we have already mentioned croissants play an important role in the breakfast meals eaten in France. They are super easy to grab and go, meaning you can eat them on your commute.

They can also be enjoyed at a more leisurely place with butter, jam, and honey alongside a hot cup of coffee (perhaps a cafe au lait). You may also find them used as a base for sandwiches, with many people using them instead of bread for Croque Madame (ham and cheese toasted sandwiches).

Just like the humble croissant, pain au chocolat is yet another popular pastry food that is enjoyed at breakfast time in France. The French name for breakfast is le petit dejeuner which loosely translates to ‘the small lunch’.

This tells us that the French tend to prefer small meals, and so a pain au chocolat alongside an orange or grapefruit (and of course, their vital cup of coffee) will usually be more than enough for them. We can certainly get behind this, too, since we think anything that includes chocolate is the perfect breakfast food!

Perhaps not as popular as its chocolatey cousin, pain aux raisins is still a delicious breakfast food that we think deserves much more love! Certainly in France, they are often enjoyed for breakfast, especially by those who aren’t too keen on chocolate that early in the day.

They are delicious little buns of pastry joy, and we love the fact that they are bejeweled with raisins. They are best enjoyed when picked up early in the morning from a French bakery. Ask for something fresh out of the oven to be truly impressed. 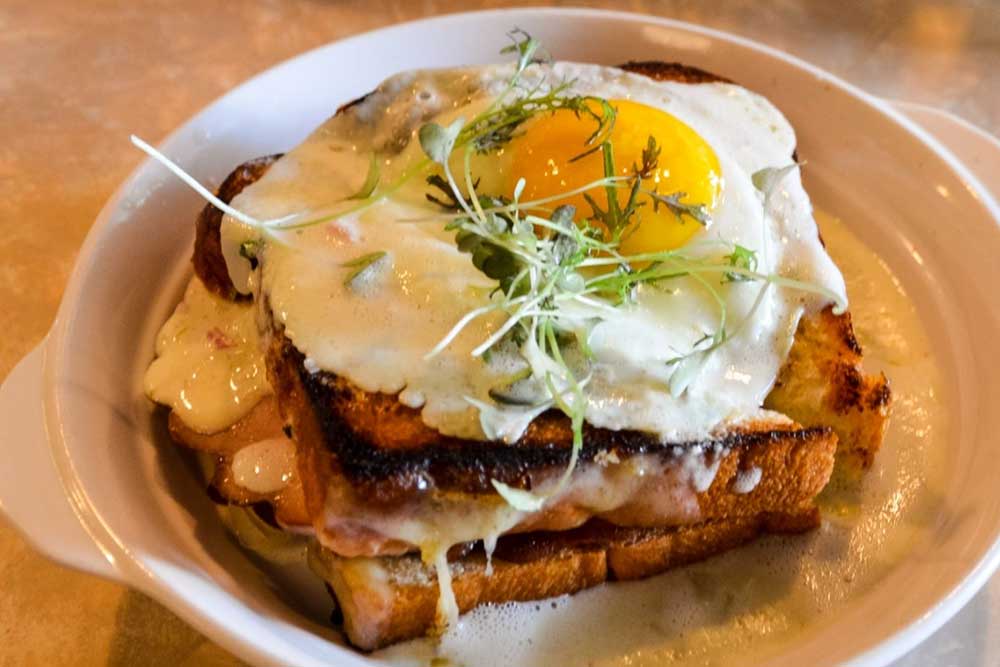 Croque Madame is a toasted sandwich...but better! It is jam-packed with thick, delicious ham, and creamy melted cheese. What makes it so special, we hear you ask?

Well, that would be the additional dollop of mustard that is carefully spread on the inside of each slice of bread before it is cooked. We promise you, you will adore this, plus it will keep you full until lunchtime! Or better yet, make double the portion to save for lunchtime too.

French Toast, whilst it is commonly associated with American breakfasts, is, of course, derived from France (I mean, we hope you’d have guessed that from the name…). French Toast is based on the traditional French breakfast that was made using stale bread.

This is known as pain perdu which translates to ‘lost bread’. This dish is so-called because back when food was hard to come by in France, nothing would be wasted, even if it was stale. Old bread would be dipped into milk and egg and then fried to bring some life back into it. Add cinnamon sugar and melted butter.

These little balls of fried dough are very similar in appearance, texture, and taste to our beloved donuts, but they are in smaller bite-sized pieces and just feel as light as a feather to eat!

They are dusted with powdered sugar and are super sweet. Perfect for a mid-morning pick me up with a cafe au lait, or when eaten with fruit and yogurt for an extra special breakfast. 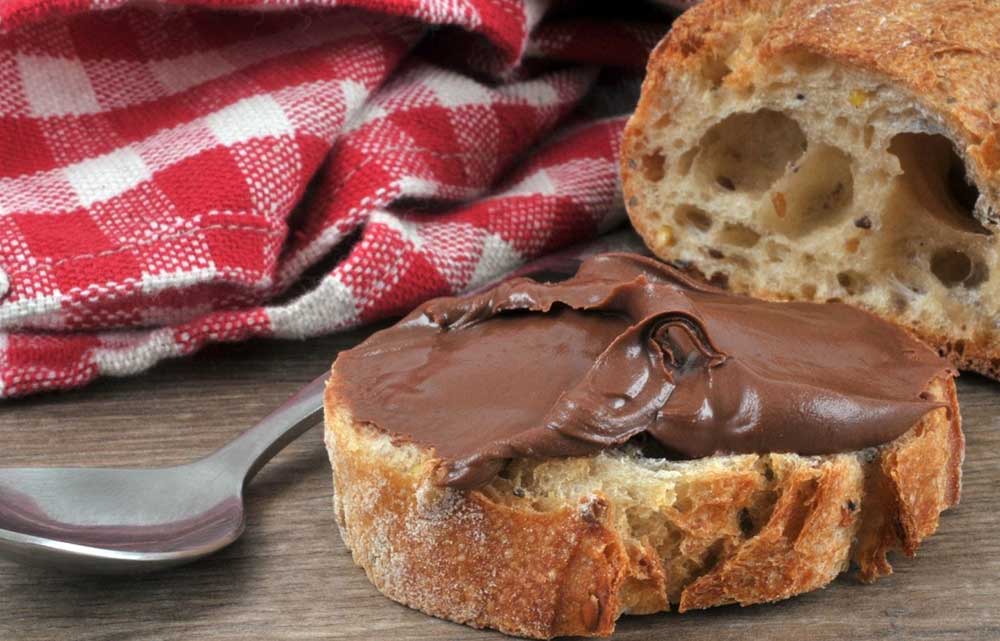 La tartine is pretty difficult to define, but basically, it is a term used to describe toasted bread. But, it is toasted bread that is unlike the toast you are used to eating! In France, la tartine refers to baguettes that have been cut in half and then sliced right through to make two slimmer pieces.

These then get toasted and are served warm with a choice of butter, jams, jellies, and preserves. You may also find different flavors of marmalade, as well as chocolate spread, and even cheese (although cheese is less of a French tradition when it comes to breakfast and more likely to be catered towards non-native tourists).

As it turns out, cereal is kind of a universal breakfast food favorite. Whilst they may not have the same ultra sugary cereals as we do in the States, there are certainly some wonderful options in France, for both kids and adults.

Whilst adults are more likely to choose some hearty oatmeal or Muesli, you may find kids reaching for Chocapic (these are similar to Cocoa Krispies), Miel Pops(Similar to the US corn pop), Cini Minis (these are just like Cinnamon Toast Crunch, and a number of other French versions of popular Kelloggs and Nestle cereals.

Of course, they also have the classics such as Cornflakes, and Special K.

I mean, is it any surprise to find that fruit is one of the most popular breakfast foods in France? It seems boring, I know, but it is still super important to mention it, since it features in many of the already mentioned breakfast foods, too.

For example, it is common to find berries and other fruits served with pastries, french toast, and cereals, with many French people choosing a piece of fruit alongside some cereal to keep them full all day.

They eat the same fruit in France as we do, so you can expect to find strawberries, raspberries, blueberries, citrus fruits, bananas, and melon among others.

Yes, radishes! As odd as it sounds, this is a very popular French breakfast dish that is enjoyed all around the country.

They toast slabs of delicious bread, slather it in salted butter, and then add fresh, crisp, raw radishes! It is a healthy breakfast full of antioxidants and it is very tasty. Don’t knock it until you’ve tried it...it’s not for everyone but it’s worth a try! 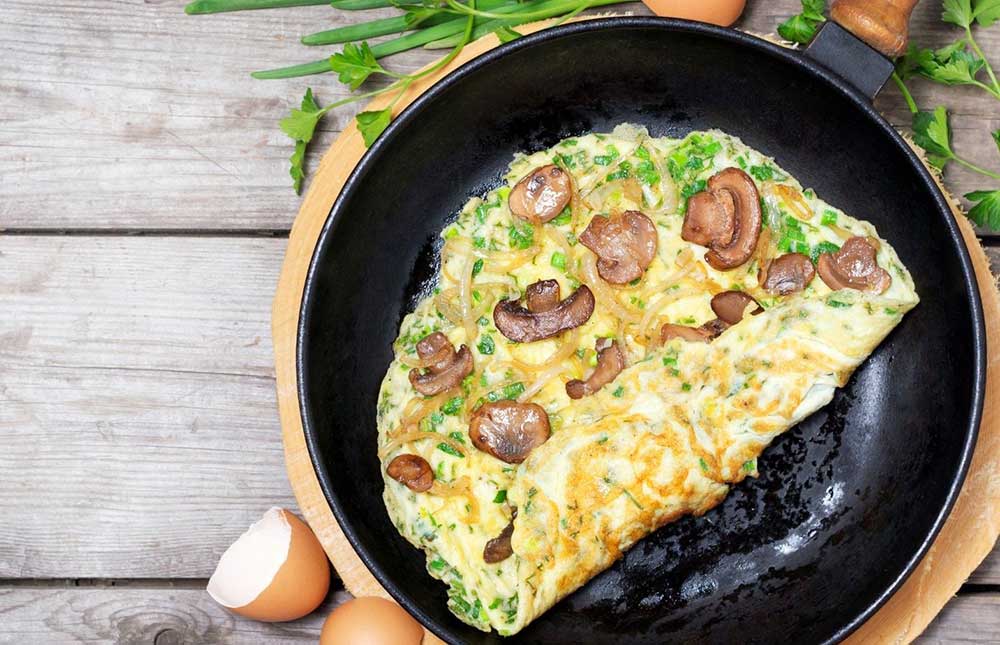 A true French omelet is a dish that is enjoyed all over the country of France. They are super simple, easy to make, and require little to no preparation and cooking time. All you need are eggs and butter!

This means they can easily be topped with your favorite fillings (either hot or cold), and are super versatile. Traditionally, they get rolled up into a neat little oblong shape and are often served alongside some steamed spinach and la tartine (toast) or some fresh baguette.

So, it seems that coffee is just as much of a staple in France as it is here in the United States. Whilst you will likely find all types of coffee in coffee shops and cafes in France, the traditional coffee that is enjoyed at breakfast time is the cafe au lait.

This translates to coffee with milk and consists of drip coffee (not usually espresso) and steamed milk. The true way of serving it is with equal parts milk and coffee, but this is not a hard and fast rule. You can drink it with or without sweetener.

These are one of the sweetest items on our list of French breakfast foods. These sweet and tasty pastry puffs are very similar to a sugar muffin. They tend to be flavored with cinnamon and nutmeg and the consistency is similar to that of a crumble.

They are light and luxurious all at the same time and are best enjoyed fresh from the oven, especially when eaten al fresco in the sun with a cup of coffee. 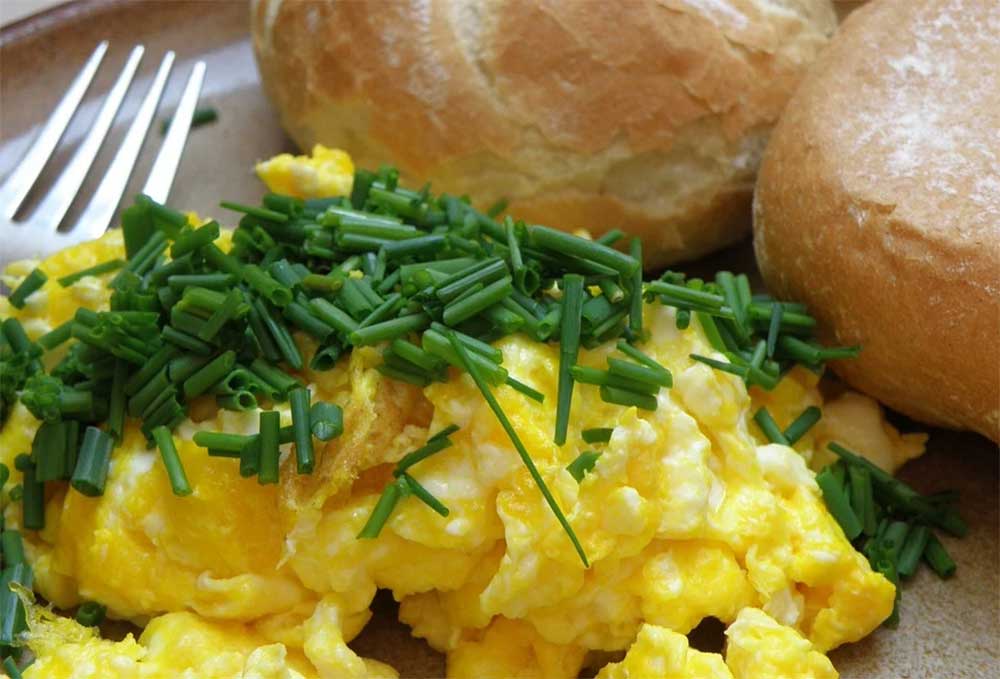 Scrambled eggs are yet another breakfast food that is loved worldwide, and France is certainly no different. In France, you can expect your scrambled eggs to have a much smoother, almost liquid-like consistency.

This is thanks to the butter and cream that is used to cook them. They are carefully created to ensure a perfect texture each time. They are served with soft, freshly buttered baguettes and often topped with chives.