Do you love eating crunchy and refreshing salads? If your answer is yes, then Japanese cucumber salad is perfect. The combination of flavors in this salad is so exquisite that it will leave your taste buds craving for more.

Preparing a homemade Japanese cucumber salad does not have to be difficult. It’s quite easy with the right preparation and ingredients. Its simplicity makes it great — no tricky ingredients or complicated steps are involved.

If you’re looking for a quick and easy meal to satisfy a yearning for something fresh and light, this is it. You can serve this as a side dish, appetizer, or even an unusual salad option at your next picnic or barbecue. This Japanese cucumber salad recipe is so easy that even new cooks will have no trouble whipping it up on short notice. Let’s see how you can make this simple dish at home with these simple steps.

What Is Sunomono Salad?

The salad dish is very easy to prepare and has a super refreshing taste. It is made by cutting up a cucumber into small pieces and mixing it with vinegar, sugar, and salt. Sunomono salad is often served as a side dish with rice or a topping on hotpot dishes. It is also a popular accompaniment to bento boxes packed for lunch or snacks.

This Japanese cucumber salad sunomono is made with a variety of long, slim, and relatively firm cucumbers. These cucumbers can be either the English or the Japanese type. You can eat the salad right away, or it can be stored in an airtight container for about 4 hours for better taste.

What Type of Cucumber Should You Use

Avoid using the typical huge cucumbers you can find at most stores for this recipe. Those cucumbers are overly big, have thick skin, a lot of seeds, and aren’t crisp. Read on to learn the perfect type of cucumbers to make a cucumber sunomono recipe.

Additionally, cucumbers have a less bitter flavor than other cultivars, making them more enjoyable to consume.

Persian cucumbers are smaller than green or common, with a distinct flavor and texture. These cucumbers have a crisp, crunchy texture and a mild yet distinct flavor. They are usually seedless but may occasionally have small seeds in them.

Persian cucumbers are mild with a crisp, crunchy texture that can be used as an ingredient in salads, sandwiches, and dips. They are smaller than the common cucumber varieties and have a distinctive taste complementary to many dishes when added at the right time.

The skin of the Persian cucumber is thin and tender, so they do not require much peeling time compared to emerald or English cucumbers, which need to be peeled quite a bit before use.

English cucumbers, or some people may also call them hot house cucumbers, have a mild flavor and are crisp, crunchy, and less watery than most other cucumbers. They are small, 5–7 inches long, and less than 1 inch in diameter when fully grown, with dark green skin. The seeds are difficult to remove from the flesh as they are small and tightly packed together.

Hothouse cucumbers tend to be smaller than standard cucumbers, with skin that is a darker green color than their standard counterparts. They tend to ripen over a longer period and have fewer seeds on the outside of the fruit.

How to Slice the Cucumber for Japanese Cucumber Salad

For this recipe, you’ll want to slice the cucumber very thinly — about 1/8th of an inch. You can slice it with a knife (a chef’s knife works best for slicing), a mandolin slicer, or even a vegetable peeler.

You can slice them up quickly if you have a mandolin slicer and some cut-resistant gloves. This requires a glove and an additional tool, but it’s completely worth it if you create a larger amount. The cucumbers made with the mandolin slicer also look beautiful since they are all consistent.

These cucumbers can be sliced with a knife, but it takes some experience to cut 200 of anything to the same thickness. Of course, using a knife to cut it manually is effective. Just make sure your knife is sharp so the slices stay narrow. Or if you’ve got a straightforward box grater, you can use it too!

When it comes to time-saving, this tool is the way to go! If yours has a feed tube and a thin slicer attachment, you can probably slice eight cucumbers for this salad in less than a minute. To do this, place the cucumber in the food processor, and pulse until they’re as thin as desired.

You can make this Japanese cucumber salad with vinegar, but mild-flavored rice vinegar or rice wine vinegar works best. Rice vinegar adds a unique depth of flavor to this dish, making it stand out from other salads. Mix rice wine vinegar with water first to create an even mixture of vinegar and water before adding it to your salad bowl. This way, you’ll be able to adjust the amount of liquid before adding it to your salad so that you can control how much salt or sugar you add separately from there onwards.

Cucumber releases a significant amount of water when mixed with other ingredients. Just add a little sea salt to some cucumber slices to stop this. Squeeze out the water after lightly rubbing it through the cucumber slices. The term “shiomomi” refers to this method of Japanese cooking. It works wonders for draining extra water from veggies like cucumber. While still crisp, the texture gets milder and softer.

Make a Double Batch, One for Today’s Supper and the Other for Tomorrow’s!

When you need it again, doubling up is considerably simpler than starting from scratch. You’ll be pleased you took action:). If you’re going to serve the cucumber salad later, set the dressing out separately. Add the dressing and toasted sesame seeds to your Japanese cucumber salad when ready to serve it.

Add a small diced onion to this salad for extra flavor and texture to your Japanese cucumber salad. Scallions are another great option, like red onion or shallot. You can also add a small amount of chopped seaweed to this salad if you’d like. Or, you can use a combination of kelp or nori sheets or a condiment like furikake.

Additionally, you can add layers of wakame seaweed or toasted sesame seeds for the sweet version. You can find Wakame seaweed in Japanese grocery stores, while sesame seeds can be purchased online or at Asian supermarkets.

These additions are an easy way to add variety and complexity to your simple cucumber salad. If you prefer a spicy version of this dish, add red pepper flakes for extra flavor.

Sunomono is usually served with a vinegar-based dressing, but there are many variations—this is a very flexible recipe! We recommend using a dash of rice vinegar, which gives the salad a light, slightly sweet flavor and dark color that goes well with the green of the cucumber.

You can use canola, vegetable, or toasted sesame oil for the oil part of the dressing. You can also use a combination of oils, using half canola and half vegetable oil. For the other ingredients, you can use soy sauce, rice vinegar, sugar, and a small number of sesame seeds. Make sure to whisk the dressing until it’s blended and evenly distributed.

People usually serve Japanese cucumber salad as a side dish or a garnish, so it’s important to remember when deciding how to present this salad. You can serve this cucumber salad in small bowls or plates alongside other Asian-inspired dishes like grilled fish, chicken, or tofu. It can also be served as an appetizer with other small finger foods like edamame and spring rolls. It may be made ahead of time and stored in the fridge for up to a week, making it convenient if you have a hectic schedule throughout the week.

Japanese cucumbers do not require peeling since their skins are quite thin and have a mild to sweet flavor. You don’t need to peel the entire thing because it looks, tastes, and feels nice as is, but if you want to add some creative flair by displaying the whiter inside of the cucumber, you can partially remove the skin to form a striped pattern.

Cucumbers are sensitive to ethylene gas, which is produced by many common fruits and vegetables, including apples, peaches, and tomatoes. They will ripen faster if you store them in a produce drawer or plastic bags with these fruits and vegetables. Wrap the unwashed cucumbers in paper towels and store them in a plastic bag in the refrigerator to slow the ripening process. Cucumbers will keep for about one week if stored this way.

It’s nice to have some fresh garden cucumbers around for a simple salad, but keeping them from getting soggy can also be challenging.

The best way to keep cucumber salad from getting soggy is to salt the cucumbers before adding them to the salad. This will help to draw out the moisture from the cucumbers and prevent them from making the salad soggy. And don’t let them sit in the fridge for too long. If you need to keep them longer than usual, try wrapping them in a paper towel or gently pressing them down with a plate to stay crisp.

Another cause of sogginess is over-mixing your salad ingredients. Adding cucumber to other ingredients, such as onions or tomatoes, immediately absorbs moisture from the other ingredients. So when you mix everything, the whole salad ends up being wetter than it already was. 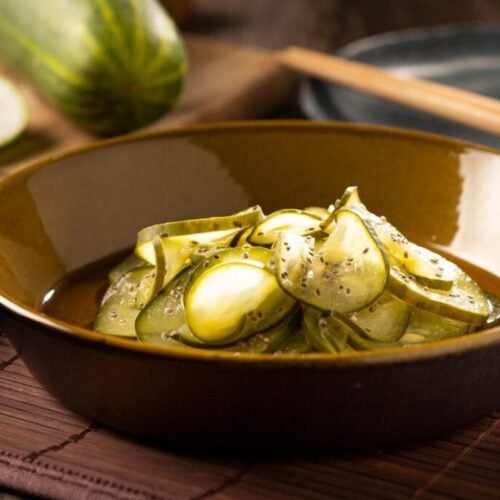 Cucumber sunomono salads are light, simple, delicious, and super refreshing. It has a great crunch and a pleasant, subtle vinegar flavor. They are made with thinly sliced cucumbers, seasoned with vinegar, salt, and a tiny bit of sugar. Actually, you can add any of your favorite ingredients, such as sesame seeds or sesame oil, to your cucumber salad.