Skip to content
Contents show
What are the origins of this dish?
What are the basic ingredients?
What seasoning can be used?
In what order should you cook the main ingredients?
How do you make Cajun seasoning from scratch?
Creamy Cajun Shrimp Pasta with Sausage
Ingredients 1x2x3x
Instructions
Nutrition
Related Posts:

In the mood for creamy cajun shrimp pasta with sausage? It’s your lucky day!

The world has fallen in love with Cajun flavors, and Cajun seasoning, blackened seasoning, cayenne pepper, and Creole seasoning add tons of flavor to most dishes. Spice mixtures such as Tony Chachere’s or Slap Yo Mama (that name…) have become pantry staples in many people’s spice cabinets. What’s not to love? All of these spices bring so much flavor to recipes.

Fresh fettuccine pasta, cajun drenched shrimp, and tantalizingly tasty sausages; each ingredient compliments the next to create a delicious dish that will hit the spot.

Just add some blackened seasoning, creole seasoning, cayenne pepper, red pepper to our Cajun Shrimp Pasta Recipe and you’ll have a winner. You can also try blackened shrimp pasta too.

It’s a great main course for dinner parties, easy enough to prepare throughout the week, and is a hit with all ages.

The best part? Our recipe won’t take you hours to create and requires ingredients that you likely already have laying around your kitchen. How’s that for convenience?

Below, we have shared our tried and true creamy cajun shrimp pasta with sausage recipe, as well as running you through some important cooking information to make sure you know everything there is to know about this much-loved meal.

So, whether you’re a budding chef or simply love getting creative in the kitchen, this recipe guide will make sure you cook up creamy cajun shrimp pasta with sausage like a pro. Let’s jump right in!

What are the origins of this dish?

Interestingly enough, there’s isn’t a clear-cut answer, because the dish takes influences from multiple types of cuisine. For instance, the cajun shrimp is inspired by Cajun cuisine, which is known for being spicy and hearty.

It’s a specific style of cooking that was developed in South America after Acadian immigrants fled from Canada back in the 19th century.

Cajun cuisine draws on inspiration from rural French cooking and was initially developed by a community of people that primarily lived off the land.

Similarly, the fettuccine pasta originates from Italian cuisine (entirely optional, you can use other kinds of pasta if you like) and was invented by Alfredo di Lelio in the 18th century, when he worked with his mother in a restaurant situated in Piazza Rosa.

As for the shrimp? Well, shrimp is simply a seafood ingredient that is used frequently across multiple cuisines. Most notably, shrimp is used in Italian, Asian, British, French, Spanish, and American cuisine.

Fun Fact: In Britain and Australia, shrimp are referred to as prawns or king prawns, depending on the size!

What are the basic ingredients?

Though we’re going to be supplying you with a specific recipe (which you’ll find at the bottom of this guide) we think it’s a good idea to share some of the ingredients that form the basis of this tasty dish.

These ingredients are traditionally used in this recipe, however, each ingredient we’re going to list is entirely optional, so feel free to use this section for inspirational purposes only.

What seasoning can be used?

When it comes to this dish, you can use just about any type of seasoning you like!

However, if you’re interested in learning more about the traditional seasoning used to prepare creamy cajun shrimp with pasta, they are as follows:

Additionally, you can also use a few drops of lemon juice to help enhance the flavor, while flour can help to thicken the sauce. For extra vibrant flavor, you could even drop a few chili flakes into the sauce for a fiery kick.

If you plan on purchasing premade cajun seasoning, we suggest checking the sodium content on the packaging before purchasing, because it is very common for cajun seasoning brands to put a large dose of salt in their mixtures – just something to keep in mind.

In what order should you cook the main ingredients?

Then, you’ll want to re-prepare the skillet and cook your sausages for around 5 minutes (or until they go golden brown). Last but not least, in a separate pan, bring salted water to a boil and then add the pasta until al dente.

How do you make Cajun seasoning from scratch?

If you have extra time on your hands and feel like making your own homemade Cajun seasoning rather than buying it pre-made, we think that you’ll be pleased to hear that it’s a very simple recipe.

You’ll need paprika, pepper, garlic powder, salt, paprika, cayenne, and oregano. Taking a bowl and a spoon, begin adding each type of seasoning to the bowl, either using a spoon to take measurements or simply eyeballing how much you think you need.

Once you have added your desired amount of seasoning to the bowl, take your spoon and gently mix them all together until the seasoning has become one big mixture.

Then, carefully transfer the mixture to a jar and then seal it with a lid. So long as you make sure to keep the Cajun mixture sealed in between uses, then you’ll be able to use the seasoning for up to one year before it begins to go bad and needs to be replaced.

Additionally, you can add other types of seasoning to make your own, individual blend of Cajun seasoning. Some other types that you can use are coriander, kosher salt, white pepper, chili flakes, and thyme.

Plus, besides this dish, you can use any leftover Cajun seasoning for other meals you cook throughout the week.

In particular, Cajun seasoning is delicious across the top of chicken, can be sprinkled over vegetables for a fiery kick, and even adds a little extra spice to potatoes. The possibilities are endless! 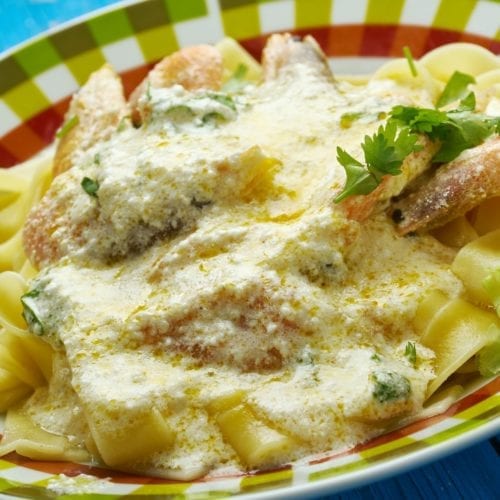