Skip to content
Contents show
Let’s Get Down to Basics
Choosing the Right Cut of Pork Chop
To Bone or Not to Bone Your Pork Chop
How to Sear Pork Chops – Achieving The Perfect Sear
Is the Pork Chop Cooked?
Final Thoughts
Easy Pan-Seared Pork Chops
Equipment
Ingredients 1x2x3x
Instructions
Nutrition
Related Posts:

Pan-seared pork chops can be difficult to perfect, but I’m here to help with a recipe and some step-by-step instructions that will walk you through how to achieve the most beautifully browned pork chops you’ll ever come across.

When they’re done right, these cutlets of meat can be tender, juicy, and just as delicious as a home-cooked steak dinner, but without the same level of effort and cost. Whether it’s a boneless pork chop, pan seared pork chop, or pan fried pork chop our pork chop recipe will deliver juicy pork chops time after time.

Serve alongside mashed potatoes, glazed carrots, steamed vegetables, or a crisp apple salad in the summer.

So, if you want to impress your family, friends, and future dinner guests, keep reading to see our favorite recipe for easy pan-seared pork chops, as well as some basic information that you need to know before getting started.

Let’s Get Down to Basics

There are quite a few things to think about when you’re planning on having pork chops for dinner, so I’ve compiled a list of some of the best tips and tricks I could come up with to help you with the basics of cooking these cuts of meat.

But before we go any further, what are pork chops exactly?

Found in the same area as the tenderloin, pork chops are taken from the loin (between the hips and shoulder) of the pig. There are a number of different cuts and each has a different name, but we’ll get into this properly in just a minute.

It can get a little confusing when you’re standing at the butcher counter but the names of the different types of cuts simply refer to the precise part of the pig from which they were cut.

For example, there’s the option to buy a center-cut loin chop or a rib chop. It’s not exactly difficult to guess where these two cuts came from!

Cooking the perfect meal starts with choosing the right ingredients.

This is especially true when it comes to certain meats as the differences between the types of cuts can hugely influence the quality of the end result and even the direction in which your dish is headed.

When it comes to pork chops, these are the three best type of cuts to choose from:

Boneless pork chops: Typically cut quite thick so they’re quite a substantial option and they’re very tender once cooked. Boneless pork chops are an ideal choice for searing which makes them perfect for this recipe.

Loin chops: Loin chops are a little bit leaner than your average center cut of pork which means they’re another good choice for this recipe.

Like with any meat, avoid using pork chops that appear to be out of date or moldy. You’ll know immediately if they are as pork that has gone bad before you get a chance to use it will emit a foul-smelling, sour odor and have a dullish color to its flesh. You’ll also notice a slimy texture and, obviously, if there’s any visible mold you should know straight away not to eat it.

To Bone or Not to Bone Your Pork Chop

You can buy pork chops with or without the bone and for this recipe, you can use either. However, there’s definitely something to be said for the added flavor the bone brings to the overall dish.

Without it, you can still achieve great results, but I can definitely notice a subtle difference between the two.

Choosing to go for boneless pork chops can also mean you end up with dry pork chops which is due to the fact that there is less fat.

You can try to work around this by brining the pork chops before you cook them in the pan but this does add an unnecessary step in the cooking process.

How to Sear Pork Chops – Achieving The Perfect Sear

It’s not as simple as just throwing your pork chops into the pan and hoping for the best.

There are actually a few things that you’ll need to get right if you want to have pork chops which are golden brown on the outside and juicy and tender inside.

The first thing you need to do is take your pork chops out of the fridge for a good 20 minutes or so before you actually plan on cooking them. This allows them to rest and come up to room temperature which helps to ensure even cooking throughout the cut of meat.

Seasoning is of course highly important, so be liberal with this on both sides of your pork chops to create a bit of a crust. Everything always tastes better with seasoning, remember.

When the pork chops are prepared, make sure that the skillet you’re using has been brushed lightly with oil as this will help prevent the pork from sticking to the pan. Cast-iron skillets are the best type of pan for the job as they help brown the pork chops evenly across the bottom.

Always make sure your skillet is hot before you place the pork chops inside. Allow the skillet to sit over medium heat for a few minutes before you’re ready to cook the chops as this will lead to the satisfying sizzling noise you should be looking for.

Try to avoid the temptation of lifting the pork chops to check how well they’re browning on the underside as this can affect the outcome of the sear. If you interrupt the browning then the pork chops could end up sticking to the pan which will tear the meat and ruin the sear.

Is the Pork Chop Cooked?

If you’re not already a professionally trained chef it can be difficult to know when your pork chops are done purely by sight and touch alone. It’s much easier to check when something is overdone: just look for charred or black edges or an obviously dry piece of meat.

Meat that is underdone is slightly trickier to spot as it’s the center that takes the longest to cook. Where it might look cooked on the outside, the inside could still be too pink at best or at the very worst, completely raw.

You’ll know your pork chops are ready if you give them a slight squeeze between your thumb and forefinger to see how much resistance there is to the pressure. You shouldn’t be able to create an indent too easily, but likewise, it shouldn’t feel tough or too solid to squeeze.

As we said, it’s not the easiest method for anyone who is making pork chops for the first time or if you’re less experienced in the kitchen. Luckily, there’s another way to tell if your pork chops are cooked or not, which is to use a meat thermometer.

This is a much more accurate way of knowing whether the meat is cooked. You should be looking for a temperature of 13°F and once the center has reached this then you can remove the pork chops from the heat to rest for 10 minutes which will finish off the cooking.

It’s worth noting that the cooking times will vary depending on the size and thickness of the pork chops you’re using.

A bigger pork chop will obviously take longer to cook, so if you only sear it in the pan for the same amount of time as you would with a smaller cut you’ll find that it might not be fully cooked all the way through.

I hope that you’ve found this article interesting and that you’re feeling more confident about how to perfectly sear your pork chops. If you follow our advice and the step-by-step instructions I’ve given you then you should have no problem whipping up this tasty dinner.

They’re a healthier option, easy to cook, and relatively quick as well as you can finish up in just 20 minutes. Well, that isn’t including the washing up, but the rule in my house is that she or he who cooks gets out of dish duties afterward.

So, forget about a fancy steak (which is more expensive and even harder to crack) and decide on pork chops for your next weekday dinner instead. You won’t regret it! If you’re feeling extra adventurous, add some balsamic vinegar or Dijon mustard to spice it up. 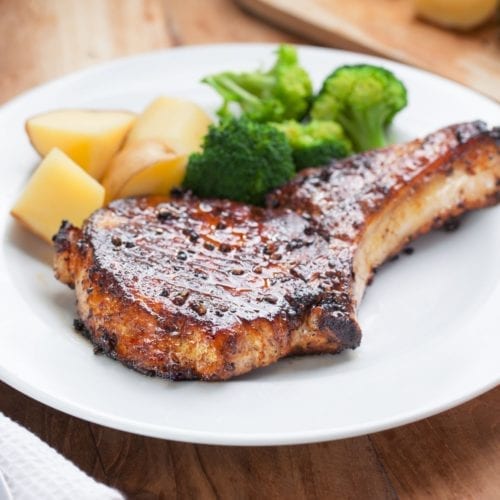