Our world is built on assumptions. Colors. Shades of things we think we know, but which, when examined more closely, are simply smoke and mirrors.

Contents show
Everyone happy? Everyone still sober?
Are the Brits the shortest shooters in the world, then?
Related Posts:

When it comes to how much alcohol you get in a shot, we’re sorry to tell you that everything you think you know is probably wrong – or at the very least, a lot more complicated than you ever dared imagine.

It's also important when dealing with coffee drinks like espresso. So the shot or espresso shot or double shot is just as important in your caffeine infused beverage as your favorite cocktail recipe. So keep your shot glass handy and pour your favorite alcoholic beverage as we learn how many ounces in a shot. 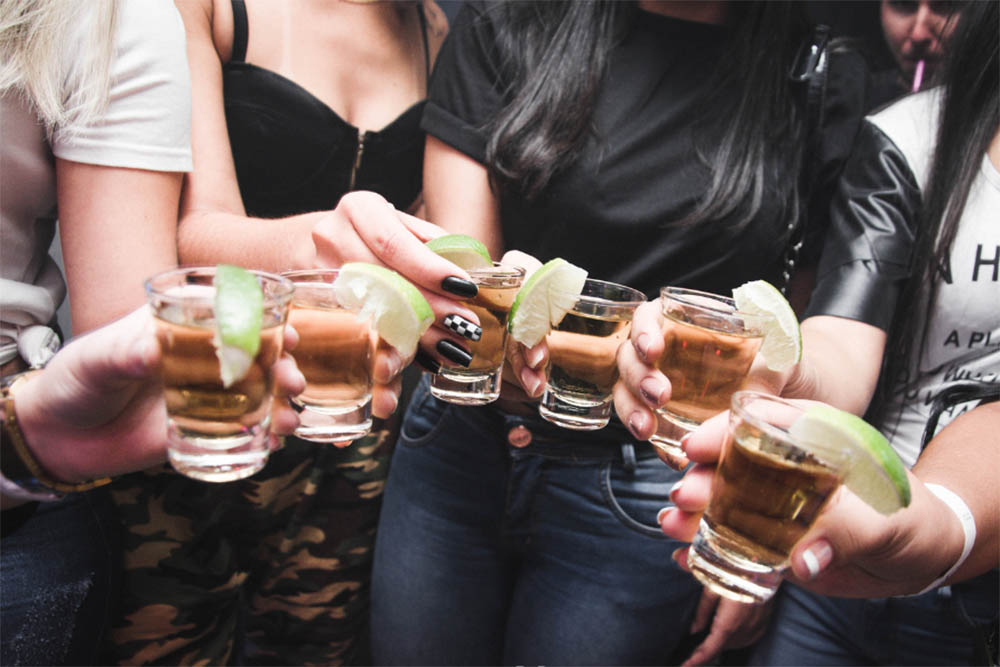 Here’s the thing. No one ever orders a shot of spirit by volume.

The reasons why nobody does that are complicated, but partly, it’s down to the fact that ‘a shot’ is up there with a pinch, a drizzle, a glug, a sprinkle, and other such terms.

They are individually self-defining. A shot or a drizzle to you might be disappointingly parsimonious to your neighbor, or wildly extravagant to your priest.

You’d also feel a bit of a heel going into a bar and ordering “a fluid ounce on the rocks,” wouldn’t you? But “Gimme a shot of the good stuff and no conversation” feels like it enhances the whole experience precisely because it’s a vague term.

In fact, it so spectacularly isn’t, it might sober you up.

There are two important things to remember about a shot.

Firstly, unlike things like a drizzle or a pinch, a shot is actually defined and measured by the serving glass in which it comes.

It’s a shot glass, and you know what that looks like – short, relatively narrow, and easy to fill.

This – and we can’t stress this point too highly – is not what happens in the real world.

And in fact, even the notion of a shot glass is surprisingly modern – it didn’t come into the public consciousness until after the Prohibition era.

But, just to mess with you a little further, people have been drinking ‘shots’ for over 300 years.

It’s one of those reverse-engineered things – the shot glass came about as a way of bringing at least some standard of expectation to the drink people had been taking all the while.

And secondly, the point about a shot is to… well, to shoot it. To drain it in a gulp. It’s a fast experience, however many times in a given night you repeat it.

You’re unlikely to notice much of a difference in the experience from bar to bar, state to state, or country to country.

But the amount of alcohol you actually get per shot can change by a surprising degree when you take one around the world.

Now, before you go running to your neighborhood bar demanding what in the Sam Hill they think they’re playing at, calm down.

In the U.S. there are two main types of shot glass, and yes, they are standardized – precisely to protect customers from getting short measures, and also to stop generous barkeeps from putting themselves out of business by over-pouring.

The “measuring shot glass” is more or less exactly what it sounds like – it’s a glass marked out with a whole variety of measurements – ounces, teaspoons, milliliters, tablespoons, etc. 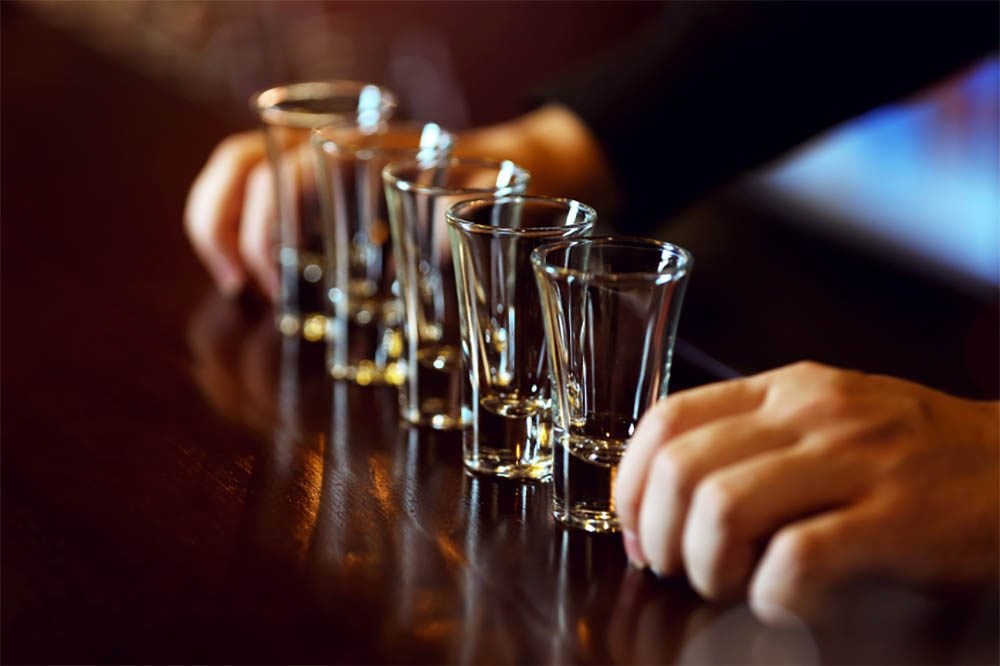 These measurements mean you can precisely replicate cocktails around the world, and also come in handy when you’re baking with liquids.

But the shot measure with which we’ll have most to do is called a “jigger.”

Let’s not get into why it’s called that – we’d love to tell you it’s because having a couple of jiggers makes you liable to dance a jig, but it exists in 16th-century English as a slang word for a door, so a jigger is just as likely to be a doorway to fun, frivolity – and potentially, oblivion.

From the early 19th-century though, the word was alive and kicking up its heels in the U.S. as the word for a small measure of drink, equal to roughly half a gill. Until Prohibition, this translated to 2 US fluid ounces (or 59 ml).

Somewhere between then and now, half a fluid ounce has been shaved away from the standard jigger, so these days a jigger is around 1.5 fluid ounces (or 44 ml).

It’s worth keeping this figure in mind as we go forward. If you have a shot that is just a single jigger, it’s more than likely you’re getting 1.5 fluid ounces of alcohol.

Except in Utah, naturally, where abstemious souls equate a jigger to just 1 fluid ounce (or 29.6 ml). Why? You should ask them next time you’re passing through.

There are alternatives though, because not every shot is served in a jigger.

You can get so-called “cheater” glasses. These look the part, and only by examining their bottom does the truth become apparent.

The bottom is thicker than a standard jigger-filling shot glass, so what you get in a cheater glass is actually just two-thirds of a standard single shot. The clue was in the name, really.

If you order a “tall shot,” you’re probably still getting a standard 1.5 fluid ounce single shot, just in a slightly different shape.

Meanwhile, never saddle up a “pony” glass – it only gives you about 1 fluid ounce of liquor, and is mostly used to add a standard amount of alcohol to mixed drinks. If you want a single-flavored drink, always go for a jigger measurement.

Everyone happy? Everyone still sober?

Good – you need to be sober to fly, and you need to fly to appreciate one simple fact: the alcohol content of a shot differs wiiiiiildly from country to country.

To explain and compare, we’re going to need your patience with a delve into the metric system. Because it’s the system in use across most of the world, that’s why.

That’s just 0.8 fluid ounces and 1.2 fluid ounces. So by any U.S. standard, the Brits are getting short measures – which is worth knowing if you ask for a shot over there, inasmuch as they’re not short-serving you because you’re American. They’re short-serving everyone.

Are the Brits the shortest shooters in the world, then?

No, not by any means. Somewhat absurdly given the prestigious history of beermaking over there, the shortest shots are found in Germany – just 20 ml in a single shot (though notably, they efficiently have only the one measure). That’s just 0.67 of a fluid ounce. Pack lots of Euro if you’re aiming to do shots to any particular effect in Germany.

In Australia, another country famous for both its beer and its wine heritage, shots get a slightly better deal – a single shot down under equates to 30 ml (Just over a Utah, in US terms).

In Greece, cradle of modern civilization, including European viniculture, they take their shots seriously – a single shot will get you 45 ml of alcohol, equivalent to 1.5 fluid ounces, the standard in most of the U.S.

Russians? Russians take their shots pretty seriously too, don’t they? They do – 50 ml of alcohol per single shot gives you 1.69 fluid ounces, just half a nose ahead of the U.S. There was a cold war, a space war, but who ever knew there was a shot war?

Well, now you do.

And where in the world are you getting the most alcohol for your shot?

Take your hat off, America – a standard single shot in Japan will get you 60 hardcore ml of alcohol. That’s just a whisper over 2 full fluid ounces of liquor in American terms.