Skip to content
Contents show
Where Did Eating Beets Originate?
Cooking Beets
Can You Steam Beets?
Can You Roast Beets?
What Are The Benefits Of Eating Beets?
What Recipes Are Beets Good For?
How To Cook Beets
Equipment
Ingredients 1x2x3x
Instructions
Nutrition
Related Posts:

Although they aren’t the most exciting vegetable in the world, many of us out there love a tasty purple treat in the form of a beet.

Roasting beets in the oven or making boiled beets in a slow cooker can be very rewarding if done correctly. Cooking beets can be easy. Make the raw beet or cooked beet your friend and find a way to add a fresh beet to your diet.

The red beet and golden beet are great in beet salad or simple sliced beets with lemon juice or balsamic vinegar. The best beet recipe I ever saw was a Julia Child recipe for oven roasted beets. I’ll share shortly.

Whether you’re a curious newcomer or a long time fan, today we’re going to talk about how to prepare and cook them.

Definitely a simple snack, they make a fantastic addition to any meal as a side with butter, or incorporated into a fresh salad for an extra layer of crunch and flavor.

Or, just give them a sprinkling of salt and a dash of oil and eat them as is!

If you need convincing about the potential health benefits of introducing more beets into your life (beyond your parents’ encouragement), we’ve also mentioned plenty of ways they contribute to a balanced, healthy diet and improving biological functions.

With our assistance, you can forget all about canned beets –  good food is all about eating fresh produce, so let’s get straight into it!

Where Did Eating Beets Originate?

Originally, beets were used in the Middle Ages as a form of medicine; attempting to treat a wide range of ailments, particularly those surrounding digestion, their bowel stimulating properties are famous worldwide and throughout history!

As a root vegetable, beets have been part of recipes for hundreds of years, first discoverable in Germany and Italy.

A key ingredient in European, Asian and Middle Eastern cooking, they are chock full of fiber, potassium, antioxidants and folic acid.

Most importantly, you can find plenty of betalains, a special antioxidant that is being waged in the war against cancer, given it’s a powerful liver cleanser.

Step One: Take your largest, deepest pot and fill it with fresh faucet water – then pop it on your stove and allow it to begin simmering

Step Two: As this is happening, begin your beet prep: you’re going to want to carefully remove the root found at the very bottom, as it’s not very tasty and contains very little nutritional value

Step Three: If you like, you could wash them first, but this step seems reductive when you’re about to throw them in hot water anyway!

Step Four: Once boiled and ready to go, turn your pot down slightly and gently plop your beets into the water – let them boil for 30 to 40 minutes, determining when to stop based on their size (larger beets take longer!)

Step Five: When they’re boiled and ready, very carefully transfer your beets onto a waiting plate, and allow them to cool for at least fifteen minutes before moving on

Step Six: Using your hands, delicately peel away the beet’s skin – this can go into your compost if you have one, or straight in the food waste, as there’s no point in saving it

Step Seven: Once fresh and skinless, chop and slice to your desired proportions – there’s no hard and fast rule here, so go wild!

Step Eight: If you don’t crunch then all up straight away, these beets can last for up to seven days in an airtight container that’s refrigerated, and there’s plenty of recipes that they could serve to jazz up!

Can You Steam Beets?

Though boiling is certainly preferable in our opinion, it is definitely possible to steam them; this does lead to a mushier texture, however. Steamed beets are not our favorite way to prepare them.

Pre-slice, then pop into your steamer basket and allow to cook for around fifteen or twenty minutes, or until soft.

Can You Roast Beets?

We would encourage you to – roasted beet is delicious!

Preheat your oven to around 375 degrees Fahrenheit and give them a little sprinkling of salt, pepper and olive oil, then pop them on a sheet tray and roast until lovely and tender. Add some goat cheese after removing from the oven if you like.

What Are The Benefits Of Eating Beets?

As we have already advised, beets are packed with vitamins, minerals and other healthy nutritional goodies.

Perhaps the most important of all is the nutrient Betaine, which is responsible for their notoriously red-purple color and plenty of goodness.

Also found in sweet potatoes, spinach, brown rice and quinoa, but available in abundance in these delicious purple veggies, betaine is widely recognized for its improvements to heart health and general digestive function.

As well as that, it is highly recommended for those with weaker immune systems, given it assists in liver function, aids in detoxification, helps the body gain muscle mass and could even promote fat loss over time.

It is also supposedly great at stopping the spread of germs, fungi and other nasty bacteria by preventing overproduction and ensuring the body’s natural acid supplies are stocked up and ready to fight.

What Recipes Are Beets Good For? 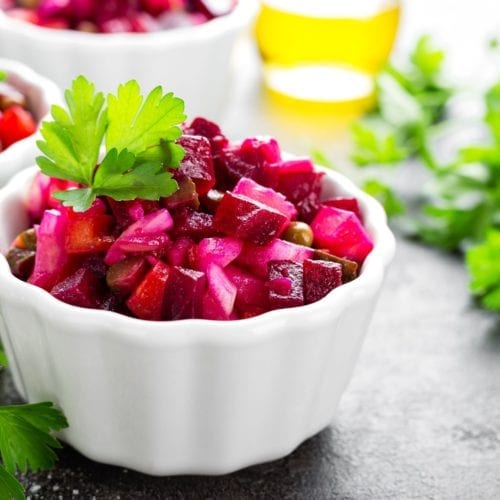 How To Cook Beets