We love hot dogs. In America, eating hot dogs is an important part of our culture, with a hot dog cart on every corner, people enjoying them at big games, or even grilling them in their backyard. Grilling hot dogs and sausage is a national past time.  Who doesn’t love a good grilled hot dog on a toasted bun.

Historians believe that the frankfurter was created in the German city of Frankfurt in 1487. This is before Christopher Columbus sailed to the continent of North America. However, the city of Vienna claims that they created this beloved American tradition and they point to the “weiner” as proof.

However, the most likely story is that the American hot dog as we know it today came from a different source. Hot dogs most likely started as a common European sausage that arrived in the U.S. when butchers of several different nationalities immigrated here. It may have been a German immigrant who sold the first hot dog.

Hot dogs are also served up for Fourth of July celebrations, at theme parks, and there are hot dog eating contests! As such an integral part of our culture, you will need to know how to make the best hot dogs.

Lucky, we have a guide of how to make our favorite fast food, in just 5 steps.

With our help, you can make hot dogs at home just like your favorite street vendor! Making hot dogs really is not that difficult, and can be done in just a few minutes, with results bursting with flavor and those hot dog juices that we all enjoy so much!  If you’re looking for how long to boil hot dogs, you’ve come to the right place. We might even show you how to cook your “hotdog” in an instant pot, slow cooker, air fryer, crock pot, frying pan, and grill. The perfect hot dog recipe is not far away. 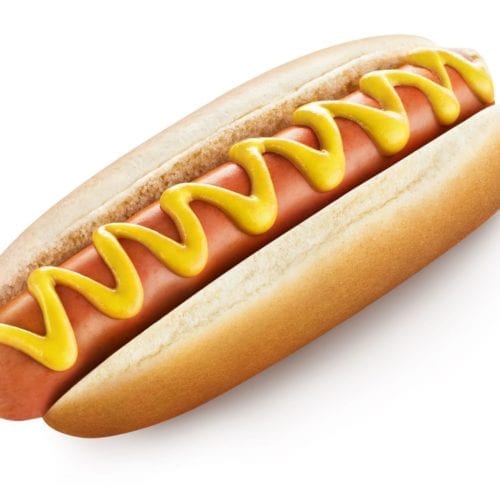 Easy Hot Dogs in under 5 minutes

How to boil delicious, American hot dogs in seconds! and How to make tasty, juicy hot dogs in the microwave in under 5 minutes! We have one final cooking method for you to try out; boiling the hot dogs in a small skillet. This method is a little different, but so simple and easy to follow.
4.89 from 89 votes
Print Recipe Pin Recipe
Cook Time 5 mins
Total Time 5 mins
Course Main Course
Cuisine American
Servings 4 people
Calories 210 kcal

How to boil hot dogs in the microwave

How to boil hot dogs in 5 easy steps

How to boil hot dogs in a skillet

When cooking hot dogs, some instructions will tell you to prick the sausages with a fork before cooking. We recommend that you do not do this as this can cause all of the juices to leak out when cooking, and you may be left with dry sausages, which nobody wants!

In addition, try to remember that these recipes are for ready to cook hot dog sausages, and so if you are using frozen hot dogs, you will need to allow for a little extra cooking time!

How can you tell when hotdogs are done boiling?

If you weren’t already aware, hotdogs are sold pre-cooked. However, eating a cold hotdog isn’t the best way to enjoy the dish. Boiling hotdogs is one of the best ways to quickly reheat your dogs and make them that extra bit tastier!

The perfect way to boil your hotdogs is to boil them for around six minutes. This is enough time for the hotdogs to cook to perfection and without splitting the dogs. If your hotdogs split when boiling, this could mean that you have lost some of that delicious flavor.

Depending on how many hotdogs you are boiling may mean that you need to adjust the boiling time. If you have only a few to boil, let’s say two to four hotdogs, then they could be ready to eat before the six minutes are up. However, if you have a large pack to boil, they could take a little longer.

How do you cook hotdogs on the stove?

We have spoken about boiling your hotdogs which is a fantastic way to quickly cook your hotdogs to perfection. However, there are other methods that you could try out. For example, pan-frying is another popular method.

Pan-frying your hotdogs allows the meat inside to cook thoroughly but adding a crispy outer layer to the hotdog. This type of cooking method is popular in many restaurants.

A top tip for this method is to only cook a few hotdogs at one time. This will allow you to get the best results. Also, add a touch of butter to your skillet for an extra flavor boost.

Are boiled hotdogs safe to eat?

As we have already touched on above, boiling hotdogs is completely safe. It is one of the quickest methods of reheating your hotdogs before consumption. Boiling hotdogs makes them almost irresistible to taste and they will be ready to eat within minutes.

One thing that is frowned upon is boiling your hotdogs before grilling or frying them. This method can get rid of all of their flavor. So, if you are thinking about cooking up some hotdogs only stick to one cooking method.

Boiling, grilling, and frying all are great ways to cook your hotdogs. Each method will produce different results. So, whatever way that you prefer your hotdog to taste, make sure the method you use matches!