Krispy Kreme is an American coffee house and donut chain company that is owned by JAB Holding Company.

The headquarters are situated in Winston-Salem in North Carolina, USA. They total 1,005 locations worldwide at the time of writing. 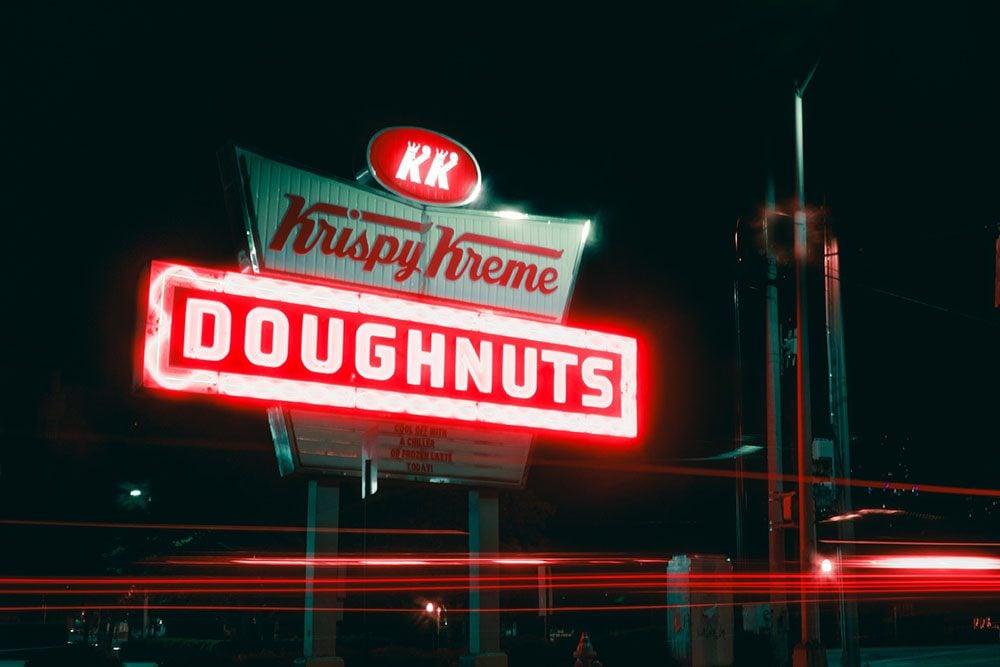 It was founded in 1937 on April 13th by Vernon Rudolph, who bought a yeast-based recipe off of a chef in New-Orleans, rented a building, and began selling to grocery stores.

They began expanding back in the 1990s and opened their first store outside of the United States in Ontario, Canada in 2001 and since then have grown into a worldwide known company, producing donuts and tasty drinks around the globe.

Krispy Kreme does not make vegan donuts in the USA.

Looking through all the ingredients on Krispy Kremes recipes for all donuts in the United States and it is clear that none of these are vegan as all contain dairy products such as milk or eggs.

However, there is promising news on the horizon. Krispy Kreme has just, in 2021, released their first ever vegan doughnut in the UK.

It is sold in a multipack and is titled the ‘Original Glazed Vegan Dozen’.

This, however, is unfortunately yet to make its way around the rest of the world.

You can assume that this UK only special donut is being trailed in a way, to see how it sells and if it is worth branching it out to other locations.

We have to hope that this donut sells really well in the UK and that it will soon be released in the United States and other locations on a worldwide scale.

So, They’re not Vegan… But Are They Vegetarian?

Krispy Kremes nutritional information states that while their donuts are not vegan they are in fact vegetarian.

As the only animal by-products they use are dairy-based, such as milk, eggs, butter, and so on.

What Ingredients Are Used In A Krispy Kreme Donut?

Krispy Kreme has many donuts available, in fact in the United States they sell 32 types of donuts and in their location, in Burbank, they can even make a donut Birthday cake.

But looking at ingredients, we will take a look at the ‘Original Glazed Donut’ and see what their ingredients are for that one, to get an idea of the average make up of a donut from Krispy Kreme as stated on their packaging. 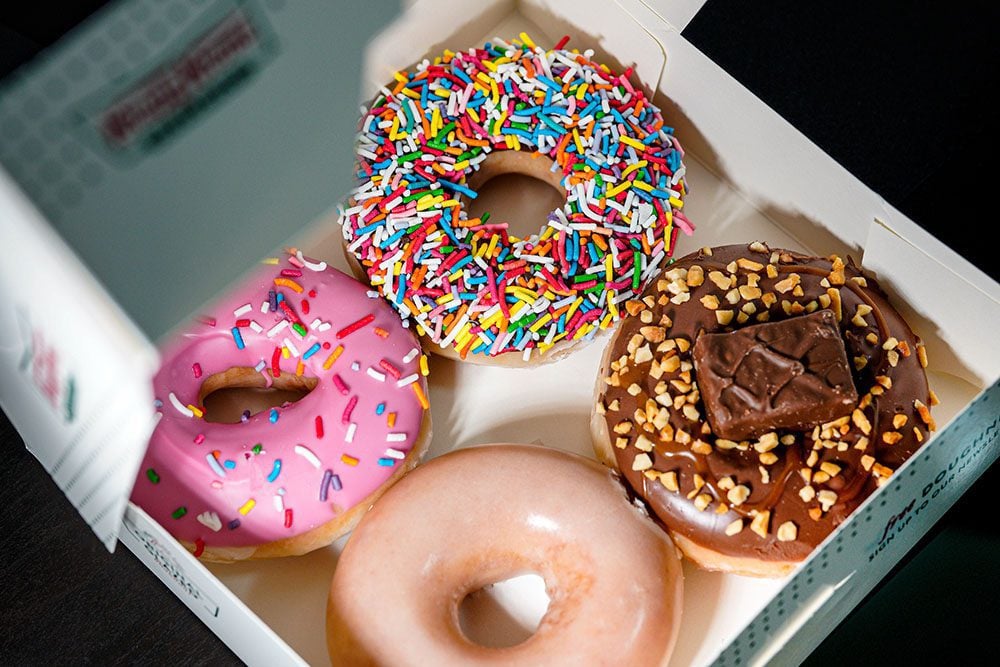 What Vegan Options Are There At Krispy Kreme?

Inside the United States, Krispy Kreme does not offer vegan donuts. However, there are vegan drinks and some other vegan options in other stores around the world.

Inside the USA the vegan options are;

The Krispy Kreme site also offers no mention of any plant-based milk alternatives being used in their hot or cold drinks.

Although some stores may offer alternatives to milk dairy products in drinks such as coffee. This is something that you will likely have to ask your local store, to discover if this is a service that they offer.

Outside the USA many international Krispy Kreme stores also sell bagels, but unfortunately, this is also a service not offered in the United States.

In the United Kingdom, Krispy Kreme offers Vegan donuts as of January 2021. However, there is still an ingredient or two that is disputed.

Like many vegan products and any snack food that could be considered a little bit naughty, all Krispy Kreme donuts are currently made with palm oil.

Palm oil does not contain any animal by-products but it is a topic of debate when it comes to environmental conservation.

Although Krispy Kreme does state that they are working with the RSPO to source their ingredients, in this specific case, more sustainably and economically, they do still use palm oil in the production of their donuts.

Why? Because palm oil is the main driver of the deforestation of many of the world’s most bio-diverse forests and has lead to homelessness and further danger of many species that are already endangered, much like the orangutan, the pygmy elephant, and the Sumatran rhino.

Palm oils are not so widely used in food cooking in the US, but they are used in food processing, usually found as an ingredient in bread, pastries, chocolates, many candies, cereals, and peanut butter.

Therefore, it is a personal decision whether or not to eat foods that contain palm oils.

Krispy Kreme does not source its supply directly from palm mills and plantations but they do work in tandem with companies such as the RSPO to responsibly source their supplies through RSPO certified segregation of supplies.

While the vegan donuts have not yet made their way to the United States, in the countries that they have and in their vegetarian foods (most if not all Krispy Kreme products are vegetarian).

It is wise to look out for cross-contamination if you are intolerant to milk or dairy.

Due to the way that their donuts, including the new international vegan donut, are made and their manufacturing methods there is a risk of cross-contamination in their foods.

Therefore their foods are not recommended for those who have egg or milk allergies, this may also be something to consider for vegans in the future should the vegan donut make it around the globe.

While Krispy Kreme does not yet sell its brand new vegan donut option in the USA, we hope it will soon make its way from the UK to the US.

In the meantime, if you fancy a vegan donut there are other options out there or you could even make your own.

Do keep in mind that should Krispy Kreme introduce their vegan option to the USA, that they do still use types of palm oil and there is a minor risk of cross-contamination.