Cheese is great. There really is no denying that. It’s insanely yummy, can be paired with pretty much anything, and comes in lots of different varieties. Today we’re talking about Muenster cheese.

Despite the fact that its name sounds like it should be German, Muenster cheese is actually proudly American. However, as you probably expect, this cheese is of German origin. It was brought over to the United States by Alsatian immigrants during the 19th Century, and has evolved from there into the Muenster cheese that we know and love today. 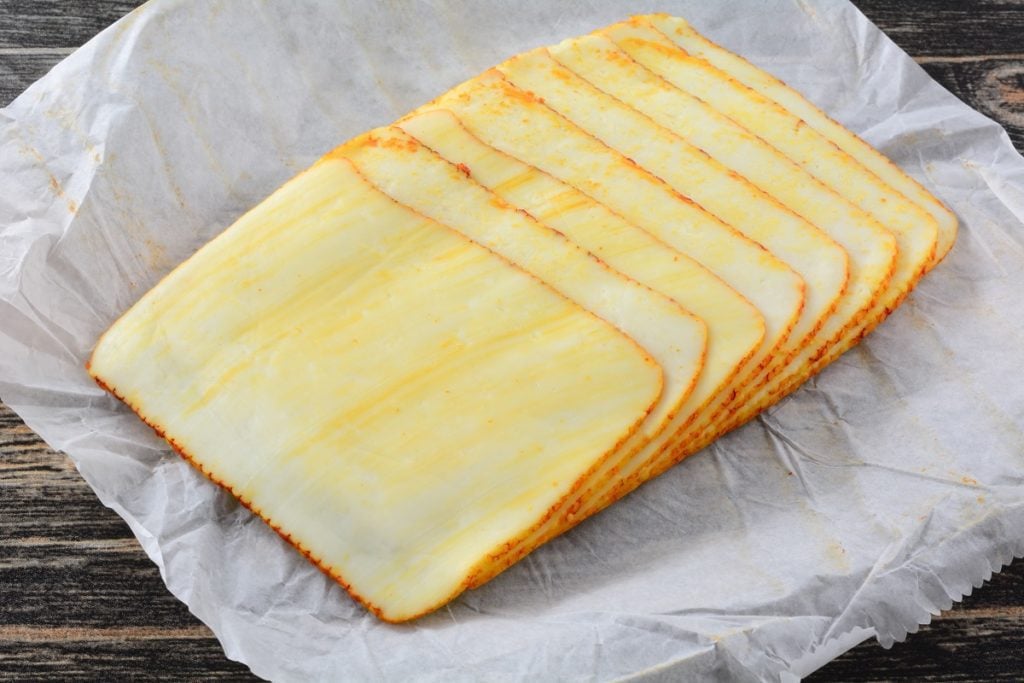 But while you love Muenster cheese, you might not actually know that much about this delicious delicacy. American Muenster cheese is one of the best loved cheeses in the USA. Not only among children, but also among adults too. I love it on a nice grilled cheese. Call me crazy but I still like a nice grilled cheese sandwich or tuna melts. That rich cheese taste is awesome.

So, if you want to find out more about this wonderful cheese, then you’re in the right place. To help you out, we’ve put together this comprehensive guide, all about Muenster cheese. So read on to find out more.

What is Muenster Cheese?

Well, as we have already established, Muenster cheese is, in fact, cheese. As we have said, American Muenster is one of the most popular cheeses in the USA, and this is mainly because it has excellent melting properties.

These excellent melting properties come from the fact that Muenster is a semi soft cheese. This texture often means that it is very light, almost white, in color. It is also partly caused by the fact that this cheese is quite buttery in taste, which is partly responsible for its softer texture. It's mild flavor is made with cow's milk.

If you are a cheese enthusiast, then you probably will have heard of the French cheese ‘Munster’, and wondered if there is any relationship between this and the American Muenster. In fact, there is, as American Muenster is essentially an imitation of French Munster.

This is because the French Munster was brought over to the USA by Alsatian Immigrants, but due to different cultures and environments, the aging process changed slightly. This is what has caused American Muenster to become an entirely different cheese from French Muenster.

Based on this, you might be puzzled by what we meant when we said earlier that Muenster cheese is of Germanic origin. But, the ‘Alsace’ region of France is found on the border of France and Germany, so throughout history ownership of this region has continually crossed hands. Hence, the Germanic name for this French cheese.

Seeing as we have already covered where Muenster cheese originated from, let’s take a look at how it is made. As you may expect, the production process for Muenster cheese is very similar to the manufacturing process for traditional Alsatian Munster cheese. However, different companies will produce this cheese slightly differently from one another.

To begin the production process, most cheesemakers begin with whole pasteurized cows milk, but a very small portion of cheese makers will use goats milk. Using large vats, the milk is then heated up to a temperature of 90 degrees Fahrenheit (32 degrees Celsius). At this temperature, the mesophilic lactic acid is activated, which will produce the enzyme that solidifies the milk and turns it into curds.

Once these curds have formed, workers cut them into 1 cm squares  and cook them briefly at a heat of 100 degrees Fahrenheit (38 °C). Once this is done, the curds are then ladled for shaping, and drained through the use of light pressure. Following this, the curds are aged through the use of high humidity in cold temperatures. The aging process can take anywhere between 3 weeks and 3 months depending on the size of the cheese. But, once this is done, you will have Muenster cheese that is ready to use.

While you may have heard of Muenster cheese, there is a good chance that you haven’t actually tasted it. Some people can find the orange exterior of this cheese is off-putting as it suggests that the cheese may be spicy, but in fact this isn’t the case.

Muenster cheese is actually very mellow. This is mainly because this type of cheese is generally used when it is quite young, so it doesn’t have as long to mature as some other, stronger cheeses. So, as long as this cheese is used fairly quickly after the aging process, then it generally has a mild taste. So it's different than swiss cheese, cream cheese, blue cheese, gouda, and provolone.

But, while it is mild, Muenster does have a salty kick to it. This is another reason why this cheese is great for melting, as it is seemingly already seasoned. It is earthy and rich, but in no way is it spicy. So don’t let the orange rind of this cheese put you off.

As we have already established, there are a few different variations of Muenster cheese. So, let’s take a quick look at what these are.

While it is nice to enjoy some cheese on its own, there is nothing better than pairing Muenster with other food and drinks that compliment its taste. Some people like to enjoy their cheese with a glass of wine, others would prefer a beer. So let’s take a look at some of the best things you can pair with Muenster cheese.

If you are a wine drinker, then you should pair your Muenster with a dry, or semi-dry, white wine. However, the mild taste of Muenster means that it is much nicer when paired with a dark beer such as brown ale or dark lager. In terms of food, Muenster tastes best when paired with fruit. Especially wet fruits, including grapes, pears, and apples, as the salty taste of the Muenster offsets the sweetness of the fruit perfectly.

In the USA, the manufacturing of Muenster cheese is a competitive industry. This means that there are lots of different brands that offer this type of cheese. To find the Muenster that you like best, we would recommend trying a few different brands.

In particular, these brands are great:

But, there are lots of other excellent brands which produce this type of cheese, and there are also a lot of smaller companies who produce it. So, it is best to do your research before you pick your favorite.

Where to Buy Muenster Cheese (and Substitutes)

You may be reading this and wondering ‘Where can I buy Muenster cheese?’. Its name suggests that it might be difficult to locate, however this isn’t really the case.

As we mentioned earlier, Muenster cheese is one of the most popular cheeses in the USA, and because of this it is very easily accessible. So, you will generally be able to find Muenster cheese in most grocery stores and delis, where it will usually be stored in the refrigerator section.

If you need Muenster cheese for a recipe, but can’t find any at your local grocery store, then there are some substitutes that you can use. These are not exactly the same as Muenster, but they do work well as a substitute. They include:

How long does Muenster Cheese last?

Some cheeses will have a very long shelf life when kept refrigerated. Unfortunately, Muenster cheese is not one of these. This is mainly because Muenster cheese is often sold in sliced form, so it is not as hardy as cheese sold in blocks.

If you have bought Muenster cheese in sliced form, then it will usually last for approximately 3 weeks when kept refrigerated. Some manufacturers might recommend using the cheese in a shorter period of time than this, especially once it has been opened. So, if you want to prolong the shelf life of your Muenster, it is best to avoid opening it until you absolutely need to.

As we mentioned earlier, block cheese generally has a longer shelf life. So, if your Muenster cheese is in a block, you should expect it to last for longer than 3 weeks.

How to tell if your Muenster has gone bad

Even though Muenster cheese should last for 3 weeks when it is sliced, there is a possibility that it will go bad before this. Especially if you have opened it and left it unused. It is fairly easy to spot Muenster that has gone bad as the slices will begin to crack around the edges, and the color of the cheese will become darker. If the cheese has gone very bad, you might even notice mold beginning to appear on the slices.

If your Muenster is in slices, and they have gone moldy, then you should throw them in the trash. However, if your Muenster is in a block, and you have simply observed some surface mold, then you can simply cut away the mold. In most cases, the cheese further inside the block will still be perfectly fine to eat. Simply repackage the cheese that is safe to eat in a new container, and enjoy within the next few days.

In short, this has been a comprehensive guide to Muenster cheese, including what it is, how it's made, and where to buy it. So, if you want to find out more about this yummy, all-American cheese, then you are in the right place.