We’ve been seeing that a lot of people are cooking air fryer bacon, but the secret to perfectly straight, crispy bacon is to bake it in the oven. Are you wondering how to cook bacon in the oven? We use two different baking methods that are easy to do, and you can use this step-by-step guide to get either crispy or chewy bacon strips. 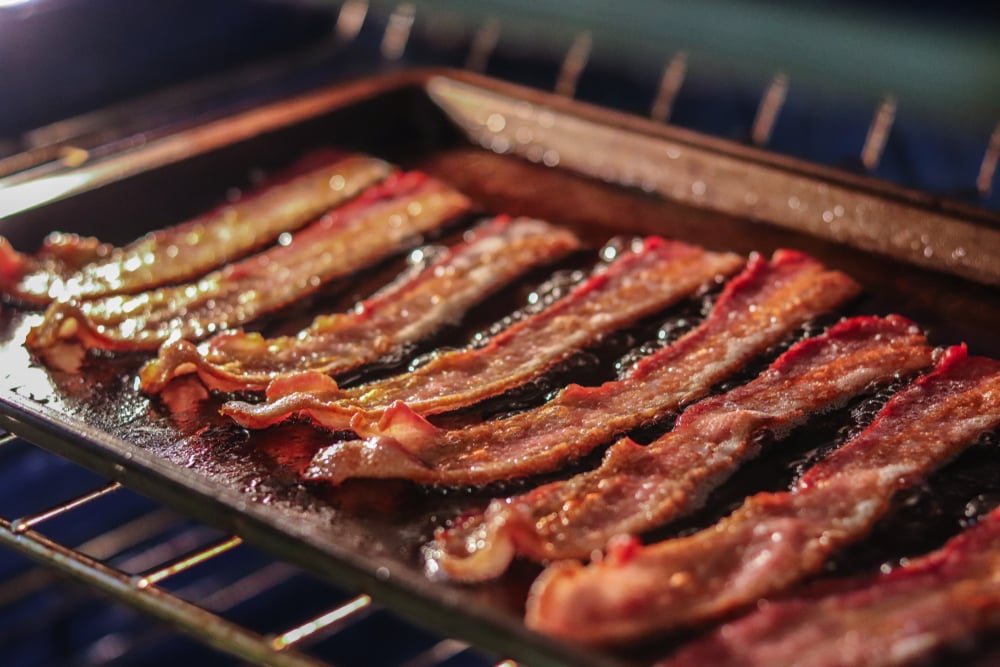 When you bake bacon, there are essentially two ways to cook it: on a wire rack or directly on a sheet pan. We’re going to share tips with you to get perfect bacon cooked in batches, so you’ve got enough baked bacon for a crowd, bacon for meal prepping, and even baked bacon to store in the fridge or freezer for future munching or recipes.

Bacon comes in a variety of different flavors, including applewood smoked bacon, hickory-smoked bacon, cured bacon, and uncured bacon. Bacon’s thickness affects the amount of time it takes for it to cook in the oven. For our cooking method, we recommend standard-cut bacon (regular bacon). Sometimes this is called classic cut, average, or regular. You can use heartier or thicker cuts, but you’ll need to adjust the cooking times accordingly. Turkey bacon is popular and yummy, but it’s not as well suited for baking in the oven.

To make oven bacon, you need to use a rimmed cookie sheet, sometimes called a rimmed baking sheet. When the bacon fat starts to render, it will start to pool at the pan’s bottom. If you don’t have pans with rims, you’ll create a huge mess that will require deep oven cleaning. We like to line our baking sheets with foil, specifically wider and heavy-duty thick aluminum foil that will fully cover the bottom of the pan and go up the sides.

You can also use parchment paper to cook bacon, but you’ll have more cleanup if you use this. We also recommend covering the pan, whether you use the rack cooking method or cook your bacon directly on the sheet pan.

Cooking Bacon on a Wire Rack vs. a Sheet Pan

How to Cook Bacon Directly on a Sheet Pan

Line your sheet pan with aluminum foil and make sure it covers the sides of the pan. Line the bacon strips in a single layer onto the foil-lined baking pan. Space the bacon apart evenly, and be careful not to allow it to overlap. If you overlap your bacon, it will still cook, but if you don’t overlap your bacon strips, the protein cooks more consistently and doesn’t cook together. Bake the bacon strips at 375 degrees Fahrenheit (191 degrees Celsius) for approximately 20 minutes. Flip the bacon just before the last 5 minutes of cooking time, and you’ll have evenly cooked bacon. 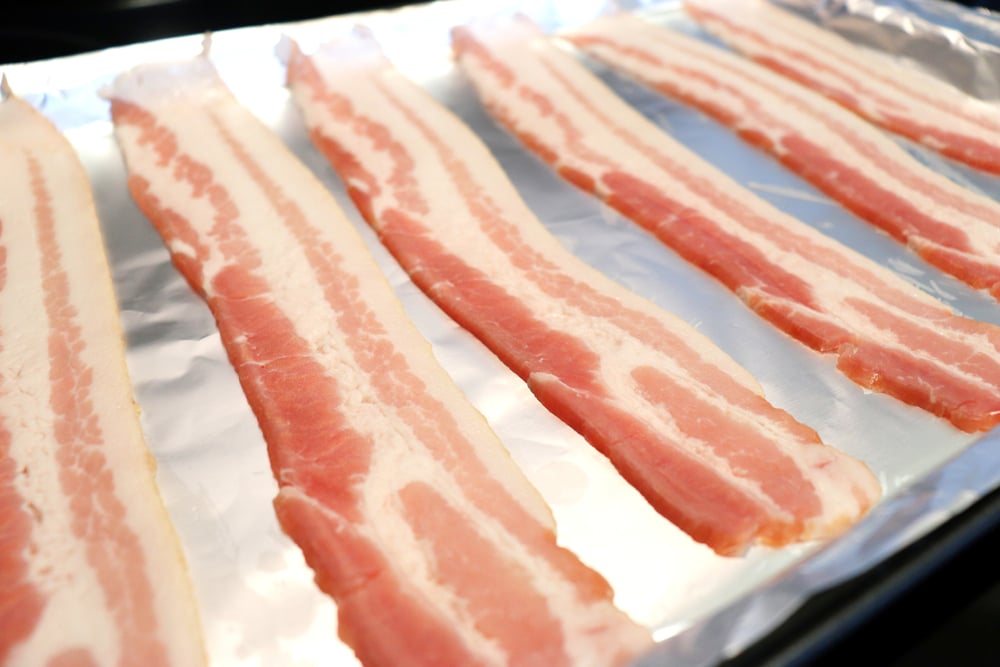 The surface will be glistening, and if you want chewy bacon, allow a small bit of fat to run through the meat. The more fat that gets rendered, the crispier the bacon will be. Watch your bacon closely during the last few minutes of cooking time because it takes just a couple of minutes for bacon to go from crispy to burned. When the bacon is cooked, transfer it to a plate that’s lined with paper towels so that the excess grease can drain.

How to Cook Bacon Using a Wire Rack

To make cleaning up much simpler, line your sheet pan with heavy-duty aluminum foil. Choose an oven-safe wire rack, not one with a non-stick coating that can break down in the oven. Carefully arrange the bacon strips atop the rack and space them apart evenly. Don’t allow the bacon to overlap. 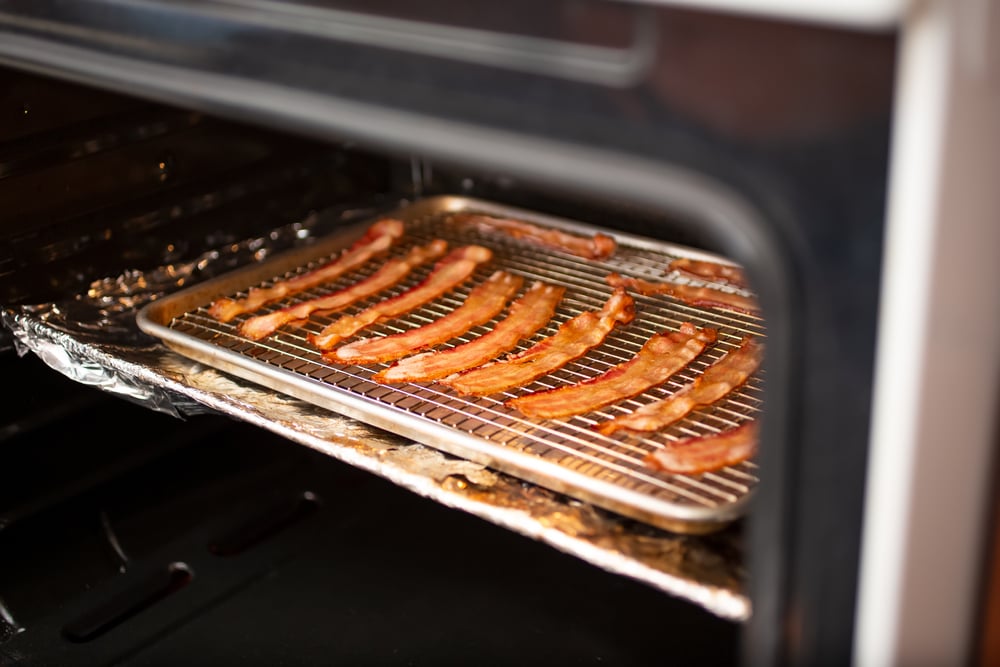 How Long to Cook Oven-Cooked Bacon

The cook time of your bacon will depend on how thick the bacon is, the oven’s temperature, and the cooking method you use. We like to bake our bacon at 375 degrees Fahrenheit (191 degrees Celsius) because this temperature renders the bacon fat gently, which results in even texture development and color. When the bacon’s surface reaches 300 degrees Fahrenheit (149 degrees Celsius), it starts to brown and becomes crispy because of Maillard browning.

If you’re not saving your bacon grease, you’re missing out! Bacon grease has tons of flavor, and it adds lots of richness to recipes, including sauteed green beans, fried eggs, braised kale, and more. You can also add a spoon of bacon grease to a pot of beans for a down-home flavor.

Leftover bacon grease has a smoke point that’s similar to lard, which is about 370 degrees Fahrenheit (188 degrees Celsius). Bacon grease should be used at temperatures that aren’t terribly high. To save your bacon grease, let the pan cool down a bit but don’t let the fat become solid. Strain the bacon grease through cheesecloth and a fine-mesh sieve into a bowl. Let it cool a bit, then put it into a canning jar or other airtight container. You can refrigerate bacon grease for as long as 3 months, and it will keep in the freezer indefinitely.

We love cooking up several packs of bacon at once, then storing the leftover bacon for later use. Put your baking bacon slices into an airtight container or resealable plastic bag for up to a week in the fridge. You can freeze cooked bacon, too, and pull it out and reheat it for a tasty treat. Your frozen bacon will keep for up to 3 months in the freezer. You can also crumble your bacon for use in recipes and freeze the bacon bits. 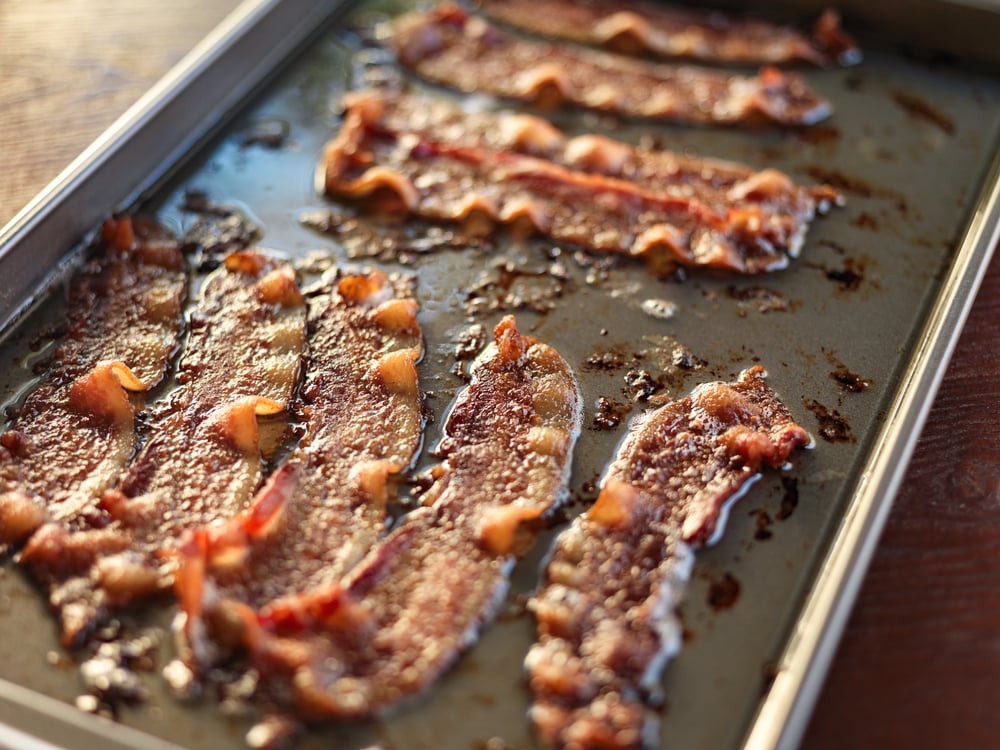 To reheat your oven baked bacon, put it on a plate in the microwave. You need to have a paper towel below the bacon and a paper towel on top. Reheat it in 10-second increments until it’s as hot as you want it. Another option is to reheat your bacon on the stovetop until it’s hot on both sides, or you can warm bacon in oven at 350 degrees Fahrenheit.

Try any of these side dishes or main dishes with bacon.

How do you bake bacon so that grease splatter doesn’t get all over the oven?
Bacon needs to be cooked in the center rack of the oven. If it’s too close to the heat elements at the oven’s top, the rendered fat will splatter and make a mess in your oven. The secret is to use bacon that’s cool so that it will slowly come to the correct temperature for rendering the fat. Don’t overload your sheet pan, especially if you’re cooking with thick or extra-thick bacon that has more fat. Also, lining the baking pan’s edges with an inch of aluminum foil will help prevent the bacon grease from splattering over the pan’s sides. 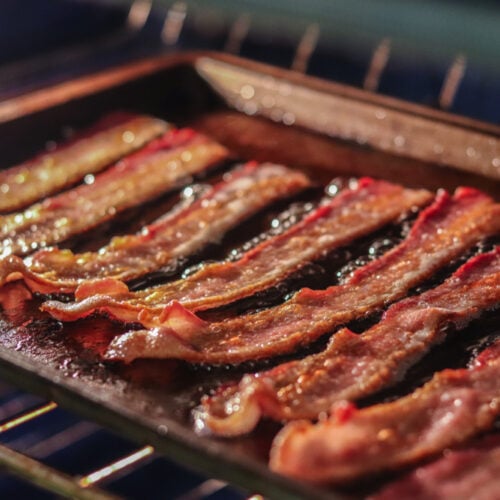 How to Cook Bacon in the Oven

Cooking bacon in the oven gives you straight, even strips that are either crispy or chewy, depending on how you like your bacon. Follow these steps and baking methods to get perfect bacon every time.
5 from 7 votes
Print Recipe Pin Recipe
Prep Time 5 mins
Cook Time 25 mins
Total Time 30 mins
Course Breakfast
Cuisine American
Servings 8
Calories 92 kcal

Storing Cooked Bacon: You can refrigerate cooked bacon strips for up to a week in an airtight container. You can also freeze cooked bacon strips to pull out for future meals or recipes. Freeze your bacon in a zippered freezer bag for up to 6 months. Reheat Your Bacon Strip: To reheat individual bacon strips, wrap a bacon slice in paper towels and microwave it in increments of 10 seconds until they're hot. Bake Bacon at 400 degrees Fahrenheit (204 degrees Celsius): If you want to cook your bacon at 400 degrees Fahrenheit (204 degrees Celsius), follow the directions above, but flip the bacon strips after they've been cooking for 10 minutes. If you put the bacon strips directly onto the sheet pan, it takes between 12 and 19 minutes to cook. If you cook your bacon on a wire rack, your bacon will be cooked in about 19-27 minutes. The timing depends on how thick the bacon slices are. Save the Bacon Grease: Bacon grease is wonderful as a flavorful cooking fat. When your baking sheet has cooked completely, but the bacon grease is still liquid, pour it into a Mason canning jar or bowl. We recommend pouring the greatest through cheesecloth and a fine mesh sieve to remove the little bits, but this isn't completely necessary. Bacon can be stored in the fridge for up to 3 months or frozen indefinitely.

Calories: 92kcalProtein: 3gFat: 81g
Keyword How to Cook Bacon in the Oven
Tried this recipe?Let us know how it was!