Learn five ways you can cook the most magnificent lobster tail you’ve ever tasted. I’ll show you all the popular cooking methods, such as steaming, boiling, broiling, baking and grilling.

Maine lobster is often considered among the most exclusive, elite-type of seafood that most people reserve mostly for special occasions at those fancy, high-end restaurants.

With lobster, the abdomen or tail is considered the most valuable section because it contains the most meat. And when it’s dipped in hot melted butter, lobster is truly a blissful culinary celebration. 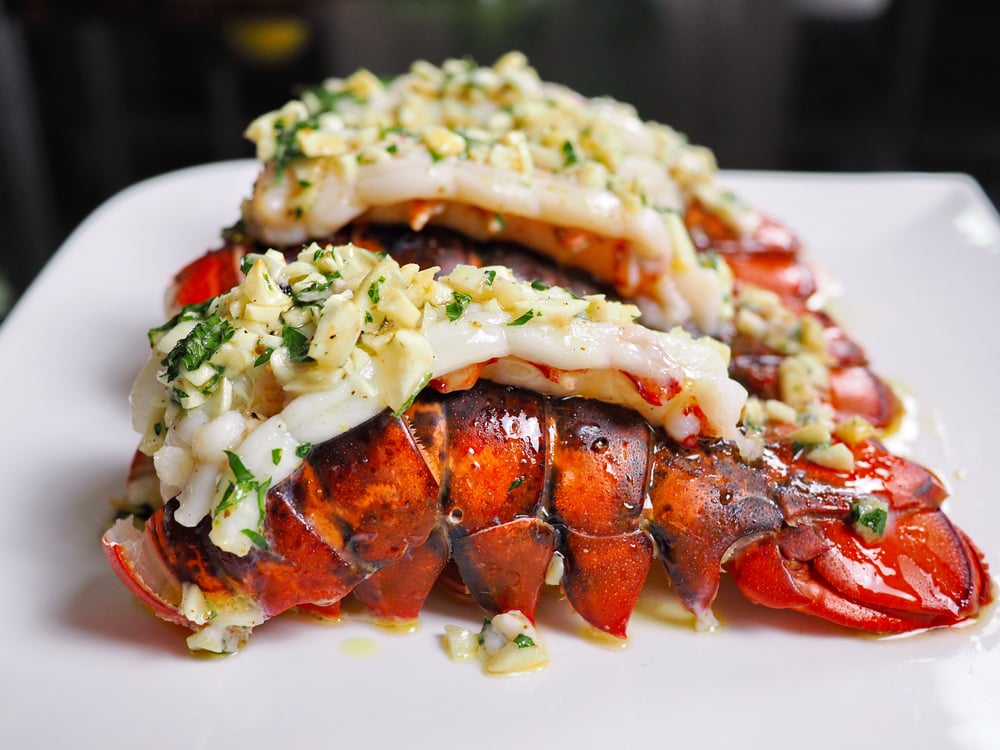 Cooked lobster has a slightly briny and sweet taste. This is because their muscle fibers are long and surrounded by tough connective tissue, much like the muscle structure of shrimp and their smaller cousins, crawfish.

And thankfully, despite their tough exterior shells, lobsters are big softies inside, meaning they cook up just as fast as other types of crustaceans and fish. However, if lobster is overcooked, the meat can become rubbery and tough.

Cooking lobster tail at home can seem a bit intimidating, but today you’re going to learn a few easy tips for preparing, seasoning, and cooking lobster using any of the five methods of your choice. Let’s dive right into a few tips below!

The Methods of Cooking Lobster Tail 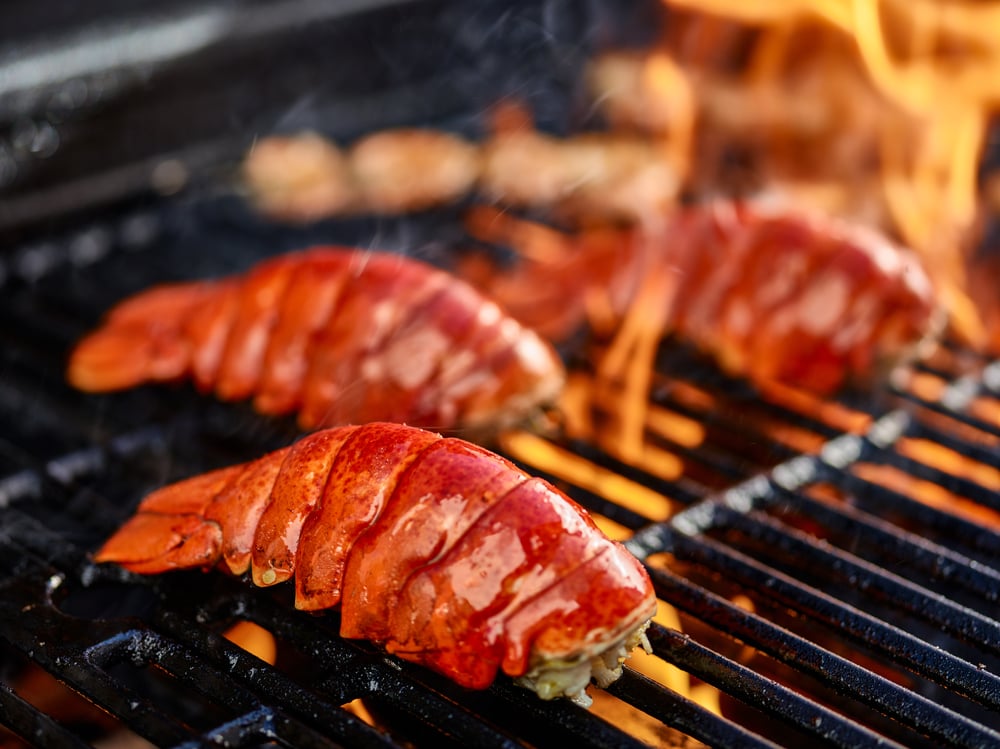 To thaw frozen lobster tails, you can leave them in the refrigerator overnight or immerse them in cold water for a half-hour. If the frozen lobster tail is large, you should drain the water and replace it with fresh after the initial 30 minutes. Keep repeating the process until the flesh is pliable and free of frost.

Wash and dry the tails before beginning to prepare. Once the meat is visible, look for a dark line, which is the digestive tract. To complete the process, remove it and give it a quick rinse.

How to Butterfly Lobster Tails

The most exquisite way to cut and serve a lobster tail is to butterfly it. Carefully slice down the center of the tail and open it up, leaving a small piece of the tail fin connected.

Then, the succulent lobster meat is placed on top of the shell, making it look as if they were never separated.

Seasoning the lobster can take its flavor to the next level. Before cooking, you can brush the meat with butter and season it with an array of aromatics, such as garlic powder, paprika, salt, pepper, or your favorite herbs. For grilling, broiling, or steaming, give it an extra layer of flavor by adding spices to the melted butter.

Cook whole lobster tails in water that  has been salted and has come to a boil. While boiling does a good job of tenderizing the lobster meat, it can also affect the flavor. So adding salt to the water makes a huge difference.

Preparing a lobster using steam is a quick process. The intense heat of the steam cooks it in a matter of mere moments. The succulent meat can be retained in the shell, cut open, or even placed on top.

However, this method doesn’t bring out the lobster’s flavor, so additional seasoning is often necessary.

To bake lobster tail, prepare by slicing them in two with a razor-sharp blade. Place the cut flesh on top in an oven-safe dish, sprinkling with a little liquid.

Divide the tails in two or split them lengthwise and arrange them on the baking sheet. Place it a short distance away from the broiler’s heat.

The intense heat will give the broiled lobster tail a beautiful golden brown tone. The cooking time is brief, so constantly check for doneness. For every ounce of lobster, it should take approximately a minute.

Grilled lobster tails have amazing flavor! Prepare lobster tails by either slicing them in half lengthwise, exposing the tail meat, or splitting them into butterfly shapes with the flesh facing up. To prevent curling, a skewer can be passed through the center.

If butterflied, leave the flesh side up for the duration to give the grilled lobster tail a smoky charred flavor. For incredible flavor, try cooking them on a cedar plank.

How You Can Tell Lobster is Finished Cooking 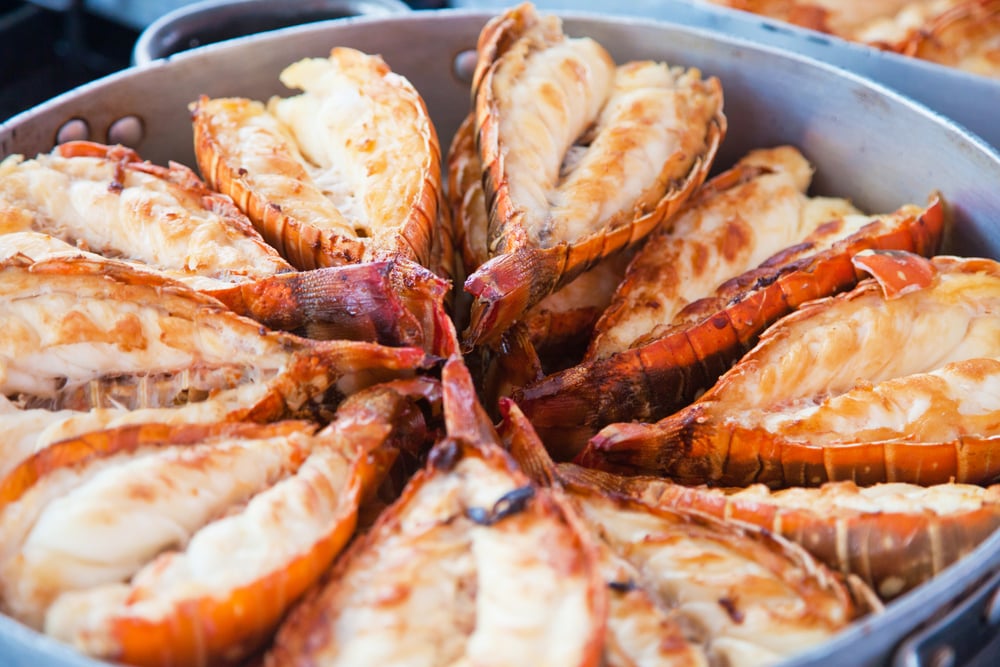 To ensure the lobster is cooked perfectly, stick a thermometer into the thickest part of the tail and wait for the temperature to reach 135-140ºF.

Once it does, the shell will be a vibrant red, and the flesh will have changed from see-through to white and firmer. Then it’s time to dig in!

Things You Can Serve with Lobster

After cooking, roughly half of a lobster tail’s weight is actual edible flesh. Generally, bigger tails indicate more meat, although the yield can vary depending on the season. For a single serving, 3-10 ounces is a perfect size. 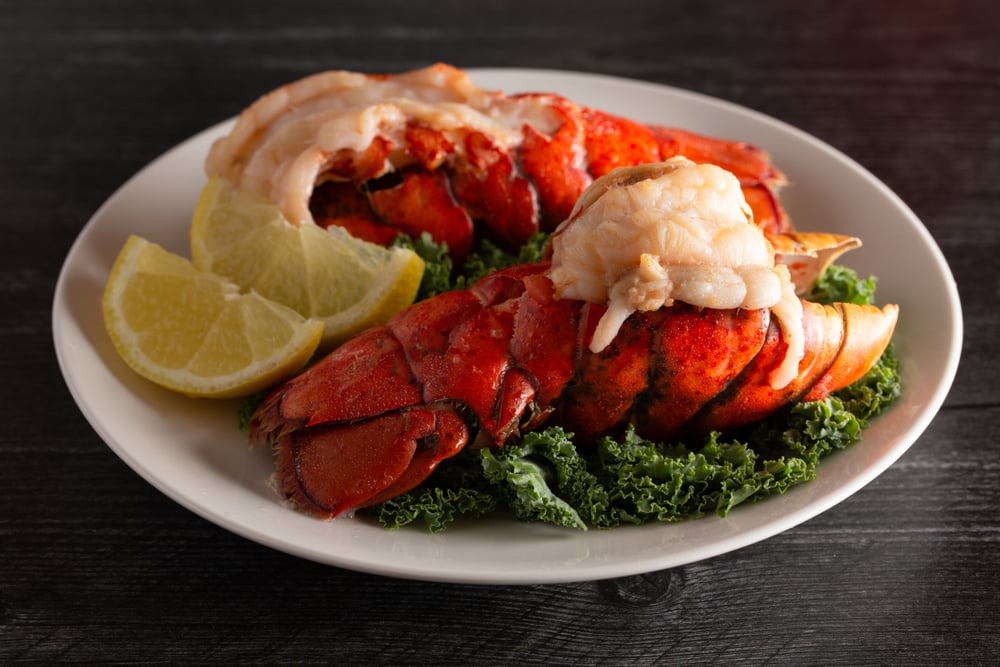 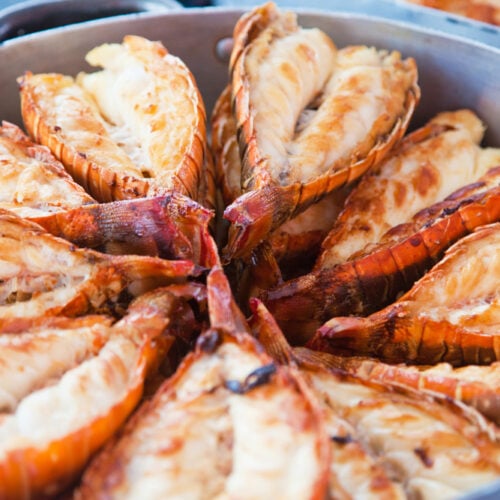 How to Cook Lobster Tail

For an in-the-shell presentation, use kitchen shears to snip off the top of the lobster tail, stopping right before you reach the fin. To cut the tail in half, take a chef’s knife and slice it lengthwise down the middle so that you have two portions. Make sure to take out the darkly-veined digestive tract before you rinse and dry the tail in preparation for cooking. To ensure the lobster is cooked thoroughly, the internal temperature should reach between 135-140ºF. The exact cook time will vary depending on the method used and the lobster size.