Pepperoni is one of the most popular pizza toppings in America. It is an accumulation of meat and seasonings in the form of a salami sausage, giving off a slightly smoky and very meaty flavor.

Contents show
Is Pepperoni Italian?
Origins of Pepperoni
So what is pepperoni made of?
Ingredients
How is Pepperoni Made?
Curing Process
Dry Curing
Equilibrium Curing
Brine Curing
Sausage Curing
Curing Facts
Related Posts:

But what is pepperoni and how is it made? Here’s a gastronomic answer.

Despite most assumptions, pepperoni is actually Italian-American and was never invented in Italy, unlike other forms of salami.

‘Peperoni’ is the Italian word for bell pepper, and ‘peperoncino’ means hot and spicy peppers. This is most likely where the word ‘pepperoni’ actually derives from, as the first use of this word referring to salami sausages was back in 1919.

If you ask for an authentic pepperoni pizza in Italy, there’s a chance you may receive something completely different to what you expect!

This meat was actually invented in New York City by Italian butchers and pizzerias who came to the city at the beginning of the 1900s.

Pepperoni began as an accumulation of spicy sausage recipes, and was considered an exotic pizza topping until gas ovens became popular in the 1950s. 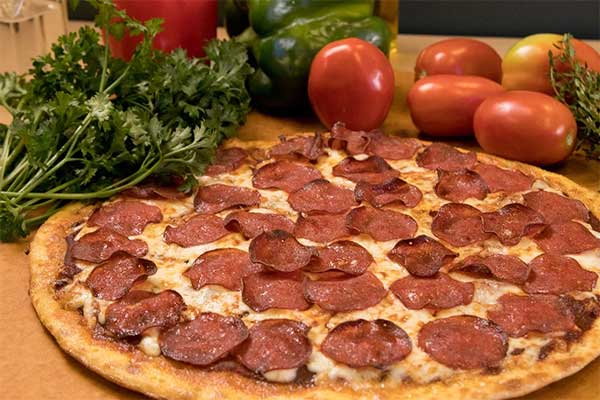 Cured meats have existed for centuries, as they can be preserved without refrigeration.

Back in the days of the Roman Empire, the Romans would cure meats with seasoning and spices to prevent having to catch their meat daily.

There is even evidence of cured meat existing as far back as 40,000 BC according to cave paintings in Sicily. These cave paintings suggest that evaporated salt from the sea water and ash was used to dry meat.

As time continued, curing meats has been a popular form of food preservation. In Europe, countless variations of sausages were created with this form of preservation, including the spicy red meats in Italy which inspired the making of pepperoni in America.

So what is pepperoni made of?

We all know the taste of pepperoni. It stands out for its smoky and slightly spicy flavor that works wonderfully with pizza. The texture is fairly soft, not chewy, and is finely-grained.

The pepperoni sausage itself is made of minced beef and cured pork along with other spices. It follows a curing process, which shall be explained later.

It can technically be made with other meats including turkey, but this does affect the authenticity of the taste.

Most pepperoni sausages are made in the same way, any other ingredient changes are labelled.

In America, if pepperoni has been made with turkey meat, this must be stated.

The main ingredients of pepperoni include:

The salt and sodium nitrate are included for the curing process, and the nitrate is involved to give the distinctive red color.

How is Pepperoni Made?

Curing is an old-fashioned process of preserving meat that has existed since as early as the Roman Empire, and potentially even earlier than that.

Curing is most effective for thinner meats as they cure faster, and therefore have a longer shelf life. If you are planning to cure your own meat, we have the best ways to do this.

You will need to weigh your meat first - this figure needs to be recorded as it will be an indicator of when your cured meat is ready after the process.

Dry curing is the most traditional method of curing. You will need a large container with salt in the bottom, and then you will need to put the meat on top of this with another layer of salt over the meat.

It will need to be refrigerated for 24 hours. You will know if the meat is cured when it has lost between 35-40% of its original weight - hence why recording the original weight is so important.

This method is more modern and is the easiest for curing at home. The amount of salt you need has to be equivalent to 3% of how much your meat originally weighs.

The surface of the meat will then be layered with that salt, and then the meat needs to be sealed tightly. This will sit in a refrigerator for around 5 days, and then you will need to weigh it to see if it is cured properly.

Again, it should lose around 35-40% of its original weight.

Brine curing is as simple as submerging the meat into salt, and then keeping it refrigerated.

This method is best for bringing out the flavor, and can be combined with the dry curing method.

This method is all about sodium nitrate.

The ground meat must be mixed with sodium nitrate to cure effectively.