An ideal accompaniment to just about any meal, or just wonderful as it is with some butter, bread is beloved globally. But it doesn’t just appear in one standardized form!

Although we typically use it to fill with other ingredients, as the sturdy vessel that makes or breaks a sandwich, there are so many other reasons to enjoy bread, and a whole world of options to check out.

Today we’ll be taking you on a journey, exploring the various iterations of this doughy dish with different examples from all over the world.

Prepare to seriously step up your lunch game. 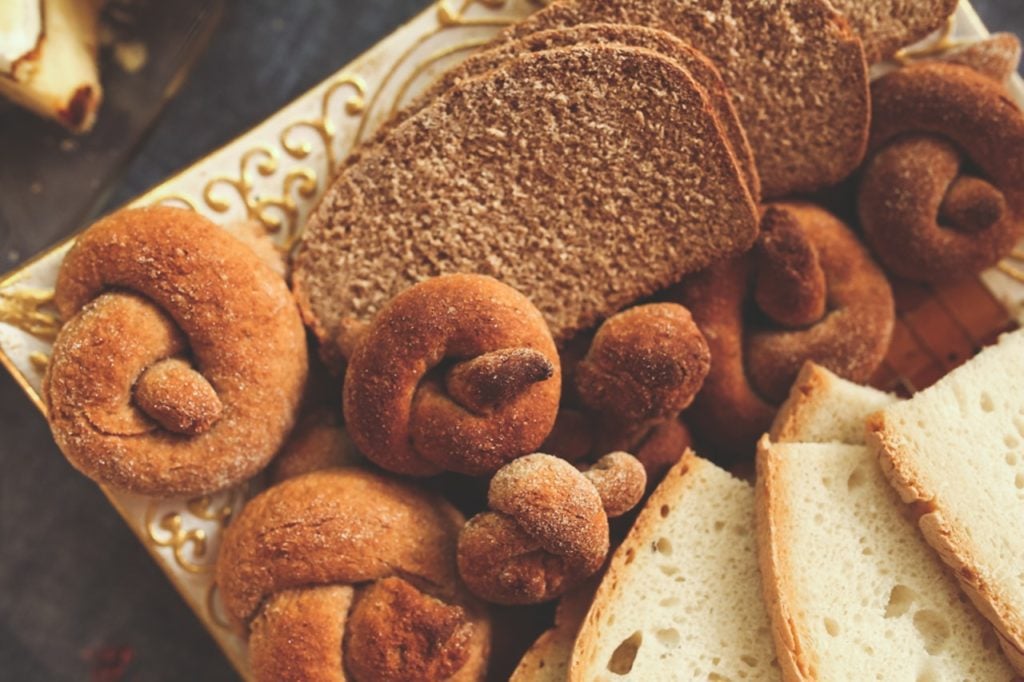 Where Did Bread Come From?

With origins as far back as the Neolithic period - otherwise known as circa 10,000 BC - what began as a caveman treat has been totally transformed into the sliced, bagged lunchtime savior we recognize today.

Starting with flour and adding varied ingredients, it can be made with various methods: typically, your loaf will be leavened or unleavened, which basically refers to whether it contains yeast or not and therefore if it’s going to rise!

Common choices for a base include barley, oats, rye, corn, sorghum and spiked millet, though baker’s choice is typically wheat flour.

Crusty on the outside with a soft, fluffy and delicate interior, it’s no surprise it’s still popular today. Firstly, let’s examine some of the more commonly enjoyed breads in Europe and across the USA - these will probably be more familiar to you.

A Look At Some Traditional Loaves

About as basic as you can get - it’s often used to describe simple, plain things! - and made from all-purpose flour (or one specifically for bread), this is an easily sliced, compact bread and is perhaps the most popular household choice in America.

Usually encompassing a mix of several flours, from whole-wheat and rye to all-purpose, with added seeds and wholegrains for additional texture, this is a bread that delivers extra fiber and vitamins.

Known as wholemeal across the pond in the UK, this bread is darker in color and made from wheat flour.

As it’s healthier than the average loaf, it has risen in popularity in the last decade, and more families are turning to it for their sandwiches.

Especially popular on Instagram, this is the influencer’s loaf of choice, though it requires much more effort and patience to prepare.

As a result of the fermentation process, it’s slightly sour in taste (the name gives that away!)

So called for its primary ingredient, also referred to as ‘brown’ bread colloquially, this bread is made by combining bran and wheat germ with the rest of your usual ingredients.

Supposedly a European notion, rye bread is a combination of wheat and rye or strictly rye flour, with a stronger flavor and a darker, gingerbread-like color.

You’re more likely to enjoy this in France, Germany or Russia.

Originally created in Poland, but now found in countries across the world, with sweet and savory flavors, these doughnut-esque treats are a delicious choice, traditionally paired with salmon and cream cheese. 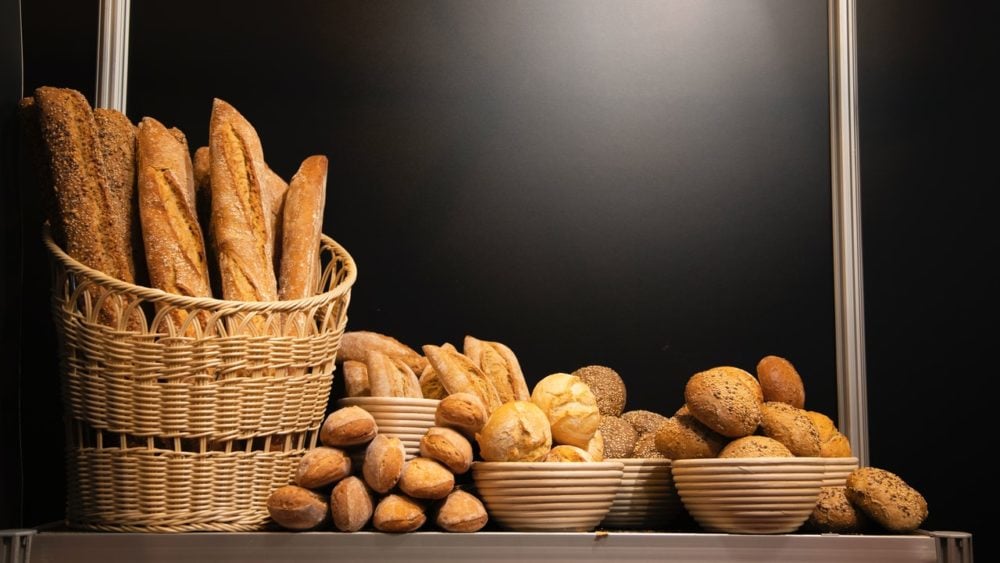 Special Selections - Bread From Around The World

Now that we’ve reminisced over some of the more recognizable types of bread, lets examine what other countries and cultures have done to put their own interesting twist on this chameleon-like food.

Usually found accompanying a curry, this flatbread is baked in the oven and makes an incredible dipping vessel.

We love filling it up with marinated, tender chicken and fluffy rice, to enjoy pitta style.

It’s also excellent to stuff or infuse with other flavors and ingredients: the world is your oyster.

Popular alternatives include garlic and keema, but maybe don’t put oysters in your naan bread…

Traditionally prepared in the wilderness of the Australian bush, cooked on the boiling hot coals of a dying campfire, this loaf is still replicated in ovens across the continent.

Following an especially basic recipe, all you’ll need is flour, water and salt, though you might want to add in a dash of milk and some baking powder to serve as a raising agent.

Paired perfectly with a thick stew or enjoyed with cooked or cured meat, it’s a versatile yet stodgy dish. It’s well enjoyed on the continent though!

Serving to represent the manna that fed the Jews when they were exiled from Egypt, the plaited, egg-washed bread known as Challah is usually enjoyed on the Sabbath and other Jewish holidays.

Slightly sweet and served golden, you will often find it incorporated with raisins, or topped with crunchy sesame seeds. Broken and shared, it’s a bread that represents faith and love!

Small and super cute, the cheese buns that are thoroughly enjoyed across Brazil, as well as a multitude of other South American countries are made from corn flour or cassava, also known as tapioca.

Gluten-free and infused with eggs for a fluffy interior, they require no leavening agent but still rise up beautifully, and your celiac friends and relatives can enjoy them too. What’s not to love!

It would be remiss of us not to mention this Native American staple, invented when the Indians were relocated to reservations by force and only had rations of flour, sugar and lard to live on.

Creatively transforming those three simple ingredients into a delicious staple, this authentic dish is fried and can really bump up a Thanksgiving table.

You could add in some cinnamon or a half cup of pureed pumpkin for a more appropriately Autumnal take on this dish!

Another flatbread that’s soared in popularity after humble origins, this Italian treat is made from strong flour with plenty of gluten, in combination with yeast, salt, oil and water.

Usually found as a side dish and occasionally utilized as a base for really fancy pizzas, it’s found all over artisanal bakeries in the USA.

Especially known for going great with extra salt and paired with even saltier olives, with a high oil content, it can be quite an extravagant indulgence. Try not to eat too much of this seductive treat!

Yeah, this is more of a crunchy sidewalk snack than a tasty roll to be dipped in soup, but pretzel bread is an iconic loaf worth more than just grabbing and eating to go.

Try taking a leaf out of the German book and rolling yourself up a batch of pretzel dough into a roll or stick shape - to be honest, it can be whatever shape you’d like.

Either way, it’s going to be delicious. Add salt, or cinnamon, or chocolate, or peanut butter (you get the picture) and tuck in!

Risen with sourdough but remaining distinctively flat, Injera hails from Ethiopia, and is usually the serving dish or platter for the rest of an Ethiopian family meal.

Its unique and somewhat chewy texture is great for scooping up other ingredients, completely eradicating the need for cutlery and plates.

Though somewhat different to the standard eating etiquette in Western countries, at least nobody will argue about who has to wash the dishes!

Also found in Venezuela and other South American countries, this flat and circular bread roll is reminiscent of a burger patty in shape and size.

Whether baked, grilled or fried, they require a specific type of pre-cooked corn flour, which is paired with salt and a little water.

Typically sliced and filled with black beans, shredded chicken or beef, cheese, avocado and other tasty choices, they are another gluten free choice that families are sure to adore.

Plus, they’ll be much more flavorful than your usual celiac-friendly choices!