If you’ve never been to Germany, you might not be familiar with the world of German breakfasts. You’ve come to the right place to learn.

Everyone is familiar with German food classics such as weiners and sausage, but the fact is that German breakfasts are also very famous and deserve attention. German culture revolves around a hard day’s work, and when you’re working long and hard days, you need a solid morning meal. These German breakfasts look great!

In this article, I will explore 15 traditional German breakfasts. So, next time you feel like getting experimental in the kitchen, you have some of these breakfasts in your back pocket.

So, let’s get started.

A Farmer’s breakfast is a typical German breakfast. This breakfast allows you to celebrate simple ingredients, and is full of hearty ingredients that are sure to set your day up right!

This recipe is packed full of protein from the eggs and the cheese to ensure your energy levels are up and to keep you going throughout the day.

The sliced potatoes are cooked in the pan until crisp before the onions are added to soften.

The egg mixture along with the herbs get poured right over the top and left to cook. Add a sprinkling of smoked cheese, and season to taste.

While pancakes are often associated with American culture, they taste absolutely delicious wherever they are made, and German pancakes are no exception!

These German apple pancakes are better known as Dutch babies in America. Rather than a stack of individual pancakes, these are baked as one pancake and sliced when served.

This recipe involves softening semi-sweet apples in butter, cinnamon, and sugar in an oven-proof dish. Following this, the batter is poured over the apples until it is set.

Slice up the apple pancake for breakfast with bacon and a generous helping of syrup!

Homemade bircher muesli is healthy, hearty, and convenient to make in the mornings.

Once a batch of this nutritious muesli is prepared, you need only grab a bowl and add milk!

This recipe celebrates a variety of different ingredients. It contains grated apples and applesauce, oats, and raisins, is beautifully spiced with cinnamon, and has beautifully nutty notes provided by the nut butter.

When you’re ready to serve, top the oatmeal with the fresh apple, a splash of milk and a yummy drizzle of honey.

This recipe can also be made plant-based and vegan by using plant milk such as almond milk.

This is an old German dish that is bursting with flavor and is great to use up your eggs and a few other simple ingredients.

Cooked in butter with a sprinkle of salt and green onions, the potatoes will be deliciously crispy on the outside while remaining tender on the inside.

The eggs are mixed with milk and cooked in butter for a creamy taste. When the eggs are set, the potato mixture is spooned onto one side of the omelet and the other side is folded over the filling.

To pack more protein into this recipe, add some bacon rashers, breakfast sausage, or meat of your choosing with caramelized onion for a beautiful combination of flavors.

What’s not to love about cake for breakfast? This German apple custard cake, also known as Apfelkuchen, is loaded with fruit and is an easy breakfast option to prepare.

This cake is delightfully moist and has a beautiful texture, thanks to the custard layer and scrumptious apples throughout.

Combining the festive flavors of apple and cinnamon with vanilla custard and heavy cream, this dessert is warming without being too rich.

The custard is poured over the cake to lock in that moisture, and to complement the beautiful apple flavor.

Serve it with your morning coffee for a sweet and tasty breakfast.

Potato pancakes, commonly known in Germany as Kartoffelpuffer, are a tasty breakfast food that any potato lover would write home about!

These pancakes are made with finely grated potatoes, onion, egg, flour, and sea salt.

It’s important that the potatoes are finely grated, as this ensures they cook quickly and evenly.

The trick is to drain and squeeze the potatoes of any liquid remaining. If you skip this step, the pancakes won’t get that gorgeous golden crisp edge.

Kartoffelpuffer can be served sweet or as a savory pancake. Most commonly they’re served with applesauce or fruit compote, and are dusted with powdered sugar.

Hopple Popple is traditionally an egg casserole made with leftovers from the refrigerator to make a warming breakfast perfect for the whole family!

This recipe involves sauteing onions and peppers in olive oil until soft before eventually adding garlic.

The leftover meats and potatoes are browned, before the onion mixture is added back into the skillet. Following this, an egg and cheese mixture is poured over, it is seasoned to taste, and then baked until it is set.

If you often find that you are throwing away food that has gone bad, this recipe is perfect to use up any leftover ingredients before it’s too late!

German eggs in mustard sauce is a perfect recipe to make if you have any leftover hard boiled eggs.

If you are partial to egg salad or deviled eggs, you’ll love a hard or soft boiled egg paired with a rich, creamy mustard sauce.

The sauce is made with a variety of ingredients, but the bulk of it comes down to vegetable stock and flour, along with mustard, heavy cream, lemon juice, and dill.

These eggs work perfectly with a green salad and a side of roasted or boiled potatoes.

This wouldn’t be much of a breakfast article without mentioning German waffles! The batter has a subtle sweet flavor and crisps up beautifully in a waffle iron, and is a great vegetarian dish.

These sweet waffles taste delicious on their own and don’t need to be drenched in syrup. However if you wish to add something to this recipe, they work with a variety of toppings including whipped cream and berries, berry compote, or a drizzle of syrup.

You can also cook a large batch of these German waffles and store them in the freezer. Simply pop them in the toaster when you want to eat them!

Apple cinnamon kaiserschmarrn falls somewhere between a crepe and a pancake. These pancakes are a delicious German recipe you can serve for breakfast, brunch, or a sweet treat if you’re feeling hungry.

There are a variety of different recipes and variations of this sweet dish, and it is highly versatile! The batter is made up of eggs, milk, sugar and flour that has been whisked until it is smooth.

These yummy treats can be topped with various ingredients, including powdered sugar, a drizzle of chocolate sauce, and fresh berries!

Baked and served like a quiche, this recipe uses a pre-made potato salad for its base.

If you can’t find the same thing, you can par-boil your own and use them in place.

The eggs are then whisked with light cream and salt and pepper vigorously until the mixture is smooth. Fold in cheddar cheese, pour the egg mixture onto the potato base, and top with bell pepper slices and scallions for a dish that is truly special!

German semolina pudding is a beautifully creamy and rich dessert made out of semolina, vanilla sugar, milk, and salt.

Some people think of semolina pudding as a less expensive version of rice pudding, as it has a similar taste and texture.

It usually has a porridge-like consistency and tastes super creamy alone, but even better with a dollop of something sweet, such as jam or Nutella.

In Germany, it is often eaten with an apple cinnamon topping and made with sweetened milk.

You can also add half cinnamon stick, lemon peel, or a vanilla bean for a stronger flavor when making this dish.

This recipe is a recipe that is Germany’s answer to the cinnamon bun, called the Franz bun.

This sweet treat is equally, if not more delicious than a cinnamon bun, as it is made out of a yeast dough that is fiddle with a sugar-cinnamon mix that is nothing short of mouthwatering!

While these Franz buns are baking, the filling caramelizes at the surface and gives the bun its characteristic crispy, sweet and sticky taste and texture.

Trust me, once you try this recipe you’ll never bre able to stop making them!

Like many other European countries, Germany also has a variety of breakfast pastries, one of which is known as German chocolate crescent rolls.

This pastry is known as Schokoladenhörnchen in Germany, and is a delightful pairing with your morning coffee. This particular pastry has a similar flavor to a chocolate croissant, although the texture is slightly different and less flaky than you would expect of a French pastry.

While they are often eaten for breakfast, you can also have it as a snack or after lunch.

If you’re looking for an indulgent breakfast on a cozy weekend, then this is the recipe for you!

Planning a quick and easy meal doesn’t mean that you have to compromise on flavor, and these German pan-fried potatoes and eggs are living proof of that.

Although this is a simple dish, it packs a punch and is absolutely delicious!

It involves cooking sweet potatoes until soft. Saute the onions in a skillet, before adding the potato slices and frying them until brown. Season to taste with salt and pepper.

Add the eggs and fry them to your liking before garnishing with fresh parsley.

And there you have a quick, simple, but filling breakfast! 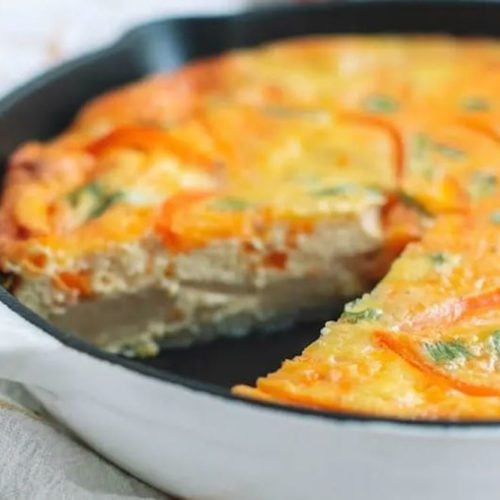 These recipes are sure to please. So, gather your family and friends and enjoy. Let us know your thoughts!
5 from 5 votes
Print Recipe Pin Recipe
Total Time 34 mins
Course Breakfast
Cuisine German
Servings 4
Calories 311 kcal