Ukraine is often referred to as the “breadbasket of Europe” because of how much the Ukrainian people value wheat and grain – a staple in Ukrainian cuisine due to their historical relationship with it.

Traditional Ukrainian dishes are derived from ancient peasant meals that made use of plentiful grain resources such as rye, as well as essential vegetables such as potatoes, cabbages, mushrooms, and beetroot.

The cuisine is also heavily influenced by the rich dark soil (chornozem) from which many ingredients hail from.

These dishes incorporate both Slavic and European influences – a result of years of foreign occupation and jurisdiction. 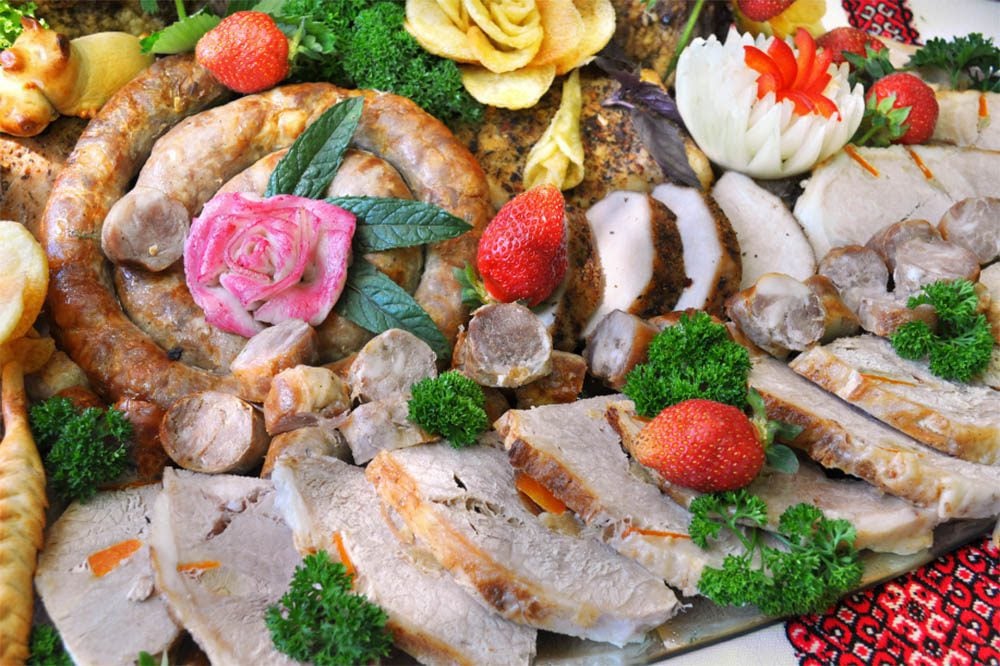 Ukraine is the second-largest country in Eastern Europe, after Russia, which it borders to the east and northeast.

Ukraine also shares borders with Belarus to the north; Poland, Slovakia, and Hungary to the west; Romania and Moldova to the south; and has a coastline along the Sea of Azov and the Black Sea.

Many Ukrainian dishes are popular in Russia and other Eastern European countries, and some are even enjoyed in English-speaking countries, too.

Like any country, the most important and influential dishes of Ukraine will differ from person to person, but there are a few key foods that are undeniably quintessential Ukrainian dishes, for example, Borscht, Paska, and Varenyky.

In this article, we’ll be taking you through the 10 most popular Ukrainian foods. No doubt that by the end of this list you’ll be researching Ukrainian recipes or seeking out your local Eastern European store!

So let’s get started… 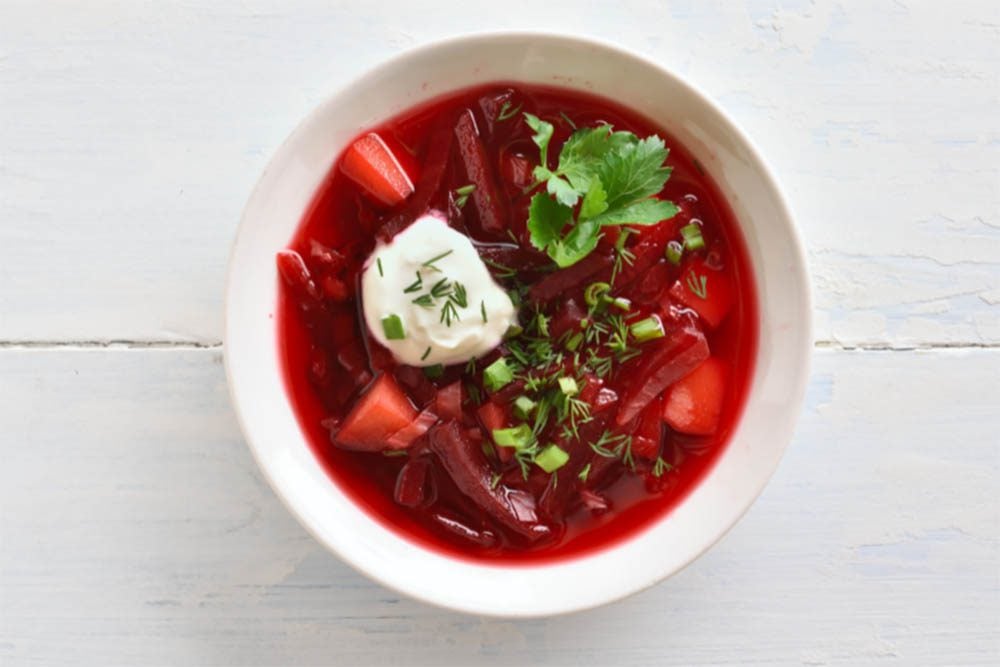 We had to put Borscht at the top of our list.

Adored by both vegetarians and meat-eaters alike, Borscht is a hot beetroot soup that is usually red in color, though there is special spring borscht that is green in color, too.

Borscht is cooked in broth and uses chicken, fish, or another kind of meat for meat-eaters, or is prepared without for vegetarians.

It’s usually served with a dollop of sour cream or plain yogurt, with a side of delicious garlic doughnuts.

It is typically made using a large number of beets – usually sour beets – which are combined with meat or bone stock and sautéed vegetables such as cabbage, carrots, onions, potatoes, and tomatoes.

It can also be served either hot or cold; and it may be served up as a hearty one-pot meal, a clear broth, or a smooth drink.

Borscht is possibly the quintessential Ukrainian dish – it’s eaten during the holidays, as a weekday meal, or even for occasions such as funeral wakes. 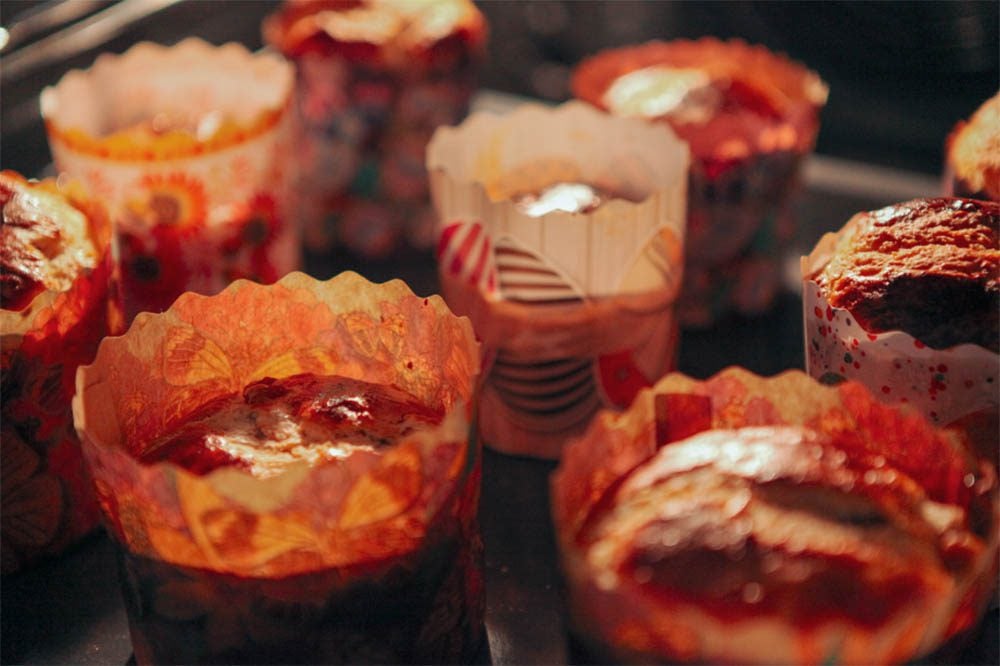 Paska, which means “Easter”, is a Ukrainian Easter bread tradition that is also prominent in countries with Eastern Orthodox religious or cultural connections to the ancient Byzantine Empire.

On Easter morning, the goods are blessed at the church, and everyone returns home to feast on the paska, eggs, cold meats, and other goods.

Paska can be found in most Ukrainian homes around Easter time, as well as markets throughout the country.

Modern paska usually has a white glaze made from sugar and egg and is sprinkled with colored wheat grains or poppy seeds.

However, in Ukraine, it is also a tradition to create dough ornaments – based on the theme of spring – for the paska.

It’s also an old custom for the cook to whisper positive thoughts to the dough while working on it – this is meant to achieve the most delicious result. 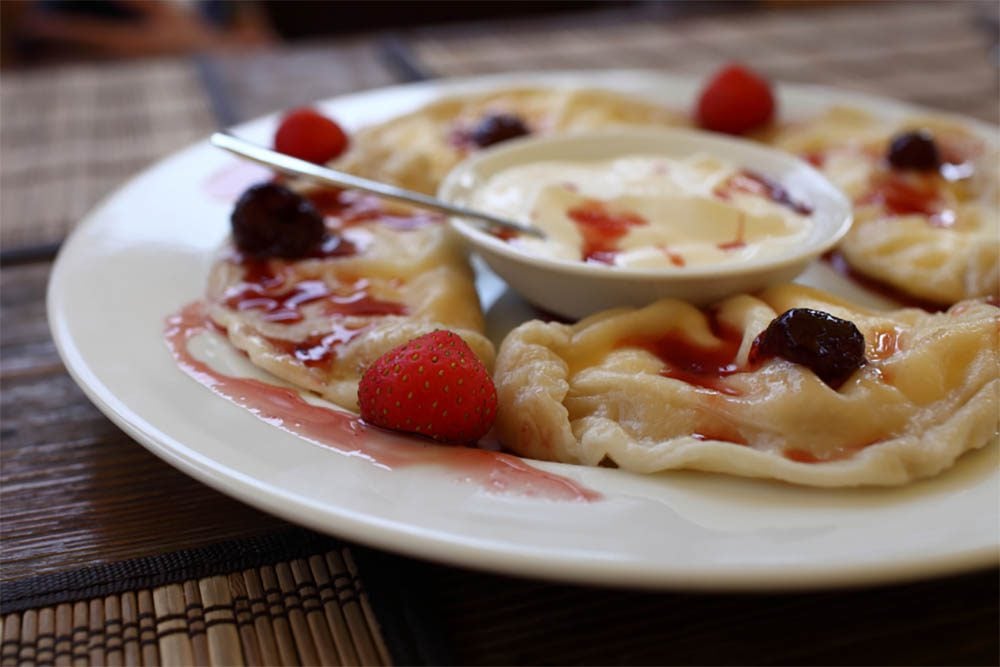 Shaped into squares or half-moons, Varenyky are popular Ukrainian dumplings that are filled with a variety of ingredients, from vegetables to meat, cheese, sauerkraut, eggs, mushrooms, or even fruit.

They’re usually boiled or steamed, drizzled with oil or melted butter, and served with a generous helping of sour cream.

Varenyky are very time-consuming to prepare, even though the fillings are so simple.

You’ll often find this popular dish in small Ukrainian villages or food festivals in the city, and the fillings range from simple options like cottage cheese, mashed potatoes or sauerkraut, to more adventurous flavors like olives, pumpkin, nettle, or even strawberries.

They can also be purchased ready-made in Ukrainian supermarkets, and these frozen Varenyky will take just 10 minutes to boil. 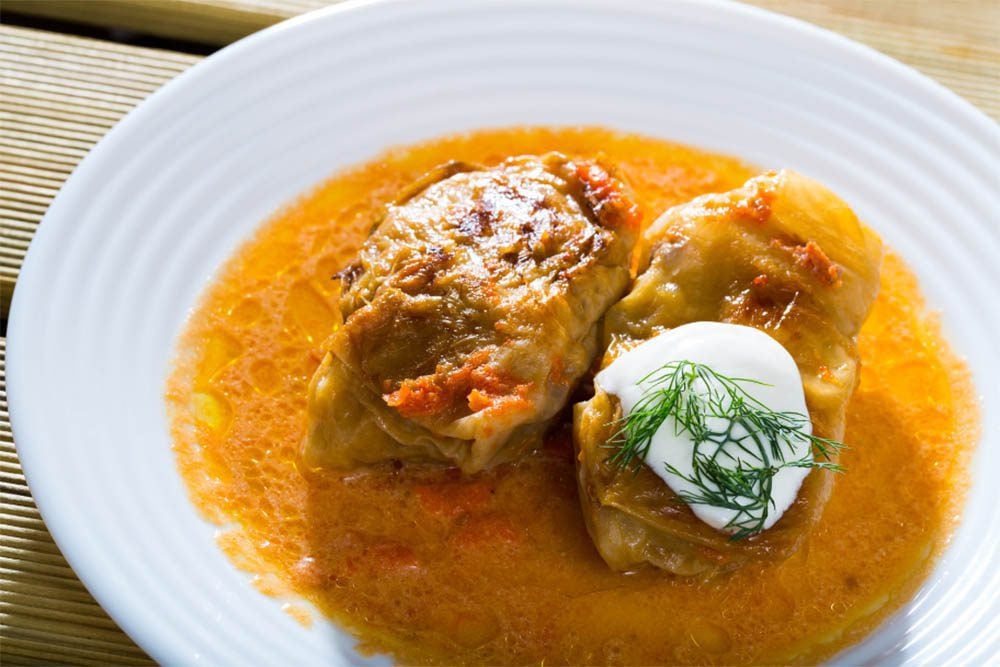 Holubtsi is a classic Ukrainian dish consisting of boiled cabbage rolls. Each leaf of the cabbage is wrapped around cereal and meat to make a new roll, though some variations of the dish use vine leaves instead of cabbage.

In the Carpathian region, corn grits are usually used, whereas in the Poltava area buckwheat is preferred.

You’ll also find Holubtsi stuffed with vegetables such as carrots or mushrooms; they’re usually lightly fried and then stewed with tomato and sour cream or some other sauce. 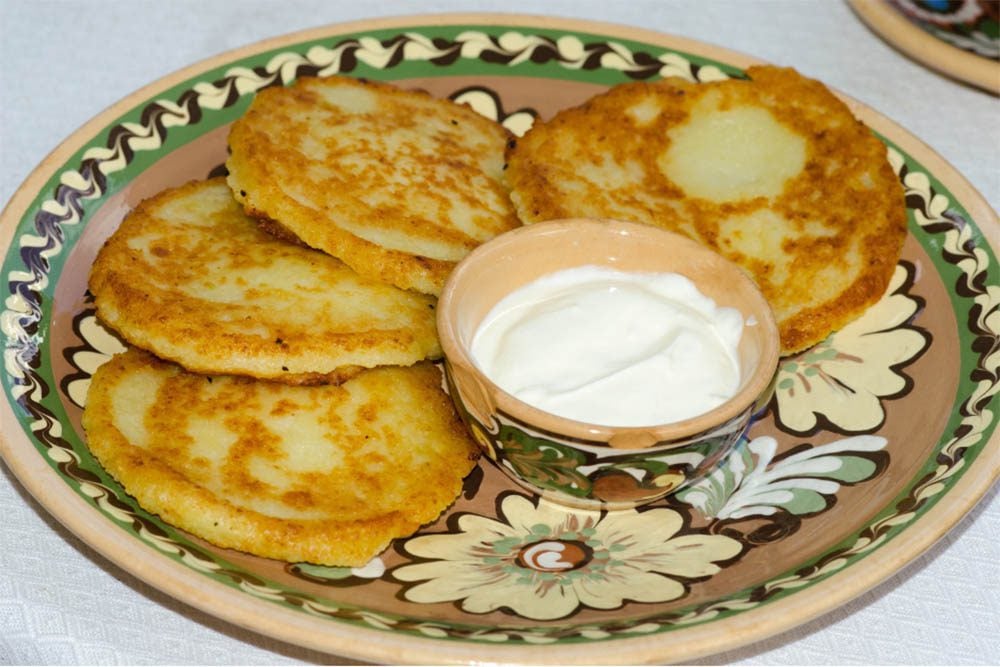 Popular in the north of Ukraine, Deruni is shallow-fried pancakes made from grated or ground potato, matzo meal or flour, and a binding ingredient such as egg or applesauce.

They’re often flavored with grated garlic or onion and seasoning and are served with sour cream or yogurt.

In Ukraine, potato pancakes are often enjoyed as a Sunday dish, usually eaten for breakfast or dinner. Indulgent and comforting, this simple dish is a Ukrainian favorite. 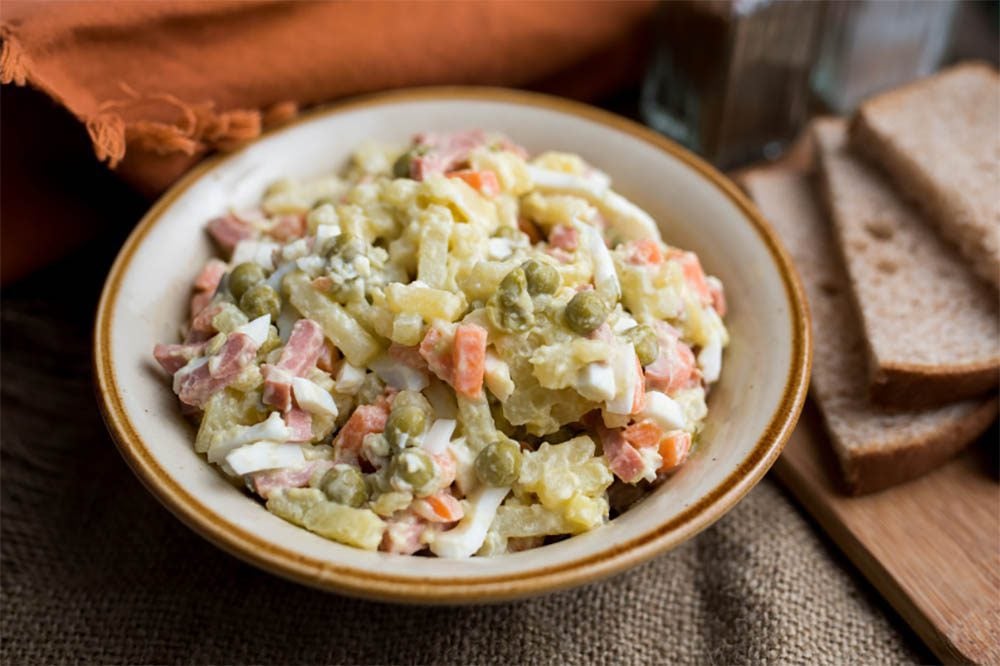 Salads are a culinary staple in Ukraine as they have traditionally always been made from simple ingredients that are abundant in the country.

Ukrainian salads usually consist of fresh or salty cucumbers and sauerkraut with onions and oil.

The Olivier potato salad is one of the most popular Ukrainian salad dishes and is found at any party or gathering.

This dish can also be found in Russia, though the ingredients will differ depending on the home or restaurant.

Staple ingredients include a meat of choice, potatoes, hard-boiled eggs, and peas. The variations are with onion, cucumbers, and sour cream instead of mayonnaise.

The dish became popular during the Soviet Union when a cheaper version was created to replace the expensive original version of the salad, which is said to have been named after a Belgian chef who created it in the 1860s at a restaurant in Moscow. 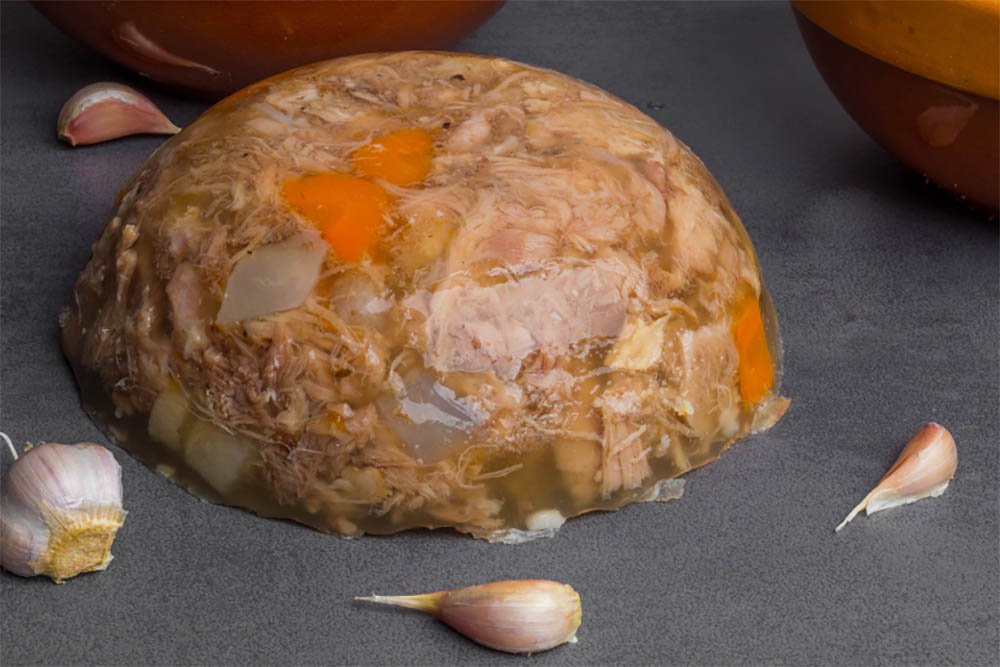 One of Ukrainians’ favorite cold dishes – but not so popular among foreigners – is holodets or aspic.

It’s traditionally made from fresh pork leg, which is cleaned and washed, then boiled for a long time (6-7 hours) to form a meat jelly.

Traditionally this thick jelly is flavored with garlic and spice and is served in Ukraine at winter festivities and Easter.

Similar dishes are also popular in Russia and other eastern European countries. 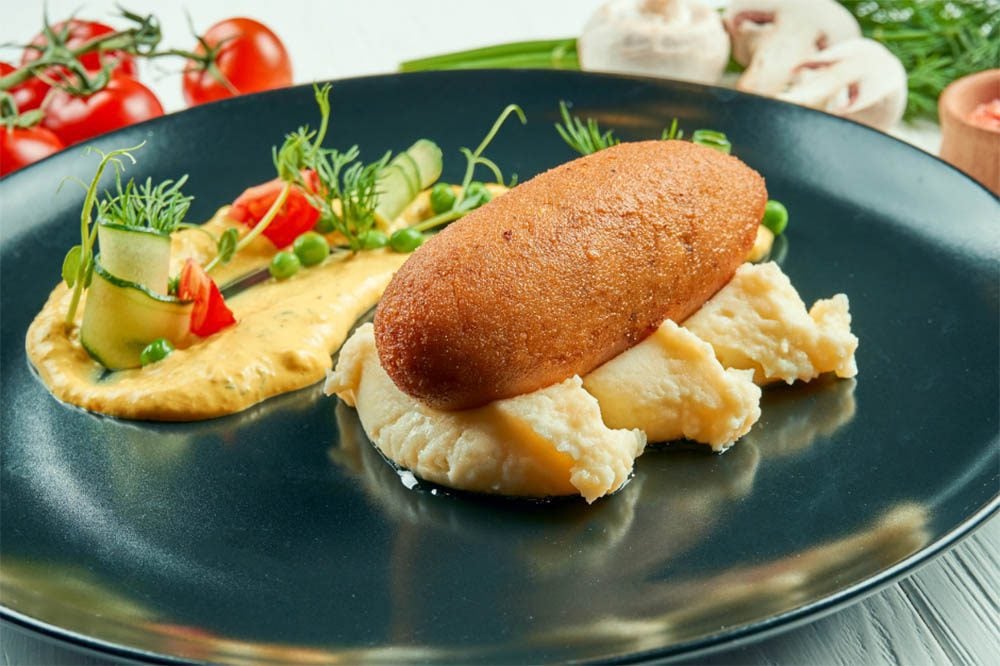 A popular dish in Ukrainian restaurants, as well as at schools and government canteens too, Chicken Kyiv is popular throughout the west but originally hails from Ukraine.

It usually consists of a chicken fillet that’s been pounded and rolled around in cold butter, then coated with eggs and bread crumbs, and either fried or baked.

In western variations of the dish, garlic butter is usually used, while in Ukraine and Russia regular butter is used, and herbs such as parsley and dill are added to the butter. 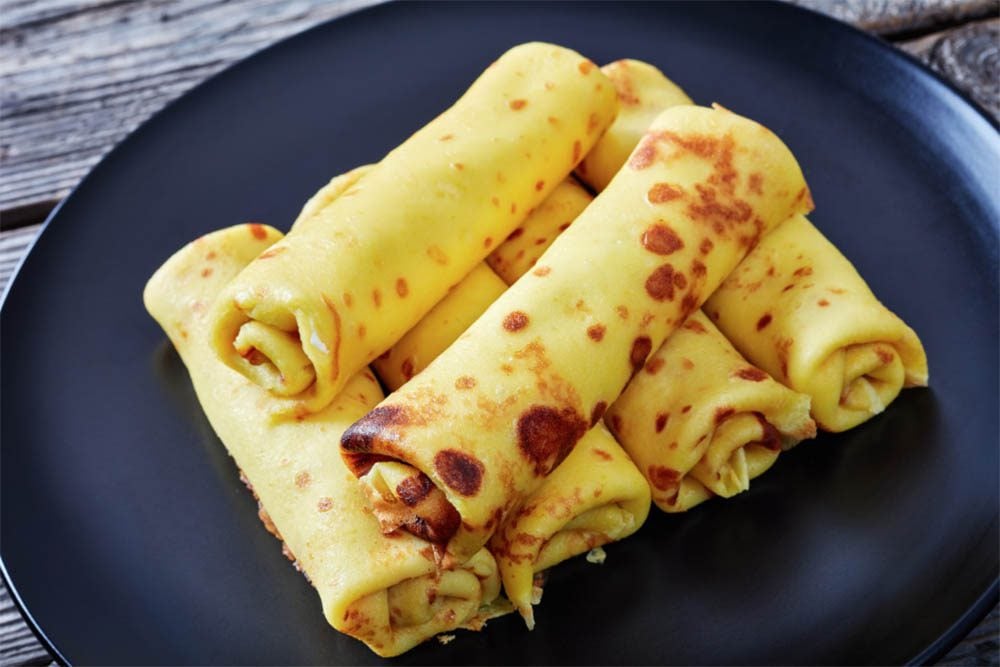 Nalesniki are delicate crepes filled with cheese and dill, smothered in sour cream, and baked in the oven.

Mushrooms are also a popular filling, as well as sweet variations consisting of canned berries or sweet cottage cheese.

Traditionally, Ukrainians use wheat, buckwheat flour, or cornmeal to prepare these delicious pancakes, and they’re usually eaten at the end of the main course but before the dessert.

This is also the most popular dish for Shrovetide, the Christian period of preparation before Lent. 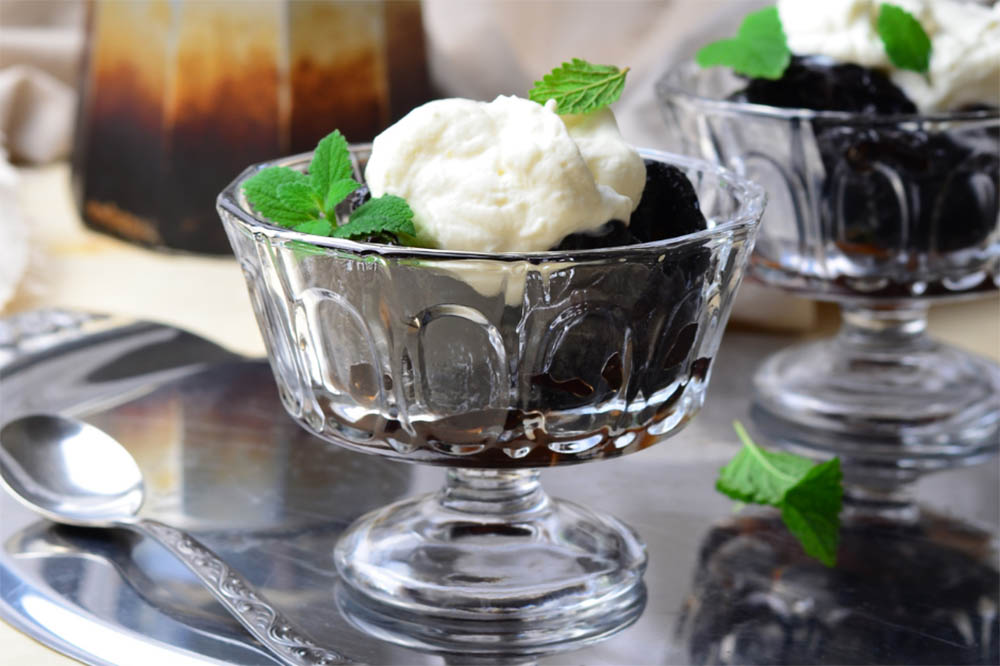 A popular sweet treat at Christmas and New Year, this simple dish is one that takes many Ukrainians back to their childhood.

This dessert is made by stuffing prunes with walnuts and drizzling them in a sweet cream made from sugar and sour cream.

The dish is sometimes sprinkled with shredded chocolate for decoration and is either served immediately or placed in the refrigerator for a couple of hours for the cream to thicken.

The ingredients for this dish are affordable and widely available in Ukraine, so it’s easy homemade comfort food.

Ukrainian cuisine is full of comforting dishes, from hearty bowls of borscht to crispy potato pancakes or sweet walnut-stuffed prunes.

The best Ukrainian dishes are the ones that have strong historical links to the country’s past and make use of the widely available ingredients in the country.

Many of these dishes are widely available across Ukraine and are enjoyed both at home and in restaurants. 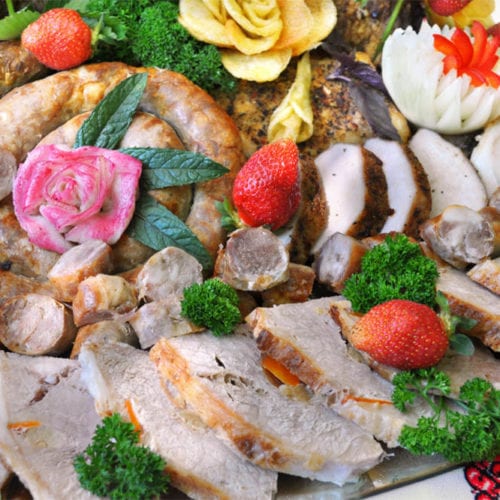 The Most Popular Ukrainian Dishes (With Photos!)

These recipes are sure to please. So, gather your family and friends and enjoy. Let us know your thoughts!
5 from 1 vote
Print Recipe Pin Recipe
Total Time 34 mins
Course Breakfast, Dessert, Main Course, Side Dish
Cuisine American
Servings 4
Calories 235 kcal