Dry mustard is a fantastic and versatile ingredient used most prominently for delicious rub blends.

Mix it with some paprika, and sage for some dynamite chicken, combine it with some dill, salt, and brown sugar for some delectable fish dishes, or pair it with thyme, rosemary, and ground black pepper for preparing a juicy cut of beef. 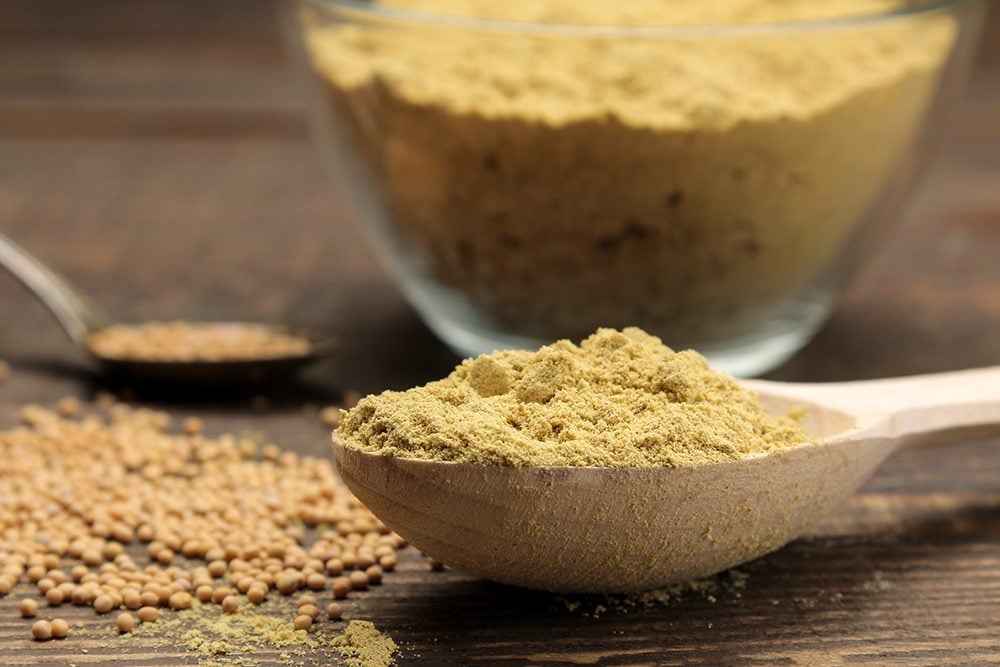 Amazing as it is, though, it’s undoubtedly one of those ingredients that often gets overlooked, forgotten at the bottom of those shopping lists, lost to the black depths of the very back of your dry store.

This is why it helps to know of a few ingredients that can fill its shoes in its absence.

You’re perhaps even less likely to have a jar of full mustard seeds lying around than you are to have the powder itself, but technically speaking, they are the most suitable replacement for their powdered contemporary.

The reason for this is that once they’re ground up, they literally are dry mustard! They’re not the most practical of ingredients.

You’ll need at least a pestle and mortar to grind them up sufficiently, and that will take time and effort, but if you’re dedicated to that unique mustardy kick, you won’t mind.

If you have a spare coffee or spice grinder, you’re in for an easier ride, as they’ll get the job done in no time.

Just remember to give any coffee grinders a thorough clean afterward, otherwise, that morning coffee won’t just shake the dreams off, it’ll set them on fire along with your sinuses.

Before your start throwing any old amount of your expertly ground seeds into your dry rub or meal, you should know that different color seeds have different strengths.

Dry mustard is usually yellow, so that’s probably what you’re used to using. Yellow seeds have the mildest flavor of the three seed types, brown mustard seeds take things up a notch, and black seeds are the spice kings of the mustard world.

If you’re using brown or black seeds, make sure to reduce quantities.

Let me preface this by saying, you may be able to get close to the desired flavor with wet mustard substitutes, but there will always be a distinctive difference to the final product, so don’t expect any miracles.

If you don’t necessarily need your mustard to be dry, the best match for the flavor of powdered yellow mustard is Dijon mustard.

Dijon is perfect for use in marinades, sauces, or as a glaze for veg and meat - carrots, broccoli, and chicken in particular.

While it’s not actually made of yellow mustard seeds, rather brown and black, the dilution with vinegar, white wine, and salt reduces their Scoville level to roughly that of yellow seeds.

It is sweeter than dry mustard, though, so it may be a good idea to reduce the sugar content of the recipe elsewhere. Reducing any lemon or lime juice is a good way to do this.

Dijon is also most likely going to be slightly less potent than dry mustard, so if you’re trying to match it in terms of strength, you could add half a teaspoon more of the prepared dijon than you would dry mustard.

English mustard is incredibly hot, but that’s not to say it lacks flavor. On the contrary, it’s actually teeming with it.

Mixed with flour, salt, vinegar, and turmeric, it’s slightly more viscous than other mustards, so a little bit goes a long way in a wet recipe.

English mustard cuts through particularly well in cheese sauces but doesn’t pair well with tomato, so if you’re making something like cauliflower cheese, perfect!

It’s going to really lift the sauce and provide that cheesy yellow color. If, on the other hand, you’re making a lasagne, it’s best to use a standard cheesy bechamel.

Used to color and flavor English mustard, turmeric isn’t a total outsider to the mustard game, but it’s a farsight from the dry mustard you’re accustomed to.

It does resemble dry mustard in that it’s yellow and usually powdered, making it perfect for giving a meal the right look, but its taste is starkly dissimilar.

The most significant difference between dry mustard and turmeric is that turmeric isn’t spicy, so if you plan on using it as a substitute, try and up the spice levels in your meal by some other means.

Turmeric also has a very subtle but distinct flavor. Rather than dry mustard’s explosive in your face tang, it’s quite floral, vaguely reminiscent of traditional Turkish Delight.

A neat little trick you can do to light a bit of a fire in your turmeric is to blend it with other more incendiary spices. The idea is that you find one with a fairly transparent flavor and a high Scoville rating.

Cayenne pepper is a great option. It does have a flavor but the spice level far exceeds it. Mix it by degrees to make sure you don’t take things too far.

If you’ve ever had prepared horseradish before, you’ll have instantly noticed its similarity to prepared mustard, from kick to flavor.

So, it’s a long shot, but if you have some horseradish powder lying around, it’s an awesome substitute for use in dry rubs, especially if you’re avoiding mustard due to an allergy.

Horseradish powder has more of a punch than typical dry mustards so perhaps don’t use quite as much in your blend.

If you’re a vegan, you’ll most likely know that you can’t have prepared horseradish, not because it has horse in it, but cream - but the good news is that horseradish itself is a vegetable, so you can have horseradish powder.

Wasabi powder is one of the best replacements for dry mustard because it tastes so similar and even causes the same nasal reaction that mustard does when you put too much in your mouth.

Sometimes dry mustard is even used as an ingredient, so make sure to double-check the label if you have an allergy.

It tends to have a bit more oomph in terms of spice, so be aware, and reduce the amount you use in your recipe

This might make no sense to you, and honestly, it didn’t make much sense to me either, but when you do a little research, you’ll discover that most mayonnaise recipes include a whole bunch of dry mustard.

Now, mayonnaise should really be a last-ditch effort in mustard substitution, but it’s good to know that there’s a common household item up to the task when absolutely necessary.

There you have it, mustard masters!

Something about each of these ingredients makes them to a degree a good substitute for dry mustard, but remember, sometimes substitution isn’t the best course of action.

I love mustard as much as the next guy - more even - but sometimes the best thing for a meal is to just let the mustard go.