Tasso is a spiced, cured, and smoked ham that is a specialty added to many South Louisiana dishes and is often used in cajun style cuisine.

Unlike many other types of meat, tasso is typically eaten when added to meals rather than eaten on its own.

It also tends to be added to dishes in smaller quantities or used as a seasoning for soups or other dishes that could benefit from a kick of flavor.

Impressively, tasso only takes around 5 minutes to cook in a skillet and can then be stored inside a refrigerator if you have any left.

Outside of Louisiana, Tasso is particularly hard to come by and so you may often find yourself on the lookout for some great tasting alternatives.

If this is the case, you will be pleased to know that they are many great substitutes that can be used in place of tasso ham, and while they may differ slightly in taste, they share similar qualities when added to a meal. 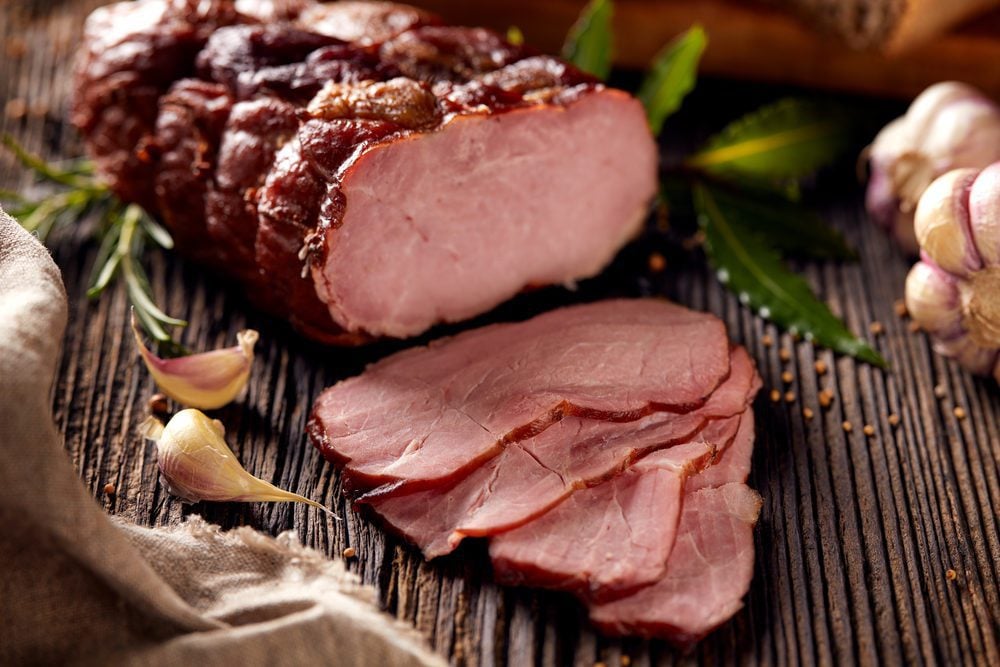 As mentioned Tasso is a smoked, spiced, and cured meat that is sourced from pork shoulder. Although this cut of meat tends to be fattier, it is packed with more flavor.

Because of the seasoning, it has a rather salty but spicy taste that makes it a great addition to meals when added in small amounts.

Typically, Tasso meat is added to gumbo, soups, gravy, and rice but can also be added to dishes that would otherwise be lacking in flavor.

Depending on how you are intending to use tasso it can either be left whole, chunked, or diced. Tasso also comes cooked so it is ready for use right away.

Preparing tasso is straightforward. First, the tasso is marinated, and then it is smoked. Curing then involves adding agents such as cloves, allspice, and onion powder before being left for a few hours.

After this, the joint is then rinsed before spices are rubbed along the surfaces. The meat then requires 48 hours to smoke before it is ready for consumption.

If you are on the lookout for some great tasso alternatives then continue reading to find out our top 5 recommendations of the best substitutes.

Chorizo is a type of Spanish sausage that is fermented, cured, or smoked. It can also be sliced and eaten without being cooked beforehand, or chopped up and added to your favorite dish to enhance the flavor.

Although it can be enjoyed uncooked, many recipes will require you to cook it beforehand.

Spicy chorizo provides the best alternative for tasso and this flavorsome version can be achieved by chopping the pork in coarse form and then seasoning it using salt or smoked paprika.

You can also use Portuguese chorizo which has fat, garlic, salt, wine, and a paprika flavor. Another option is Mexican chorizo which is made with native chili peppers however it is not smoked.

Because of this, you will likely find that the Spanish variation is the best option to choose should you decide to substitute the tasso for chorizo.

What better way of substituting tasso ham than replacing it with smoked ham. This ham is cut from the pork leg and is then cured with salt and spices which give it the smokey flavor.

It is then cooked steadily and a kiln is used to give it the smokey taste. Smoked ham is a convenient alternative that can be purchased in all supermarkets.

Some may not find it as spicy as tasso, however, you can solve this problem by adding seasonings to enhance the flavor. There are different variations of smoked ham that can be used depending on your taste preferences.

German smoked ham is said to combine a combination of sweet and smoky flavors closely resembling the taste of tasso.

Another option would be to smoke your own ham. You can simply buy the meat from the supermarket and then smoke and cure it using the seasonings that you would prefer.

Bacon is a cut of meat that is taken from the back, loin, or belly and it very much resembles the flavor and texture of ham.

Coming from a lean piece of meat it is very similar to tasso and it is a healthy alternative. Canadian bacon is cured and smoked hence the flavor.

This bacon is usually pre-cooked and pre-sliced into cylindrical medallions. Although the taste is smoky rather than spicy, you may wish to season it using ingredients such as garlic and pepper before, depending on the taste that you want to achieve.

Andouillette is a unique smelling sausage that is made from pork, onions, pepper, chitterlings, and wine with seasoning for more flavor.

It is a coarse-grained sausage that is typically pre-cooked, simply needing to be reheated before serving.

Some would suggest that andouillette has a distinct smoky but sharp taste. Because of this, it provides a great replacement for smoky and spicy tasso.

A coarse-grained sausage that is made from pork with garlic, wine, peppers, onion, and seasonings, Andouille sausage has a smokey taste and it is often associated with Louisiana Cuisine, very much like tasso itself.

This sausage is double smoked and is often quite spicy hence why it offers a good replacement for tasso, however, there are less spicy options available if you would prefer.

Should you wish to enhance the flavor of andouille sausage you can do so by adding your own flavorings and seasonings.

Finding a good substitute for tasso ham isn't likely to be too difficult. Many different types of hams or sausages share a similar smoky and spicy taste to tasso.

If you find that the substitute that you select lacks flavor or is milder than you were expecting, you can use your own flavorings and seasonings to make it smokier or spicier.

Although tasso availability is rather sparse outside of Louisiana, the substitutes that we have mentioned above are fairly easy to come by.